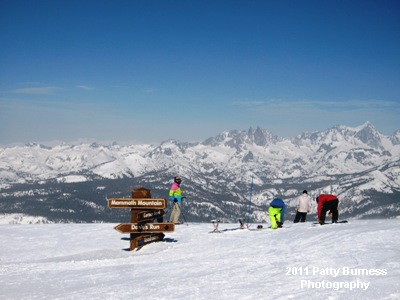 At more than 11,000 feet, Mammoth soars above California’s ski resorts. Instead of that sometimes long and grueling drive to Lake Tahoe, hop on a plane and in about an hour, you’ll be on the top of the world.

Last April, I flew to Mammoth Lakes. Spring seemed the perfect time to explore the area as a non-skier without the risk of getting snowed in. Approaching Mammoth from the air is spectacular. The landscape is the way Ansel Adams captured it in his photographs: frozen lakes and snow-covered granite peaks, including the jagged Minarets he celebrated. The Village at Mammoth Lakes is close to the airport and within minutes, I checked into 80/50, a private residence club. 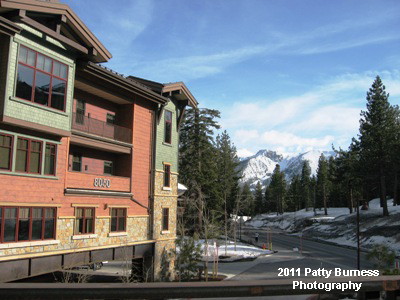 Ideally situated, 80/50 (named after the elevation) is surrounded by Mammoth Mountain and tucked under towering pines. My one bedroom was spacious (easily sleeps four) – modern kitchen, dining area, living room with fireplace, bedroom, den with sofa bed and two bathrooms (one included separate tub and shower). The interior blends with the natural beauty outside – rustic with earth tones in the flagstone, leather, wood, and other fabrics.

I headed to the top of the building and discovered an expansive deck with three hot tubs. It was luxurious to relax in the hot jetted water, mesmerized by the gorgeous view. 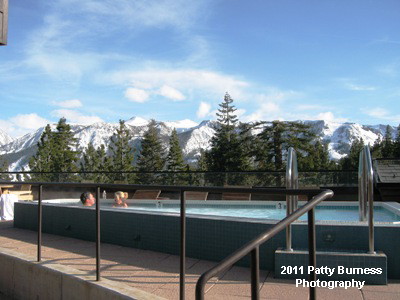 A colleague drove us to the Lakefront Restaurant at Tamarack Lodge overlooking Twin Lakes for dinner. Foodies and oenophiles are naturally attracted to the French-California cuisine, the international wine list, and the intimate setting. With the abundance of fish on the menu, we savored both seared escolar sashimi with fresh Oregon truffles and miso black cod and baby bok choy with a 2009 William Hill Estate Chardonnay, Central Coast. Not to be missed are elk medallions in a juniper blueberry sauce paired with the 2004 Rosenthal Cabernet Sauvignon, Malibu Estate. Save room for the lavender crème brulée. 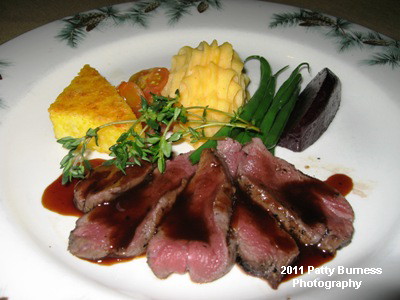 Next day, it was a short drive to Rafters, a Mammoth landmark since 1967. Its comfy, mountain-inspired interior showcases high ceilings, exposed beams and huge stone fireplace. The day started off perfectly as we shared mimosas, West Coast oysters, and banana sour cream pancakes with a side of thick maple wood-smoked bacon.

Afterward, I had a soothing massage at the Double Eagle Spa. Housed in the Snowcreek Athletic Club, it’s an oasis for stress reduction. Select from a menu of treatments and receive a complimentary one-day club pass for access to workouts, yoga, pools, and more.

Back in the Village, we strolled from end to end past shops, restaurants, bars, and the gondola that goes directly to Canyon Lodge (one of three lodges on the mountain). For lunch, we chose the Side Door, a popular wine bar and restaurant specializing in fondue, paninis, salads, and crêpes. Outside on the deck, we sipped 2007 Church Pinot Noir from Malibu Estate Vineyards and were among skiers, snowboarders, and nonskiers alike kicking back and enjoying the brisk air, blue skies, and mountain vistas. 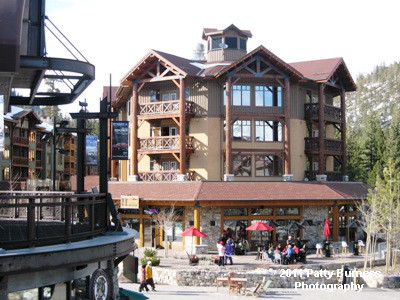 The Cross Country Ski Center at Tamarack Lodge offers rentals and lessons – all to take advantage of the region around Twin Lakes. More than 150 miles of trails offer something for every ability level. I strapped on snowshoes and was off. In one direction, I followed the Dome trail with fantastic panoramic views, and in the other, found beautiful paths around the frozen lakes. It was peaceful and invigorating.

Later, I sank into the hot tub at 80/50 and watched the sun set. That evening, I arranged through the 80/50 concierge for Chef Matt Toomey to cook in my residence. Matt is an engaging character. Appetizers included baked brie with a wild berry compote and ahi sashimi with tobiko caviar; the main course was a thick, juicy filet mignon with a mushroom sherry glaze and green peppercorns.

What a surprise to wake up to a snowstorm – one reason the ski season went past July 4th this year. (Mammoth is a paradise for downhillers.) Bundled up, I crossed the Village to the Old New York Deli & Bakery Co. for a cappuccino and one of their authentic NY-style boiled bagels. From there, I jumped on the complimentary Mammoth shuttle and headed up to the Main Lodge. I had hoped to get on the Scenic Gondola to the summit, but didn’t even get off the bus – visibility was close to zero.

At lunchtime, I wandered across the street to the Whitebark Restaurant for delicious sushi. The restaurant boasts an open interior with large hearth, recycled wood and open ceiling. The picture windows afforded the perfect view of the storm. The sushi was creative; the fish sustainable; and hot sake was the best accompaniment to the meal.

Then I learned the plane was not departing for San Francisco and I was stuck in a spring storm! I spent most of the day at 80/50 either reading by the fire or upstairs in the rooftop fitness room (watching the snow through the floor-to-ceiling glass).

Later that evening, I settled in at Petra’s. After tasting the food, it’s easy to understand why this cozy restaurant is popular. The yummy wild mushroom soup was made with seven different fungi and white truffle oil. The lump crab cakes were just that – big pieces of crab and little filler. The pairing of the flavorful 2007 Humanitas Syrah “Weed Farms” from Dry Creek was just right.

Up with the sun, I was eager for the Scenic Gondola ride. I grabbed coffee and yogurt from the rooftop lounge, then caught the bus to the Main Lodge. The gondola is fantastic – atop the 11,053 foot summit, there are stunning 360-degree views of the surrounding peaks. 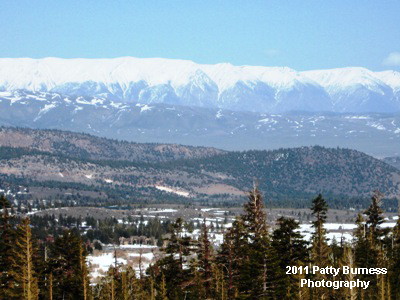 My one disappointment is that I never tried one of the natural hot springs located on Mammoth’s volcanic valley floor. They’re not easy to find, so be sure to ask a local who knows the secluded locations. Mammoth is a great winter escape. Grab your gear and have a mountain of fun!

Getting There: Mammoth Lakes, CA: About a one-hour flight on United Airlines. Mammoth Mountain is on the eastern side of the Sierra Nevada Mountains (in the Inyo National Forest).

Must Try: Pig of the Month BBQ: 866-416-9190. Create your own package of seasoned ribs and sauces from six regional styles. Easy and delicious. Prices: Check website.