Making It Through the Mud in Calistoga 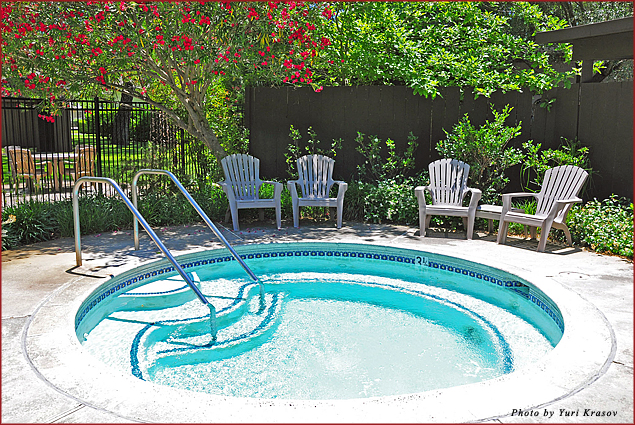 Traveling to Calistoga, California, I was not up to that muddy business everyone was raving about. When it comes to any kind of dirt touching moi or anything I’m wearing, I’m out of there. It might be pathological, but I am squeamish.

It took a lot of nerve and natural curiosity to finally try the world-famous mud baths in Calistoga. And, I had to do it in two steps – from a water-based thin mud that looked like diluted black ink to the thick blanket of pure muck – the kind you get stuck in somewhere in the back roads of Russia at the end of a rainy season.

Surprisingly, I enjoyed both.

I was drawn to Calistoga by its distinct AVA wines and its unique-for-a-Napa Valley-town character. Despite being part of the ultimate tourist destination – California wine country – Calistoga remains a charming hideaway, less crowded, less commercialized, and more open to leisurely pursuits of honeymooners, romantic couples of all ages, and other deserving vacationers.

A historical anecdote relays how the geyser town in the foothills of Mount St. Helena got its name. An early settler and founder of Calistoga, Samuel Brannan, wanted to make it a “Saratoga of California” in honor of the hot springs resort in New York, but for some reason mispronounced his words, and announced “Calistoga of Sarafornia” to the world instead. 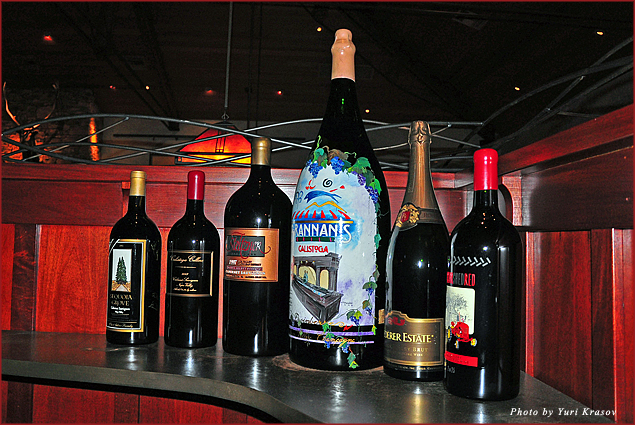 A century and a half later, the founding eccentric’s presence is widely felt in the town. Spacious Brannan’s Grill on the main drag occupies a corner building with large windows. Inside, the atmospheric and richly decorated bar and dinner hall serve classic cocktails, steak-house staples, and excellent local wines like Brian Arden Syrah from Masked Man Vineyard and Cultivar cabernet sauvignon – both produced in Napa Valley.

My Berkshire-Duroc pork chop was served with mustard greens, cannellini beans, and grain mustard jus, and was predictably good. My husband’s braised lamb shank with roasted garlic-infused polenta and sautéed Swiss chard was fork-tender and flavorful, so I had to have some of that, too. 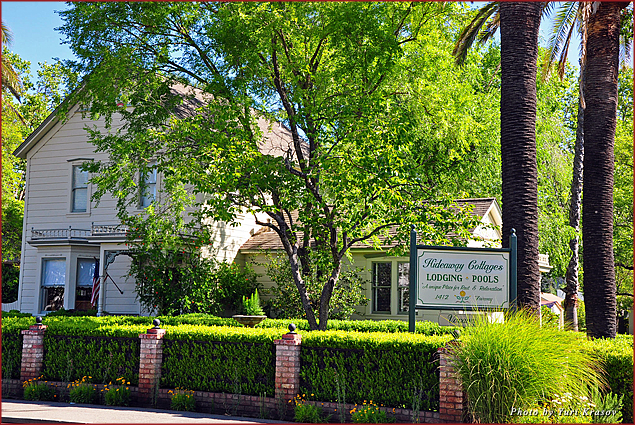 For the night, we settled in a charming little cottage with all imaginable conveniences belonging to Hideaway Cottages – a sister property of the popular Dr. Wilkinson’s Hot Springs Resort. I found out that our lodging was named very appropriately. Hidden among the trees on a side street, there was a real hideaway beyond the gate – a shaded alley lined with secluded white-walled cottages, each with a little garden in front of it. A sparkling swimming pool and a hot tub were kid-free and therefore endlessly appealing for us and other weekender guests – mostly couples.

All the cottages are named after beautiful cities of the world – Vienna, Paris, Berlin, and even Yerevan – the capital of Armenia, and Kiev – the capital of Ukraine. Our home for the night had a cozy, fully equipped kitchen with a breakfast nook, a family room with a big-screen TV, and the most luxurious bedroom with a plush bed. The hotel also provides a continental breakfast of coffee, fresh-baked pastry, and fruit. After breakfast, we enjoyed the mineral-water pool on premises, and that could count as exercise. We used the excuse to head to town for brunch. 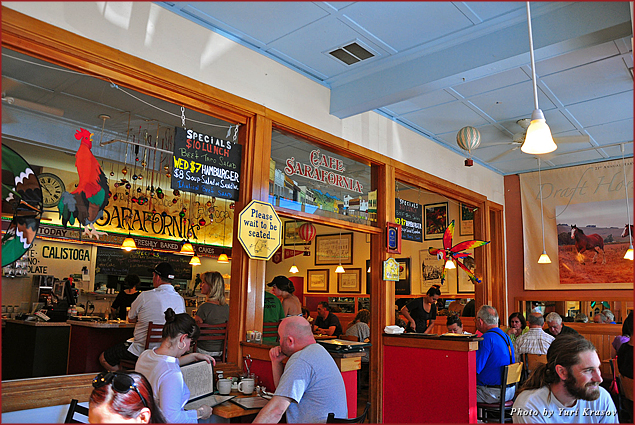 Café Sarafornia, named after Sam Brannan’s notorious line, has it written on the wall of its boisterous dining room. It also has a line out the door of people waiting to be seated, but the food is worth the wait. The oldest continuously run restaurant in the Napa Valley, Café Sarafornia serves lavish breakfasts all day long. My smoked salmon plate contained a good chunk of lox with capers, sour cream, and fluffy potato pancakes baked with red and green bell peppers. My husband, who likes his morning meal on the sweet side, indulged in cheese and apple blintzes with blueberry compote. 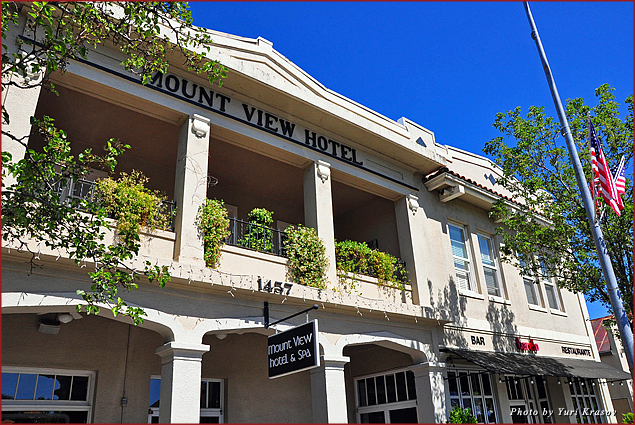 Calistoga, which has always been the major resort area, is known for its historic hotels. The Mount View Hotel and Spa maintains its century-old appeal, but attracts visitors with a fully redecorated fresh modern look and a secluded spa area with a heated outdoor pool. The hotel offers a number of romantic room and treatment packages for couples, and a list of specials for the area attractions. Friday nights at Mount View’s luxurious lounge are wine-tasting nights that sometimes turn into movie nights on a large screen TV.

At the Mount View Spa, my bathtub was filled with water-based natural mud packed with plant extracts, minerals and vitamins. It seemed non-threatening enough to enjoy by the candlelight until it was time for my massage and then unlimited swim in the sunny pool. That was quite a relaxing way to spend a Sunday afternoon! 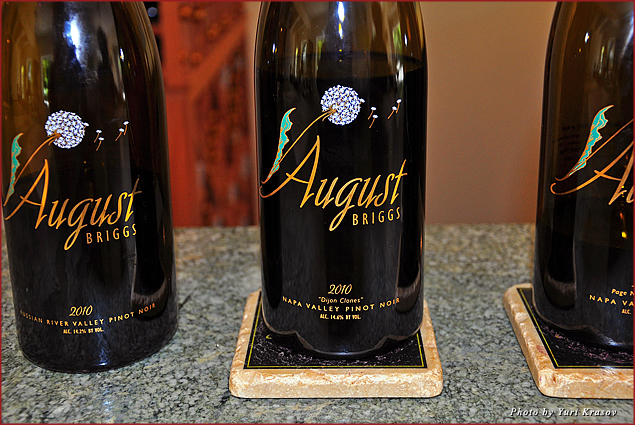 Next, I explored the local wineries conveniently located in downtown Calistoga. August Briggs is a very small producer that makes 13 to 15 different wines each year, with only five of them going into retail. Most wines come from a single vineyard in Napa or Sonoma, and four are from a vineyard in Calistoga. The best way to try August Briggs wines, embellished with a gold dandelion logo, is to come to the tasting room or join the wine club.

I tasted 2009 Russian River Valley Chardonnay – golden, buttery, and toasty, with aromas of citrus, caramel, and pear, and flavors of ripe melon, apricot, and sweet cream – only 201 cases produced. I also sampled the 2012 Leveroni Vineyard Carneros Chardonnay, which had great minerality and had only 193 cases produced.

Then there were some excellent pinots of Dijon Clones with their purity of fruit and complexity of aromas, and then Napa Valley Syrah and Petite Sirah with intense colors and distinctive flavors.

The 2009 Dry Creek Valley “Two Moon Vineyard” Cabernet Sauvignon impressed me the most with its layers of intense tastes from black currant to plum and dark chocolate.

I stopped at the legendary art gallery called Ca’Toga, solely dedicated to the multi-media art of Carlo Marchiori. Drawings, watercolors, acrylics, ceramics, bronze sculptures and murals overwhelm the gallery floor, walls, and its vaulted ceiling, creating a full-immersion experience in the midst of whimsical imagery delivered with high technical execution.

I could have spent a couple of hours at the gallery studying its many wonders, but I decided to plan another visit that would include a Ca’Toga Villa Tour of the artist’s residence filled with Roman ruins, statues, fountains, and trompe l’oeil frescoes. 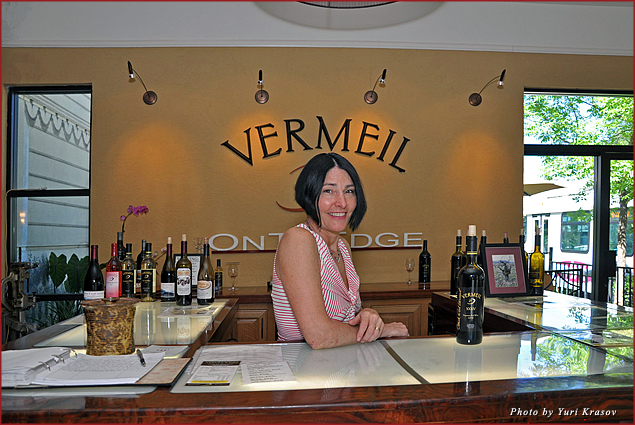 I stopped at the equally legendary Vermeil Wines/OnThEdge Winery. Vermeil Wines was conceived by Dick Vermeil, Super Bowl winner and two-time NFL coach of the year, while winemaker Paul Smith founded the OnThEdge Winery. The paraphernalia-filled testing room reflects both of their personalities and offers a full line of critically-acclaimed wines.

I was lucky to meet MarySue Frediani – a winery partner, a third-generation representative of a well-known wine growing family, and a walking encyclopedia of all things Calistoga.

Following MarySue’s expert advice, I tasted the most enticing and well-rounded collection of wines – each better than the next one, marked by so much love and attention to detail that after visiting the Vermeil Wines/OnThEdge tasting room I had a feeling of achieved perfection.

I thoroughly tasted the barrel-fermented 2011 Vermeil Sauvignon Blanc from Napa Valley with a little Semillon in it; 2010 Dry Semillon from Luvisi Vineyard in Calistoga; 2011 Cabernet Sauvignon rose; and especially 2008 OnThEdge Charbono – a rare grape from a vineyard on the edge of Napa-Sonoma.

Apparently, there are only 93 acres in all of North America that grow Charbono, and the Frediani family owns 10 of them.

Late-harvest 2008 Frediani 1956 Zin and 2009 late-harvest Semillon with a taste of lychee fruit were sweet, but not sticky and gooey – just perfect, the same as everything else in this amazing place. 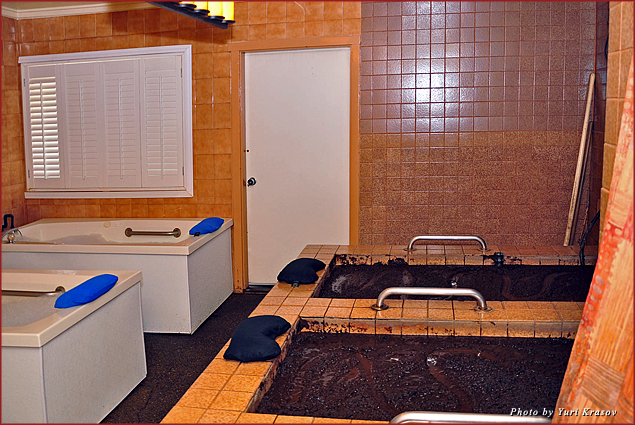 By the late afternoon I was totally in love with the city of Calistoga and ready for the ultimate mud experience – the real stuff at the Roman Spa Hot Springs Resort. Baths at Roman Spa offer the authentic Calistoga adventure – massage, mud and mineral baths – a local tradition for more than 100 years. The thick, black mud, silky to the touch, consists of the volcanic ash, natural peat, and geothermal mineral water.

Sliding into a bathtub filled with mother-dirt, I felt like a summer worm in a ripe plum – or what I imagine the worm must feel like surrounded by the sweet softness of the fruit. I felt warm, weightless, fully relaxed, and happy. Ancient Romans were known for inventing all kinds of indulgences, including Terme, or thermal bath resorts more than 3,000 years ago, and Roman Spa in Calistoga provides this kind of restorative and nourishing indulgence for its patrons today.

Of Shakespeare and Wine Celebrating the Harvest With Iron Horse Vineyards