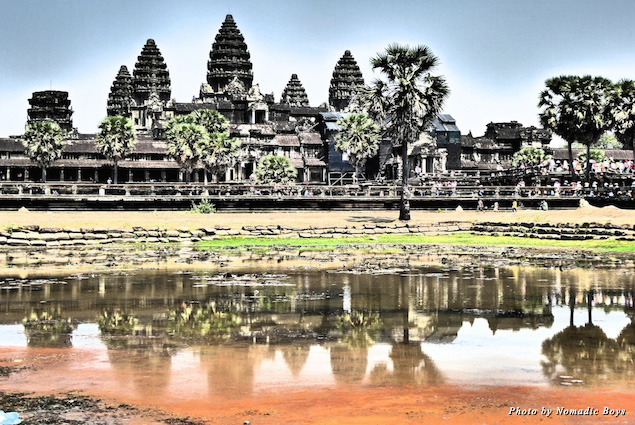 Siem Reap is Cambodia’s second largest city after the capital, Phnom Penh. It has an exciting atmosphere centered around “Pub Street,” with a fantastic range of restaurants and markets. The temples at the Angkor Archaeological Park are of course the main reason why most people visit Siem Reap, and it is a must stopover for anyone traveling to Southeast Asia.

We visited Cambodia as part of our backpacking adventures through Asia. However, our friends from London joined us as part of their two-week holiday, so we had to fit in with their itinerary. This meant we were pushed for time and looking to pack in as much as possible. If, like us, you are limited with time, we’ve put together a two-day itinerary—enough for you to get a good taste of Angkor Wat and the archaeological site as well as the fun city of Siem Reap. 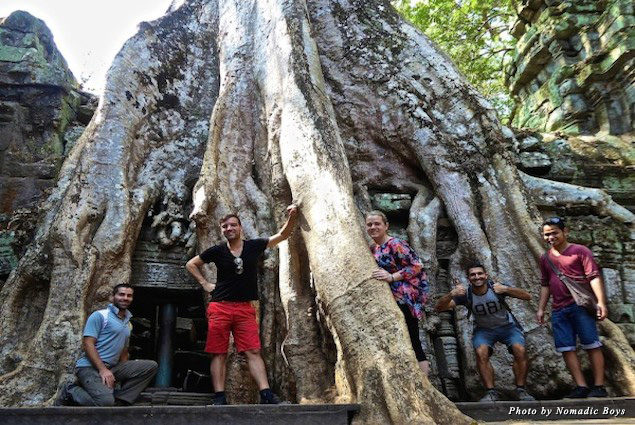 Angkor Wat, the largest religious monument in the world, is a UNESCO World Heritage Site. Wat is the Cambodian name for “temple,” and Angkor Wat was built as a Hindu temple in the early 12th century (around 1113-1150 AD) over an estimated 30 years by King Suryavarman II. The Angkor Archaeological Park is home to several temples, including the famous Ta Prohm temple where the Angelina Jolie film “Tomb Raider” was located.

Visitors have the choice of three types of day passes, called an “Angkor Pass,” to enter the Angkor Archaeological Park. We went in April 2015 when the fees were $20 for one day, $40 for three days, and $60 for seven days. Distances between the temples are large, so we recommend arranging a tuk tuk to take you around. We paid no more than $20 a day split between four of us.

On Day One, set the alarm clock for 5 a.m. to get to the main gate of Angkor Wat by 6 a.m. and watch a magnificent sunrise. Take a boxed breakfast with you, if possible. As a famous world wonder, Angkor Wat attracts coachloads of package tours. Most of these crowds enter the temple after sunrise, so we recommend leaving Angkor Wat exploration for Day Two. 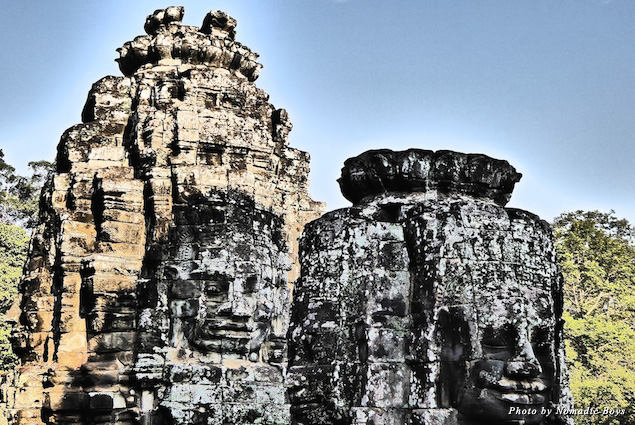 Instead, stay a step ahead of the crowds and visit the walled city (called Angkor Thom) and Ta Prohm next, before they do. The main highlight of Angkor Thom is the distinctive Bayon temple with faces carved into the stone walls. Ta Prohm is memorable for the many ancient trees growing out of its ruins.

Once you’ve seen these two temples, head back for lunch and maybe a quick rest after having to wake up early today. If your accommodation doesn’t offer lunch, grab a tasty baguette from one of the many street food vendors in town.

At night, attend a showing of Phare, the Cambodian Circus, one of our highlights in Siem Reap. Phare is a charity to help street kids and orphans develop skills to express themselves through art. We watched a show called “Sokha” about a girl who lived through the terrible Khmer Rouge regime in the 1970s and is haunted by it afterward. She uses music and dance to overcome her nightmares and inspire others struggling to do so as well. 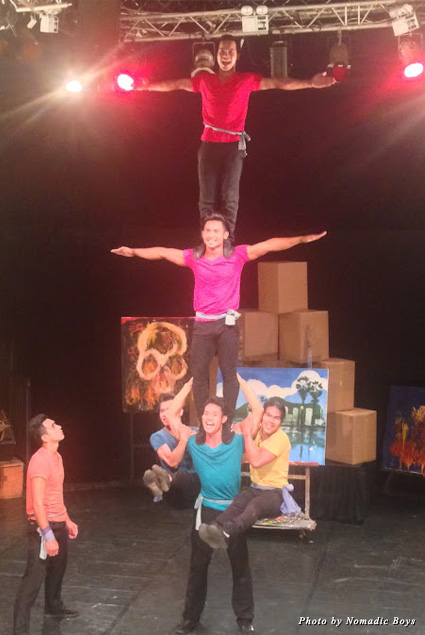 We really cannot recommend a visit to Phare highly enough. It is moving and incredibly impressive—and you’re helping a good cause. During the show there were subtitles on large screens to explain things, but it was well produced, which made it easy to follow. At the time of our trip, tickets were $18 for unreserved seats and $45 for reserved seats. We got the unreserved seats and arrived at 7 p.m. to queue for the 8 p.m. show and were able to get good seats in the middle.

After Phare head to one of the many restaurants on Pub Street for a late dinner. Our favorite was Le Tigre de Papier. End the evening with a stroll through the famous buzzy street and a cocktail at a bar such as Miss Wong. We were there during the Khmer New Year celebrations in mid April when water and talcum powder are thrown. 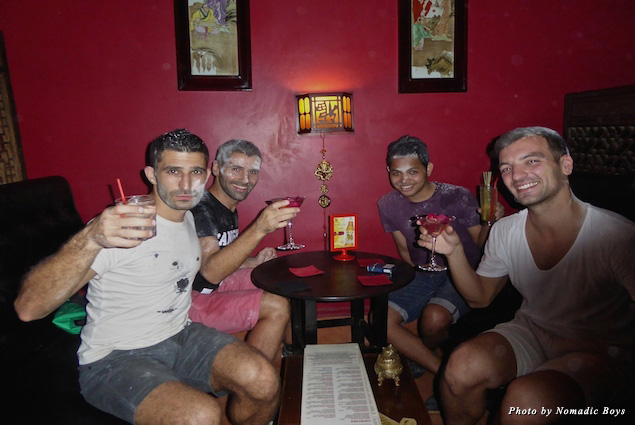 Begin Day Two a bit later, at around 10 a.m., with another tuk tuk tour at the archaeological park. Try to take a packed lunch with you in order to maximize your time. The crowds will have finished with Angkor Wat by this point and will be heading to Angkor Thom and Ta Prohm.

Angkor Wat is huge and impressive and the majority of your day should be spent exploring it. We recommend spending at least two hours here before heading to the small and less visited Ta Som temple. Ta Som is famous for its eastern gate, which has a beautiful ancient tree growing out of it and will also make a good point to stop for your packed lunch. The final temple we recommend visiting is Preah Khan, which is similar to Ta Prohm with beautiful ancient trees growing out of it but not as popular, so it will be more peaceful. 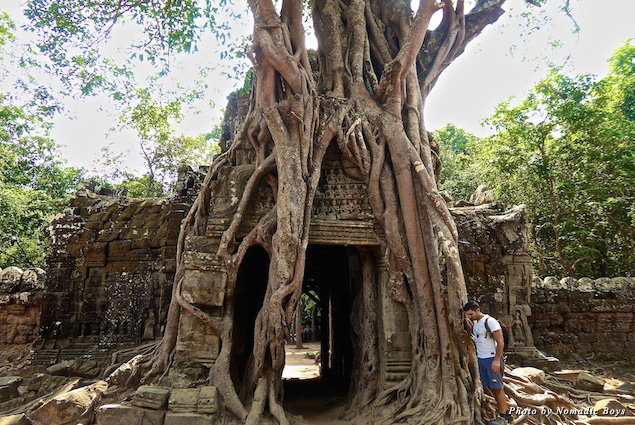 By now, the majority of the visitors will head to the Phnom Bakheng hill to watch the sunset and it will become incredibly crowded and almost unbearable. The view will also be unremarkable because Angkor Wat is located east from Phnom Bakheng hill, so your view of the sun setting in the west is only over countryside. Instead we recommend heading to the less frequented Pre Rup temple. The view will be the same, but it will be calmer and more enjoyable.

We recommend trying something different for dinner at the Bugs Café. Cambodians make the most of everything when it comes to food. Insects are easy to rear and high in protein, and they make a hearty meal. At the Bugs Café we tried the taster platter consisting of fried tarantula, scorpion, and water bug, as well as a stir-fry of silk worms and crickets and a chopped ants samosa. Go on, we dare you! (Note: they do offer foods without insects, too). 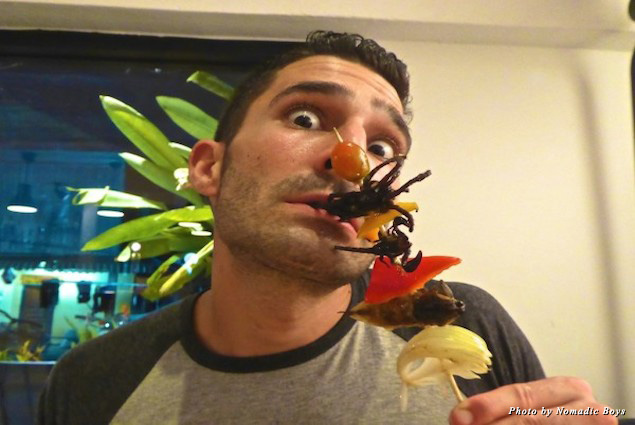 End the day with a stroll through Pub Street visiting one of the many bars there for a drink. You can check out our gay guide to Siem Reap’s bars for the ones that are the most gay friendly. Next, visit the nearby Night Market to test your bargaining skills, stock up on souvenirs, or buy a new sun hat.

For more about our travels in Cambodia, watch our Cambodia travel video.