Living It Up in Puglia, Italy 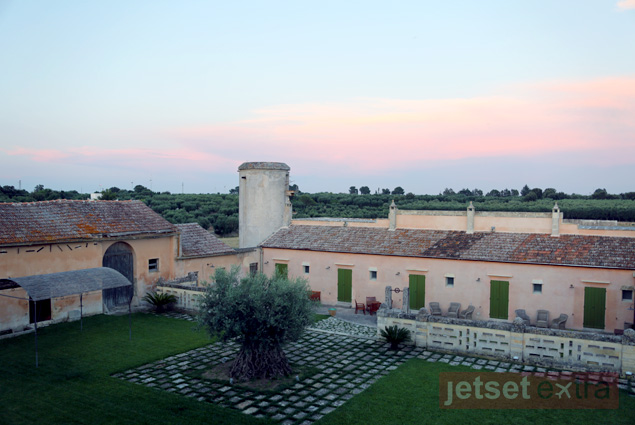 Living on the West Coast of the United States makes for a very long trip to Italy, but upon landing one is generously rewarded with all this dream destination has to offer. We arrived in Brindisi, a province of Italy’s Puglia region, a bit after 3 p.m., weary but full of excitement to see our friends. We found our way to the car rental desk and were given the keys to our car in a prompt and efficient manner. (Our friends, Ana of Mrs. O Around the World; her husband, Simon; Ashley of The Lazy Travelers; and her husband, Jeff, were not so lucky, as we found out later that evening.) Budget Rent A Car gets an A+ for a job well done. 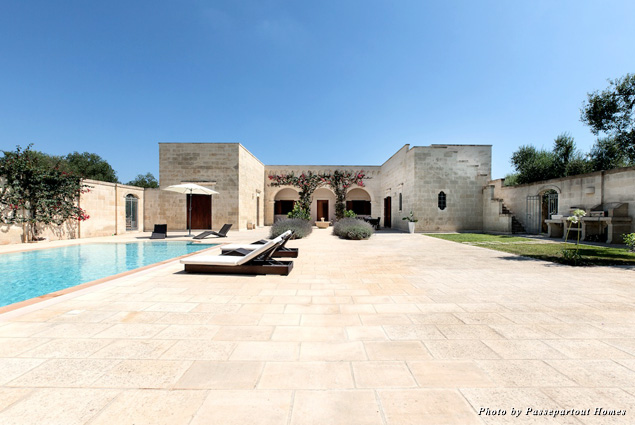 Jason and I headed to Puglia’s Salento peninsula to the Passepartout Homes villa where Ana, Simon, Ashley, and Jeff were waiting for us. As travelers often are, we were exhausted upon arrival and had no inclination to either cook for ourselves or figure out where to go eat. Luckily our villa, the Masseria il Trullino, offered a private chef at an extra cost, and we were treated to a home-cooked meal. 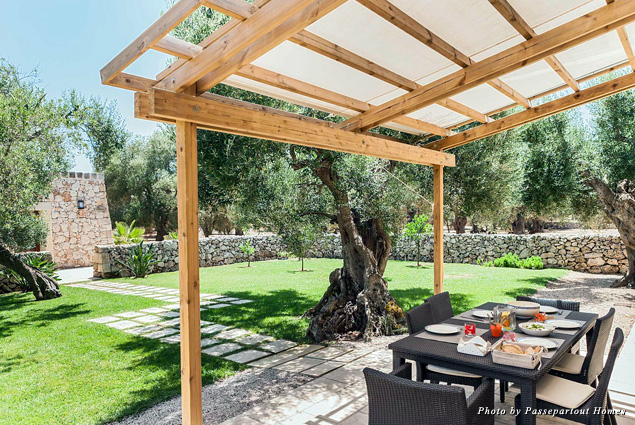 The villa was incredible. It sleeps 10, with four bedrooms and two bathrooms in the guest annex plus a living area, kitchen, and bathroom in the main building and an additional guest pajara (a traditional stone hut with a flat roof) also on the grounds. We were all more than comfortable and had plenty of privacy. 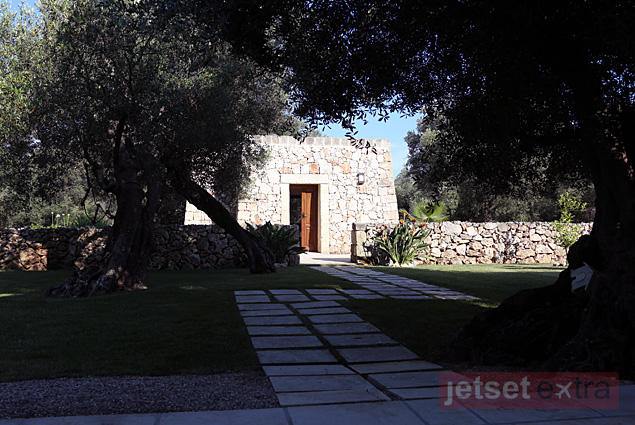 We were there for four days of fun-filled activities, including lounging by our villa’s gorgeous pool and sunning ourselves at Bagno Lucia, one of the many beach clubs near by. Passepartout also works with local vendors to assist guests with activities to explore the surrounding areas. Apulia Promotion organized a very unique experience for us to visit and explore the Naturalis Bio Resort, a hotel and spa I think we all agreed we hope to re-visit someday. The suites are stunning and take you right into Old World Italy with modern amenities. We also visited its cosmetics lab, Natural Is Better. We loved the concept and design as well as the products—so much so I am still using them back at home in Los Angeles. 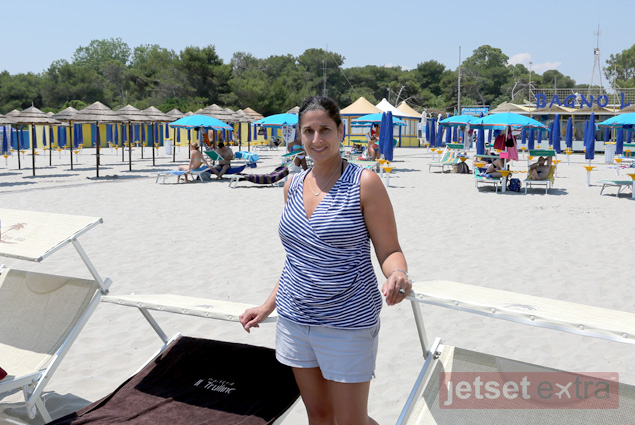 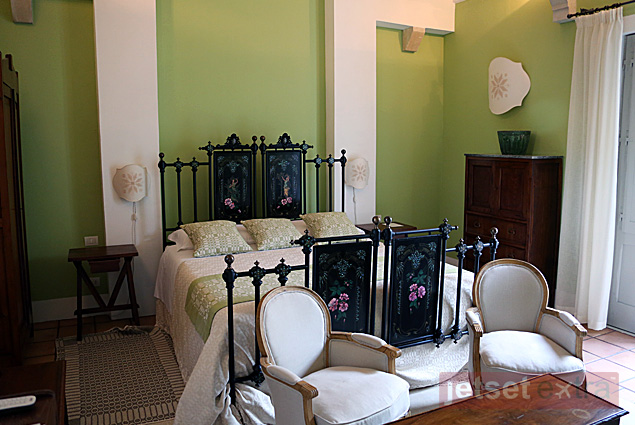 It’s really hard to go hungry or thirst in Italy. We tried! (OK, no we didn’t.) Ana organized an afternoon of wine tasting in a fantastic palazzo in Squinzano with a group called The Winerist. We were educated about the grape varietals used in the region and the rustic foods of the area, too.

We were also treated to an olive oil tasting, and let me tell you how attractive it is to learn to taste olive oil. Have you ever seen someone tasting coffee? It’s very similar: One has to put the oil on the tongue then, as it settles over the taste buds, suck air through the teeth a couple of times to blossom the aromatics. It’s hilarious to watch but very fun when everyone is doing it. Needless to say we laughed at each other for a good hour. 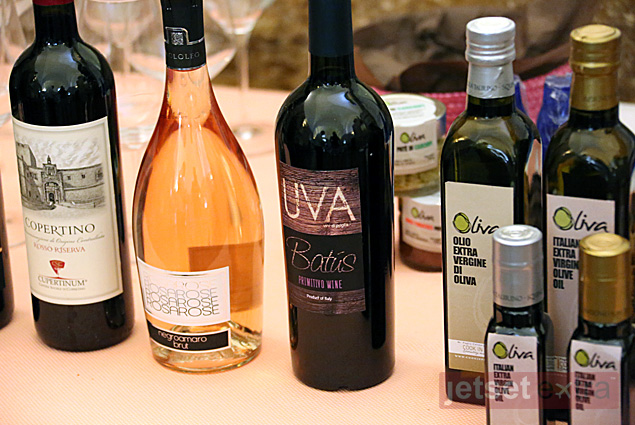 In the middle of our tasting session we were surprised by a local marching band playing through the town square in honor of St. Anthony. So, glasses in hand, we walked out to the celebration and joined the locals. 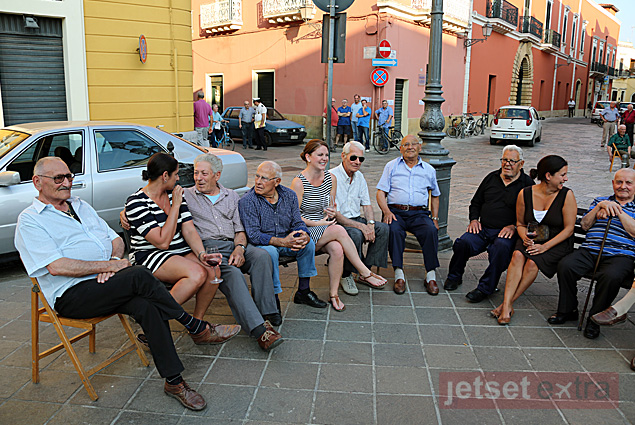 It’s always interesting to me how much food is consumed when traveling. I don’t know why or how, but somehow between the six of us we seemed to always organize a fantastic meal. On our way back from wine tasting we stopped at a local grocery store and bought provisions, including Prosecco, wine, beer, meats, and cheeses, to accompany the lovely array Ana and Ashley had purchased earlier in the week.

Our villa was equipped with an outdoor cooking area and Jason became the outdoor cuoco del giorno. The team chipped in and prepared the foods for him to cook as well as the spread of lovely items that didn’t need cooking. There’s nothing like cooking and eating at “home” to make you never want to leave.

Ashley had also arranged for us to go to nearby Lecce for a cooking class with The Awaiting Table. Owner and multi-talented Silvestro Silvestori led us through the lovely city of Lecce; churches, wine bars, restaurants, markets, and street vendors are all a part of the city’s spectacular energy. Silvestro walked us to the market to gather our ingredients for the evening’s class then walked us back to his kitchen, where we all worked together to create lovely pasta called sombreroni (Mexican hats). We also created a fresh fennel salad, a braised chicken dish with olives and wine reduction, and a dessert similar to biscotti made with whole almonds.

Our evening was delightful and made for a lovely ending to our Puglia trip. Our next stop was Milan for more adventures in food before we said goodbye to Ana and Simon and headed to Lake Como with Ashley and Jeff.

If you ever find you self in need of an Italian adventure, might I suggest you start in Puglia? It really is unique unto itself, and you won’t want to go home.