Live Photo Shoot at the Andaz Hotel on the Sunset Strip 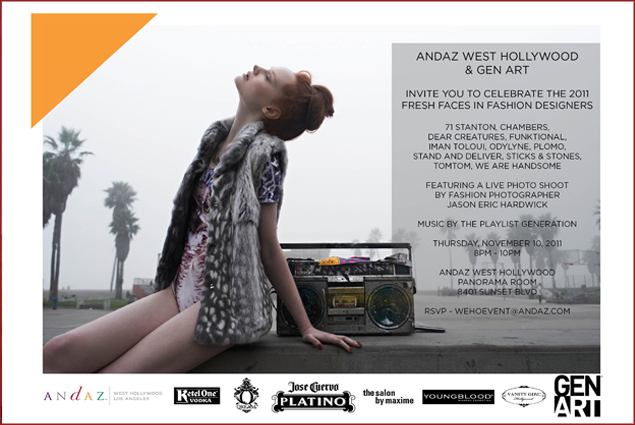 I love the Panorama Room at the Andaz West Hollywood. My first trip up to the penthouse level was a few years ago, when I was launching the American Cancer Society’s Relay for Life in West Hollywood and wanted to engage the business community in the event. I went to the Board Installation lunch for the West Hollywood Chamber and learned that here in WeHo, you could do business AND have fun. I loved being an event planner and fundraiser. And as fate (and the recession) would have it, I was laid off from that job back in March 2008, but event marketing, especially in West Hollywood, is still such a big part of my life and career today.

Arts and entertainment event company GenArt, took a different approach to events and turned the fashion photo shoot inside out on November 10, 2011 at the Fresh Faces Designer Reception, and we were proud that our vanities were on deck lighting up the backstage area.

The dramatic, beautifully lit “backstage area” was one of the focal points last Thursday in the private penthouse-level Panorama Room at the Andaz West Hollywood (previously known as the Riot Hyatt for its wild rock & roll roots). This room has a totally different feel in the day vs. night. 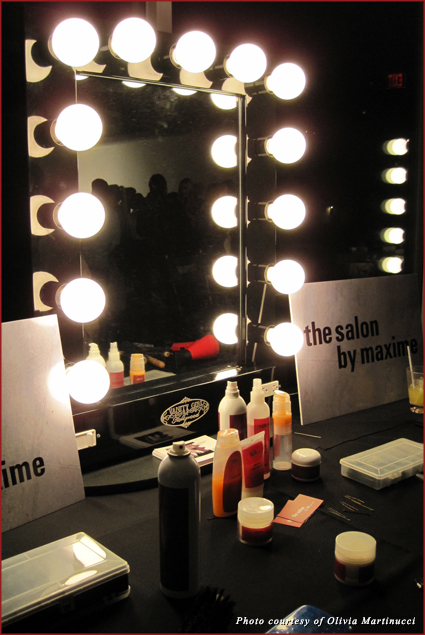 The intimate reception was well-attended by GenArt members, LA Fashion insiders, media and guests of the sponsors (mine included) – thanks Viet and Olivia 🙂

Models were prepped at the Vanity Girl Hollywood lighted vanity stations, as Youngblood Cosmetics and Salon by Maxime in Beverly Hills got the young beauties ready for a live photo shoot in the midst of the event.

The event was a celebration of the Fresh Faces fashion show held in Los Angeles on October 22 and featured designers including: 71 Stanton, Chambers, Dear Creatures, Funktional, Iman Toloui, Odylyne, Plomo, Stand Deliver, Sticks & Stones, TomTom and We are Handsome.

It was my first GenArt event, and I was pleasantly surprised. I met a lot of cool people – and was kind of suprised (yet pleased) that it was sans the requisite Step and Repeat. Don’t get me wrong, my step and repeat is always in my car but it was a nice change of pace.

With music by the Playlist Generation setting the mood, beautiful bartenders from the trendy Andaz hotel poured specialty drinks featuring Jose Cuervo Platino, Cream, and Ketel One. Guests were able to watch photographer Jason Eric Hardwick in action. In many ways, the shoot became a piece of living art as guests flowed easily from backstage area to complimentary bar to photo shoot to the outside pool deck overlooking Sunset Boulevard on one side and the Hollywood Hills on the other.

It is this fresh approach to Hollywood events that sets GenArt apart from the rest. Their official Fresh Faces hotel partner, Andaz West Hollywood, ensured that all the details reflected that.

And once the glam squads got the models perfect, one young blonde clad in a fashion-forward bathing suit dove into the Rooftop Pool as cameras flashed away … and by LA standards, it was a VERY chilly evening.

“We weren’t sure what to expect,” said one young couple visiting from San Diego as the party wound down.

Exactly. This is the Sunset Strip after all.