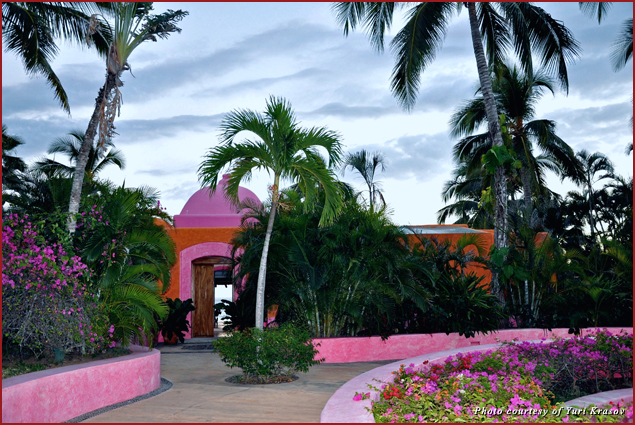 Upon arrival in Las Alamandas, pretend-believe Adam and Eve, my husband Yuri and I had our first margaritas on our private terrace, and then waded in the lukewarm saline water – clear-blue, bubbly, and full of tidal life. When flaming sunset clouds appeared over a purple mountain range, we headed in the direction of the El Oasis restaurant.

Wild jasmine flowers filled the night breeze with their sweet fragrance. We sat down to a festively decorated table on a terrace overlooking a manicured lawn, and white-uniformed servers immediately delivered crunchy chips with three kinds of house-made salsa – pico de gallo, chipotle, and tomatillo. Locally caught fish and fresh grilled vegetables grown on premises seemed like the most obvious choice from a daily changing menu. Everything was perfect, and yet something seemed amiss. I realized it was the absence of other guests in this exclusive and exquisitely kept resort, far removed from the bustling touristy areas of the Mexican Pacific.

As we returned to our pink abode decorated with antique pieces and fresh flowers, we were still the only couple in Las Alamandas, branded “Paradise Found.” It was getting darker and quieter around. Ocean BeachThe night birds’ chat overwhelmed the rustling of the palms and the roar of the ocean. Disturbed by my own imagination, tainted by urban legends and too much cult classics watching, I caught myself thinking of deserted luxury hotels, The Shining, and Jack Nicholson – with a lawn mower instead of a snow blower. Of course, there couldn’t be anything wrong with a place frequented by Nicolas Cage, Brad Pitt and Jennifer Aniston and a host of other celebs… 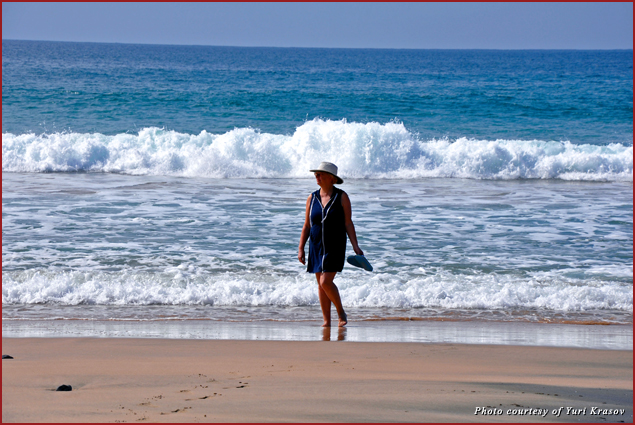 I remembered that while greeting us on arrival, Laura Valencia from Reservations told us that the area was super safe and that the guests never locked their villas. On a second thought, I double-checked all the doors and windows of our luxurious dwelling, and made sure the full moon over our bathtub was shining through a thick glass, not through an opening in the roof. All night, I tried to stay awake, listening to the waves crushing outside, to the palms, swaying in the wind, and staring in the midnight-blue darkness. I didn’t want to go in my sleep; I preferred to know what hit me. As is always the case with the hysterical insomniacs, I blacked out at the crack of dawn. 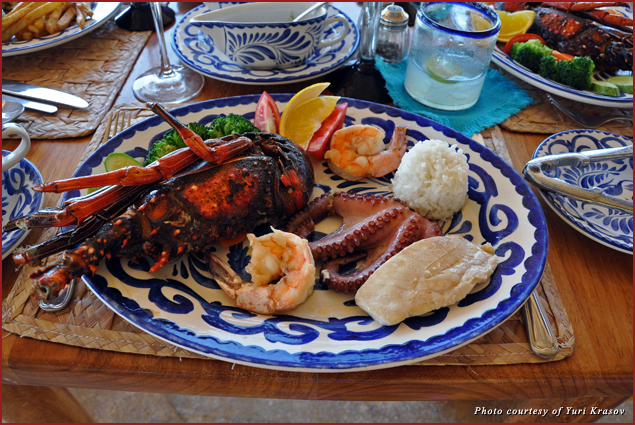 Next morning, all my anxieties evaporated in the bright Jaliscan sunshine. At breakfast (free-range Eggs Isabel with lettuce, avocado, and salsa fresca, and orange juice freshly squeezed from estate grown fruit) we met another happy couple habitually vacationing in paradise from rainy Oregon, and a day later, a pasty television crew arrived from snowy Norway to shoot a show, aptly titled Hotel Paradise. After a delightful meal, one of many, prepared by chef Alejandro Aguilar Morales and his team, we embarked on a property tour with the staff biologist Graciela Ugalde Caballero. We learned that Isabel Goldsmith-Patino, owner-manager, inherited a 1500-acre estate from her grandfather who built Las Hadas in Manzanillo. Instead of creating yet another tourist mega development, she decided to preserve the natural state of the coastline and built six-villa eco-friendly resort (30 to 35 guests at a time) named after wild flowers. A set of rules prohibits hunting on the property, and preserves local species as rare as jaguar and ocelot, and as common as deer and rabbit. We took a close look at various cactuses, and learned the difference between a wild and a garden variety nopal we’ve seen earlier on our dinner plates. Black vultures were flying overhead, followed by lazy falcons hoping to get an easy piece of fresh carrion. 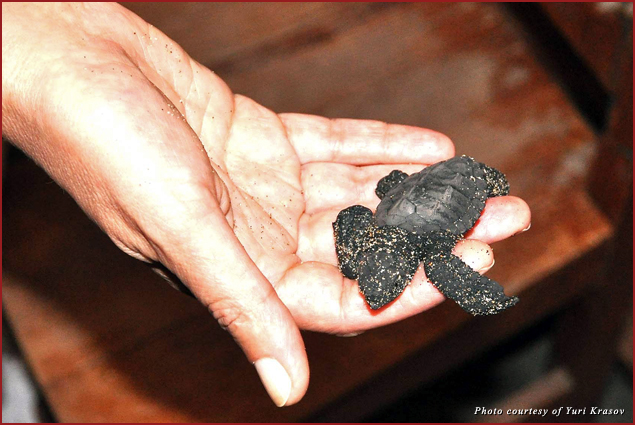 Graciela told us about more than a hundred bird species thriving in Las Alamandas, and about its involvement with the government-run sea turtle rescue program. Having been around for 300 million years, all sea turtles are now endangered. Out of eight known and living species seven are found along the Mexican Pacific coast. At the end of the rainy season in autumn, female turtles create up to five nests each – right here, on Las Alamandas beaches, and lay about a hundred eggs per nest. Then a group of volunteers – hotel staff and management – engage in collecting the eggs and transporting them to a special incubation room, where tiny turtles would hatch under the biologist’s supervision. When all the babies are out, alive and kicking, Graciela takes them back to the beach at sunset to avoid predators, and lets them make a 50-meter “run” to the water. She explained that although birds of prey are waiting exactly for this moment to feed on the little darlings, the turtles must cross the sand to “remember” the magnetic currents of the area and come back in 20 years to lay their own eggs. During our short visit, we were lucky to see (and hold!) a two-inch baby turtle. Graciela asked me to remove my pewter ring before handling the turtling, so an alien magnet in the metal would not mix up its senses. On our tour, we also spotted a turtle scull on one of the rocky beaches formed by the ancient volcanic lava. A sea turtle’s chances of survival, even when protected, amount to only one percent, but 100-year-old animals return to their native shores to die.

By the end of our journey through the dry forest of Las Alamandas, we met a herd of peacefully grazing horses. Those were the working horses – guests ride them upon request – but they were roaming free in accordance with the resort rules. Our biologist told us that a feisty red mare leads the herd, since she is the mother of the majority of other horses – and a smart cookie. When she sees staff members looking for the herd for a horseback ride, if she doesn’t feel like working, she turns around and gallops to the forest, followed by her docile brood. Other happy animals on premises are tejones from a raccoon family. Cutesy-faced mischievous creaturess sleep in the trees in daytime, but at night descend upon unsuspecting El Oasis diners begging for a piece of a freshly baked brioche or a slice of tomato. They would accept a give-away with their little fingers and waive their long tails in gratitude, but since they travel in families, sometimes reaching up to 50 individuals, the restaurant staff asks guests not to submit to pressure. 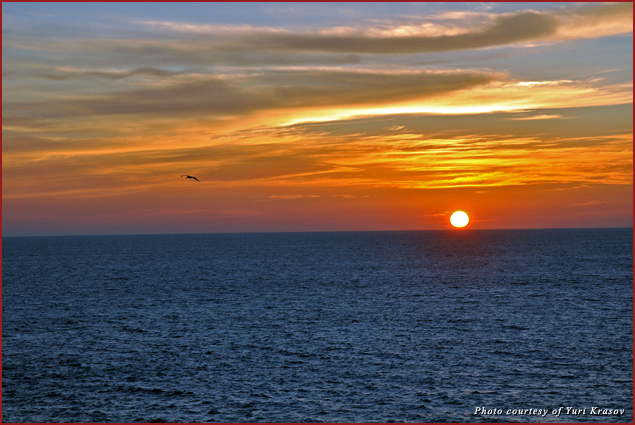 With an extensive range of luxurious accommodations and services, like picnics on demand on private beaches; couples’ massages and other spa options; dessert and champagne delivered to a sunset lookout; and La Palapa Beach Club, where guests relax by the pool and enjoy lunch in their swimsuits, Las Alamandas is a paradise for weddings, anniversaries, and honeymoons. However, enjoying a sunny retreat on a pristine ocean beach “just because” is good fortune enough to strive for it. Make your reservation and learn about luxury experiences and special packages by calling 1-888-882-9616 or by visiting their website.