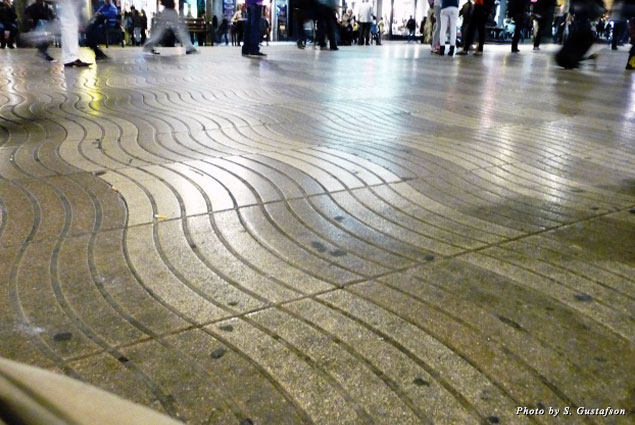 There aren’t many roads as special as La Rambla in Barcelona, Spain. You might have been on some that have special designations or historical significance, or seem to have some magic about them. La Rambla really doesn’t have any of that going for it yet it’s worthy of an entire day of your visit to the capital of this Catalonian people. Take a stroll with me, and you’ll see what I mean.

Technically a series of five connected streets, La Rambla is considered to be just one street because there are no crossing streets. You might hear it referred to as Las Ramblas (for the five sections), but the singular is just fine. The main part of La Rambla is the rather wide tree-lined pedestrian walkway, with narrow driving lanes separating the walkway from the restaurants, shops, hotels, and other businesses. Rambla in Spanish means dry riverbed, and this is where the water ran from outside the city walls down to the Mediterranean Sea. Not a very glamorous beginning, was it? 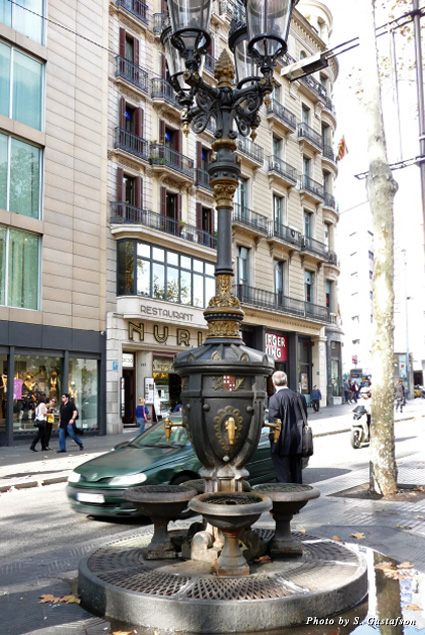 Starting at the Plaça de Catalunya, which is where the non-stop bus from the international airport deposits you, look for the widest street that branches off this huge pedestrian-friendly square. Ignore the Hard Rock Café that you see off to your left, watch out for the whizzing cars that don’t care you’re a friendly tourist, and make your way across the street to begin your journey down La Rambla. The wavy pattern in the walkway you’re admiring is designed to evoke the feeling of the water that used to flow down this area a long time ago. Speaking of water, just a short way down La Rambla is the Fountain of Canaletes; legend has it drinking from this fountain ensures you will someday return to Barcelona. Thirsty? Give it a try then get ready to book your return trip.

Yes, those are birds you hear as you continue your journey. The menagerie of birds, turtles, fish, and other small animals on the left side is where children would bring their parents and beg them to buy a pet. Since those living in apartments couldn’t have dogs or cats, these animals were the perfect pets; they were small, they were easy to care for, and they didn’t make much noise. If you go by at night, you’ll hear the plaintive chirps of the birds that really would like a new home. 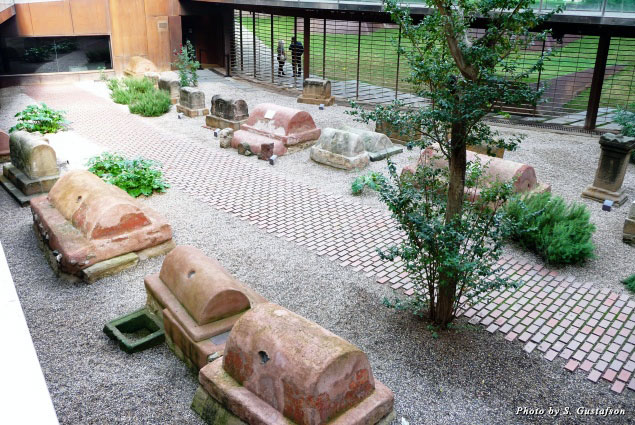 As you continue down on the left side, go through the hotel passageway at No. 122 and set your sights on some 2,000-year-old Roman ruins. These graves and other markings were uncovered as contractors dug to lay the foundation for some new buildings. The ruins might have been completely destroyed except for the noble act of some local residents who notified the authorities. You can look at them from above or pay a small fee and enter the grounds and the museum; they’re worth the time and the money. 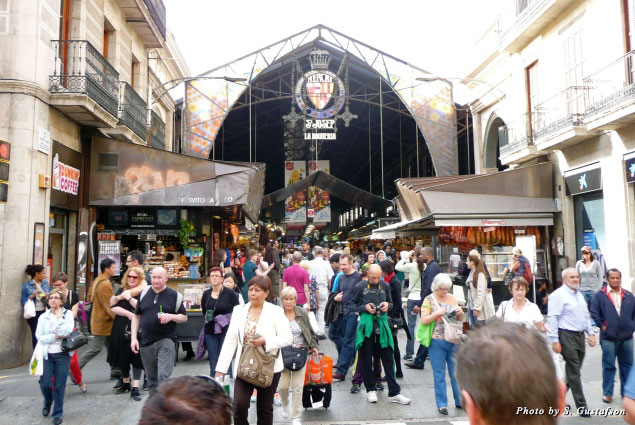 Returning to La Rambla, continue downhill and go past the red metro stop on the right until you see the wide walkway filled with people going in both directions. As you enter La Boquería market, you might just discover you’re hungry, and there are plenty of stalls in here to quench your appetite and your thirst. If you’re staying in town for a few days, this is a great place to buy olives, vegetables, cheeses, fruits, and fresh meats. You can find any flavor of smoothie that suits your taste. Caution: Don’t come in here if you’re hungry and you’re in a hurry! 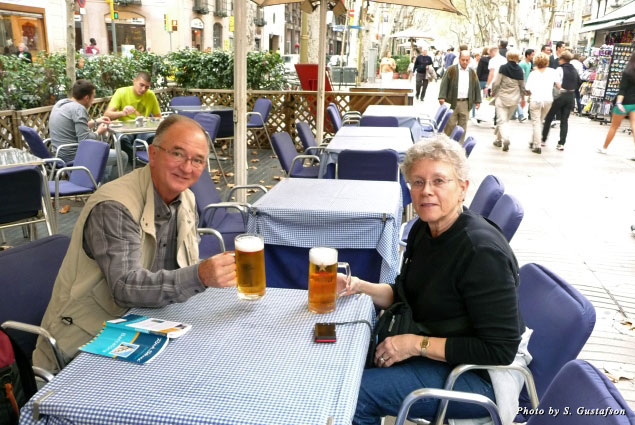 If you don’t find the right refreshment for you in La Boquería, you can always stop at any one of the outside cafés along La Rambla and have a refreshing beer or sangría, a favorite drink made with red wine. If the waiter asks you if you want yours grandé, be careful because he doesn’t mean just “big,” he means “very big.”

Continuing your walk, as you pass the flower stalls, be sure to look down for an original piece of art by the famous Spanish artist Joan Miró. The mosaic is of an anchor, which is a strong reminder of Barcelona’s linkage to the sea. Once you reach this point, you are essentially halfway down La Rambla. Fortunately, the rest of it continues downhill. 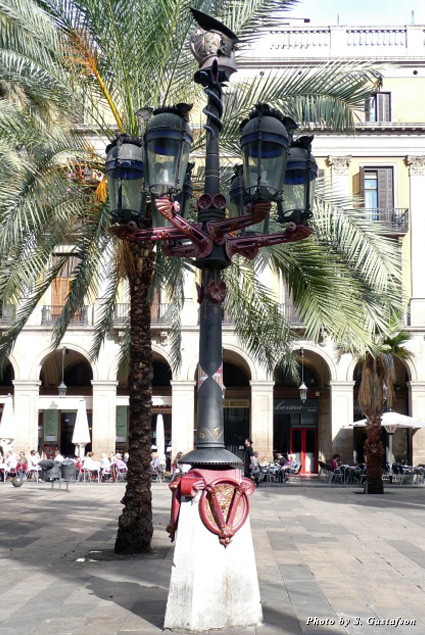 A few steps past the Liceu metro stop (your stop if you were going to the opera), find the entrance to neoclassical square Plaça Reial. Here is another marvelous place to take a short rest. There are taverns and bars, souvenir shops, palm trees, herbs, and—drumroll please—Antoni Gaudí’s first public works, two helmeted lampposts.

As you head back out of the square, go straight across La Rambla to find the street Nou de La Rambla. Situated at No. 3 is Palau Güell, the stately mansion built by Gaudí for a very wealthy family. If you have time, pay the small entrance fee to tour the inside and be totally amazed. One of the hidden gems of this palatial estate is the collection of whimsically decorated smokestacks accessible on the roof.

Returning to La Rambla, turn right and you’re near the end. You’re also getting close to Barcelona’s Chinatown, but don’t be surprised when you see nothing Chinese about the area. The Columbus Monument that marks the official end of La Rambla and the Maritime Museum on the right side of La Rambla are worth checking out, however.

Now that you’re at the bottom of La Rambla, you can see why you wanted to start your journey at the top. And since you already took a sip of the water from the Fountain of Canaletes, you’ll be returning to Barcelona one day when you can do the walk in reverse order!