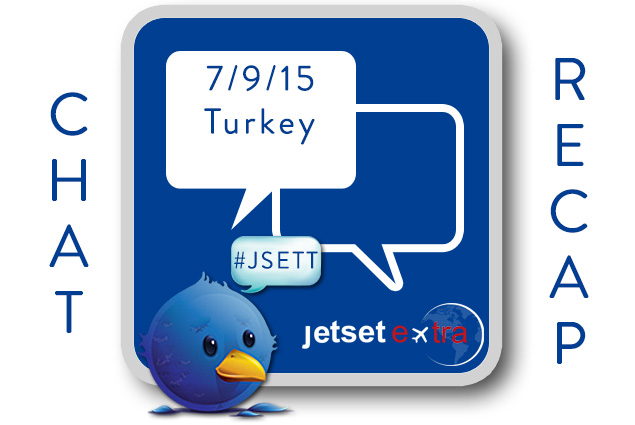 From Cappadocia to Istanbul, we’ve had Turkey on our minds lately and decided to make it our #JSETT topic of the week. Thanks to all who joined in and shared their experiences visiting the country—we know we weren’t the only ones who came away with some great pieces of advice!

Q1: Have you been to Turkey? What was your favorite area? Where do you wish you had gone? If you haven’t been do you plan to go soon?

A1: I want to go everywhere! It looks incredible. We’ve been pintresting it like crazy. Turkey 2016 here we come! #JSETT @JetsetExtra

A1. Yes, my favorite areas and activities: swimming in the Aegean Sea from a boat AND #PAMUKKALE … and Cappadocia!Beauty abounds!#JSETT

A1 I haven’t been, but it’s been on my list since forever. I want to go to Cappadocia & Istanbul. Need to see the Hagia Sophia! #JSETT

Q2: Do you have any off the beaten path recommendations for people traveling to Turkey? Where have you heard is a must-see place?

A2: Definitely a hamam – it’s quite the “experience”. Also, a whirlish dervish performance is fascinating. #jsett

@JetsetExtra A2 It’s not an unbeaten path, but you have to take a hot air balloon ride in Cappadocia. #jsett pic.twitter.com/LhOxqS9sOr

@JetsetExtra A2: Not so off-the-beaten-path, but all the markets (not just the Grand Bazaar) are so vibrant! Loved the Spice Market. #JSETT

Q3: Do you like Turkish cuisine? What is your favorite food? Do you have restaurant suggestions?

A3. I ate so many kabobs in #Turkey I overdosed!! #JSETT

@JSETTchat A3 Going to Turkey 13 years ago really introduced me to the Mediterranean diet which is the best! Fabulous food! #JSETT

Q4: Let’s talk Istanbul. What are your top three things to do there? What have you heard are things travelers must do/see there?

@JetsetExtra A4: See the Hagia Sophia, go on a Bosphorous tour, visit the Basilica Cistern. #JSETT

A4. Taksim is a must! So many places to eat, drink, people watch & be merry!!@JSETTchat #Turkey #JSETT

A4: Boating down the Bosphorus, Maiden Tower & Hagia Sophia are some of our favs in #Istanbul! More #JSETT ideas: pic.twitter.com/P2W3riyr7i

@JetsetExtra A4: Go to the Hagia Sophia and the Blue Mosque, hammam & take photos near the rainbow stairs #JSett pic.twitter.com/ZWsn74akw9

Q5: Football/soccer is the most popular sport in Turkey. Are you a fan? Have you ever attended a football game outside of the US?

A5.) As a journalist who started as a sportswriter, I would love to see soccer in Turkey or any other nation passionate about it. #JSETT

Q6: If you could plan a trip to Turkey right now and leave tomorrow, tell us what your trip would look like?

A6 #JSETT – I would definitely visit Capadoccia, Istanbul including Asian side and take a #cruise by gulet.

A6) Takism Square, some raki and a beach ( or two) #JSETT

Bonus Q7: Turkish coffee is on the UNESCO Intangible Cultural Heritage list. Have you tried it? What did you think?

@JSETTchat A7 #JSETT Yes, it’s strong! And I had my Turkish coffee grounds read. Video to follow chat.

A7 #JSETT not a huge coffee drinker, but of course tried it and brought some home as gifts.