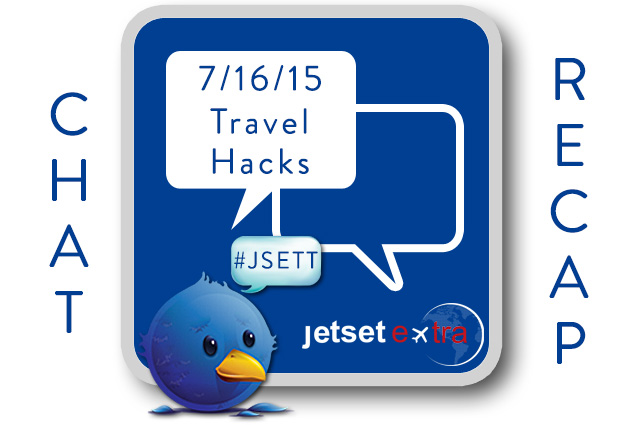 We’re always on the lookout for tips and tricks to pack lighter, spend less, and travel better. For this week’s #JSETT chat, we asked participants to share their favorite travel hacks. Check out a few of the best responses—we know we’ll be putting these to good use on our next trip!

Q1: When it comes to packing for a trip, there are different schools of thought. What’s your trick for packing efficiently?

A1 I roll my t-shirts, shorts etc allowing me to get more in my carry-on. Also I try to pack less, enjoy more #JSETT

@JetsetExtra A1. Mix & match outfits, roll them up, and pack Woolite packets to do laundry during the trip. #teamcarryon #jsett

Q2: Everyone wants to save money on flights. Do you have a hack for finding flights with high point value and/or less money?

@JSETTchat A2: I’m an absolute nerd about figuring out maximum point conversions! Have 3 CCs that help w/ point accrual! #JSETT

A2: Book as far out in advance as you can. #JSETT @JetsetExtra

@OneTravelLove #JSETT A2: I use @thehipmunk&have saved money every time.I love the +1 -1 day options as well as searching multiple airports.

Q3: Do you have any tech hacks for saving on data usage while abroad and keeping track of chargers, USB cards, selfie sticks, etc.?

A3. I keep all my tech (aside from laptop and cord) in a HOT PINK zipped bag. It makes it easy to find! #JSETT

@JetsetExtra A3 put your phone on airplane mode to avoid data charges. If ur phone is unlocked get a local cheap prepaid sim card #JSETT

Q4: How do you manage all your things when on an airplane? Do you have an organizational hack for in-flight?

@OneTravelLove #JSETT A4: I use my backpack as a carry-on&store it under the seat.I load the top zip with things I need access to(book,ipad)

A4: Two bags – one for things I didn’t want to pack (valuables) that I put above, and one for entertainment on board. #JSETT @JetsetExtra

A4: Try to keep only essentials on hand and everything else in the carry-on. Always have a scarf, book and headphones! #JSETT

A4: @JetsetExtra take pictures of stuff as I pack. When trying to find something i go thru the pics and know where that was #JSETT

Q4 To stay organized on a plane I try to take the same purse & carry on. I put things in same spot each time so I know where they are #JSETT

Q5: Luxury accommodations can be expensive and cheap ones can be scary. Do you have a hack for booking a great place on a budget?

A5 @LuxuryLink has some great bargains! We’ve used them a few times! #JSETT

A5: @JetsetExtra look for deals early on.. start with the luxury ones 🙂 then work your way down 🙁 #JSETT

@JetsetExtra a5: sign up for hotel emails/deals and use @HotelTonight for luxury for less – just booked Paris for less #jsett

Q6: What is your favorite travel hack that you’ve invented or found?

A6 Become an effective global networker in your field, give more info than you take. You’d be surprised at doors that open for you #JSETT

@JetsetExtra A6. Not really a ‘hack’ but Global Entry has kinda spoiled me. Makes zipping through airport less stressful. #JSETT