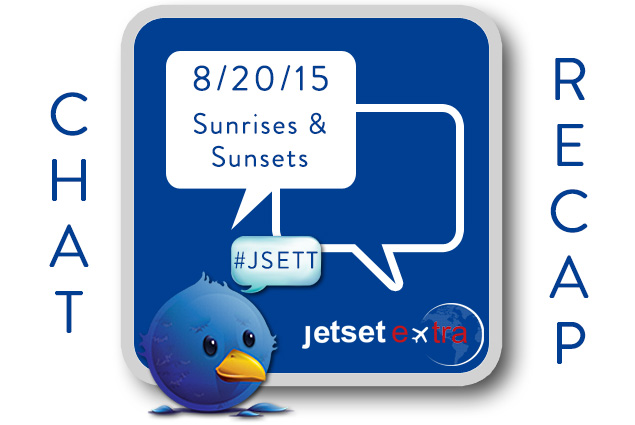 Everyone loves a beautiful sunrise and a stunning sunset. For this week’s chat, participants shared photos of some of their favorite early morning and late evening views.

Here are some of the top tweets:

Q1: What is the earliest you’ve woken up to go see a sunrise? Where were you? Was it worth the loss of sleep?

A1: Greetings from Kenya! I remember waking at 4am to catch the sunrise in Bagan, Myanmar. #JSETT pic.twitter.com/bBfxyxyMgv— Shane Dallas (@TheTravelCamel) August 20, 2015

@JetsetExtra A1: Palm Beach, FL – the fire alarm woke me up so I thought I’d stay up – you be the judge! #JSETT pic.twitter.com/nEsja8CDNK

A1. Camping on Fraser Island in OZ and woke up around 4:30am to this view #JSETT pic.twitter.com/f2xXnceVNI— dogsloveshushi (@MarjiStevens) August 20, 2015

Q2: Sunsets are special. How do you like to watch a sunset? How often do you try to catch one?

A2. Caught a gorgeous sunset last night on a boat on the ocean #JSETT pic.twitter.com/CgrvRjL8rW— Lauren DiMarco (@LolaDiMarco) August 20, 2015

A2. When traveling – nursing a drink whilst sitting with legs up. At home – walking my dog or sitting in pub #JSETT pic.twitter.com/aGYssaHqDT— dogsloveshushi (@MarjiStevens) August 20, 2015

A2. goal is every day from Hawaii shore (with rum drink). RT @JetsetExtra Q2: Sunsets are special. How often do you try to catch one? #JSETT

A2: How do I like to watch a sunset? With a cocktail, obviously! Oh, and with my husband. That’s nice too. #JSETT pic.twitter.com/A06JpiZmtp— Bad Travel Guru (@BadTravelGuru) August 20, 2015

A3. Mines not dedicated to that but I have a bunch of stunners on it @LolaDiMarco on Instagram @JetsetExtra #JSETT

A3: No what is a instagram account? I enjoy sunrises live in the moment better than a picture 🙂 @JetsetExtra #JSett pic.twitter.com/lRPZw0jMHu

Q4: Have you been in a place where there is no sunrise or sunset? Did it bum you out? Where were you?

A4 Yes, North of the Arctic Circle in Winter, but no, the blue of the night sky was so beautiful I didn’t miss it. @JetsetExtra #Jsett

@JetsetExtra A4, I have a friend in Nanavut, 24 hours of sun in the summer, 24 dark in winter, the money he makes keeps him happy #JSETT

A4: I was in northern Finland during the middle of winter. Only is light for 3-4 hours a day. No real sunrise or sunset. #JSETT— Shane Dallas (@TheTravelCamel) August 20, 2015

Q5: Is the green flash at sunset real? Have you seen it? What did you think?

A5: I was watching a sunset near @finchhattons on the weekend and they say there is a green flash at times. #JSETT— Shane Dallas (@TheTravelCamel) August 20, 2015

Q6: Have you ever seen the northern lights? Where were you? Do you have a photo to share?

@JetsetExtra seeing the Northern Lights is still on my list… hope to experience them someday. #JSETT

We saw it if not every night, but every week last winter! so amazing, still after 10 years seeing it… #JSETT pic.twitter.com/BKfb6Zgl0X— Auroraholidays (@AuroraHolidays) August 20, 2015