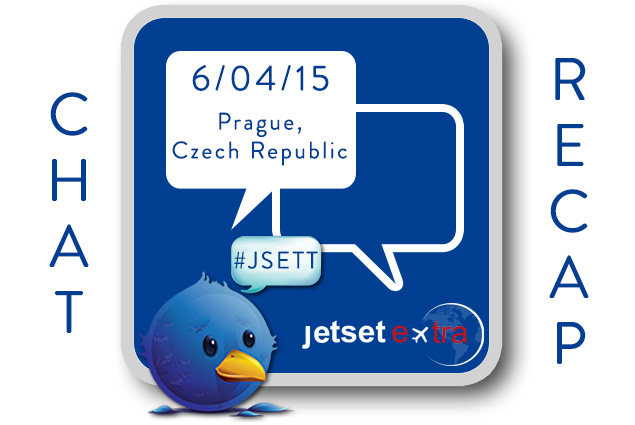 Have you been to Prague, Czech Republic? For this week’s Twitter chat, those who have and those of us who haven’t came together to share stories and make plans for future travels. After 30 minutes, we were definitely ready for a Czech beer and a castle tour!

One lucky person can win just that and a whole lot more in our current giveaway with partners CzechTourism, Asten Hotels, and the Radisson Blu Alcron, Prague. Click HERE for contest details and get inspired to visit Prague with some our favorite responses from this week’s chat:

Q1: Have you been to the Czech Republic? Did you love it? If you haven’t been, do you want to go? Where would you visit and why?

A1 I LOVE the Czech Republic. The people, the beer, the food, the small towns, the cities..all of it. LOVE #JSETT pic.twitter.com/VhBMs5q6ck

@JetsetExtra A1 yes! Been twice: first time to run the Prague Marathon, second time on a city trip, it’s a gorgeous city! #JSETT

@OneTravelLove A1: I have a number of times and love Prague and The Charles Bridge at night #JSETT pic.twitter.com/A4S35wj8Pb

A1: We stayed in the outskirts but of course went to the beautiful #Prague & loved it! #JSETT http://t.co/RxrYfOAj5s pic.twitter.com/bV3xwBxYp6

A1: @JetsetExtra haven’t been, but would love 2 go, beautiful & rich w/ culture- #Prague on the bucket list! #JSETT pic.twitter.com/uWn7RcEqr5

Q2: Prague Castle is the largest castle in the world. What other castles have you seen that were impressive?

@JSETTchat A2 one that was impressive was the Neuschwanstein Castle in #Bavaria, simply breathtaking! #JSETT

A2 this random castle in Germany wasn’t too bad #JSETT pic.twitter.com/5j0JBTse36

@JetsetExtra A2: It is an amazing castle perched up high above the city! Windsor Castle is pretty impressive #JSETT pic.twitter.com/8nR8lRsuXR

#JSETT A2 Probably some of the castles we visited on shore excursion while in Muscat, Oman, neat architecture

Q3: Prague and the rest of CZ have lots of festivals. Do you enjoy going to festivals around the world? Which has been your favorite?

A3 I don’t usually plan around festivals, but love when I find them accidentally – Edinburgh Military Tattoo, #VividSydney for ex. #JSETT

@JSETTchat A3 Festivals give you a great sense of culture! My favorites are the German fests like Oktoberfest and Fruhlingfest! #JSETT

@JSETTchat A3: We have lots here in London and just had London Wine Week #JSETT pic.twitter.com/NIIXHxYAcR

A3.) Jazzfest in New Orleans! I really want to do the Zurich Street Parade. #JSETT

Q4: What would you suggest to a first-time traveler to Prague (where to eat, sleep, sightsee, etc.)?

#JSETT A4 As always I’d tell them to ask locals where they would go, skip the tourist traps and enjoy what the locals do.

@JetsetExtra A4: Staying in the city centre is a good option. There are many great cafes and restaurants to choose from. #JSETT

A4 Prague Castle early in the morning to avoid the crowds, stay on the west side of the river, less tourists #JSETT https://t.co/EFMHLVj9cr

A4.) Letna Park, watch for the pickpockets, pay cash to save room on a hotel and make the Chapeau Rouge your “home” bar. #JSETT

A4: Go inside the tour of the Astrological Clock for overhead views and walk past the Charles Bridge into Old Town. #JSETT

Q5: Food, beer, and wine are big in Prague! Have you tried Czech cuisine? If not, what would you be most interested to try?

@JetsetExtra A5 Pilsner Urquell on a sunny day on a terrace is the best! Also loved the rich stews and sausage stands #JSETT

Q6: The Czech Republic offers outdoor activities such as biking, horseback riding, and hiking. Are these things you’d consider doing?

A6 the more I travel, the more I realize activity tourism is awesome. So yes to biking, horseback riding, hiking in Czech Republic! #JSETT

A6 Floating down the Vltava in CK is more my outdoor style. #JSETT

@JSETTchat A6: YES! All of them and more, we do a lot of those here in #SouthAfrica as well. 🙂 #JSETT