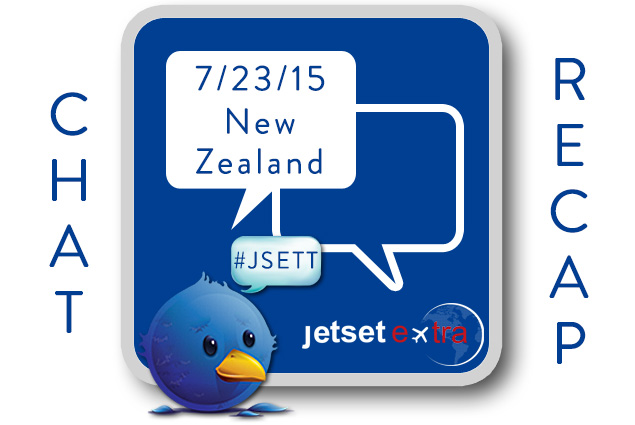 Whether you’ve been to New Zealand or it’s on your must-visit list, here’s a roundup of the top tweets from this week’s #JSETT chat all about the land of the kiwis!

Q1: Have you been to New Zealand? If yes, when? If no, is it on your list of places to see?

A1 I have not been yet. Of course, i want to see all of it, but would love to do wine tasting and exploring in Central Otago #JSETT

@JetsetExtra I haven’t been! Hobbiton is on my list. New Zealand looks amazing with its diversity of terrain in such a small area. #JSETT

A1. I went to NZ about a decade ago but only for 10 days so I only saw the North Island. Discovering the Maori culture was amazing #JSETT

A1 NZ is fabulous. I bicycle toured there several times. Need to get back. It’s been far too long. #JSETT

Q2: New Zealand is great for activities in water (sailing, surfing) and on land (hiking, cycling). In which would rather participate?

A2.) I would want to do it all! They also have wild boat rides down rivers; THAT seems like fun! #JSETT

A2: I would love to take an epic trek across the mountains with an IMAX camera documenting my adventure. #JSETT @JetsetExtra

@OneTravelLove A2 Do I have to choose? 🙂 I’d like to hike on the Milford Trail and sail out of Auckland! #JSETT

@OneTravelLove a2: both I hiked on glacier and kayaked in lake, gokarts on mountain and enjoyed wines #jsett

Q3: What are your top five suggested things to see or do in New Zealand?

.@OneTravelLove A3: We want to see Milford Sound, the Auckland Art Gallery, go on a volcanic air safari, take a wine tour, and hike! #JSETT

Q4: What do you know about New Zealand wines and its wine country? Are you a fan?

A4: If they have wine, I’m a fan! #JSETT @OneTravelLove

@JSETTchat A4 I”m a huge fan of the Sauvignon Blancs that come out of the Marlborough region! #JSETT

A4). Getting to know wines and visiting wine regions is always a great travel adventure! #jsett

Q5: The bungee jump was invented in New Zealand. Would you give it a try?

A5.) Heck no! But I would stand on the bridge and watch it for sure. #JSETT

@JSETTchat a5: not a chance I’ve stood on the bridge in queenstown if that counts & looked down #JSETT I’m a wimp

@OneTravelLove a5: considered doing it when there solo but opted out and didn’t want to buy video to prove to family/friends #jsett

A5) Absolutely not. It might spill the wine! #JSETT

@JSETTchat a5 I’ve done it off the harbour bridge in Auckland and it was harder than a sky dive! #JSETT

Q6: What about the food in New Zealand? Any suggestions about where to get great oysters or the best lamb?

.@OneTravelLove A6: We’ve been told to check out Fleur’s Place for the best seafood and Logan Brown for great lamb! #JSETT

A6. Food? Well, there was an amazing Jaffa flavored ice cream in a little town somewhere on the North Island … It was near a lake #JSETT

A6 Lamb is great anywhere. I really enjoyed the dairy products. And what about those Devonshire creams or iced coffee? #JSETT