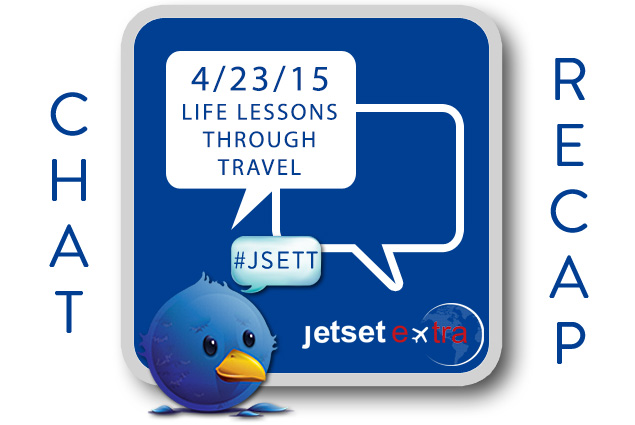 Travel can teach us many things—a new language or skill, a lesson in safety or solitude, or a greater understanding of the world around us. For this week’s Twitter chat, we shared stories about how travel has changed us and what we continue to learn and implement into our daily lives.

Enjoy this recap of our questions and a few of our favorite responses:

Q1: Have you been on a trip where you learned a life lesson? Where were you and what did you learn?

@OneTravelLove A1 Abu Dhabi. I realized at a new level how fortunate I am to be able to live as a single, educated, independent woman #JSETT

A1: while traveling in general, I am always learning to trust people. There are more good humans than bad. #JSETT

Q1 Trip where you learned a life lesson? A1 1st int'l trip w/ baby to #Nicaragua in 2007 I learned I COULD still travel w/kids! #JSETT

A1: Tresco in the Scilly Isles – no cars, one pub on the whole island amazing how well you can live with so few amenities #JSett

@JSETTchat a1: backpacking in Europe I learned the world is awesome and not as scary as I thought #JSETT

A1: Traveling to Brazil and giving back to the local school kids helped us learn about traveling with purpose! http://t.co/TGy2sjOBOc #JSETT

Q2: Has the life lesson you learned changed how you live your life? In what way?

@JSETTchat A2: Yes, I spend serious time encouraging younger people in my home country to explore this world we live in #JSETT

.@JSETTchat A2: Travel always opens my eyes how people who at first seem drastically different from you are actually very similar. #JSETT

A2: I've learned to be open & share my stories with ppl. To embrace others & not judge #JSETT

@JSETTchat Q2 yes, it inspired me to continue to work and live abroad. Taking the leap is the hardest part sometimes #JSETT

A2: I'd like to say that I'm now more spontaneous in real life – but i have 4 Excel sheets open right this minute 🙂 #JSETT

Q3: Do you look for opportunities while traveling to better yourself and your life back home?

@OneTravelLove A3 Not specifically or I don't think I'd have as much fun – I'm open to learning and experiencing and change results! #JSETT

A3: Take the memories home by recreating food, buying music and adopting your favourite customs from your travels #JSETT

a3: YES! travel for me is an education. I come back smarter, happier & more well-rounded. I take less for granted also #JSETT

@JSETTchat A3. I try to 'be present' when I travel and look for opportunities to grow. #JSETT

A3: Always. I think travel is all about meeting new people, learning about new cultures, and becoming a more well-rounded person #JSETT

Q4: What lesson do you wish more travelers would learn while abroad?

A4: Respect and learn from other cultures and remember you're a guest there. #JSETT

A4: Just because someone's culture is different than your own, does not make it worse or lacking. Different is different. Embrace it. #JSETT

A4: get off there tourist path and see what locals do. Learn customs and be polite. You represent where you're from so do it well! #JSETT

A4 You are NOT "back home", you are a guest of another country. Understand & show you respect culture (to locals). Smile, have fun! #JSETT

A4. Opening your eyes to different customs and being respectful goes a long way! #JSETT

@JSETTchat A4: To stop trying to see everything in a day. SLOW DOWN! Don't just visit. Take something away & give something back #JSETT

Q5: How often do you reflect on the things travel has taught you? Has it changed who you are or how you view life?

A5: I definitely don't reflect on the lessons enough and am reminded when I go again but it's changed me overall. #JSETT

A5: Everyday! You can read about other places but until you actually GO there can you really experience it. #JSETT

A5: As longer the trip as more profound reflection. Amusing to see myself changing in my age. #JSETT

@JetsetExtra A5: They say travel broadens the mind & makes you a more rounded person – I agree! #JSETT

A5 Everyday… #Travel has made me more outgoing and open to meeting everyone. Can't even remember my life without it. @JSETTchat #JSETT

Q6: Has a life lesson you learned from traveling helped someone you know in his or her life?

@JSETTchat a6: my parents never travelled until I moved to England and they had to get passports to visit and loved traveling! #JSETT

#JSETT A6 many friends have learned that the world is very different when traveling than watching the news, all enriched their lives from it

@OneTravelLove A6. I hope so! I try and be brave with life and inspire others. #JSETT

@JSETTchat A6: Yes, I have been lucky enough to have someone actually tell me, how something I shared with them helped them #JSETT

@JetsetExtra A6 My travels have encouraged some of my friends to travel and they've learned to be less fearful of the unknown. #JSETT

A6. I love hearing from other travelers and how travel inspires them, and hopefully I can do the same for someone else! #JSETT