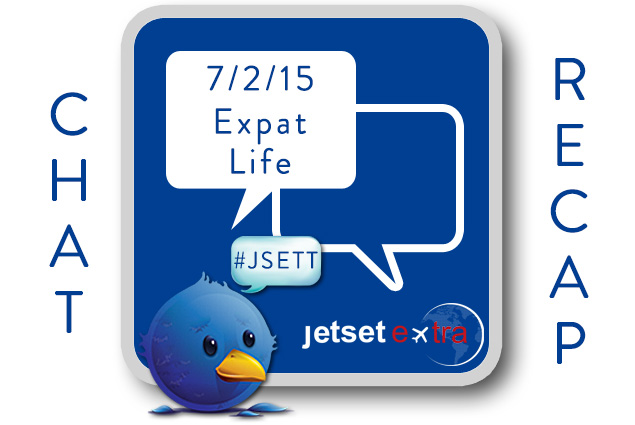 Have you ever thought about moving to another country? Expats Jon Hochstat (@JHochstat) and Kelly Michelle (@80pairsofshoes) co-hosted this week’s chat, during which we discussed the pros and cons of living abroad. Check out some of our favorite responses!

Q1: Have you ever thought about becoming an expat? What is so enticing about the idea?

A1 For me it was fear of the unknown & learning I was most comfortable OUTSIDE my comfort zone. #JSETT

A1: I’m an expat; living in England (not London) but originally from New Zealand! #JSETT

A1: I think about it all the time, I love the idea of living life in a new place. #JSETT

A1: strongly considering right this moment. It’s the freedom and wanderlust that is drawing me. Nothing to hold me here @JetsetExtra #JSETT

A1. I was an expat 3 years when I lived in Israel & #Palestine. Much of the draw is in the learning & maturing! @JetsetExtra #JSETT

Q2: What would your dream expat destination be?

A2. My #Expat dream would be #Australia or #NewZealand I’ve never done it because it’s really too far from the family in #Italy #JSETT

A2 Either somewhere in C. America to become fluent in Spanish or #Australia. #JSETT https://t.co/wClvSrmG34

Q3: You decide to live somewhere but don’t speak the language. How do you get by until you become fluent (enough)?

A3: Take a language course before you go so you have the basics down. Try a foreign Lang meetup group @JetsetExtra #JSETT

A3.) You can always communicate when you need to; just smile and be friendly! I was lost in Mexico tying to find the Baja 1000 once! #JSETT

A3 Befriend a local who can. Immerse yourself with locals and learn quick. I learned a lot of Bahasa in 4 months in Bali @JSETTchat #JSETT

.@JSETTchat A3: Language apps, pocket dictionaries, and practicing with willingly locals will get you a long way #JSETT

Q4: What would you miss from home if you became an expat?

@80pairsofshoes A4: In general I would always miss convenience. Specifically @Target (one store will all you need) & @traderjoes 😉 #JSETT

A4 Maybe some fav local store brands? Can’t think of much we would miss. Family can use the excuse to vacay where we are! @JSETTchat #JSETT

A4: I would miss salmiakki (finnish candy), my friends and my language. #JSETT

Q5: In your opinion, what are three essential things to know in order to survive in another country (other than the language)?

@80pairsofshoes A5 #JSETT Be nice, smile and trust your gut.

A5: Understand customs/traditions, history, and make friends with locals! 🙂 #JSETT

A5. Have an open mind, be flexible. Sometimes it’s hard so be patient, keep the curiosity and be happy to learn #JSETT

Q6: If you knew then what you know now as an expat or someone who has lived abroad briefly, what is your No. 1 piece of advice?

A6 Always be Aware / Don’t be Stupid #JSETT

A6 Just go, you can always go back if you don’t like it. That applies for living and traveling @JSETTchat #JSETT

A6 #JSETT – Don’t compare everything with how things are back at home.

@80pairsofshoes A6 always look on the bright side of life *cue song* But seriously: focus on the positives as much as possible. #JSETT