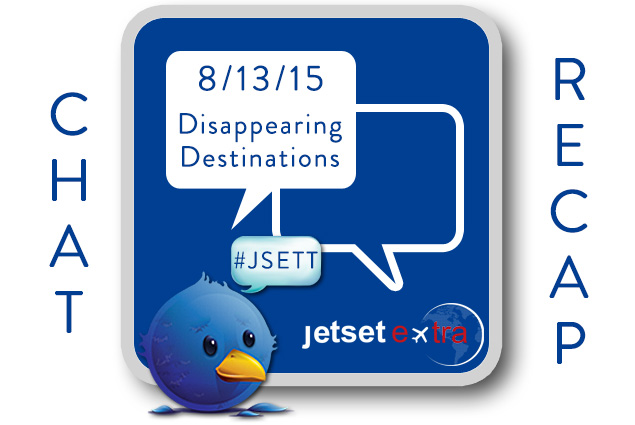 Our world is constantly changing, sometimes for worse and sometimes for the better. In our latest Twitter chat, we asked participants about the destinations they hope to visit sooner rather than later and the places they wish they could have seen in earlier days.

Q1: Do you think about the changing landscapes and social climates of some destinations? Are you eager to visit them before they change?

A1: Yes, it’s always nice to see a place before it gets TOO touristy #JSETT

A1 YES! Antarctica I hate the cold but I am so afraid by the time I make up my mind there will be nothing to see #Travel #JSETT @JetsetExtra

A1. I want to get back to East Africa because I fear with the poaching, this site may be just a memory #JSETT pic.twitter.com/kgSvqDBory

A1. Not really. Change is natural, entropy is inescapable; I just take each destination as it comes, when it comes. #JSETT

Q2: What places do you want to see before they are gone or changed forever?

Q3: Is there any place in the world you see changing for the better? What destinations could use some change?

A3: Our village #Utsjoki needs change! We need tourism to improve services and we are doing a lot to make that possible! #JSETT

A3: I really hope the Middle East changes for the better soon. Too much hate going around in some of those countries #JSETT

A3. NYC is *definitely* better for appealing to travel. Korea another success story! #JSETT

A3: Mexico is a great place to visit, and it’s working to provide first class services to our visitors #JSETT pic.twitter.com/S1bV84g4DS

Q4: Some places are just downright disappearing. How does that make you feel? How can we help the situation?

@JetsetExtra a4: sad & unfortunately it’s probably too late for some places. Try to make a conscious effort &go green when you can #JSETT

A4: Makes me feel like I need to buy some plane tickets ASAP and raise some awareness! #JSETT

#JSETT A4 depends why they are disappearing, some nice places overrun with tourists, ice bergs melt, lot of it can’t be easily changed

A4. I was so sad when I heard of the lose of sites in the Middle East cuz of ISIS. Palmyra, Nimrud, Ninevah … #JSETT

Q5: Do you think some lost destinations are just part of world evolution? Would we be as interested in them if they were still here?

A5: I think it helps us to appreciate things more. They’re old and won’t be here forever so we enjoy as much as we can whilst we can #jsett

A5. Interesting yes, but you wouldn’t have had a good time with the Aztecs or the Mongols. #JSETT @JETSETextra And no wi-fi.

Q6: If you could visit one destination that is now a lost culture or physical location, where would it be?

A6: I would like to go back and see Machu Picchu. Why did they leave? Why wasn’t it finished. So many questions! #jsett

A6: I would go no further than Mexico City on Aztec times. Watching those big pyramids in the middle of a lake would drive me crazy #JSETT