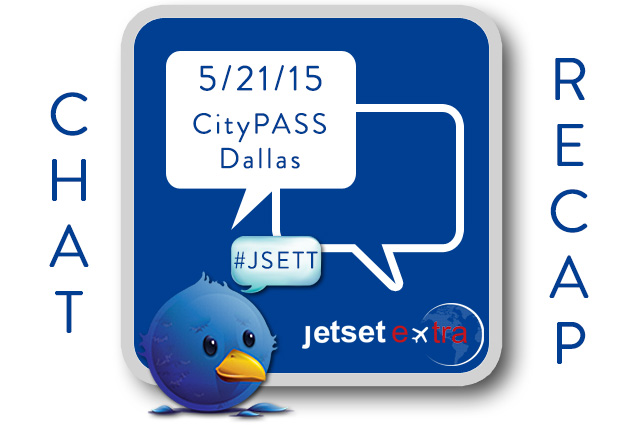 For this week’s Twitter chat, we teamed up with CityPASS to talk all about the newest city to join its collection: Dallas! Joining CityPASS in the chat were a few featured attractions in its Dallas ticket booklet—including Reunion Tower, Dallas Zoo, the Sixth Floor Museum, and the Dallas Arboretum and Botanical Garden—who, along with other participants, shared details about some of the city’s must-sees.

Thanks to all who joined! Here are some of our favorite tweets:

Q1: When you think of Dallas, Texas, what is the first thing that comes to mind?

A1 Dallas to me always equals this man #JSETT pic.twitter.com/GMuInBWd2E

A1.) The Cowboys, football and a fun trip to cover the Cotton Bowl in college! #JSETT

A2 Not been to @visit_dallas but would like to. I love #NYC of course and loved using my @CityPASS!! http://t.co/cVHxYdKxqB #JSETT

A2: Haven’t been, but there’s many others with great shopping & nightlife too. #Chicago, #Toronto, #Montreal, #NewYork, list goes on! #JSETT

A2: Dallas definitely has some of the best shopping anywhere. #sanfrancisco is another great town for shopping @JetsetExtra #JSETT

Q3: Dallas is synonymous with the word BIG: big food, fun, lifestyle. What other city have you seen that is BIG?

@JSETTchat Q3: NYC, of course. San Francisco and Philly also give off big vibes within the city limits. #JSETT

A3: #Tokyo and #HongKong are BIG for us! #JSETT Did NYC a couple times last year & loved it too.

The bigness in Dallas in part is the Metroplex. Takes awhile to drive from west side of Fort Worth to east side of Dallas #JSETT

Q4: In Dallas it’s illegal to modify the weather unless you warn residents via local newspaper. What other funny laws have you heard of?

@JSETTchat Q4: Heard of one place where it’s illegal to ride a donkey into town! #JSETT

A4. A city ordinance states that a person can’t go barefoot w/out first obtaining a special $5 permit! #Texas #JSETT

A4. The ridiculous one in #Somerville, #Massachusetts where you can’t drink beer outdoors unless with #food. #JSETT https://t.co/FdWRzEldgn

A4 Wisconsin law states (seriously) that cheese must be “highly pleasing”. Leave your Kraft Singles at home #JSETT

Q5: Dallas/Fort Worth International Airport is the ninth busiest in the world. Have you flown through? What’d you think?

A5. DFW is great – especially since it has free WiFi #JSETT

A5 It’s one of the better ones to be stuck on layover! #JSETT https://t.co/u7QyI1xg8O

A5: my experiences at DFW were great. Love flying through there. I also am happy southwest finally added a Dallas Love flight to MEM #JSETT

Q6: Some of the oddest fried delicacies available at the State Fair of Texas include fried beer and fried Coke. Would your try them?

A6: Oof my motto is always try everything twice…but fried coke? fried beer, sure! #JSETT

A6: Yes! Love to try different local foods! Had alligator in Florida 😉 and that was tasty! #JSETT