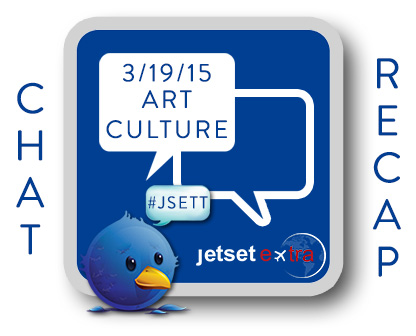 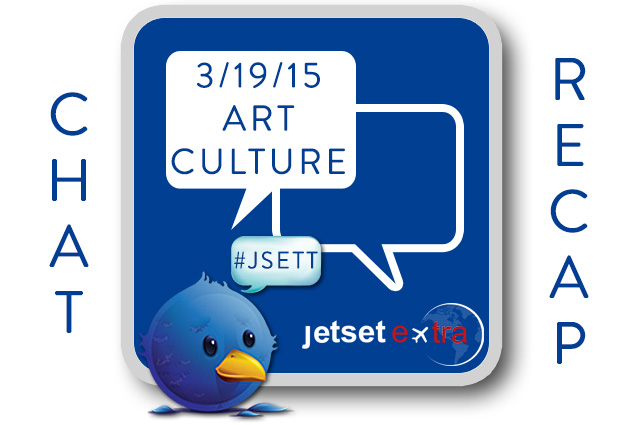 Do you seek out art during your travels, whether at a local gallery or museum or in a public space? Since this week’s #JSETT Twitter chat was sponsored by the Travel and Adventure Show, which is in Philadelphia this Saturday and Sunday, we were inspired to ask about your experiences with art culture. Thanks to all who joined! Here are some of our favorite answers:

Q1: The Philadelphia Museum of Art is one of the US’s largest art museums. Do you like to visit art museums? Do you have a favorite?

A1: I love visiting art museums. Two of my favorites include the Dalí museum in Figueres, Spain, and the Fundació Joan Miró in BCN. #JSETT

A1 I do enjoy art museums, but in moderation. Loved the @vangoghmuseum in #amsterdam. Very well curated #JSETT pic.twitter.com/yRoNq0bhpa

@JetsetExtra A1. I love exploring art museums. A couple of favourites – Uffizi Gallery & Accademia in Florence & the Louvre. #JSETT

Q2: Many Philadelphia art galleries stay open late for a First Friday event. Have you ever attended a local gallery “Art Walk”?

A2: not a “gallery” art walk by LA has an art walk through downtown that’s awesome! #JSETT

A2 Did it quite a bit in Portland, ME. First friday of the month. Great excuse to get out, walk around and explore some galleries #JSETT

@JetsetExtra A2) Tacoma and Fremont neighborhood in #Seattle have an Art Walk. I haven’t been on one but love those types of events #jsett

Q3: Philadelphia has more public art than any other American city. Have you encountered any memorable public art? Share a photo!

@JetsetExtra a3: love street art in LA and the benches in Chicago are all painted awesome! #JSETT pic.twitter.com/fc0z0Hnt3g

A3: Street art on NYC’s Lower East Side. There are terms/names for them too. #JSETT pic.twitter.com/THTpCi07uN

A3 Great street art in Shoreditch in London. Check out these gems #JSETT pic.twitter.com/tFtuIJPIjL

A3: The Picasso Open Air Museum in #Japan was a cool public art space! I actually really liked that one. #JSETT pic.twitter.com/36qvu9o3Vh

Q4: Philadelphia’s Mural Arts Program provides an outlet for graffiti artists. Are you a fan of street art? Do you have a favorite?

@JetsetExtra A4 I am a huge fan of Street Art (not tags) and I think it adds spunk to every city! #JSETT

A4 Love street art. Ran across this in San Juan, PR. Done by a Belgium artist I believe #JSETT pic.twitter.com/tonZ0OEbKF

A4. Costa Rica had some interesting street art! I wouldn’t know any artist… #JSETT pic.twitter.com/0Y0K9Aknz2

Q5: Philly’s Rodin Museum has the largest Rodin collection outside France. Do you seek out a particular artist’s work when traveling?

A5: It’s fun to find a #Banksy hidden in different cities. #JSETT @JetsetExtra

A5 Love the Rodin museum in Paris actually. Do love Van Gogh stuff too #JSETT

A5. I seek out historic architects in certain regions. I love OLD buildings with great history. Spain’s my fave. #JSETT

A5 Yes! I went to see this #Kaws exhibit when I was in NYC @JetsetExtra #JSETT Who also did a show in #Philly pic.twitter.com/Zf931e0cq9

Q6: If you created a work of art, what type would you make: painting, sculpture, or graffiti? What would the subject be?

@JetsetExtra a6: I’m better at photography than all the classes in mosaics, drawing, painting I’ve taken #jsett

A6: My art (painting or multimedia) would be surrealistic, cultural and colorful. #JSETT