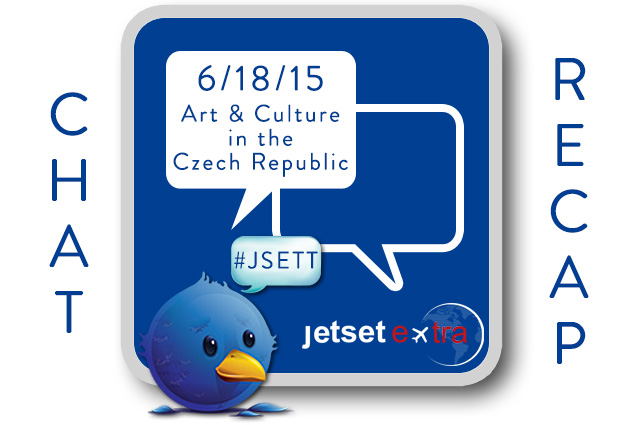 Q1: Hitler saved Prague because it was so beautiful. Have you ever seen a city so beautiful that it takes your breath away? #JSETT

A1 I have seen a city like that, it was this place in the Czech Republic called Prague #JSETT pic.twitter.com/10jypKAnoi

#Prague is the most beautiful city I’ve seen. Here is my proof. #JSETT pic.twitter.com/DEl79EOxFf

A1: The city views along the Malecon in #Havana #Cuba looked like a water painting. Breath. Taken. #JSETT pic.twitter.com/2skoV1Y7Uy

Q2: Alfons Mucha is a famous CZ artist known for his Art Nouveau. Have you seen his work in person? What is your favorite type of art? #JSETT

A2: Here’s a gallery of his art if the name doesn’t ring a bell. http://t.co/Kx8R3tKDsU @JSETTchat #Jsett

Q3: Cultural festivals take place throughout the year in CZ. Have you learned a cultural dance or tradition on your travels? #JSETT

@JSETTchat I did partake in some rather energetic traditional dancing in Ethiopia once as a group gathered around a bonfire. #JSETT

@JetsetExtra A3 I got to go to a private flamenco demonstration at a hostel in Madrid. There was a Q&A too. #JSETT

@JSETTchat A3 Experienced Capoeira in Brazil but wasn't brave enough to try it #JSETT pic.twitter.com/oz3m51VadG

A4.) Buckingham Palace, Syntagma Square in Athens, the guard shack changing of the guard in Prague. too. #JSETT pic.twitter.com/zsWUpfzgBG

RT @momfari: A4 I love this shot of these girls in #Flores, #Guatemala, wearing traditional Maya clothing. #JSETT pic.twitter.com/iA3f2MlmyF

Q5: Art Nouveau or Art Deco is famous throughout CZ in their architecture and interiors. What other city is defined by an art style? #JSETT

A2: I collect cheap street art wherever I travel, it reps the country so I love it! Like my art gallery? Lol #JSETT pic.twitter.com/Ivcr2PUEGz

A5 Certainly Riga is also an Art Nouveau capital. 40% of the center’s buildings are Art Nouveau! #JSETT pic.twitter.com/16wxW8lSG6

Q6: Its neighboring countries influence CZ’s food culture. What country do you find it most similar to? Do you like Czech food? #JSETT

@JSETTchat #JSETT A6: Czech food is based on Eastern European food and it influences neighbor countries as well. @JSETTchat

@JetsetExtra A6: I find it influenced heavily by Germany. #JSETT