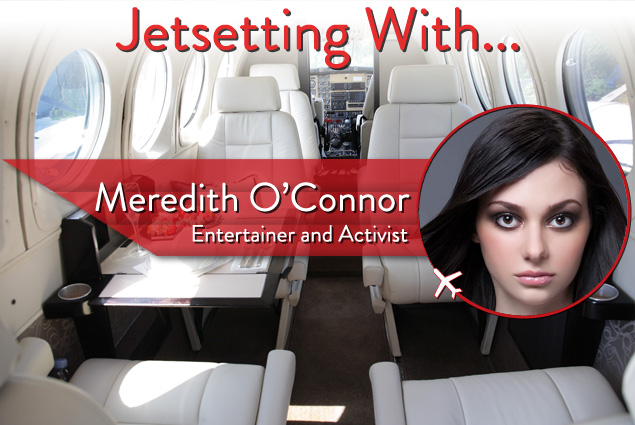 Meredith O’Connor not only charms fans with her music and film projects but also uses her powerful voice to help raise awareness about the negative effect bullying has on young people. The 18-year-old from Long Island, New York, travels the country to speak to schools about the topic and has also released a single, “The Game,” and will star in the crowd-sourced horror film “Red Head Randy,” which both recognize the seriousness of bullying. Whether traveling for business or for pleasure, Meredith still tries to explore her surroundings and discover a destination’s hidden gems. 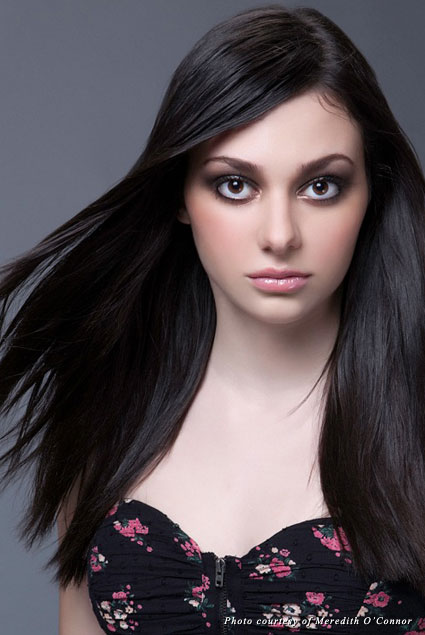 A:  Does ‘all of the above’ count? On tour, I went sightseeing whenever I could. I love seeing new places, beaches, parks, anything out of the ordinary.

A: I love to find quiet places or locations where people don’t often travel. It makes it that much more interesting.

A: I look up exotic places. I often search online for the most beautiful places to travel to or for the world’s coolest hotels. I have seen some pretty crazy places: underwater hotels, igloos, and all sorts of things. The next trip I take for fun will hopefully be one of those!

A: While in the Bahamas last year I took part in a feature film with Prince Lewis Projects. The trip was so memorable because the crew was made up of an amazing creative team, and although I was there for work it didn’t feel like it. Nathaniel Lewis (the owner of the company) really shows filmmakers how beautiful and relaxed the Bahamas can be, whether for work or for pleasure.

A: In Nashville I remember having lunch at a place called Hot Diggity Dogs and getting fried pickles. They were actually really good! They must be unique to Nashville because I asked for them when we toured in other states and got some strange looks.

A: My phone and the people I trust. I travel by many means and often don’t have the luxury, time, or memory to pack heavy since everything is always on the go. My phone holds the books I read, music of course, and movies, and it’s easy to remember. My phone is also easy to access, so song ideas that come to me can be written any time.

A: Pack light, and don’t plan too much. I like to play things by ear when traveling for fun because you often discover new things when you arrive at a place that you didn’t just read about online. Of course, I have things I set out to do, but I feel the more adjustable I am the more things I end up seeing.

A: Nashville! People were so friendly there. I met fans, music professionals, and other artists that were all so passionate about music.

A: Well my brother, cousins, and I have a cabin in Pennsylvania by a lake. I love to go there because it is where my family visited while growing up and we wanted to keep the house in the family. It’s also peaceful and quiet up there. The Northeast can be horribly cold, but in the warm weather it has a beauty of its own that cannot be found anywhere else.

A: Next? Here’s looking to a tour in Australia. That would be so much fun for my team and me. It’s a personal goal of mine.

A: I just had a 24-hour premiere on May 8 and 9 with two live shows—one in New York City and one in Los Angeles—to benefit the #beyou campaign. This was the premiere of the video for my song “Just the Thing” starring Degrassi’s Luke Bilyk and me.

Singer/songwriter, actress, and model Meredith O’Connor is using her talents for more than just artistic pleasure. At just 18 years old, this anti-bullying activist from Long Island, New York, is currently touring schools across the country to spread awareness of the dangers and effects that bullying has on students. Having been bullied as a child, Meredith is extremely devoted to using her powerful voice and strong songwriting abilities to inspire young individuals to take a stand, ignore the labels, and not subjugate themselves to fear.

Meredith recently released her new single, “Just the Thing,” which she co-wrote with Heather Holly and followed it up with a dual-city video release event in New York City and Los Angeles.

Meredith’s fun-loving pop/rock musical talent sparked recognition in February 2013 with her YouTube hit single “Celebrity,” which has almost 3 million views to date. Her second single, “The Game,” was written unequivocally to address bullying and was composed to touch the lives of young individuals, which has consequently created a strong fan-base for Meredith. On April 30, Meredith performed “The Game,” along with her new single “Just the Thing,” at the Elevate Your Glass Against Bulling Banquet in New York City, hosted by the JASM Company, where half of all proceeds were donated to Lady Gaga’s Born This Way Foundation. Additionally, Meredith looks forward to the release of “Red Head Randy,” a crowd-sourced horror film that recognizes the seriousness of bullying, in which Meredith plays the lead role.

Meredith’s advocacy for victims of bullying goes further than her strong vocals and skillful acting capability. This young activist’s effort to put a stop to bullying in schools has also led her to become an official advisor, writer, and speaker for the non-profit organization Reach Out.