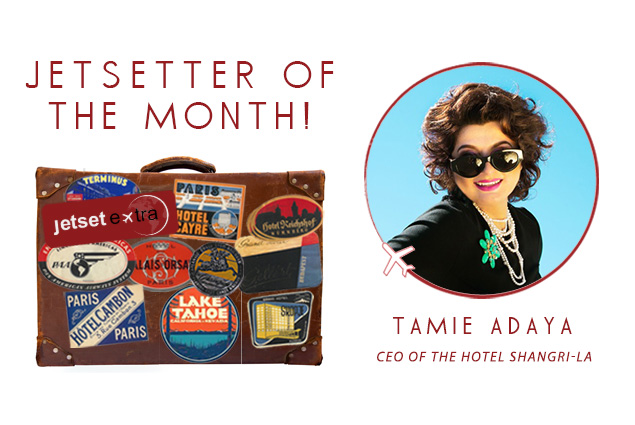 Coco Chanel once said, “A girl should be two things: who and what she wants.” Tamie Adaya, president and CEO of the Hotel Shangri-la at The Ocean, has turned that quote into her inspiration and created a space where her philosophy could thrive. Introduced to travel and hospitality at a very young age, Tamie has held dinner parties and salons since adolescence; she feels the hotel is an extension of her innate desire to host and entertain. “I believe in liberation of the individual,” Tamie says, “and I always loved the Hotel Shangri-la is a realm where inhibitions melt away.”

At her hotel, Tamie works to create a culture of warmth, sensuality, and self-acceptance—qualities she hopes people will promote in their own lives. Tamie’s father, Ahmed Adaya, purchased the hotel in the 1980s; she took over his position in 2004 and launched into an award winning renovation. “Hotel Shangri-la is a paradise, a utopia that sustains guests long after they depart,” she says, adding, “Visitors leave feeling liberated, knowing they have found a sanctuary, a safe harbor, and a place where they can relinquish their quotidian concerns.”

Though she considers herself a world citizen, Tamie says London has a special place in her heart. Calling it her “spiritual home,” Tamie explains the city’s reverence for both rebellion and tradition fuels something she calls British Style Genius. She feels Britain’s cultural dynamism and sense of design is, for her, unparalleled and claims that, in terms of sensibility, the Hotel Shangri-la is the United Kingdom’s most westerly colony.

Though Tamie draws from British style, she also takes inspiration from her hotel’s sunny location: on the California coast in Santa Monica. Its Los Angles location means she is minutes from Rodeo Drive, Malibu, Venice, Hollywood, and of course Los Angeles International Airport—for when the world traveler needs to get away.

In addition to hotel president and CEO, Tamie can also add author to her résumé. She released the “Hotel Shangri-la Diamond Jubilee Book” earlier this year to memorialize the LA institution, share the hotel’s history, and reveal some of its famous guests.

While honoring the property’s past, Tamie looks toward the future, predicting hospitality will become a more emotionally and intellectually sophisticated domain. “Long gone are the days where a traveler simply wants the most luxurious accommodation they can afford,” she says. “People crave an experience that is both affirming and transformative, both challenging and comforting, at the same time.”

Travel, she says, creates perspective—an insight to not only ourselves but also the world at large. Tamie’s advice for fellow travelers is to pursue experiences that either are deeply pleasurable, nourishing, and nurturing or “will have an alchemic effect on how you see yourself and the world at large.” So do as Tamie does: Channel Coco Chanel and use travel to, “Liberate yourself, transform who you are, or affirm who and want you want to be.”