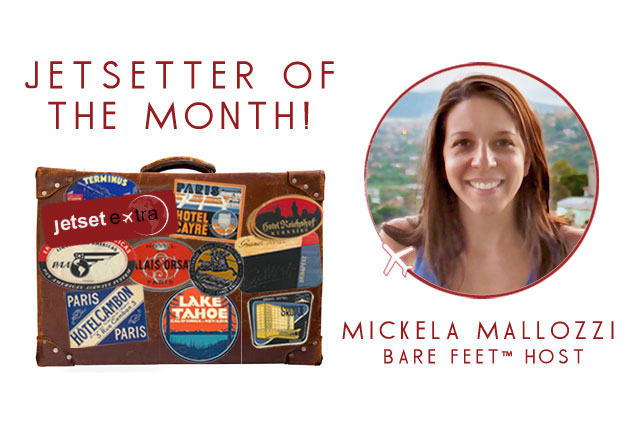 It seems every avid traveler has a moment. The one when things just clicked and travel suddenly became a way of life. For Mickela Mallozzi, host and producer of the web series Bare Feet™, that moment came in college while she was studying abroad in Florence, Italy. “I had a taste of what traveling alone felt like, and I got hooked,” Mickela says, adding, “Ever since that time, I made it a point to make at least one big trip a year.” A dancer for more than 25 years, Mickela left the corporate life and became a full-time dance teacher in 2008, a move that inspired her to combine her two passions, travel and dance, to create the ideal career. Bare Feet™ was born. 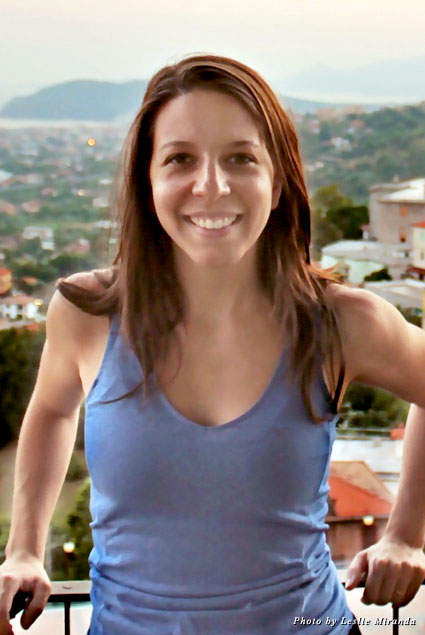 “When I travel, I want to genuinely connect with the people of the place I am visiting; to me, that is the only way to really get to know a destination,” Mickela says. “I found during my travels I was naturally drawn to local festivals, holidays, and celebrations.” She realized she was seeking out these events because the locals would be dancing their traditional style of dance. Her Bare Feet™ blog documents her dance adventures around the world and evolved into the Bare Feet™ web series in 2012.

Mickela chose to begin her Bare Feet™ journey in her family’s hometown of Minturno, Italy, because, “I figured I couldn’t experience the rest of the world’s dance cultures until I discovered my own first.” During this time of self-discovery, Mickela says she felt an intense connection to the place where her parents were born. She had the opportunity to dance with i Guillari, the oldest folk group, in the annual Sagra Delle Regne (the Wheat Festival) and recalls the entire experience was emotionally overwhelming. This, Mickela says, validated her decision to start Bare Feet™. At that moment, she knew she had found her calling.

“I am a dancer, and I love to dance, but I am always stepping out of my comfort zone when I travel as I’m introducing myself to complete strangers and asking them to dance with me,” Mickela says. Her advice for travelers is to do something that scares you, even a little bit, and “amazing experiences and travel memories will come from it.”

For Mickela, stepping out of her comfort zone has led her to meet many characters in her life story, from Cowboy “Tex” in Colorado, who taught her to line dance and two-step, to Fernando, her tango partner in Buenos Aires, Argentina, who showed her the addictive improvisational side of the dance. There was also the girl who gave Mickela her hat as they danced during the Asrlar Sadosi Festival in Navoi, Uzbekistan; 85-year-old Gilbert in San Juan, Puerto Rico, who was Mickela’s salsa partner at a beach bar in the neighborhood of Loiza; and Ben, one of the “Friday Night Fixtures” at the Friday Night Jamboree in Floyd, Virginia, who taught Mickela how to clog. “All of these interactions are unforgettable, and not one of them is more significant than the other,” she says.

Mickela says she fell love with Buenos Aires. “I’ve already been there twice, and I could see myself going over and over again,” she says. The reason why: the tango, a popular Argentinian dance. “Dancing the tango is such an addictive drug,” Mickela explains, adding she has met people who started to pick up tango and decided to move their lives to Argentina. “The fact something like that happens quite often says a lot about the dance culture there; it’s incredible,” she says.

Buenos Aires is, of course, one of Mickela’s recommendations as a bucket list destination, not only for the tango but also the incredible food, music, museums, markets, nightlife, sightseeing, and people. It is a place, she says, that offers everything a grand city might yet can still have a small-town feel, depending on where you are. She gets asked often about Puerto Rico, she says, since her video about the dance culture in San Juan didn’t just focus on salsa. “I think that is why it really made an impression with so many viewers,” she says. “I honestly did not know very much about [the musical style] bomba until I visited the island, and I fell completely in love with the rhythms and the dance and the history of it all!” It seems, she explains, a lot of visitors to Loiza, where bomba comes from, never discover this art form even through the area is a culturally rich part of the city. Mickela’s video did its part to help spark interest outside of the salsa world.

“I see more and more people wanting to have an ‘authentic’ experience in travel, and I think that’s wonderful,” she says. She credits companies such as Airbnb, where people’s homes are open for accommodations, as showing how much more social people are becoming. And with social media, Mickela says she is able to connect with more travelers once she is in a city than ever before.

Travel also doesn’t cost as much as you think, Mickela says. She recalls spending a lot of money creating her first series, Bare Feet™ in Italy, but “If I had known what I know now, I would have cut the costs by a third, at least!” Her advice: “If you want to travel, just do it; there are so many ways to travel inexpensively.” She also urges aspiring travel bloggers or vloggers to not spend a lot of money on equipment but instead shoot videos on an iPhone and edit them in iMovie. “As long as you’re telling a compelling story, you’ll be set!” she says.

Ever time she travels someplace new, Mickela says, she not only learns about a different culture but she also learns a lot about herself. She hopes to visit as many countries as possible to get a taste of each dance and music culture so, once she’s experienced a destination, she can move on to the next. She says there is no country to which she would refuse a return visit. “Though I might have challenging experiences in a country or city, that doesn’t mean I disregard it forever; every place has something wonderful to offer, and as a professional traveler it is my duty to find those wonderful experiences so I can share them with my audience.”

Travel, Mickela explains, is a form of education you could never find in a classroom. Authentic life experiences encountered while traveling can help shape a person and teach them basic problem-solving skills. The most important aspect of travel, Mickela says, is meeting people from all different walks of life. “If you surround yourself with the same people from the same place everyday, your views of the world can be very narrow, and the level of empathy you might have for others could be limited,” Mickela says. “But by meeting people from different socio and economic backgrounds, different races, different customs, different religions, and different beliefs, you might have a higher level of acceptance and understanding for all people.”