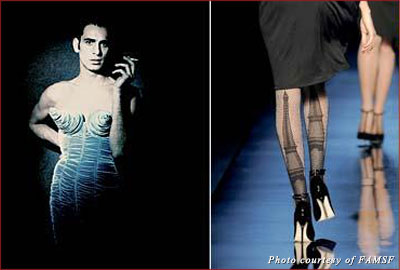 Dresses made of hand-woven lace, animal skins, furs, and feathers, as well as of worn out jeans and plastic garbage bags get equal attention from their creator – the cone-bra-and-corset genius Jean Paul Gaultier.

A major exhibition – The Fashion World of Jean Paul Gaultier: From the Sidewalk to the Catwalk – is now open at the de Young Museum in San Francisco. The exhibit is enlivened by animated mannequins with projected faces – singing mermaids, winking sailors, and preaching virgins. There are lavish beadwork outfits, the making of which required thousands of working hours; body stockings evocative of flayed skin, blood circulation system, and bones made of black lace and sequins, and other mind-boggling garments.

The sheer theatricality of the show defies the notion of a sidewalk, but there is a mock catwalk in one of the last galleries of the exhibition of the outrageously imaginative, endlessly diverse, and meticulously-detailed creations of the living icon of French fashion. 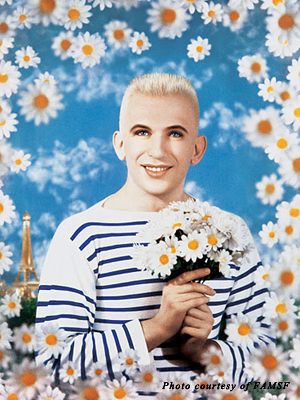 Present at the exhibition opening at the de Young Museum, Mr. Gaultier – approachable, down-to-earth, and dashing – told the guests and media about his childhood inspirations: a film about a couturiere he liked to watch; his grandmother who always wore corsets; and his teddy bear, whom he liked to dress as a Folies Bergere dancer using duster feathers for a headdress.

Nathalie Bondil, Director and Chief Curator of the Montreal Museum of Fine Arts, where the The Fashion World of Jean Paul Gaultier show originated, said that she “wanted to create an exhibition on Jean Paul Gaultier… because of his great humanity. Beyond the technical virtuosity, an unbridled imagination, and ground-breaking artistic collaborations, Gaultier offers an open-minded vision of society, a crazy, sensitive, and sassy world in which everyone can assert his or her own identity through a unique ‘fusion couture.’” Indeed, Mr. Gaultier’s dedication to “equality, diversity, and perversity” is tangible in the exhibition. Or, as Maestro himself put it, “Beauty is everywhere.” 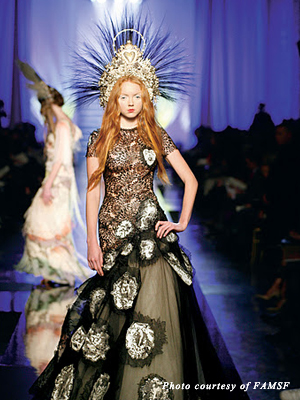 The de Young is the exclusive West Coast venue for this international exhibition.

The Fashion World of Jean Paul Gaultier: From the Sidewalk to the Catwalk is on view from March 24 through August 19, 2012 at the de Young Museum located at 50 Hagiwara Tea Garden Drive, Golden Gate Park, San Francisco. Call (415) 750-3600 or visit their website.