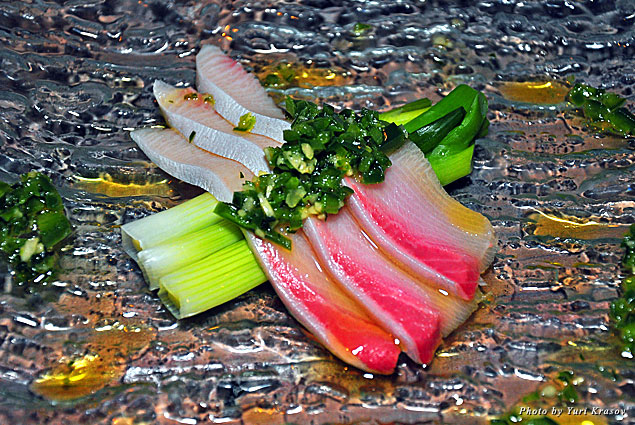 With the growing sophistication of the dining public in the United States, very special eating and drinking establishments from faraway lands unfold everywhere like spring blossoms, offering incredible delights to those who can appreciate them. 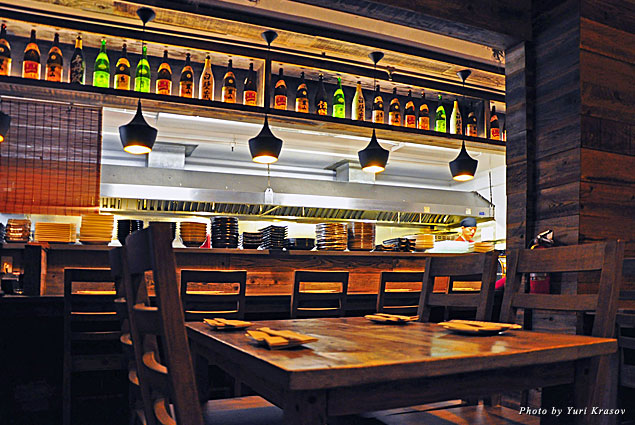 In San Francisco, the acknowledged food capital of the West, several traditional Japanese izakaya-style restaurants sprung up in hip neighborhoods in recent months. The trendy Fillmore District newcomer Izakaya Hashibiro Kou made its presence known with a warm reclaimed wood and designer light fixtures ambiance, fast and attentive service, private tatami rooms, custom clay dishes, and sake flights, but most of all, of course, with its perfectly executed small and not-so-small plates created by executive chef Nick Yoon (originally from Seoul), chef de cuisine Jay Yang, and a clockwork team of cooks behind the open kitchen counter. 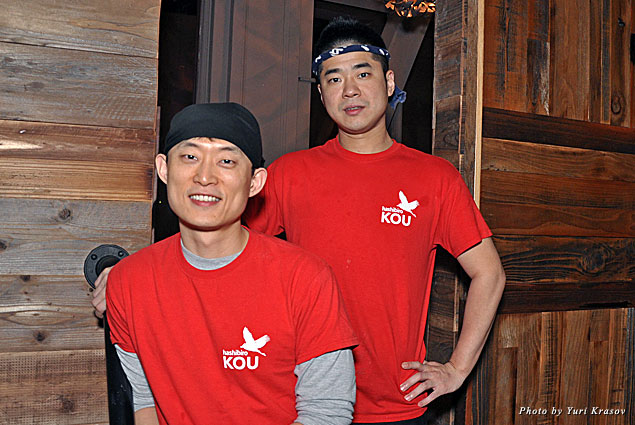 On the night we dined, the freshest Hamachi carpaccio arrived on a wavy glass plate as if floating on water. Glistening and brightly colored slices of fish were placed atop green onion stalks, soaked in cold water to remove the harsh spicy bite, and topped with a relish of green chilies and mint—an utterly refreshing combination.

For kalbi tempura from the Fried menu, Korean-style boneless short ribs were given a Japanese makeover in a light coat of golden-brown dough. Their sweet succulence was nicely contrasted with pickled red onion and baby arugula and enhanced with sesame-ponzu drizzle. 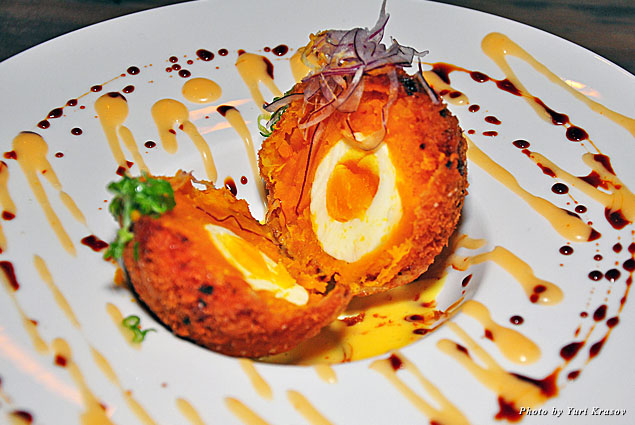 The next thing we tried from the Small Dish menu was a highly unusual and undeniably creative kabocha croquette—a perfectly boiled egg with firm, pliable white and soft yolk, embedded in a bright orange squash casting then deep-fried in panko breading. I thought this distant relative of the original French croquettes from the 17th century royal court was not only delicious and nutritious but might even work as a healthy breakfast with its high beta-carotene count and all the vitamins and fiber neatly packed in.

The first item on the Grilled menu, gindara misozuke, or miso-marinated black cod, could not be missed for its sheer tenderness—a rare fish preparation that literally melts in your mouth. Served with a wedge of lemon and pickled ginger, it usually disappears from the plate fast, as if inhaled by Izakaya Kou diners.

Some of the most popular items are found on the Yakitori menu. We picked a trio of skewers served in pairs and intended for sharing: chicken tsukune (neat and delicious chicken-and-herbs meatballs), bacon enoki (tender tufts of tiny white mushrooms wrapped in bacon), and shishito (small slightly hot grilled green peppers).

Sake flights, representative of the Izakaya Kou extensive sake menu, usually consist of four samplings from various categories—junmai, ginjo, daiginjo, and honjozo—providing a welcome accompaniment to food and showcasing the very essence of the drinking (and eating) establishment. 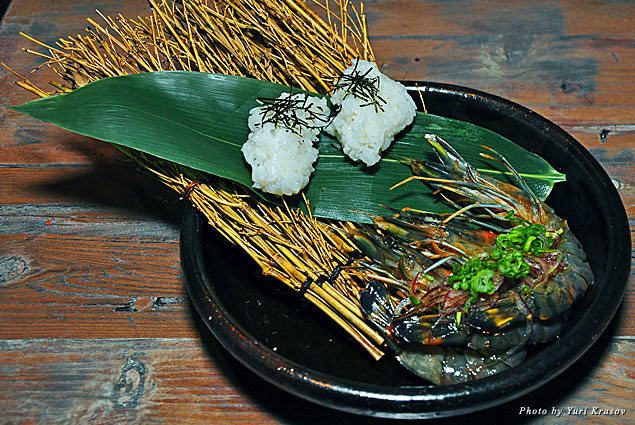 Seeing that we were thoroughly enjoying all the wonderful offerings from the kitchen, our server finally recommended kuruma ebi zuke, row King prawns fermented in soy sauce marinade for a week and served head-on with a side of sushi rice. That was the most amazing of all the small dishes, and the one I would definitely come back for! 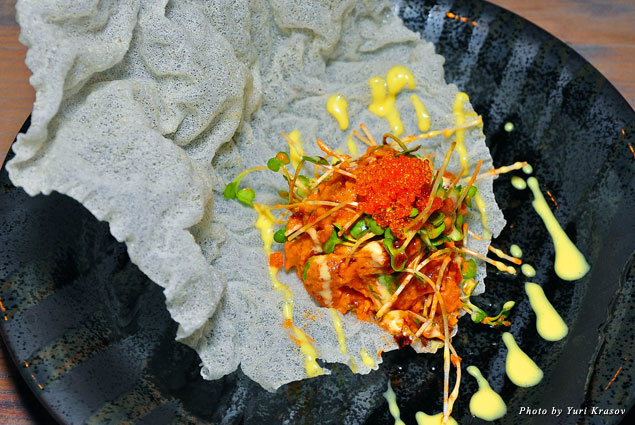 Finally, we were lucky enough to try the brand-new dish, created by chef Nick on that very night, called Spicy Pearl. This elaborate dish presented spicy tuna topped with micro greens and tobiko and was dressed with honey mustard vinaigrette like a “pearl” on a “shell” of rice paper against the dramatic backdrop of an artisanal black ceramic plate.

No Izakaya dinner would be complete without a bowl of fragrant noodle soup, and our choice was Nagasaki ramen with seafood and vegetables in spicy pork and chicken broth.

For dessert, we discovered our new favorite treat: frozen whole persimmons with a side of plum juice.

As always, throughout the entire meal, our teacups were kept filled with toasty genmai cha—a delightful combination of green tea and roasted brown rice.