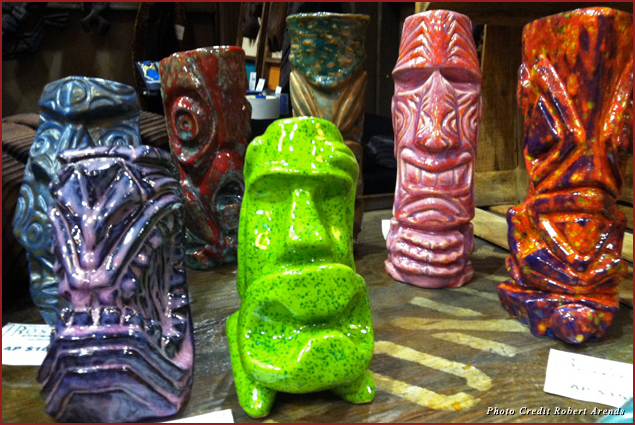 The music was loud. The mai tais were good. The vibe was tiki-freaky wonderful…

I was in tiki heaven! This was my first time at Tiki Oasis – the joyous, wacky and largest annual gathering of Polynesian pop culture and tiki fanatics on the West Coast. 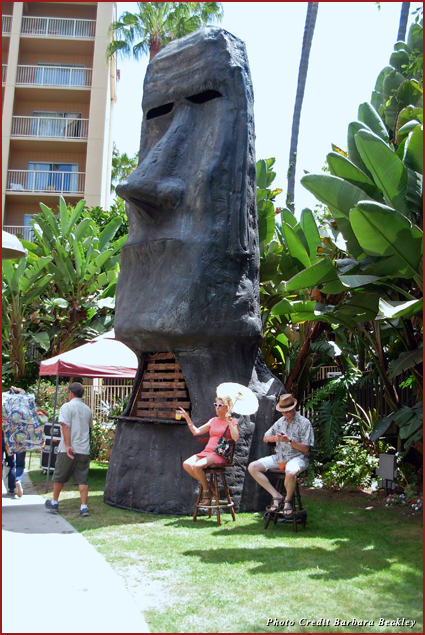 Enthusiasts fly in from as far away as Germany and Thailand to talk tiki, slurp mai tais and party with 3,000 other devotees at the Crowne Plaza San Diego. (The Crowne Plaza used to be the local-favorite Hanalei Hotel, so it packs plenty of Polynesian punch.)

Like the mai tai I was sipping – Tiki Oasis, which just went down August 16 – 19, is a sweet concoction of potent ingredients for all tiki tastes. 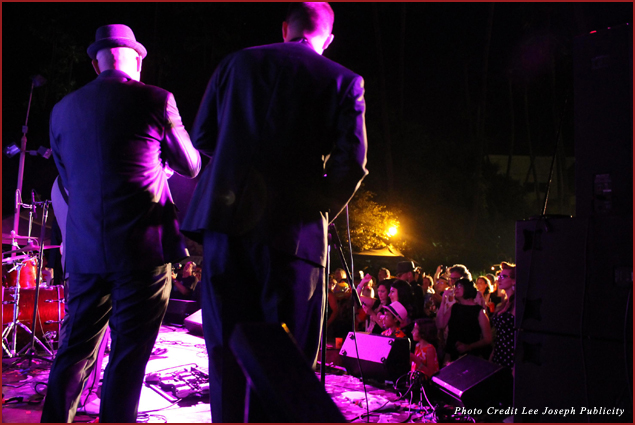 And costumed partiers roamed the halls into the wee hours – hopping from one private room party to the next — swizzling rum and dancing the night away. For me, the first priority – after a mai tai – was shopping. 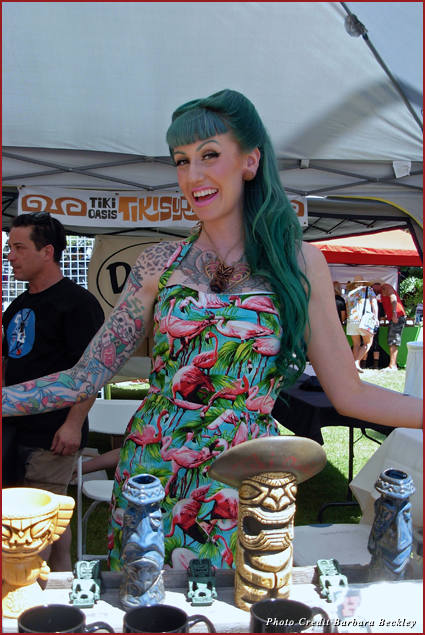 Nikki Napalm, a glamorous young make-up artist in a flamingo-print sun dress, greeted me at the Tiki Oasis gift booth. “Be sure and check the elevators for silly signs,” she told me.

Before I could, I was captivated by Tiki Thai Arts. “Tikis in Thailand?” I asked in amazement inside the poolside suite-turned-boutique. Tikis and Thailand are my two favorite things. Sure enough. Brian Wood, a.k.a. artist TAT, originally from Santa Monica, enjoys artistic inspiration at his home in Chiang Mai. I walked away with one of his somewhat mystical-looking prints in a beautifully carved frame. 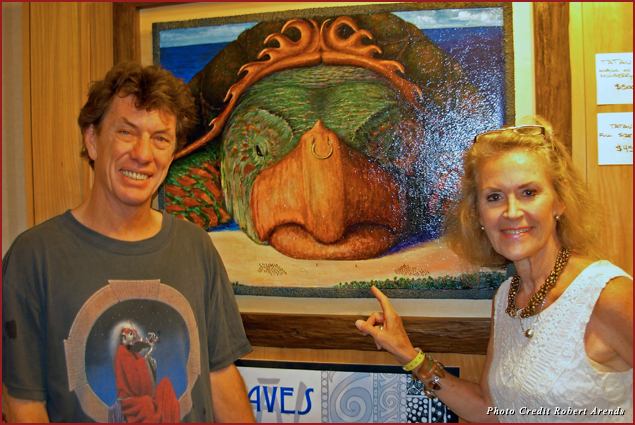 Nearby, a man was on his knees carving a chunk of palm tree trunk into a tiki face. He’d flown in from Germany. “Not much of a tiki scene in Germany. That’s why I come here,” Alexander Thalhofer told me. A plush tiki doggie toy was poodle perfect at the Tiki Paws table. 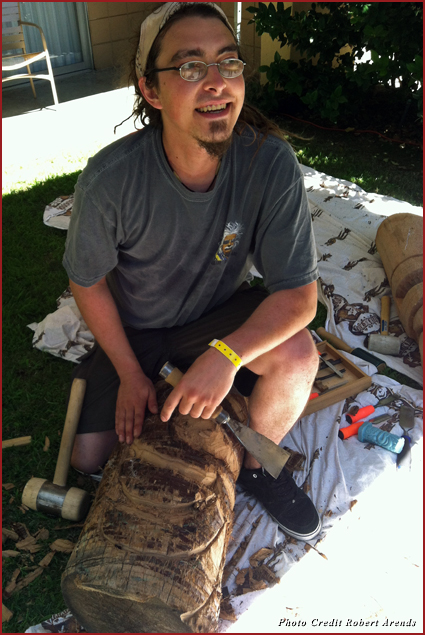 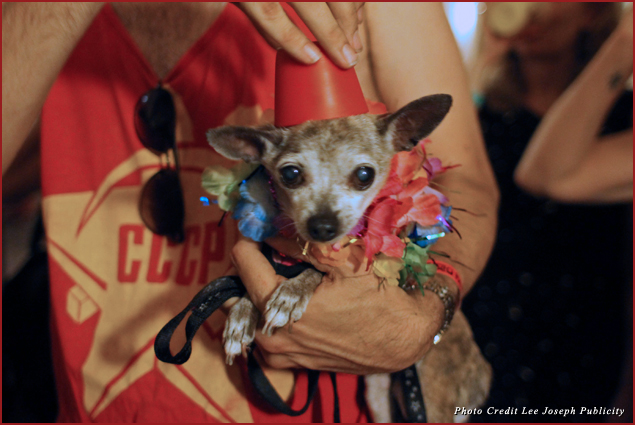 And who doesn’t need a group drinking vessel – the kind that 10 or so best friends can dip a straw into together. Eric October, a noted ceramicist, was at the ready, with a huge hibiscus-shaped drinking bowl.

Shag was signing his works in person. I couldn’t resist official Tiki Oasis charm bracelet – glittery images of the blowfish, tiki face and his other famous icons. He only made 125, Monet Orystick, The Shag Store gallery manager, said. “But he can’t sign a bracelet,” I moaned. “No worries.” Monet slipped me one of Shag’s 1960s-style plastic coin purses, which he inked with his signature and a martini glass. 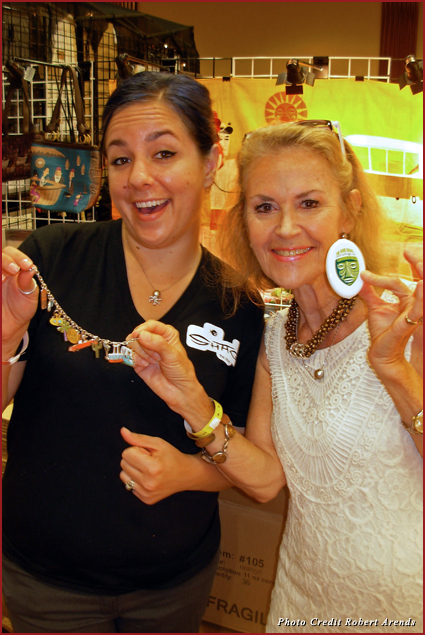 A pristine pair of mid-century copper panther wall plaques became mine at Grass Shack Traders. Turns out owner Gene Sweeney of Oceanside also sells Tahiti as a travel destination. Sign me up!

It wasn’t the tiki piñatas (very expensive and innovative) by Tom Cooper that impressed me as much as his paintings of tikis in jungle settings. I visit the far South Pacific (Tahiti, Fiji, the Cook Islands) frequently and know that the ancient Polynesians lived in the forests not on the beach. His tikis spoke to me of the real thing. 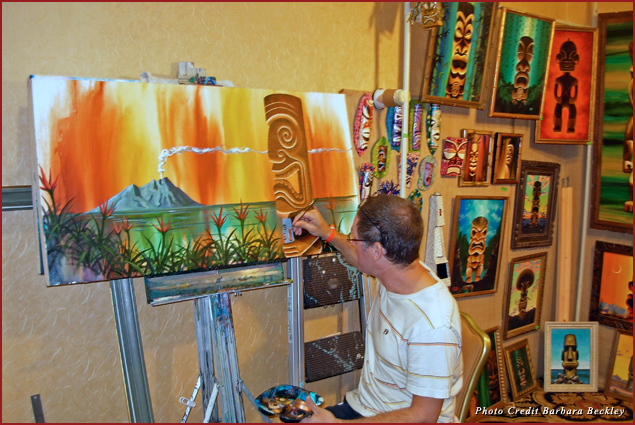 As night rolled around, the tikis – or maybe it was the mai tais – were talking big time.

On stage, slinky models in the Retro Diva Fashion Show were glamming it up in ‘40s and ‘50s originals; King Kukulele was emceeing and The Love Me Nots and The Barbwires were jamming. The grounds around the outdoor main stage were packed. Folks who planned ahead relaxed in lawn chairs close to the stage, while the rest of us watched on our feet, chatted and hit the drink stations.

Suddenly, a creepy tiki head peered over my shoulder. “You come here often?” it asked. I turned in delighted surprise. The brown, sneering face was on the hand of puppet-maker Dave Haaz-Baroque of the Shadow Circus Creature Theatre. 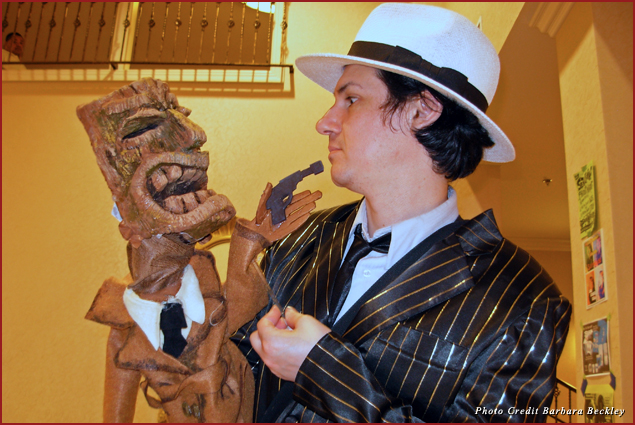 A couple dressed in trench coats and grass skirts twirled by. They’d been contestants in the Secret Agent Costume Contest in honor of this year’s theme, “Exotic Espionage and Polynesian Pulp.” Women in gold lame sun suits and a knife strapped to one leg were everywhere. And one stunning golden girl – literally – was covered head-to-toe in gold a la the girl in Goldfinger. They’d been at the Art Show Artist Reception, hosted by the Agents of A.L.O.H.A., with the Man from T.I.K.I. and the evil agents of S.O.B.E.R. You have to be there to love the crazy theme details.

A different talking tiki head waylaid me on the way to the late night Exotic Espionage Dance Party and Midnight at Tiki Oasis: Femme Fatale Follies, emceed by Marina the Fire-Eating Mermaid. “Pace yourself,” the man inside the oversized blue tiki totem, whispered. “What’s your name?” I asked. “They call me ‘Maoi Man’.”

Checking an elevator for silly signs, I saw one announcing a room party. These after-hours soirees are all part of the Tiki Oasis culture, Ronald May, a tiki architectural enthusiast, explained the next day. The parties are open to all, thrown by Tiki Oasis regulars and tiki merchandise-related companies. Appleton, Mount Gay, Brugal and other rum-makers sponsored numerous tastings and mixology events.

It was 2:30 am when I peeked into the suite – it was packed and the band was sizzling. But, I didn’t want to miss the classic car show in the morning. So, remembering what Maoi Man had said, I put down my empty mai tai glass and returned to my hotel room.

So much to do and so little time – it’s a constant Tiki Oasis dilemma. And the perfect reason to return next year. This was the 12th annual – and it won’t be my last. After all – I have to show off my new shark dashboard hula doll.

You can celebrate sooner – I will be — at Taboo Tiki, a smaller but equally tantalizing tiki fest, October 5-7, 2012 at the Royal Sun Inn, Palm Springs.

The Sofia Hotel in San Diego Tasting the Gaslamp Quarter