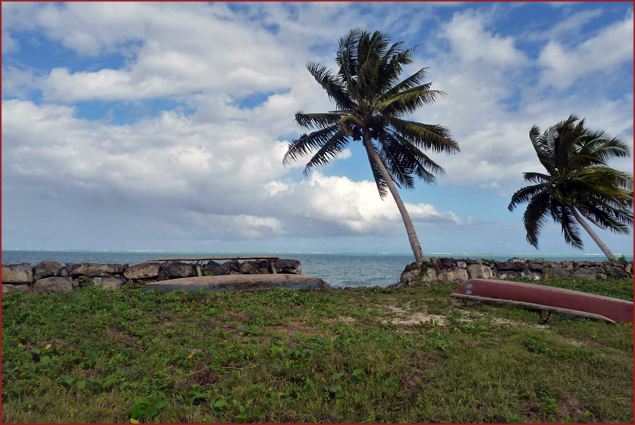 Leaving Los Angeles for a summer of sun in Samoa and the South Pacific, I had no idea of the survivor stories that would unfold so quickly. It took us nearly three days just to get there, as we had a 15-hour layover in Fiji and after landing, I could tell George was exhausted.

We’d left Los Angeles Wednesday near midnight and flew 10 hours to arrive on Friday in Nadi, Fiji.For our all-day Fiji layover, we took a 30-minute ride on the Tiger IV Catamaran and spent the day at Treasure Island. The weather did not cooperate, but we relaxed by the pool and ate the Mongolian buffet (clearly none of the cooks had ever seen Mongolia).

After that day of adventure, we barely made our bus back to the airport for our flight to Samoa.We finally arrived Thursday night. Our driver from the airport tried to chat with us on the hour-long ride but we could not keep our eyes open.

Right away we were told that they were filming the television show Survivor to the west of our fale in Virgin Cove. “Don’t go that way,” the security guard said. It is never good to tell George what not to do, as he immediately only wants to do that one thing. After hearing that the local village would be fined if we showed up, we promised to follow directions. We didn’t realize that the next evening I would have my own Survivor moment, waking up outside the communal toilet with my chin in the dirt. But let’s not get too far ahead.

Virgin Cove is a lovely spot, but when we arrived at night after days of travel, our fale looked as it was a large empty oval with a piece of foam on the floor and a mosquito net and palm-frond sides. I decided we could think more about the room after sleeping, and we were too tired and jet-lagged to do anything but sleep that night.

Upon completing a journey of 100 steps to the bathroom, we could see the gorgeous azure seas and could not wait to explore the calm waters for snorkeling. There were palm trees lining the dirt path and we could see the other fales. George thought they were closer to the water but we were closer to the bathroom. After a breakfast with eggs (included in our 144T per-night price, $70USD—although now you do have to pay extra for the eggs), we were ready to snorkel. Our new Aussie friends thought the snorkeling was great; our vote—fair.

Following our day by the sea, we indulged in a buffet dinner of many nasty inedible delicacies like baby octopus, squid ink pasta, roasted baby suckling pig, and things I can eat but would have far too much of over the summer – like taro root and fresh fish (my favorite), and chicken with rice, a combo that came back to haunt me. With dinner consumed, we attended a fiafia (traditional dancing and fire show) and later went to sleep on our mat.

Around 1:30am, I started my first of my journeys to the common bathroom. Over an hour of painful cramps and diarrhea was in store for me but I was shocked when I woke up on the ground. I had fainted at the edge of the steps. I regained consciousness, scraped and bruised on both arms and chin. I guess when I needed to go to the bathroom again and again I should have woken George, especially after falling down, but I was so stunned that I ended up face-planted on the ground, I wasn’t thinking clearly. Back in our room I lay on the mat, moaning. George woke up and asked what was wrong. After my telling my tale of woe, he offered to help. Because of his concern and despite the many explosions earlier on, I was finally able to go rest. 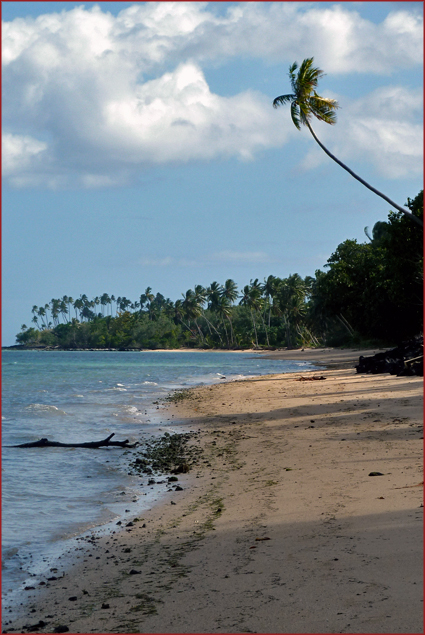 The next day, after noticing more war wounds from my experience, I said, “I need Horatio,” which inspired a long discussion of CSI with another group of new Aussie friends. It turned out that many who had the chicken at dinner had a long and difficult night! But I survived and was well enough to eat breakfast. I was surprised that I could eat at all after my night of adventure. I did enjoy the eggs, hot toast, and fresh fruit. Finally, sleeping on the ground wasn’t too bad, and the hotel’s location in Upolu was lovely. We had many great walks and fresh fish meals. Our Samoan summer had begun with a good start of surviving and thriving.

More videos on our youtube channel. To see more posts go to We Said Go Travel.