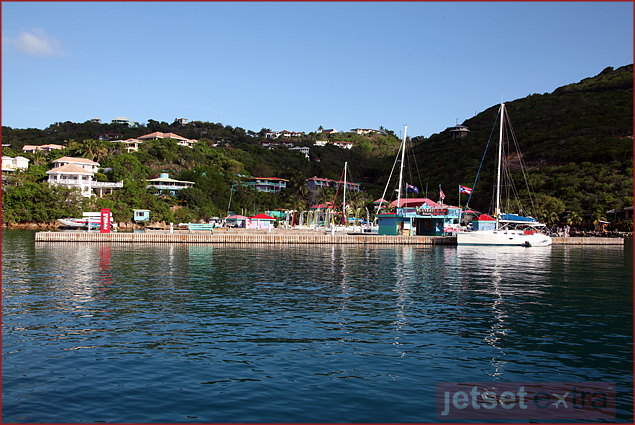 In the British Virgin Islands, 120 boats doesn’t sound like much, unless you bring them all to Leverick Bay and start them out on an all day, multi-island high-stakes card game. Now you’ve got something!

Nick Willis and his wife Monica, the managers of the Leverick Bay Resort and Marina, started the tradition when they put Leverick Bay on the local events map with the first annual BVI Poker Run in 2002. The idea was simple – local boats would cruise around the BVI making five stops and collecting a playing card at each, and the best poker hand would win the competition. 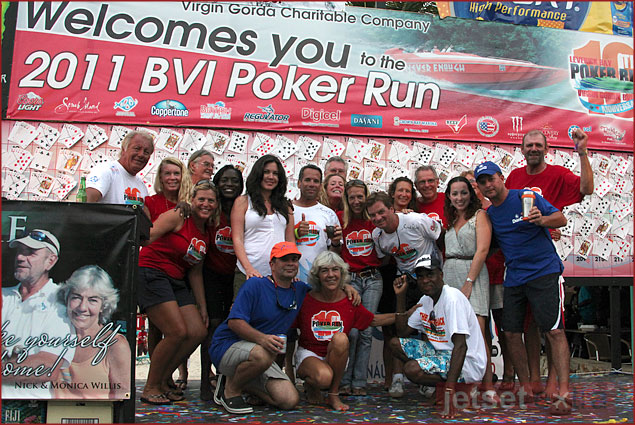 At the inaugural event, 12 boats arrived from Puerto Rico and the BVI to compete. After five years, there were 80 boats, and the number has risen steadily each year and has evolved into what could arguably be called a national holiday in the BVI.

This year, 120 boats participated in the all-day event. It ended with a proper BVI party and prize-giving at Leverick Bay. For 24 hours, Leverick Bay was transformed from a tranquil beachfront resort to a circus of brightly colored, powered-up boats and their crews, and had an energy not to be found anywhere else in the Caribbean. The nearly deafening engine barks and a wild crowd of thousands with helicopters flying overhead is a sharp contrast to the usual atmosphere of Leverick Bay. 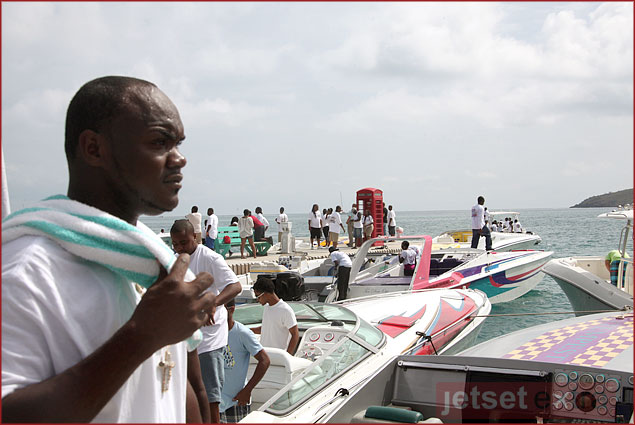 Unlike a typical boat race, the BVI Poker Run is designed to give all of the participants a fair shot at the top prize, regardless of how fast their boats are or how long they decide to relax during lunch or at each stop. This makes it a great event to get friends and family together and beg, borrow, or steal a boat for the day to explore the BVI.

The party afterward at Leverick Bay did not disappoint, with Coors Light on hand, the Elvis White band on stage, Moko Jumbies working the crowd, and a runway fashion show. The event ends when the prizes are awarded. The top prize of $8,000 this year went to Dion Crabbe from Tortola with a hand of four of a kind. The second place prize was $5,000, and third place was $3,000. 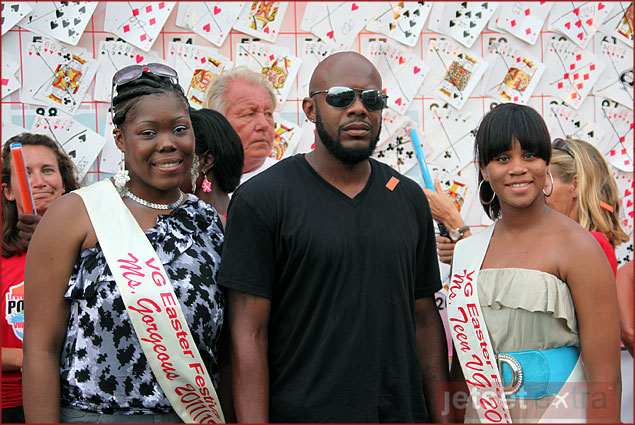 2011 saw boats from Puerto Rico, St. Martin, two from Miami, and 90 boats participating from the BVI. In the same spirit of community that prompted Nick and Monica to begin the event 10 years ago, it is still very much a local event that gives back more to the community than money. This year a donation of $10,000 was made to the Virgin Gorda Charitable Trust, tasked with building a 25m swimming pool at the Bregado Flax School in Virgin Gorda. In the past 10 years, the event has raised $70,000 for the Charitable Trust.

The people make the event, with over 2,000 in attendance on 120 boats and on the dock at Leverick Bay after the race. “It is about the people, it is about giving back through the charity. The real pleasure is being able to donate such a large amount of money to such a just cause here in Virgin Gorda,” Nick said, when asked what drives the Poker Run. 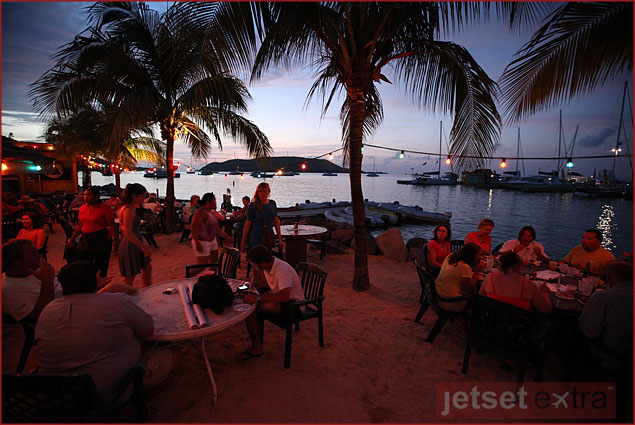 In 2009, nine friends and I took the day off work, chartered a boat aptly named “Time Off,” and took to the course on a Sunday morning. Not the fastest boat by any means, we set out for Trellis to collect our first card. Blasting out of the cut between Virgin Gorda and Moskito Island, it’s an impressive view as you scream down the channel with (in our case) a majority of the boats ahead of you, bouncing in their wakes.

The team was excited to reach the first stop, grab a card and a quick drink and head to the next. We hit the Jolly Roger a little less determined to make it a fast departure, and on the third stop at Norman Island, with the Willy T a little too alluring, the dynamic slowed from stop watch to sundial. We were reminded by the group of boats rafting up and turning up their stereos that while this is a boat race of sorts, it is the BVI after all. 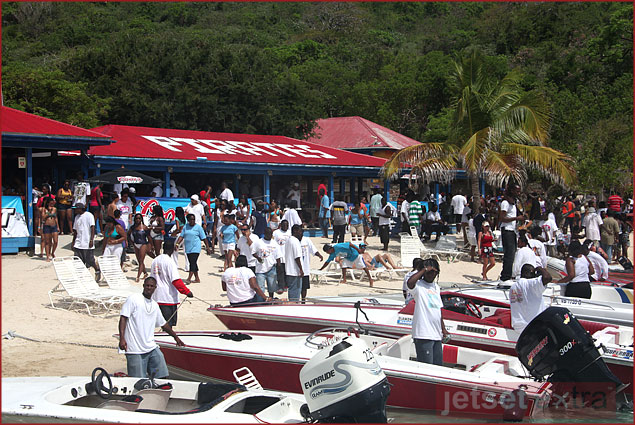 Rounding in to Virgin Gorda after a leisurely three-hour beach-side buffet at Pirate’s Bight (where we completely forgot to grab a card), we headed home and rejoined the fleet at Leverick Bay for an unforgettable after-party. We swapped stories with other participants, had a cold drink and watched Nick command the stage and award the prizes while swimsuit models strutted around the podium. It was a very fitting end to the tournament. Although on the clock for Coors Light this weekend, I was happy to see a lot of new and some familiar faces out on the water forming their own “Team Time Off.” 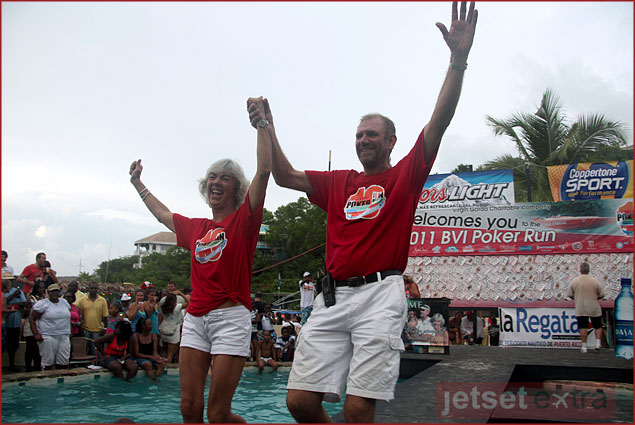 While the event continues to grow, the spirit remains the same. It’s accessible in some way to nearly everyone. If you haven’t collected your cards at Poker Run, pick up a hand in 2012 – you won’t be disappointed.