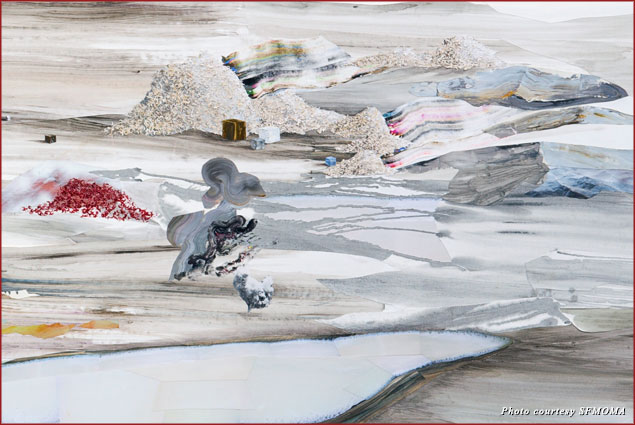 The new exhibition at the San Francisco Museum of Modern Art Fifty Years of Bay Area Art: The SECA Awards unfolds in the full-of-light fifth-floor galleries, bringing to the viewers’ attention a diverse and exciting group of contemporary artists with strong local ties.

Founded in 1961, SECA (Society for the Encouragement of Contemporary Art) established its Art Awards in 1967 to recognize the artists of exceptional talent working in the San Francisco Bay Area who were not widely known to the collectors and the public.

Over the course of 50 years, the biennial SECA awards were given to more than 150 outstanding artists and helped the museum bring the most interesting new art into the permanent collection.

The current show extends beyond the gallery and into the walkway to the SFMOMA rooftop garden. The wall of the walkway facing the San Francisco downtown view is occupied by a museum-commissioned mural created by 2004 SECA award recipient Rosana Castrillo Díaz.

Upon entering the galleries, viewers are immediately attracted to a narrow horizontal painting by 2006 award winner Leslie Shows: Heap of Elements for a Body, About to Act or Finished Acting. 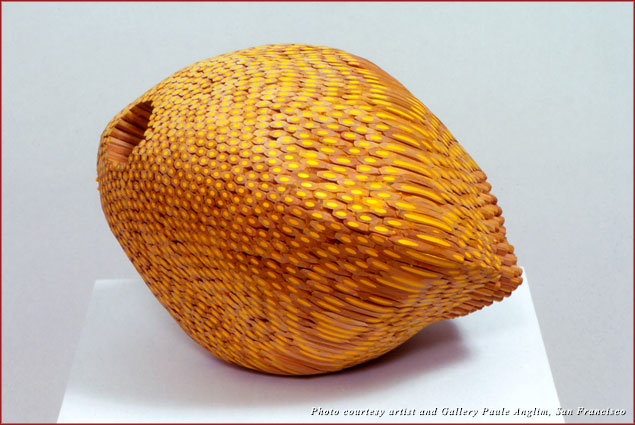 The central piece in the next gallery is a ceramic-looking and rather architectural structure of a pencil-and-glue sculpture by 1998 awardee Gay Outlaw, Nest.

There are dozens of highly original works by the SECA-selected artists in every gallery, and of course, the latest winners of 2010 SECA Art Award get a comprehensive representation in their own section of the show.

For the 2010 SECA award, the museum considered more than 250 artists nominated by Bay Area art professionals. Thirty finalists’ studios were visited by the museum curators and members of the Society, and the four winners selected for the award were Mauricio Ancalmo, Colter Jacobsen, Ruth Laskey, and Kamau Amu Patton.

Mauricio Ancalmo uses found machinery, like a film projector suspended on a wire, and an adjacent turntable to convey a mutely filmed dialogue between two anonymous lovers pushing and pulling at each other just like their mechanical counterparts.

Colter Jacobsen’s memory drawings, created after found photographs on found paper, record sleeves, and book covers, explore the many mysterious ways the human mind captures and recalls the visual world around it.

Ruth Laskey engages in a labor-intense process of hand-loom weaving to incorporate the slightest shades of color into her twill “watercolors” of geometric forms in various degrees of interaction, outlined solely by precisely positioned thread. 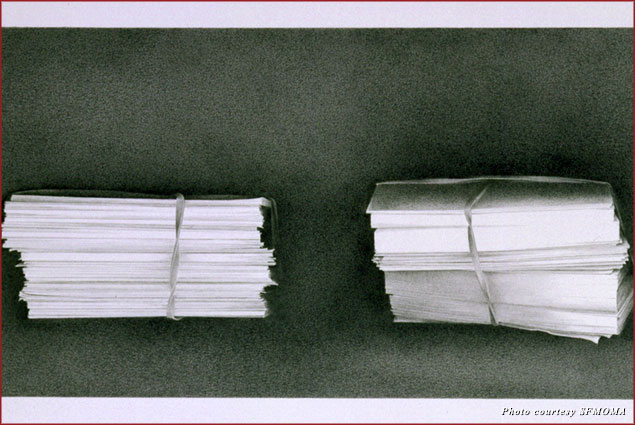 The Wild Bride at Berkeley Rep Christmas Centerpieces of Breaded Ham From A. G. Ferrari and Smoked Goose From Schiltz