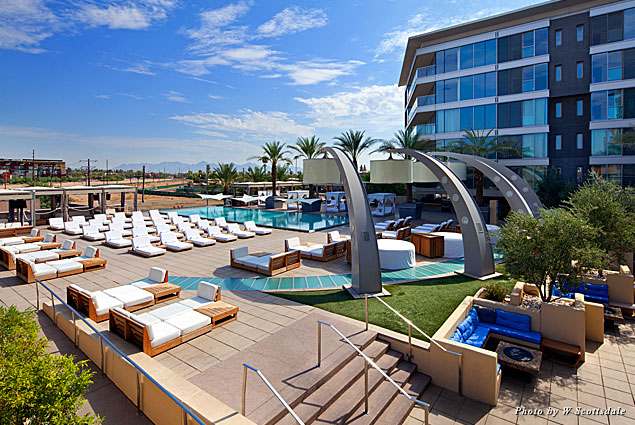 As the rain moved in to Seattle in September, I began thinking ahead to a sunny winter escape. I recruited three friends—Lusan from Los Angeles, Alexandra from Seattle, and Karin from Washington, DC—for a girls’ getaway to Scottsdale in early December.

When it came time to choose the hotel, I wanted luxurious yet contemporary, a restaurant fit for a group of foodies, upscale nightlife, and, of course, a spa. I suspected the W Scottsdale Hotel might embody everything I had in mind.

Suspicion was confirmed when I walked in the W Scottsdale several weeks later. It was close to midnight on a Thursday, and the party was in full swing. Groups of well dressed 30 and 40-somethings gathered in the bar located just off the W’s main lobby. A DJ was spinning Michael Jackson’s “Pretty Young Thing.” Yes, this was exactly what I had in mind. 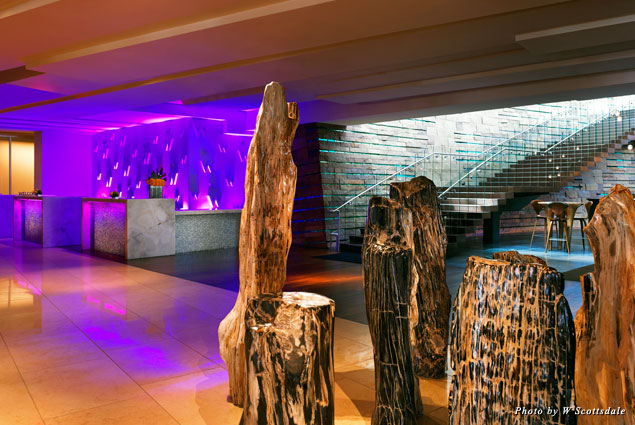 I had arrived one night in advance of the ladies, so after checking in at the reception desk, I headed upstairs to get unpacked. Four brightly colored cake pops (one for each of us) and a bottle of champagne greeted me when I entered the suite. 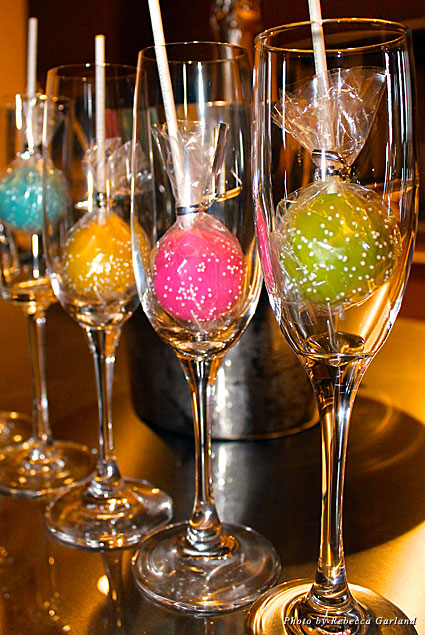 In keeping with the rest of the W Scottsdale, the aptly named “WOW Suite” featured a modern design with its clean lines, dark mahogany woods, chrome accents, and a mixture of a blue color palette and earth tones. The 1,500-square-foot suite included two bedrooms and two full and one half bathrooms. The bedroom I chose displayed one Robin egg blue accent wall, a nice contrast to the king-size bed’s white faux leather headboard and white furniture. 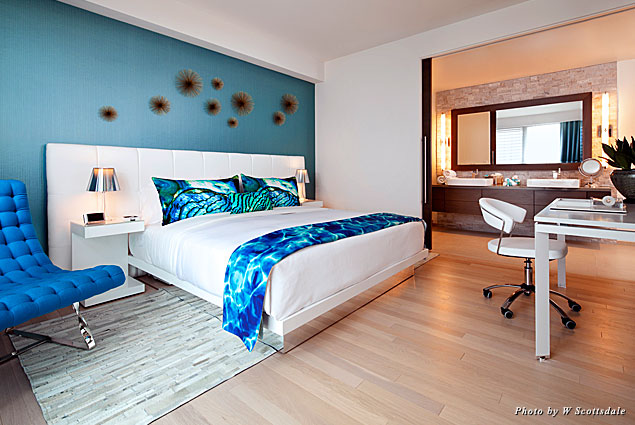 Walk-in closets in both bedrooms were as large as some entire hotel rooms I’ve seen in New York City. Located just off the bedrooms, the full bathrooms offered an array of Bliss Spa bath products, spa robes, and slippers. The glass-enclosed, glass-tiled shower in my bathroom had both wall and ceiling-mounted showerheads. 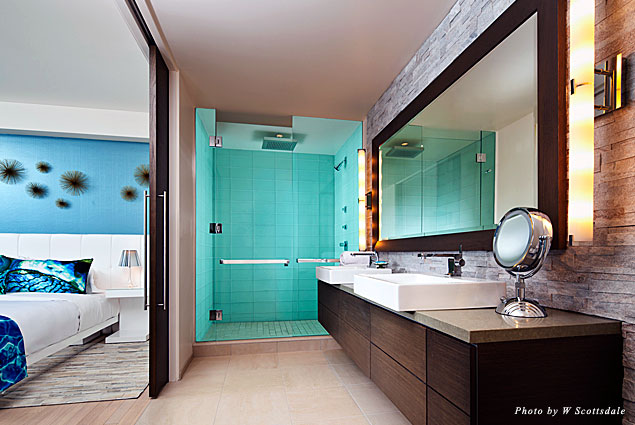 Beyond the bedrooms and bathrooms, the suite also included a full kitchen equipped with a Sub-Zero refrigerator, Wolf gas cooktop, oven, microwave, and dishwasher as well as a dining room and living room. The suite had three televisions, an iPod docking station, a large balcony, floor-to-ceiling windows, and even a washer and dryer in case you were contemplating moving in permanently. 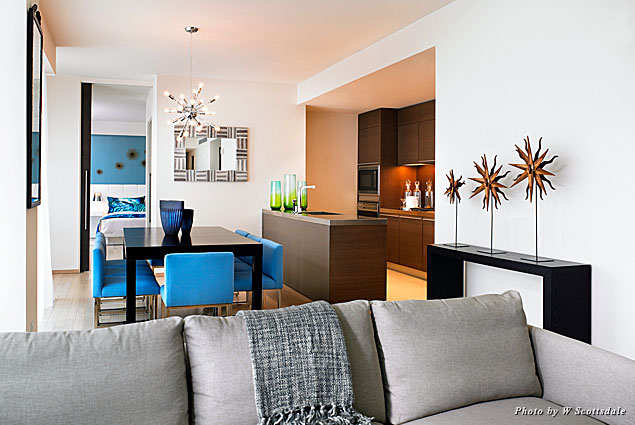 I somehow managed to resist sensory overload and fell asleep, awaiting my friends’ arrival the next day.

Lusan was the first to arrive. After getting settled in the suite, we headed downstairs to the W’s Living Room lounge for cocktails. It was mid-day (it’s five o’clock somewhere, right?), and the space with its couches, pillows, and chaise lounges had a considerably more laidback feel than the night before. I can’t resist a tequila cocktail, so I ordered the Rosy Hibiscus—house-infused Espolón Tequila, Patrón Citrónge, HUM liqueur, agave nectar, and lime juice. Lusan and I chatted, ate appetizers, and drank until Alex and Karin arrived. And then we chatted, ate, and drank some more before it was time to get ready for dinner. 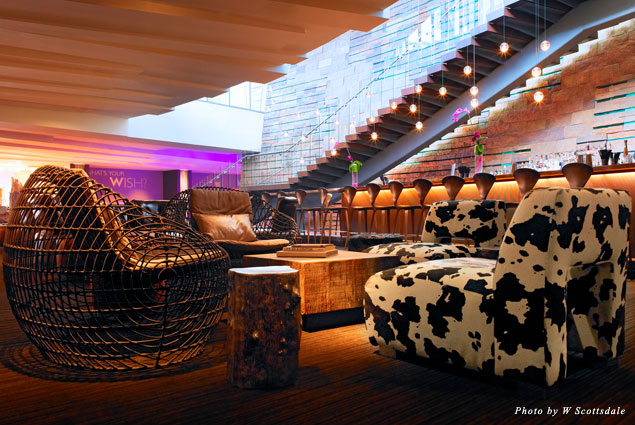 The W’s valet had several cars waiting to take guests out for the evening, so we took advantage of the waiting car service by catching a ride to Virtù Honest Craft restaurant. Virtù resides in a bed and breakfast in Old Town Scottsdale and greets guests with a charming patio courtyard entrance to the restaurant. Our table wasn’t ready, so we sat on the patio, which was beautifully lit by candles and lights strung above the outdoor tables. It made me long to visit in the summer when I could linger outside over dinner and drinks. 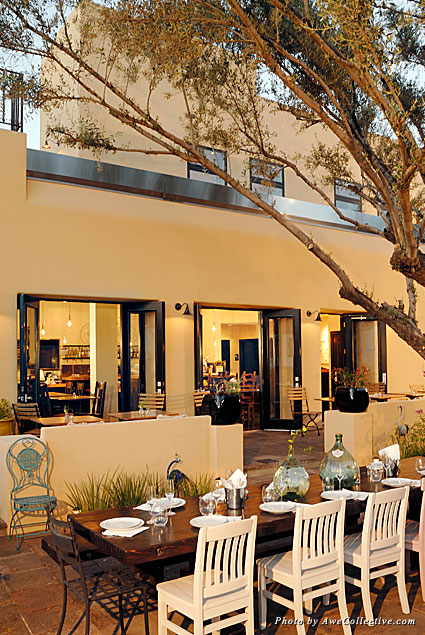 After a short wait, the hostess summoned us inside, where we were seated at a corner table providing us the ideal vantage point of the exposed kitchen. Every table in the 25-seat eatery was full, creating a lively atmosphere. We joined in the party with a round of drinks. I ordered the Nuova Bellezza—Alexander Grappa, St. Germain, Cabernet syrup, lime juice, and red grapes—and we toasted to our first night in Scottsdale. 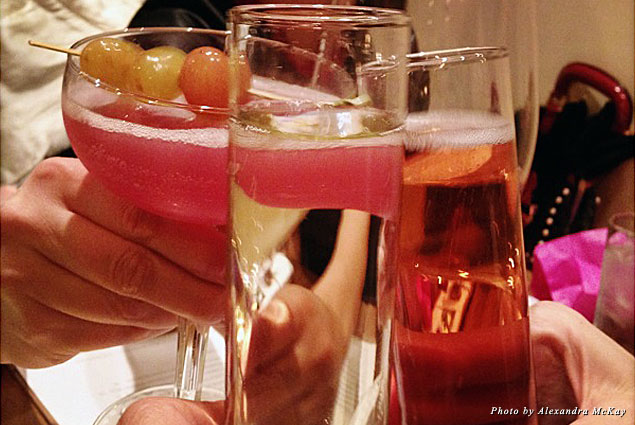 Upon my first bite of food (a grilled octopus with fennel, arugula, lemon chickpeas, and calabrese chili butter), I knew why Esquire magazine had included Virtù on its 2013 Best New Restaurants in America list. The octopus was melt-in-your-mouth tender with a perfectly smoky, charred exterior. We shared our entrées with each other and then shared some wine before calling the driver to return us to the W.

The next morning, we grabbed a quick breakfast at the W’s Sushi Roku (normal breakfast fare—not breakfast sushi!). We then hopped in our rental car and joined our friend and fitness guru, Kiya Knight, at Jabz Boxing in Scottsdale. Jabz is an all women’s boxing studio; think pink boxing gloves worn by fierce women beating up on punching bags.

We took an “Extreme Jabz Circuit” class. Kiya led the class through a series of circuit training both in and outside the boxing ring, including jabs, kicks, and uppercuts to boxing bags as well as more traditional circuit training such as burpees and squats.

After the workout, Kiya met us at the W’s Bliss Spa where we each underwent a variety of spa treatments such as the Lime and Ginger Salt Glow (60 minute body scrub), Reflexology (30 minute foot massage), and Peeling Groovy (30 minute exfoliating facial). My massage therapist, Brandon, began my Blissage 75 massage with a warm paraffin wax foot wrap followed by a full-body massage that relaxed me to the point of having to peel myself off the table once the 75-minute treatment came to an end.

After “blissing out” at the spa, we retreated to the suite to chat for a few hours before getting ready to go out for the evening. The five of us took a car from the W to Posh Restaurant. Posh offers what they term “improvisational cuisine.” Upon sitting down, we were each presented with a menu and a pencil.

The menu gave us several options to choose from for the number of courses and wine pairings—anywhere from five to seven courses or a full tasting menu. After determining how many courses (we all went with five), our next decision was to each decide whether to upgrade with supplements such as foie gras, a cheese plate, or caviar. Next, we were asked to strike through items we dislike. After deciding food temperatures and informing the chef whether we had any allergies or dislikes, we handed our menus back to our server, Corissa, to allow the chef to begin crafting our meals based upon our individual preferences. Improv, indeed.

Starting with the first course, we realized how vastly different each of our meals would be. Corissa brought us Tuscan vegetable soup, fingerling potato salad, turnip soup with herb emulsion, and beet salad, spread around the table tailored to each of our likes and dislikes. The best dish I had at Posh was foie gras three ways, consisting of a foie gras torchon with a berry coulis, seared foie gras with Sultana raisins and … wait for it … foie gras lemongrass sorbet. The foie gras sorbet was not only my best dish at Posh, it easily made my top 10 best dishes ever eaten. And when the foie gras was paired with a glass of Sauturnes, Posh completely won me over.

After dinner, we headed back to the W, where the Living Room was packed with guests drinking cocktails and listening to live music. We headed upstairs to check out the rest of the W’s nightlife. The second floor opens directly into the W Scottsdale’s Shade Lounge and Bar, which was equally as lively as the downstairs Living Room.

We walked just beyond Shade onto the W’s WET deck, which transforms from pool deck during the day to DJ-spinning lounge at night. Despite the unseasonably cool December temperatures, we were warm on the deck sitting under outdoor heaters and in front of a fire pit.

For the month of December, the W had transformed its poolside Sunset Lawn into “CHILL,” a 1,500 square foot ice skating rink.  I loved the novelty of being able to ice skate on a hotel roof in Arizona in winter and wanted to take a spin on the rink.  But after wine pairings with dinner, we made the wise choice not to strap on ice skates, but instead to head down to the Living Room for a cocktail.

On Sunday morning, we met Kiya at the base of Camelback Mountain’s Cholla Trail for a hike. Being just a few weeks before Christmas, our hard work was rewarded with a decorated Christmas tree and Santa Claus posing for pictures at the top of the trail.

Between boxing on Saturday and hiking on Sunday, we were ready for a lazy afternoon.  We spent the day ordering room service for lunch and hanging out in the suite until it was time to get ready for the evening.

Dinner that night was downstairs at Sushi Roku. We got settled in our half-moon shaped booth and promptly ordered a bottle of sake. When it came to food, instead of ordering off the menu, we ordered omakase style, placing our meal in the hands of the head sushi chef, Miles.

Our server, Max, was impressive with his vast knowledge of sushi and the appropriate sake pairings. Max also kept us entertained. Once he told us he was a student at Arizona State University, we somehow discovered he had recently written and performed a “slam” poem as part of a class assignment. After a great deal of begging, Max gave us an impressive tableside slam poetry performance. Dinner and a show!

After a brief respite from food, Max persuaded us to try dessert, so we shared crème brûlée topped with blackberries and a chocolate lava cake topped with powdered sugar with a side of vanilla ice cream, resting on a plate of chocolate and raspberry syrup. We then retired to the W’s Living Room for one last cocktail before bed.

On our last morning in Scottsdale, we said our reluctant goodbyes as Lusan, Alex, and Karin headed back to the airport in Phoenix. I had a late afternoon flight, so I took the opportunity for a workout in the W’s gym. I split my time on the elliptical watching the personal TV and staring out the wall of windows at the WET deck just outside the gym.

After the workout, I made a beeline for the deck to soak up a sunny albeit chilly December day. As I sat by the pool saying my own reluctant goodbye to the W Scottsdale, it struck me that visiting in the summer would be an entirely different experience. Cabanas and cocktails by the pool … sounds like another perfect girls trip.  Round two, anyone?

Scottsdale’s Gone Seersucker, From Polo to Dining Scottsdale: Where the Desert Blooms