Getting Naked in Baden-Baden 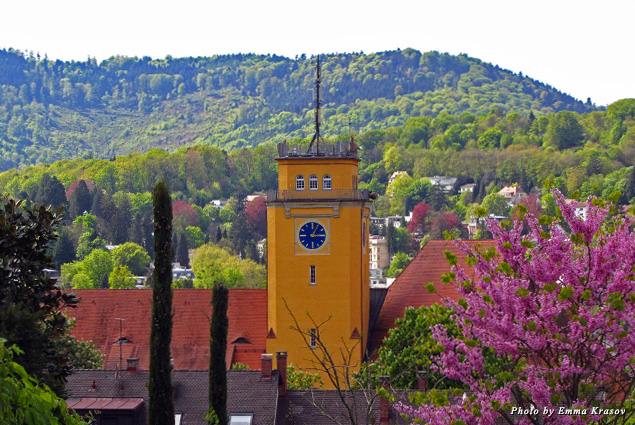 Many Germans like to joke, “Baden-Baden is so good it has to be repeated twice.” In reality, the double name of the world-famous mineral springs resort is a remnant of its historical past. The city of Baden used to be the capital of the land Baden, hence its double name. In the time period following World War II, when some of the German lands were merging into larger administrative regions, Stuttgart became the capital of the land Baden-Württemberg, but the glory of Baden-Baden hasn’t diminished one bit. 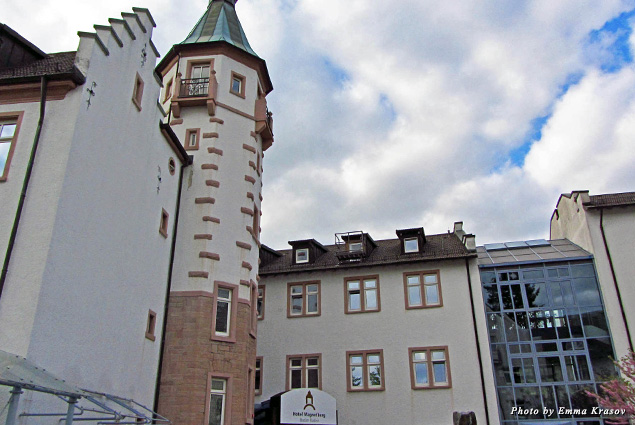 After a short flight with Germanwings—an affordable European air carrier—and an even shorter ride on the Deutsche Bahn train, I was contemplating the beautiful Baden-Baden, all green and awash in sunlight, from my cozy room at Hotel Magnetberg on a hilltop.

A walking tour of the city revealed some fascinating details about its rich history. Inside the neoclassical Kurhaus there is the Baden-Baden Casino, lavishly decorated in Belle Époque style. Marlena Dietrich called it the most beautiful casino in the world and famously added, “I would know, I’ve gambled in all of them.” 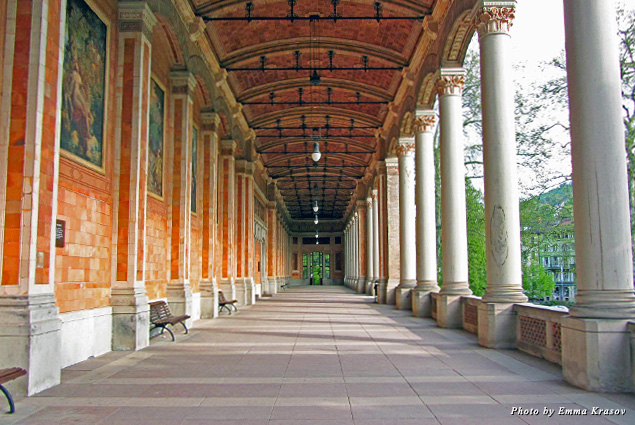 A few steps from the Kurhaus there is a neoclassical colonnade of the 1842 Trinkhalle (drinking hall) decorated with well-preserved murals depicting romantic scenes from old folk tales and legends of the region. More than 150 years ago, the resort visitors were “taking the waters” here by walking from one drinking fountain to another, sipping the healthful mineral water delivered from the 12 springs of Baden-Baden. Back in the day, while strolling through the Trinkhalle, one could’ve met Russian writers Nikolai Gogol (1809-1852), Ivan Turgenev (1818-1883), Fyodor Dostoyevsky (1821-1881), countless European royals and nobles, and various other celebrities. By the end of the 19th century, when taking of the waters had switched from drinking to bathing, the resort became even more popular as a must-go summer destination for the rich and famous. 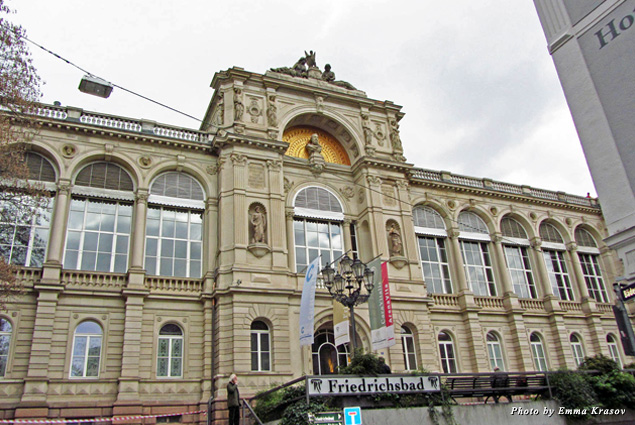 The oldest Baden-Baden spa, Friedrichsbad, is located in an 1877 “temple of wellbeing.” Hot showers, cold baths, steam rooms, saunas, warm and hot air baths, and even a vigorous brush and soap massage are included in a three-hour program divided between 17 stations, each with various degrees of heat and a recommended amount of time to be spent there.

A color brochure of the spa depicts awe-inspiring images of stained glass windows, painted tiles, arched doorways, and a glass dome lined with graceful caryatides overlooking a gigantic round pool underneath.

Anticipating my visit to the historical spa, I perused the brochure, not paying much attention to its “traditionally garment free” statement. I imagined something akin to women’s shower facilities in an American spa, distinctly separated from the men’s area, but I was in for a surprise!

Upon arrival at the facility, I quickly discovered there was only one co-ed locker room and the entire bathing temple was in fact unisex. Naked people of any age and gender were walking around rather nonchalantly.

Wrapped in a large bath towel, I proceeded to the showers. The gushing showerheads were out there in the open, without any dividers between them. By the towel shelf there was a little holder where visitors could store their eyeglasses so they wouldn’t be damaged by the heat and humidity of the spa.

I experienced a feeling of profound relief the moment I took off my glasses. Thanks to my writing-induced near-sightedness, without my glasses I was as blind as a bat. All the naked people around me turned into blurry silhouettes; their faces became indiscernible, and their eyes couldn’t be seen at all.

I felt my own face relaxing and changing from anxious to serenely indifferent. When a female masseuse with a soapy brush tore the towel off my hands and tossed it into a bin, I realized I would encounter the next towel only at the end of my spa treatments, but it didn’t dampen my mood.

The healing waters of Baden-Baden did their magic. Leaving the Friedrichsbad I felt like a new woman. My jet lag fatigue was gone, and I continued to explore the beautiful town on foot with a spring in my step. 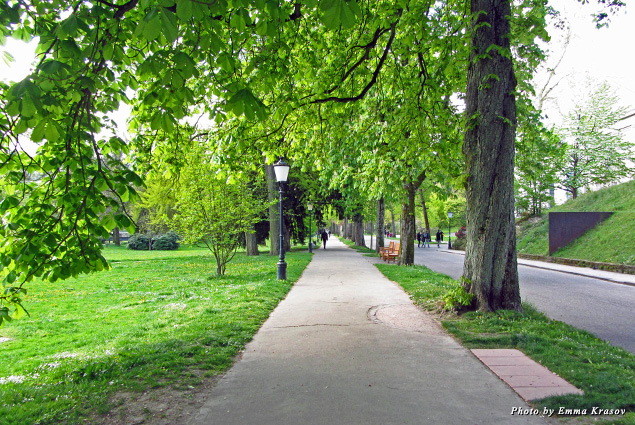 I walked along the emerald-green Lichtentaler Allee, the 350-year-old park along the Oos River; visited the Frieder Burda Museum, where Max Beckmann’s paintings created in Baden-Baden from 1928 to 1936 are displayed among other modern and contemporary artwork; and had a nice early dinner at new and very popular restaurant Rizzi, which serves fresh local cuisine.

From there, I walked to the world-renowned Casino Baden-Baden, the oldest and largest in Germany, designed in the style of French palaces and developed by the visionary impresario Edouard Benazet and his son Jacques in the 19th century. 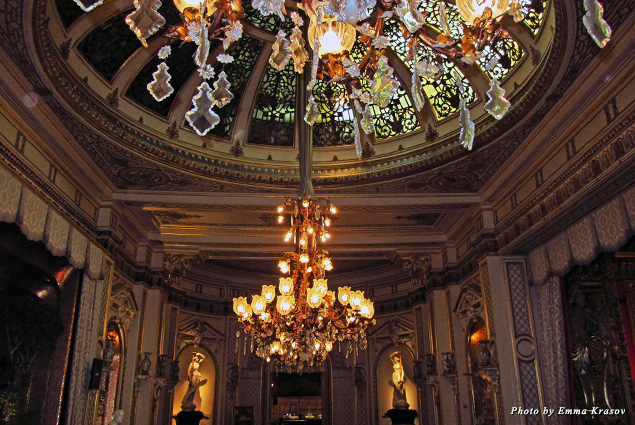 In the gilded halls of the casino, decorated with classical sculptures, period furniture, crystal chandeliers, and red velvet draperies, Fyodor Dostoyevsky once famously lost his last shirt to gambling, after which he created his masterpiece novel, “The Gambler.” Although I was sure it was totally worth it, I realized the evening gown I was wearing in compliance with the casino rules wouldn’t constitute any value, unlike Dostoyevsky’s shirt, so I resorted to gambling away my 20 euros at the historical roulette tables and left close to midnight, feeling extremely satisfied with my visit. 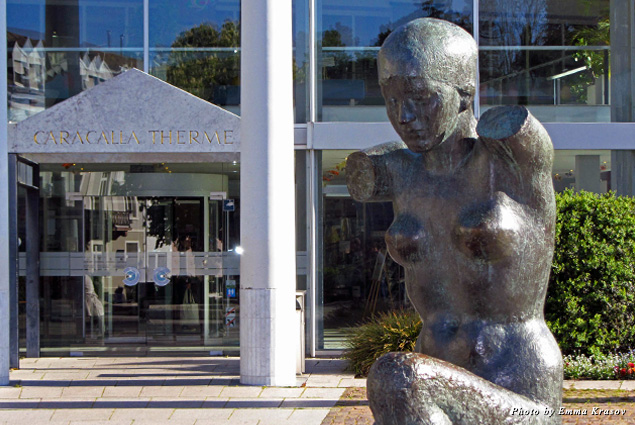 The next morning, I took the waters again, this time at the contemporary, glass-walled Caracalla Spa, opened in 1985, where everyone was wearing a swimsuit—at least in the first floor area. A giant indoor-outdoor pool with thermal water close to body temperature features a spectacular water dome, multiple waterfalls, whirlpools, massage jets, and flow channels. It is surrounded by hot and cold-water grottos, scented saunas and steam rooms, brine inhalation rooms, and long chairs under tanning lamps.

On the second floor, where clothing is not permitted, there is an entire sauna complex with Roman mosaics and pillars evocative of the bathing culture in the time of Emperor Caracalla. One can spend hours here, wandering from Meditation Sauna to Aroma Sauna, and from Blue Space Sensory Room to Green Relaxation Room and Solarium. 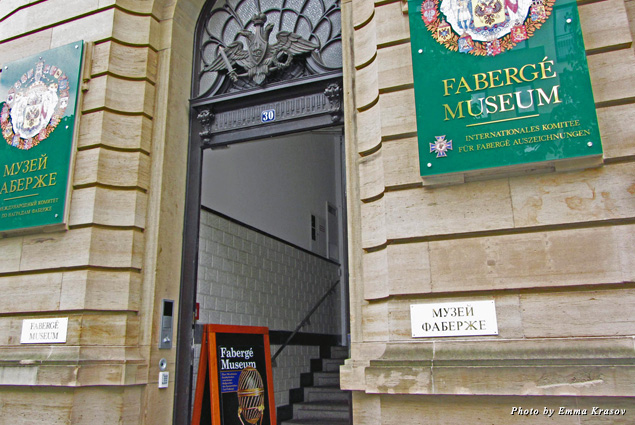 Before leaving the magical Baden-Baden I paid a visit to the Fabergé Museum, the first in the world dedicated to the exquisite jeweler Carl Fabergé and featuring more than 700 pieces created by his firm. Russian imperial Easter eggs, fine jewelry pieces, everyday objects, and animal statuettes made with semi-precious stones, as well as copper and brass articles, are presented here in an intimate setting of one of the historical buildings along the tree-lined Sophienstrasse in the city center.