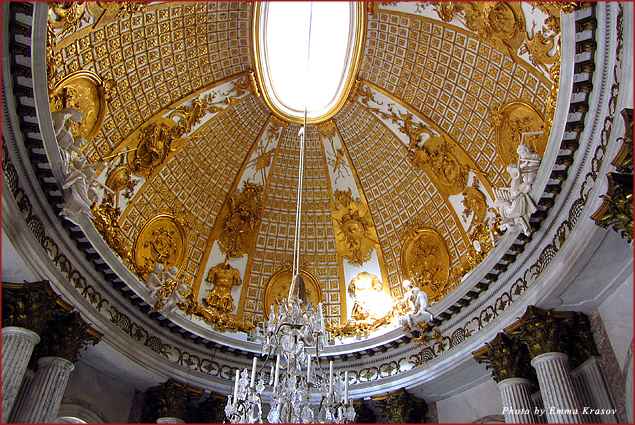 The land of dense forests and flowering meadows, rolling hills and blue lakes formerly known as East Germany was part of Prussia, then part of the Communist Bloc, and is now waiting to be re-discovered by the traveling masses.

My visit started at Potsdam – the summer residence of the Prussian kings which boasts several UNESCO World Heritage sites.

The most important one is Sanssouci (“carefree”) palace and park, built by Frederick II (1712-1786), also known as Frederick the Great. He disliked officious Berlin, and preferred to spend his days among the Roman statues and wild grape terraces of his private Versailles.

Frederick II was a study in contrasts. He was a European ruler of the Enlightenment who supported religious tolerance, banned torture, and barred his court from interfering with the justice system, but was a lawless politician, invaded neighboring countries and changed their borders.

He hated the court, but built gorgeous palaces, despised his “soldier-king” father, but strived to achieve military glory, and was a patron of the arts, but a known misogynist. To decorate his palaces, he chose antique themes depicting women as depraved and treacherous creatures or men’s toys. 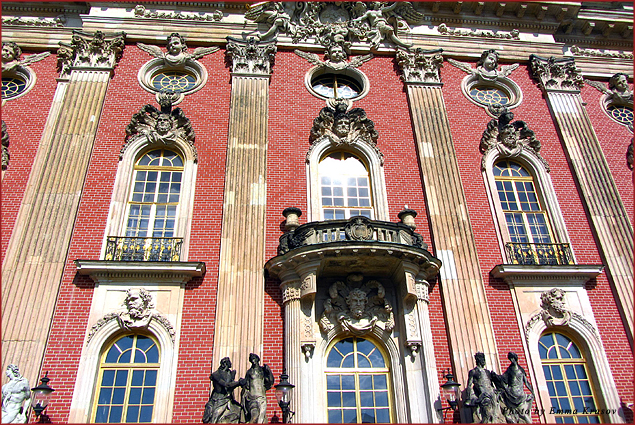 In a Pygmalion painting by the court artist Antoine Pesne, a figure of Galatea was drawn after a famous ballerina La Barbarina, who had narrow boyish hips, and therefore was considered beautiful by the king.

His enormous New Palace, with 400 exterior statues and 20,000 precious and semi-precious stones in the interior décor, was built to commemorate his victory in the Seven Years’ War (1756-1763), which established Prussia as a powerful European state.

For this monument to himself, Frederick chose an opulent baroque style which was going out of fashion with the advance of neoclassicism but still symbolized power and inspired awe. 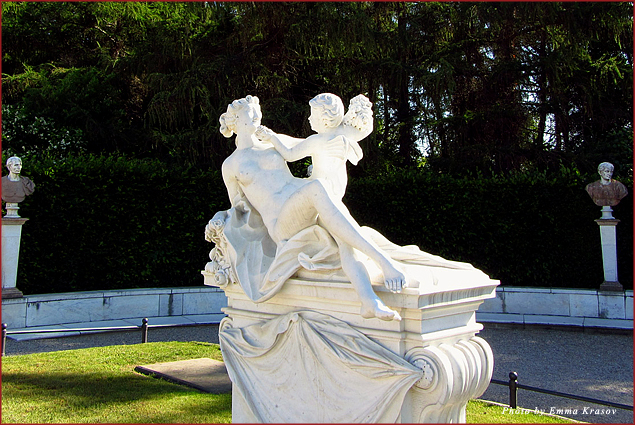 Frederick’s grave near the Sanssouci Palace is steps away from Sun Pavilion, which holds a bronze statue of a young man from Rhodes. During Frederick’s rule, this statue was thought to be an image of Antinous – a deified lover of Roman Emperor Hadrian, and a “rainbow flag” of the time. According to his will, Frederick the Great was buried next to his Italian greyhounds under a Roman statue of the goddess Flora playing with baby Zephyr.

After a tour of Sanssouci, I spent the night at the Steigenberger Hotel Sanssouci reading about Prussia and the house of Hohenzollern. My jetlag and my firm and narrow “army” bed with only one skinny pillow kept me alert.

The next morning, a lavish breakfast with freshly-baked breads, rich salads, cold cuts, and many kinds of herring set me off for the day of further discoveries. 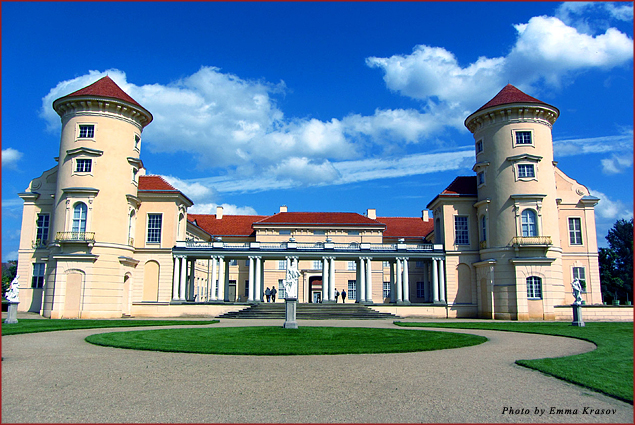 In Brandenburg, the white-walled medieval Rheinsberg Castle on Lake Grienerick is surrounded by a vast garden and used to be Frederick the Great’s refuge when he was a crown prince. Here, young Frederick created “the court of muses” and hosted actors, dancers, and painters, played the flute, and composed music in his happiest years.

Parks and swamps are teeming with wildlife – deer and rabbits, ducks, storks and eagles, fish and frogs. There are no crowds, just random nature enthusiasts with their bikes, golf clubs, canoes, and kayaks. 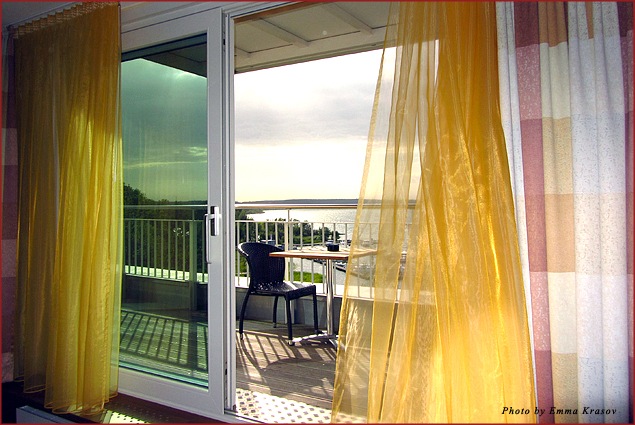 The brand-new Iberotel Fleesensee overlooks the lake and has a private beach and marina. Inside, it’s all modern conveniences, rooms decorated with a lake theme, and restaurants with great food. There is even a free personal trainer for the guests.

That night, I slept like a baby after a gourmet dinner at the hotel’s Lakeside Restaurant accompanied by crisp local wines.

Farther north, closer to the Baltic Sea, the capital city of Schwerin is famous for its fantastic castle situated on a small island in the middle of its namesake lake. 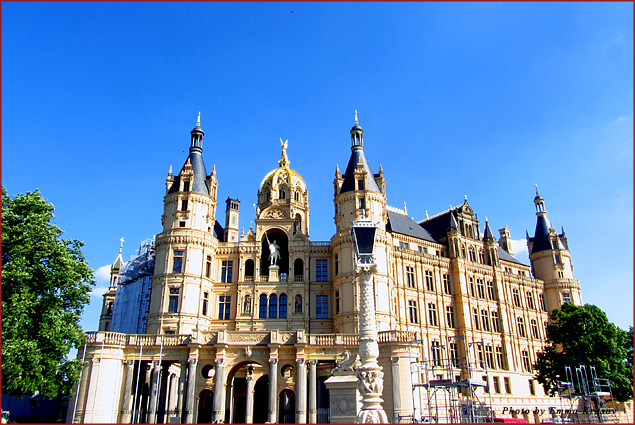 Built and rebuilt numerous times from a Slavic fortress in 973 to the five-wing Sleeping Beauty castle modeled on the Loire Valley Chateau de Chambord by the duke Friedrich Franz II in 1845-57, it is a magnificent structure surrounded by English landscaped gardens with statuary and flower beds.

Love is in the air in and around the Schwerin Castle. In some of its 653 rooms, there are “love chairs” which allow a couple to sit sideways face to face with each other for easy kissing; there is the Island of Love in Burggarten (a castle garden), and there are “love trees” there with their branches joined in a hug by clever grafting.

Schweriners love their harmonious city – one third water, one third gardens, and one third buildings. Most of them wouldn’t want to live anywhere else.

The resort town of Boltenhagen on the southernmost shore of the Baltic Sea is called a cradle of the German bathing culture and the Berliners’ bathtub. It has a beautiful promenade leading from the main drag to a long sandy beach. I couldn’t help but take off my sandals and wade through the cool calm water. A white swan crossed my path, and was just standing there, next to me, looking at the horizon. 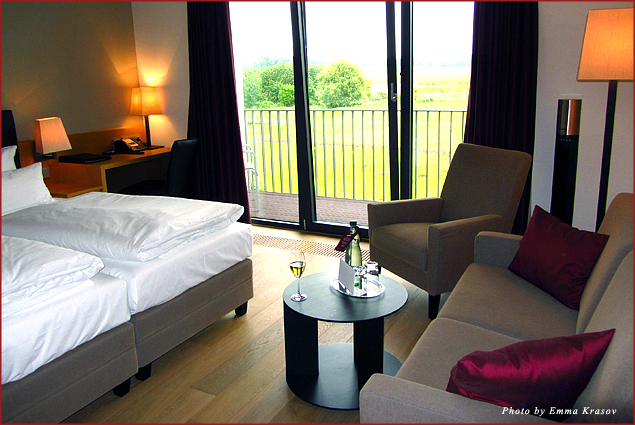 Staying at Schlossgut Gross Schwansee (“Swan Lake”) for the night seemed only natural, considering the swan theme of the day. There are 10 luxurious guest rooms and an upscale restaurant in the manor house, built in 1745. However, as much as I like historic buildings, after a day of intense discoveries I prefer to crash in a comfy contemporary environment.

The hotel’s new building provided simplicity, functionality, and a great room layout. Located on 900 hectares of serene fertile land, Schlossgut Gross Schwansee has its own agriculture and a lake with a swan house right outside the guest rooms’ balconies. In the morning, I watched two fat hares playing on a meadow by the lake in the first rays of dawn. 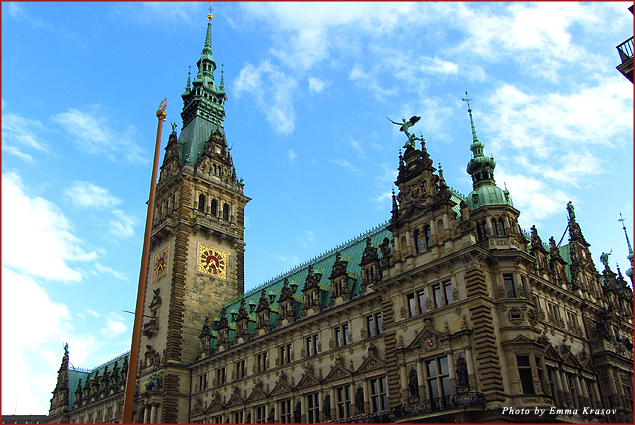 The last stop on my trip was Hamburg, where there are more bridges than in Venice and Amsterdam combined. Hamburgers (residents of the city, not the beef patties) are extremely proud of their independence and cosmopolitan appeal, but they have the most impressive town hall, Das Hamburger Rathaus (1897), which to me signifies their devotion to local government.

Behind the town hall building there is a fountain dedicated to the goddess Hygieia – a symbol of cleanliness, erected in 1892 during the cholera epidemics which claimed many thousands of lives. Since then, Hamburg went a long way toward improving the quality of life for its citizens. It is now one of the greenest cities in Europe – in more than one sense.