From Moscow With Love… 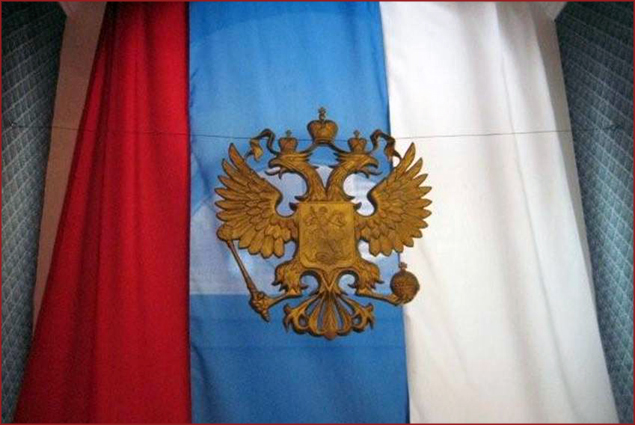 Hello once again…this time from Russia.

“Looming over the rest of Europe with its immense, inhuman size and dark, brutal history, Russia is an essential and fascinating destination, the flipside of modern Europe and still an unknown quantity to most travelers.

Somehow Russia manages to pull off the truly impressive feat of being both a really exciting place to travel while never relenting on its tediously bureaucratic approach to life. Stay in the European Union if you want things easy and hassle-free, but venture east for one of the last truly adventurous and unpredictable destinations on the continent.” 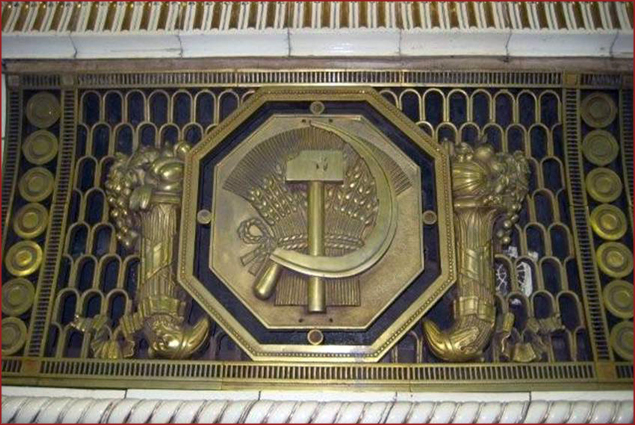 Russia is the largest country in the world. It spans 11 time zones. Russia’s area is like the USA and Europe put together. The capital of Russia is Moscow and the second-largest city is St. Petersburg (which is also called the “Northern capital”). Here’s St. Basil’s church in Red Square, the center of Moscow: 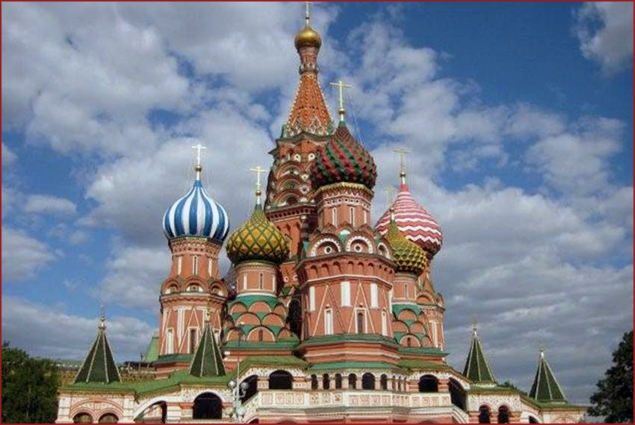 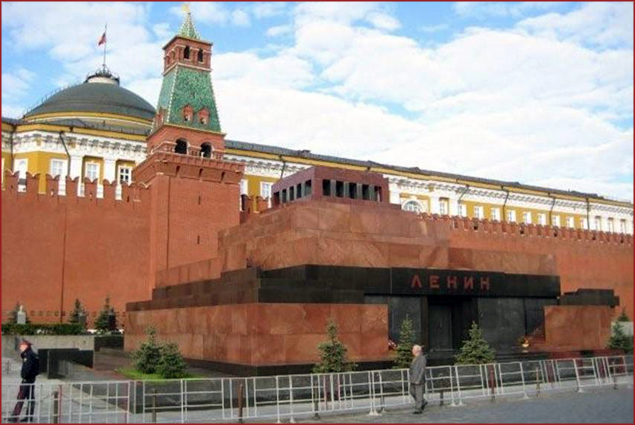 Visiting Lenin’s tomb is an eerie experience. You go down underground, under this large marble structure, into almost complete darkness. Every step of the way you are carefully watched by an armed soldier. When your eyes finally adjust, you gaze upon the embalmed figure of the former leader, resting peacefully, although he looked slightly mannequinesque to me. (If that’s even a word…) 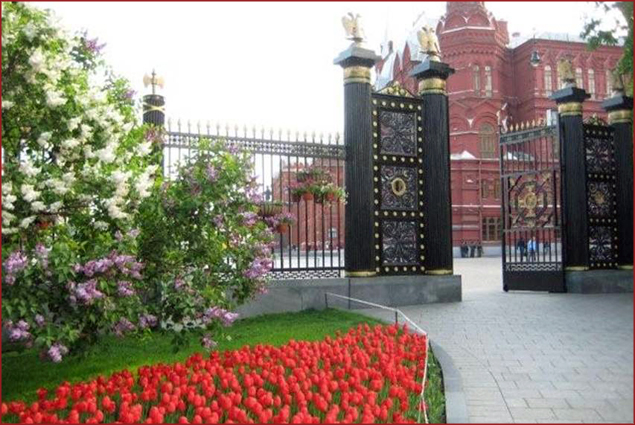 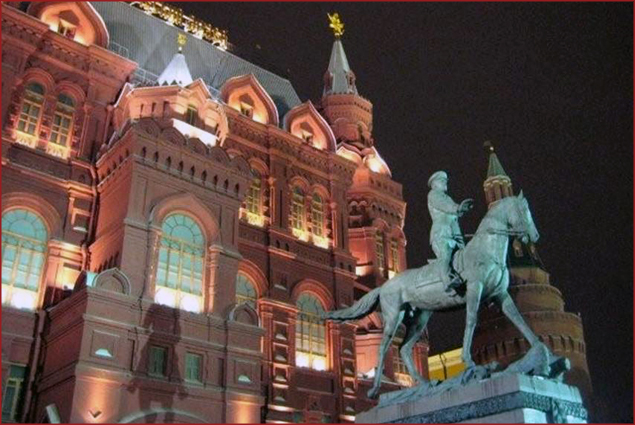 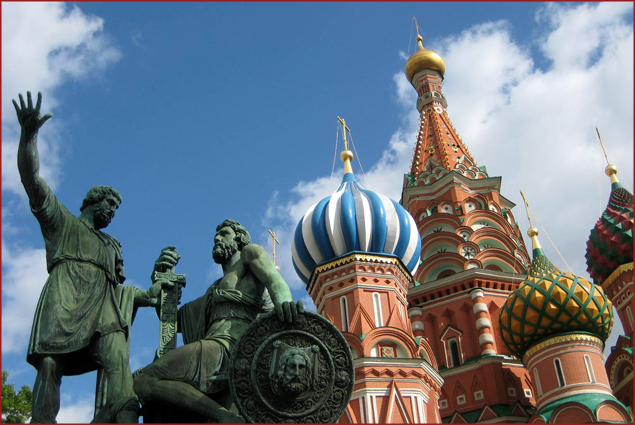 If you’re curious what it looks like inside, here’s a snap inside one of these towers: 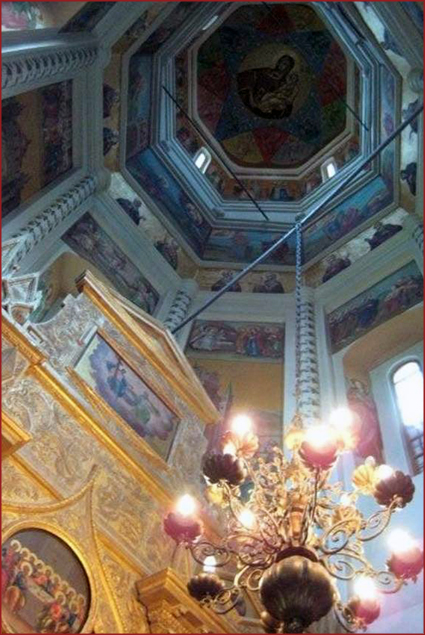 I’ve taught myself how to read the Russian alphabet. It’s really not that hard. See if you can read this sign: 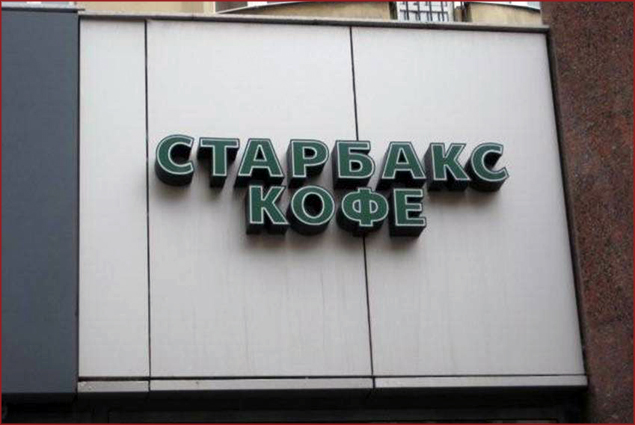 It reads, “Starbucks Coffee,” just like it sounds in English.

Curious about Russian food? Although they do have McDonalds, Subway, Pizza Hut, and other “American” food places, the more Russian foods include blini, caviar, borsch, kvas, etc… 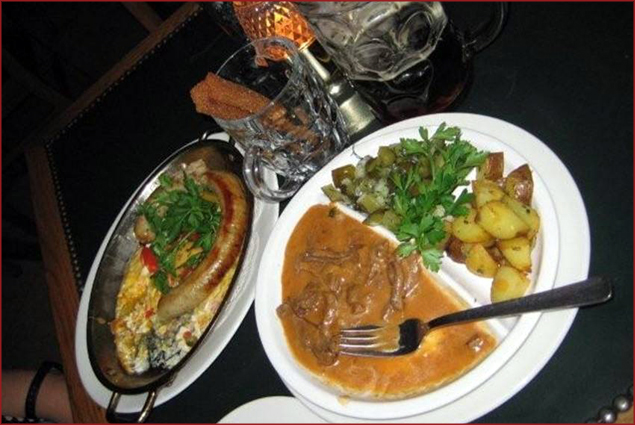 The picture above was taken from the City Scape Bar, atop a 360-degree view of the city ala Seattle’s Space Needle. Here is a view from up there, overlooking one of “The Seven Sisters,” a series of skyscrapers built in the Stalinist style during the dictator’s last years:

And my cheerful waitress:

The subway system in Moscow can be a little confusing for Westerners, but most stations are decorated with beautiful and elaborate art or sculpture:

Alas, I’ve now left Moscow behind, and have relocated to St. Petersburg, “The Venice of the North,” the most European of Russian cities. It is a city built upon canals, and is also known as Russia’s cultural center. I’m renting an apartment with a balcony right in the heart of the city overlooking a canal. Here I am enjoying a beverage on the street after viewing the The Nutcracker ballet at the nearby Mariinsky Theater:

As always, all are welcome to come visit me!