A to Zihuatanejo: Enjoy an Authentic Taste of Mexico 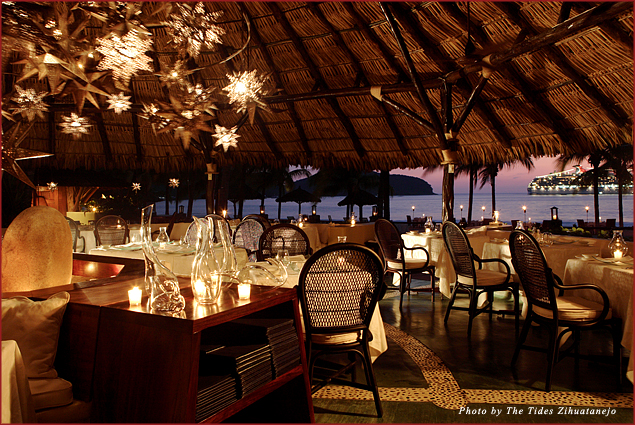 If you’d just spent nearly 20 years in prison for a crime that you didn’t commit, finally tunneling your way out, with dreams of finding a tropical paradise to spend the rest of your days, where would be your escape? If you’re Tim Robbins’ character in the movie Shawshank Redemption, it would be Zihuatanejo, Mexico. But let’s say you’re just needing a quick getaway of the not so much on-the-lam variety, but an escape nonetheless. Where would be yours?

No matter where you think it would be, it should be the same. Zihuatanejo. 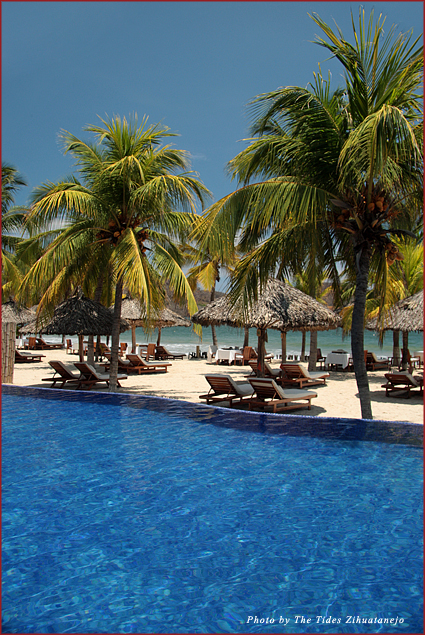 Forget all of your preconceived notions about vacationing in Mexico. Somewhere between the influx of spring breakers to Cabo and Cancun and cruise ship passengers to Acapulco and Puerto Vallarta, Zihuatanejo was pleasantly overlooked. Situated along the Pacific Ocean just a 40-minute flight southwest of Mexico City, this fishing village has struck the perfect balance – holding protectively to its Mexican roots while developing just enough to be a jetsetter destination. Once you get beyond the biggest hurdle – pronunciation, of course (Zee-watt-a-nay-ho), planning the vacation itself is easy. Despite its small stature, Zihuatanejo is home to several luxury hotels and resorts. But for prime beachfront location, excellent service, and the ability to offer large-property amenities with the feel of an intimate boutique hotel, there is only one logical choice: The Tides. 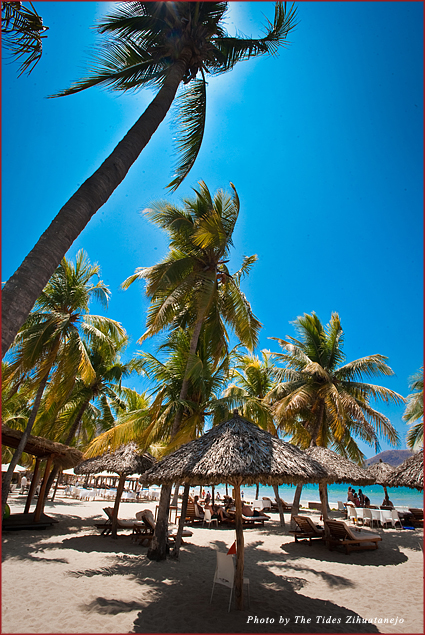 The Tides staff greets you on arrival with a cold towel scented with lavender, a glass of hibiscus and mango juice, and a tour of the property before guiding you to your room. The resort is spread among six garden-filled acres, which include three swimming pools, two tennis courts, a fitness center, spa, gift boutique, two restaurants, and three lounges.

And that’s all before you get to the best part – 600 feet of palm-tree-lined beachfront along Playa La Ropa.

The resort’s 35 rooms and 35 suites are housed in two-story adobe-inspired casitas. Guests enjoy in-room amenities such as flat-screen TVs, DVD players, robes, slippers, plush beach towels, iPod docking stations – and even iPods preloaded with music if you forgot yours at home. 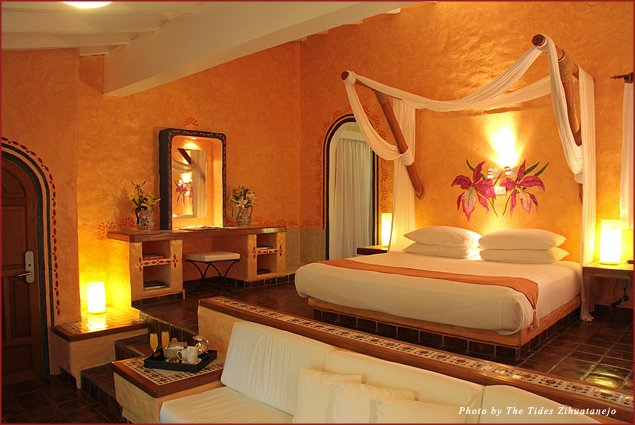 No two accommodations are alike, though all feature a private terrace or balcony as well as views of the garden or bay. Suites include private, outdoor infinity pools. 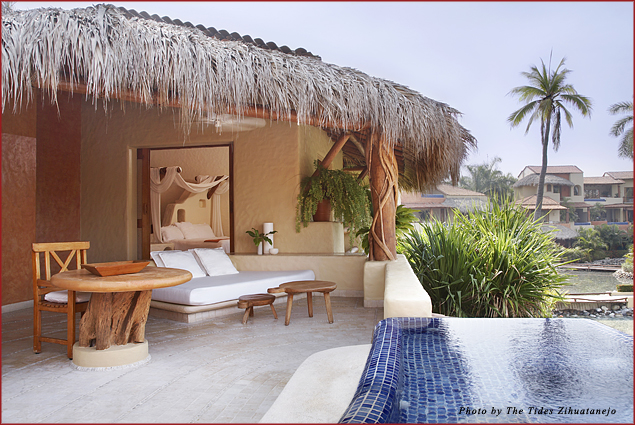 Once you get settled in, you realize that it is easy to be as active – or inactive – as you want to be. Watersports are not offered through The Tides per se, but in typical laid-back Zihuatanejo fashion, a member of the Tides’ staff will flag down Miguel, whose boat is moored in the water off Playa La Ropa. During the day, Miguel hangs out on the beach with his assortment of water toys for guests’ use – a sailboat, sea kayaks, boogie boards, longboards, and paddleboards. When business is slow, you’ll see him out on the water paddle-boarding or on the shore chatting with the locals. 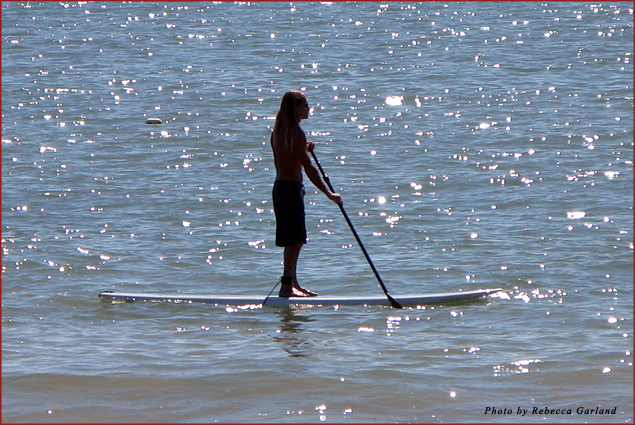 While it would be quite possible – and you could be quite content – to spend the entire vacation on The Tides’ property, don’t. Zihuatanejo is meant for exploring. There are numerous area activities, including swimming with dolphins, ziplining, hiking, diving, ecological tours, and golfing, all of which can be arranged by The Tides’ concierge, René. Or take matters into your own hands and approach one of the fishermen hanging out by their pastel-colored boats along Paseo del Pescador, Fisherman’s Walk. 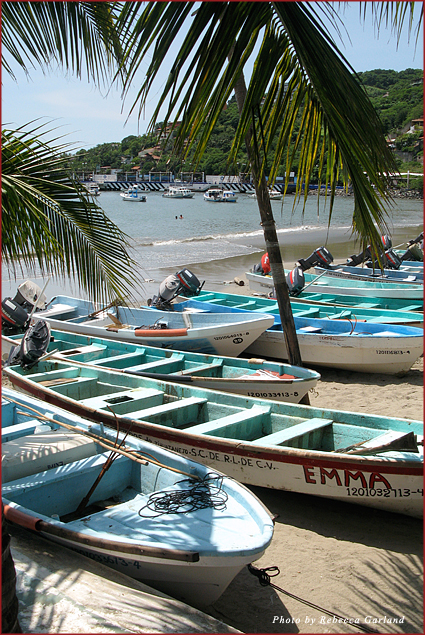 Ask around for charter captain Hector Olea, who takes tourists out for a day of fishing. After you’ve caught your lunch, you will spend time snorkeling at Playa Manzanillo while he cooks the fish for you on the beach. 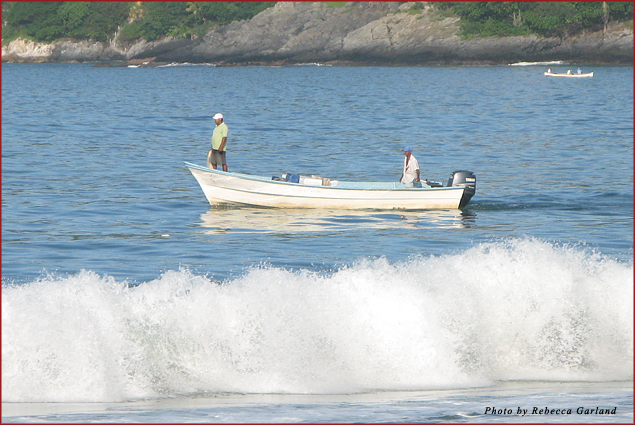 Back on dry land, Zihuatanejo is an easy town to explore with many shops and boutiques featuring the work of local artisans. 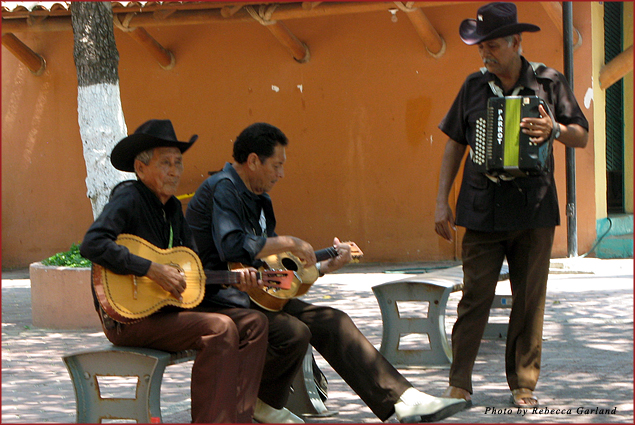 Don’t miss Mercado Central Municipal, the locals’ market, where you may be the only tourist but will get an authentic feel for local culture while browsing the fresh seafood, fruits and vegetables and other staples of daily life in Zihuatanejo. A more personalized way to explore this market is with The Tides’ Chef Mario as part of a cooking class.

Tell him your favorite Mexican dishes (anything from basics like guacamole to more complicated dishes like lobster-stuffed chile rellenos topped with a poblano sauce), and he will teach you how to select the ingredients in the market and then prepare them at the resort’s beachfront kitchen. 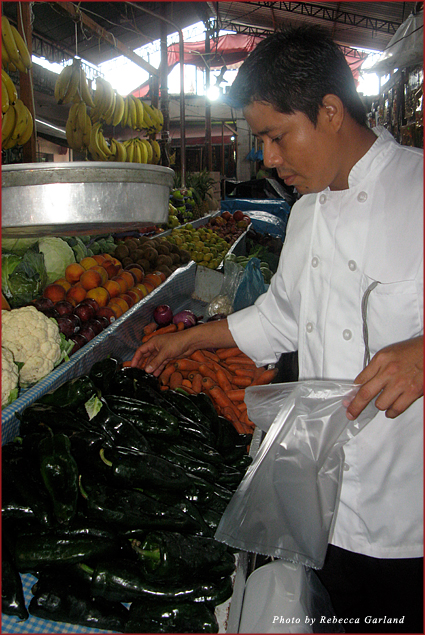 When you aren’t eating the fruits of your (cooking class) labor, there are several upscale restaurants in Zihuatanejo at which to dine. The Tides boasts two of them: La Villa, which serves Pacific-Mexican cuisine, and La Marea, which focuses on a hybrid fare of Mediterranean and Mexican.

You can eat in the restaurants themselves or the Tides can accommodate a couple’s request to have a private meal on the beach, in the middle of an island on a lagoon, or in their wine cellar. Outside the resort, Coconuts is housed in Zihuatanejo’s oldest building, which was renovated from a family’s hacienda into a restaurant more than 25 years ago. Coconuts focuses its cuisine on creative Mexican dishes using fresh ingredients. Another can’t-miss restaurant is Kau-Kan, which enjoys a spectacular view above Playa La Madera and offers fresh seafood dishes such as stingray in black butter sauce and sautéed octopus with grilled vegetables.

Despite Zihuatanejo’s many gourmet restaurants, perhaps the best dining experiences are to be found by simply following the locals. Not to be missed: Tamales Any. Tamales are obviously one of their featured dishes, and they offer 16 different varieties. Be sure to ask for Juan, who will educate you on pozole, a Mexican stew that is traditionally only served in local restaurants on Thursdays. Fourteen years ago, Tamales Any “broke the rules,” he says, and serves pozole every day. Also try La Sierna Gordo for the fish tacos, or Lety’s Casa de Camarones de Coco, which, if you can translate Spanish to English, you’ve already figured out is best known for its coconut shrimp. After dinner, indulge in a tequila tasting at The Tides’ Coral Bar. With more than 135 tequilas to choose from, bartender Marco will cure you of any silly gringo notions you may have that Patron is quality booze. (A tip: The best tequila Marco served me was Don Fulano Extra Añejo. You will thank me later.)

If you need a more active night than sipping cocktails, take a taxi to nearby Ixtapa. Christine is an upscale disco that starts late (after midnight) and finishes early (toward daybreak), featuring high-tech light shows and a DJ spinning dance music. Or make like the locals and hang out in Zihuatanejo proper. Bandido’s offers live music for salsa dancing Monday through Saturday. The morning after a long night of dancing calls for a relaxing day on the beach. The Tides delivers. Guests lounge on suspended daybeds perched under thatched palapas, complete with orange flags meant for hoisting when drinks, food, or fresh towels are desired.

The service is so spot-on, though, that the beach butlers quickly learn to anticipate their guests’ needs before asking. And you quickly learn that basically whatever you want is yours. No reasonable requests are denied, to the point where you begin to believe that the word “no” is not in The Tides’ vocabulary.

If you are lucky enough to find your palapa situated in Reynaldo’s section, he will greet you daily by name with a smile and will leave you with a “perfecto!” And he’s right. Zihuatanejo. It’s just perfect.