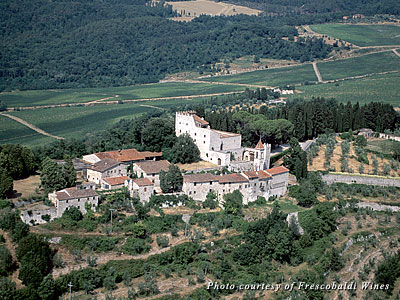 Produced in limited amounts, moderately-oaked, and blended to perfection, Marchesi de’ Frescobaldi wines from the sangiovese varietal come from the nine estates that belong to the 700-year-old Tuscan family company.

“The wine sends the message of a place,” said Lamberto Frescobaldi, the vice president of the company, winemaker for the Luce della Vite Estate, and part of the 30th generation of the winemaking dynasty. “We like to focus on the sites. Each produces a different-quality wine.”

I had a chance to try the wines with the famed winemaker, whose medieval ancestors include Florentine magnates, royal bankers of England, and a personal friend of Dante Alighieri – poet Dino Frescobaldi (1271-1316), who rescued parts of the “Divine Comedy” at the time of Dante’s exile from Florence. [I know!] 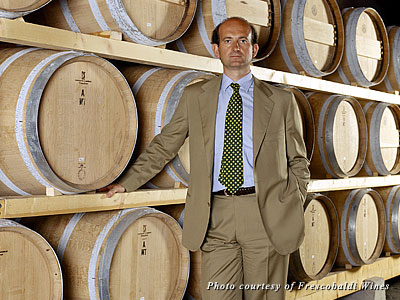 At a private tasting at North Beach Restaurant in San Francisco, Lamberto Frescobaldi spoke about the winemaking part of the family history starting in the 1300s and continuing today.

The first one we tried, a 2008 Nipozzano Riserva Chianti Rufina, came from the family’s thousand-year-old Nipozzano castle. Throughout the centuries, large quantities of Frescobaldi wines produced there used to be sold to such prominent customers as Pope, King Henry the VIII, and artists Donatello and Michelangelo.

For us, Chianti Rufina, from a very small production area of only 800 acres, redolent with the aroma of dark berries, paired beautifully with antipasti of burrata, prosciutto, pomodoro, basilico, and melone.

2009 Tenuta Frescobaldi di Castiglioni, with a rich bouquet and just enough spice to make it a good match for the traditional cucina Toscana, enlivened delicate veal dishes, like my saltimbocca topped with prosciutto and provolone. 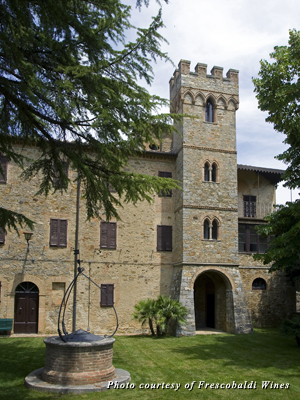 2007 Castel Giocondo Brunello di Montalcino, made exclusively from grapes grown in Montalcino in the central part of Tuscany, was aged for five years – complex, well-balanced, with dark garnet color, floral and berry aromas, and a long, silky finish. It was great preceding tiramisu and macchiato, and just as wonderful on its own.

“Wine is a mysterious thing, and I want it to remain that way,” said Frescobaldi. “Every year vintage is a reflection of the conditions of that year. I want to see the difference between the years in my wines.”

Following yearly changes in Marchesi de’ a Frescobaldi noble wine seems an intriguing, yet accessible undertaking, as it is readily available (while the vintage lasts) in retail stores, restaurants, and online – and very attractively priced.