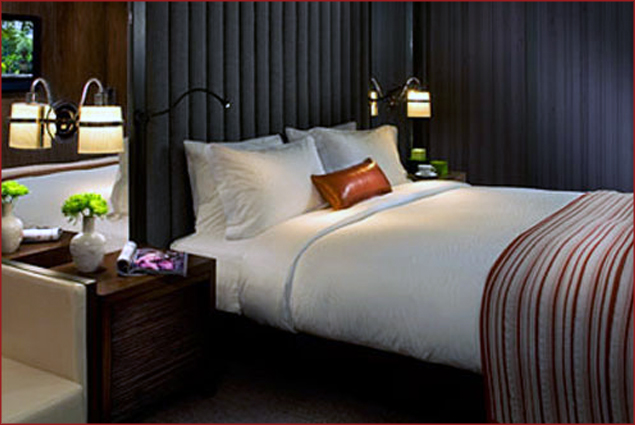 Eventi, new hotel from San Francisco-based boutique hotel company, Kimpton, is bringing its unique brand of style and luxury to 6th Avenue, just south of Penn Station. With its grand opening tomorrow ( May 14th), Eventi is sure to impress all comers.

While some hotels in the city are eager to exploit its location and its luxury offerings to lure in fashionistas and those who love the nightlife, Eventi prefers to cater and focus on its guests, giving them a feeling of home. A place away from it all. With its Frette sheets and Etro spa toiletries stocking all bathrooms, Eventi is a luxurious getaway.

The first thing one notices upon entering Eventi is the floor: red marbling, veined with white. The second thing: the art. Award-winning designer Colum McCartan’s design is witty and adventuresome. Interested in peaking our curiosity, McCartan installed a painting behind the front desk that is partially unveiled by lush, red velvet curtains. A curiosity cabinet near the elevators is a must see. The sitting area, just off the lobby, features a working fireplace–a feature of all Kimpton hotels–and artwork that includes a photograph taken of the trees of Central Park. Taken from the perspective of a person laying in Central Park and viewing the sky through the leaves, McCartan invites loungers in the sitting area of Eventi to partake of that experience of the artist, as the photo is installed on the ceiling. 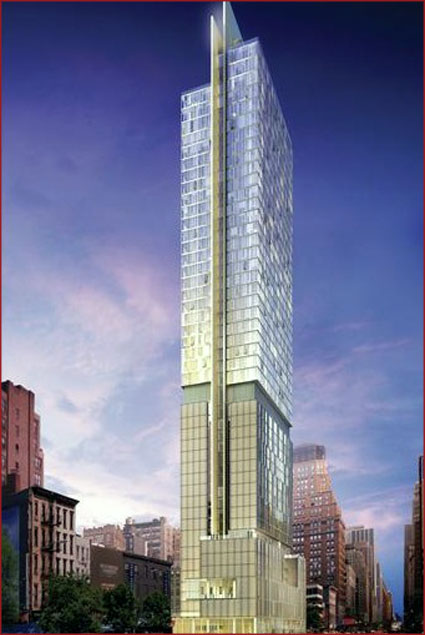 Well-appointed rooms (there are 292 rooms) are as expected, in terms of in-room amenities. Like other luxury hotels, Eventi does away with the traditional “Do Not Disturb” door hanger, opting instead for a light system notifying whether the guest is ready for the room to be refreshed or not. Rooms range from standard (with a king-size bed) to full suites. The suites (there are 53) are truly impressive, and some even have access to awe-inspiring terraces (the bathroom in these spaces are a must-see, as the size rivals that of this writer’s apartment). For guests that are above average, height-wise, Eventi even offers California King-sized beds, at no extra cost. While the standard rooms are as to be expected, the art and design touches–not to mention the floor-to-ceiling windows in each room–add incredible value to the experience. 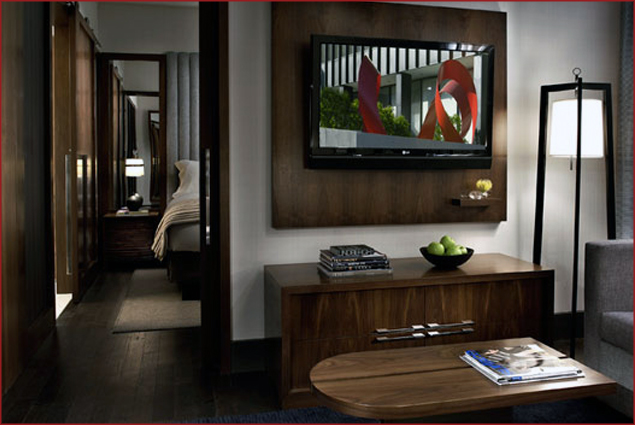 As New York magazine recently wrote, the area south of Penn Station but north of the Flatiron, is seeing a bit of a resurgence. One of the last unnamed neighborhoods in Manhattan, this area was previously known only for the discount beading and wig outlets. Intrepid developers are moving in, however, in making a move to dress up the hood, and give the neighborhood more of that neighborhood feel. In what will surely be Eventi’s major contribution to the public space and community-feel of the neighborhood, is the plaza currently under construction behind the all-glass hotel structure.

Eventi’s public plaza is not set for visitors for another many months, but will feature a 20,000 square-foot multi-level Food Parc, offering farm to table meals. Adjacent to the plaza will be an impressive 20-foot-wide multi-media art screen to be used for public and private events. The second level of the plaza will feature a restaurant that offers New York’s first contemporary Basque cuisine, with indoor and outdoor dining and specialty bar serving a unique collection of whiskeys and spirits. Dining options at Eventi will be operated by China Grill Management, operators of China Grill, Asia de Cuba and Blue Door at Delano. Eventi estimates the Plaza will be ready for the public by this coming Fall.

As if that weren’t enough, Eventi has plenty of event space, a screening room, as well as a spa, fitness center and business center. Barbara Nessim, an artist with permanent collections at both The Victoria and Albert Museum in London, England, and The Smithsonian Institute in Washington, D.C., contributed most artwork throughout the rooms and hotels, most notably an impressive and captivating piece that spans the height of the third and fourth floors. 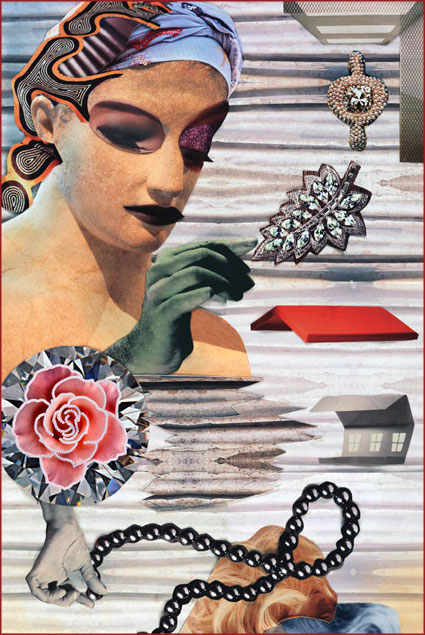 Eventi has given notice to all of us who relegated this particular stretch of 6th Avenue as no man’s land for anything hip or destination-worthy.