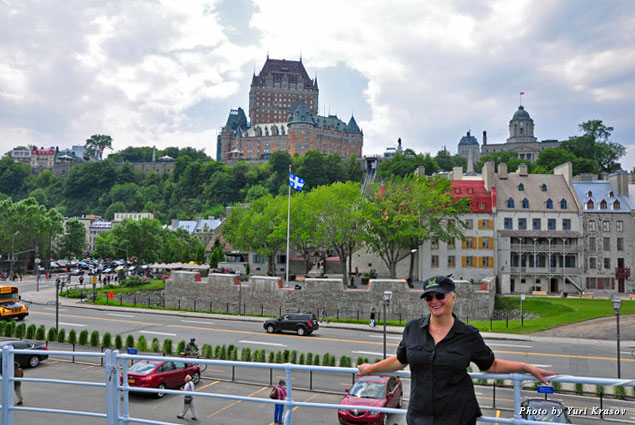 I don’t usually need a special reason to travel to Québec City, but this time there was one. This time, Canada’s little Paris outdid itself with a major exhibition, “Paris en Scène 1889-1914,” at the Musée de la civilization.

That was the reason my husband and I landed in Jean Lesage Airport a day before the show opening and comfortably situated ourselves in the grand Hôtel Château Laurier Québec.

The next morning, before leaving the hotel, we took a swim in a saltwater pool and acquired a key card to a self-serve electronic bar, where my favorite ice wine shared a glass vitrine with other Canadian brands. 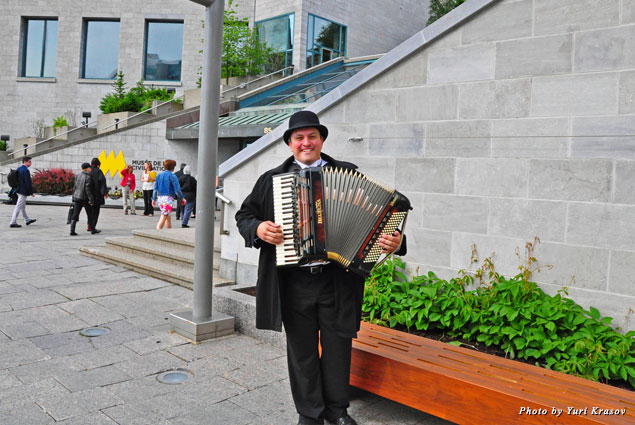 Full of anticipation, I approached the modern glass and concrete building of Musée de la civilization. An accordion player in a bowler hat was playing Parisian chansons in front of the building, and a crowd was gathering by the entrance to the new show. Engaged and engrossed in the remarkable exhibition, I can still see it in my mind—months since the opening. Comprised of treasured artifacts from the Petit Palais and other museums of the City of Light, it stays with me just as a great book or a great theater would, what with all the presented works by Rodin, Camille Claudel, Bourdelle, Toulouse-Lautrec, and Alphonse Mucha; stage costumes of Sarah Bernhardt; marvels of period technology, such as an automobile, bicycle, and film projector; and countless genre paintings and masterpieces of decorative arts. 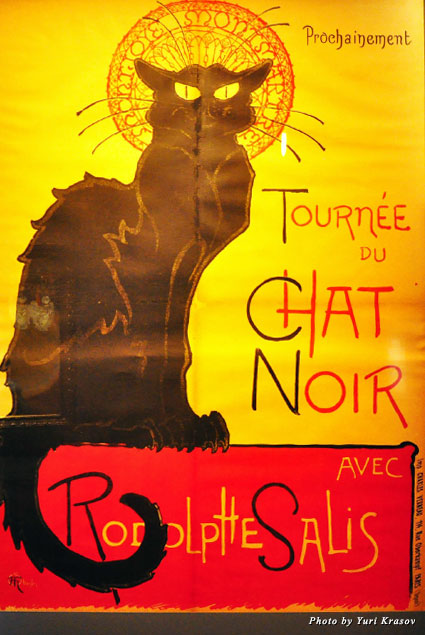 Clear curatorial vision defines this immersive show about an era known as one of the unmistakable markers for European sophistication.

Seemingly lighthearted yet profoundly dedicated to historical accuracy, it unfolds into a fascinating document about the reality of La Belle Époque (the Beautiful Era) and the many contrasting notions that characterized “le Gai Paris” in time of rapid modernization and industrialization, thriving arts, and massive push for entertainment—sans financial limits or moral restraints.

The show opens with an enormous 1895 “Les Halles” painting by Léon Lhermitte, depicting “the belly of Paris” densely populated with busy red-faced female merchants, hunched fish and poultry carriers, and abundant bright fruit of earth and sea against the gray dawn and golden foliage of autumnal city. Measuring 4 meters by 6.3 meters, the painting was lovingly restored before leaving its home for the first time in 70 years.

In the next gallery, an equally grandiose 1888 canvas by Fernand Pelez realistically depicts the circus performers with clowns grimacing in the arena, exhausted children-acrobats awaiting their cue, and miserable old men of the orchestra taking a sullen break in the wings.

Festive and overflowing with joie de vivre, Belle Époque Paris had its darker side, expressed in outright poverty backstage and in less noticeable desperation of nubile “ballet rats,” supported by their hoary admirers. 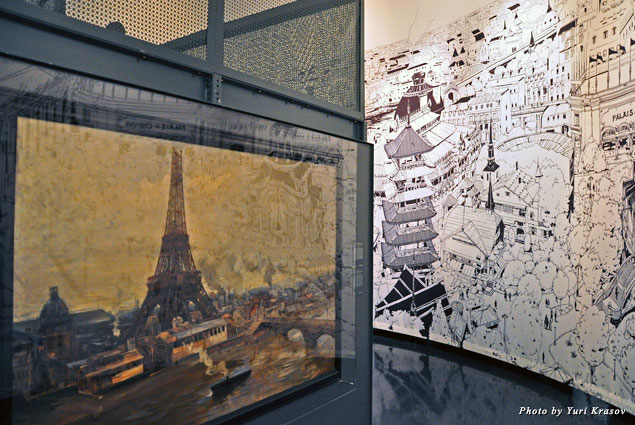 In the consecutive galleries, museum visitors engage with the lives of the bourgeoisie, bohemians, well-known artists, and cabaret dwellers; watch a naughty film through a peephole, marveling at the amount of pieces of clothing taken off by an antique stripper; and observe a city view from the lower landing of the Eiffel Tower just being built for the World’s Fair of 1900.

Wandering through the Musée de la civilization gift shop later on, I took my sweet time admiring the exhibition-themed merchandise, from “Chat Noir” purses replicating the original poster of the famed cabaret to Mucha-inspired tapestries and stained glass earrings.

At the store, a box of unusual spices caught my attention. I began reading the labels. A new culinary trend, the boreal movement, based on local produce and techniques, inspired a collection of locally found plants used as spices and produced by d’Origina. 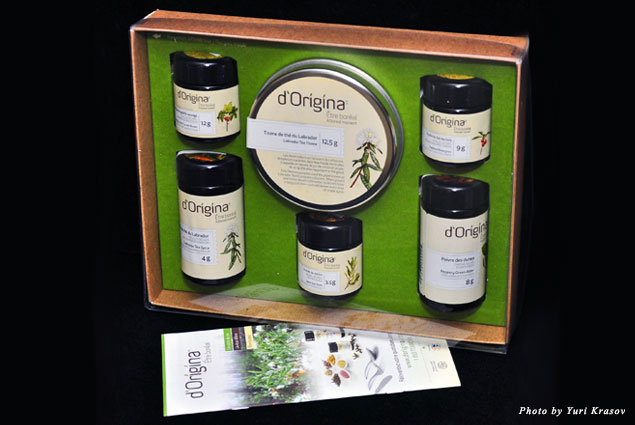 I found out wild currant is a stand-in for onion powder, wintergreen can be used instead of sugar in pastries, and that Labrador herbal tea has a relaxing and calming effect. Green alder seeds for peppercorns, sweet gale for bay leaf, thyme, and caraway—Northern spices instantly became my new obsession.

I had a chance to try Northern cuisine at its best in a couple of Québec City restaurants and decided to start using the new spices in my own kitchen.

Panache Restaurant, situated in an old 19th century warehouse building, is known for its elegant service and historical atmosphere but most of all for its multiple-award winning food. Chef Julien Dumas uses herbs and vegetables from the restaurant’s own garden and creates a variety of original dishes paired with excellent wines from the 700-label-strong collection coming from 14 different countries. 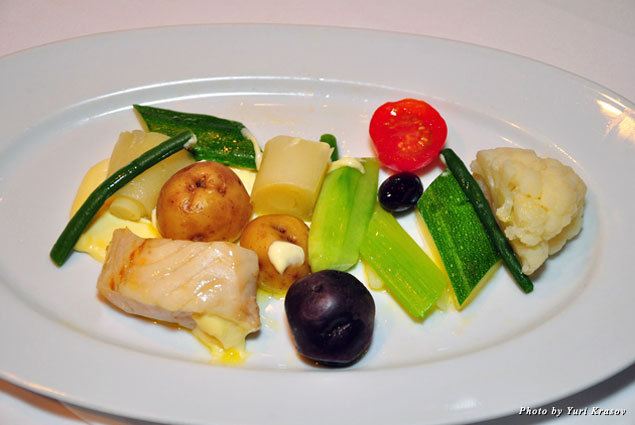 The name Québec means “where river narrows,” and the best views of the city open from the Saint-Laurent River. 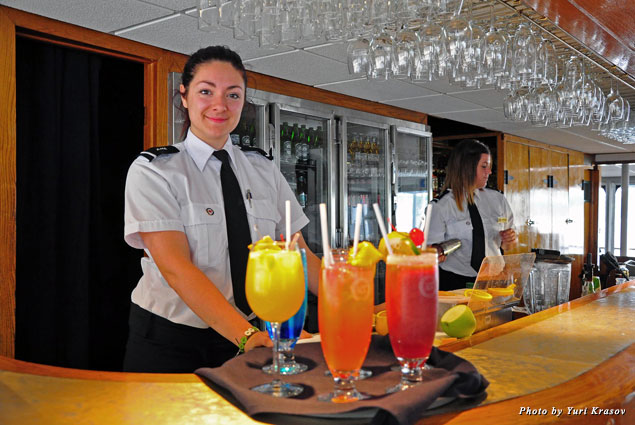 On a pier across from the iconic Château Frontenac we boarded M/V Louis-Jolliet by Croisières AML for an unforgettable river cruise. It included a sightseeing tour to la Chute Montmorency and back with a multi-lingual guide—and a great cocktail bar with smiley service.

The next day, we took part in a detailed walking tour of the city provided by an extraordinary guide and guidebook author, David Mendel, president of Visites Mendel. 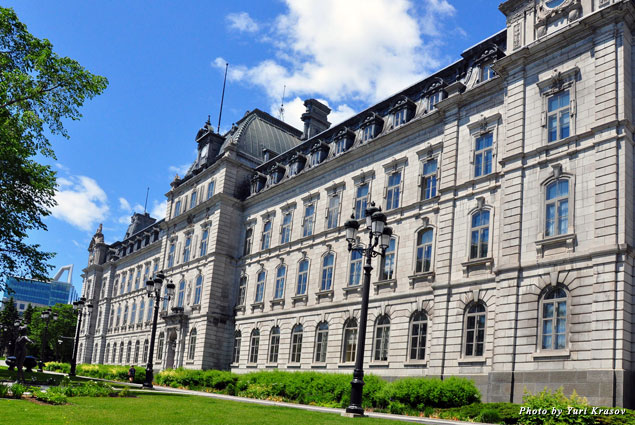 We visited all the monuments of Québec—a UNESCO World Heritage City marked by the intricacies of its complex 400-year history and by the beauty of its diverse cultural makeup—and ended our tour at the richly decorated Parliament building, where the National Assembly of Quebec continues to examine, discuss, amend, and pass the laws of the province in French and in English for more than 125 years.

After the tour, we sat on a sunny terrace for a quick lunch at Auberge Louis-Hébert and then continued to explore on our own, with a mandatory stop at the city’s farmers market, from which I always bring home dark maple syrup and creamy apple butter.

Slightly overwhelmed with the city’s ancient history, we spent the evening before our departure at a hip contemporary restaurant, Le Cercle, in a newly fashionable bohemian neighborhood of Nouvo St-Roch. 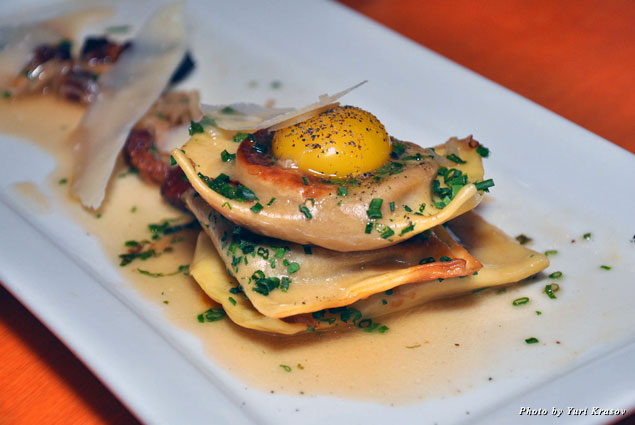 The dining room was packed with a young crowd, the jazz was playing, and excerpts from Westerns were projected on the walls while chef Emile Tremblay worked his magic in the realm of Northern cuisine.

My favorite: Sweet potato ravioli with bacon from a local farmer were topped with a raw egg yolk and shaved Parmesan. The chef explained we were supposed to break the yolk and mix it with a sauce to fully enjoy the dish.

I was especially pleased to learn the kitchen at Le Cercle widely used boreal spices, just like those already packed in my suitcase.