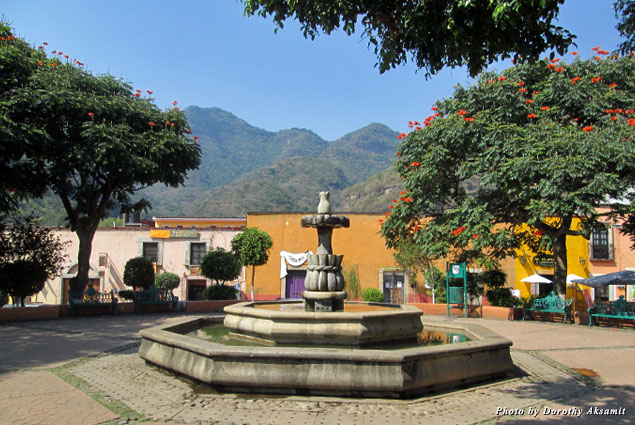 I was skeptical. When I checked in 2010 there were 54 Pueblos Magicos, the tourism hook to lure travelers from Mexico’s beaches to traditional towns with cultural and historical significance. Now there are 84 of these magical towns, and soon every pueblo will be one. And besides, Malinalco is only a two-hour bus ride from Mexico City. How would it stand a chance of remaining a traditional village with an influx of weekend revelers? But with three nights left I decided to go for it because it promised a mountaintop Aztec ceremonial site carved from rock, a museum to go along with the site, and a daily market. 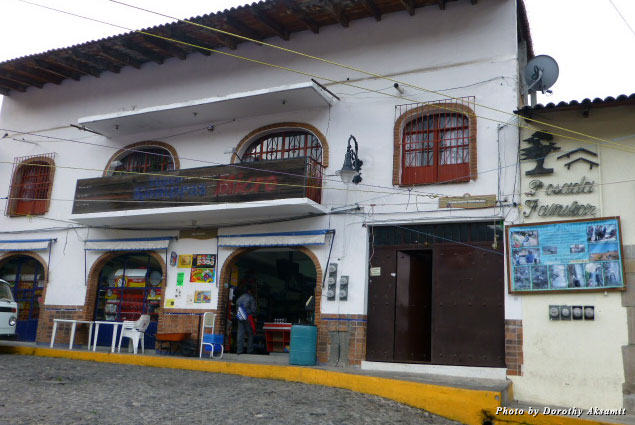 I spent the first night at Posada Familiar berating myself. The main reason I had come to Malinalco was to visit the Aztec site. But I was short on information. Were the more than 400 steps straight up the mountain? If so, I probably couldn’t make it. Could you buy water at the site? Malinalco’s altitude is higher than 5,000 feet. Should I take a guide to haul water? Was it shady most of the way? And why didn’t I bring a hiking pole, a hat, and sunscreen?

I decided against getting a guide so if I couldn’t make it I could slink back down the trail undetected. My fears then began to dissolve when a man sitting on a bench by the museum two blocks from the start of the trail found a broom, unscrewed the handle, and handed me the perfect hiking pole. I followed him a few steps to a very blue house where I was able to buy a straw hat. 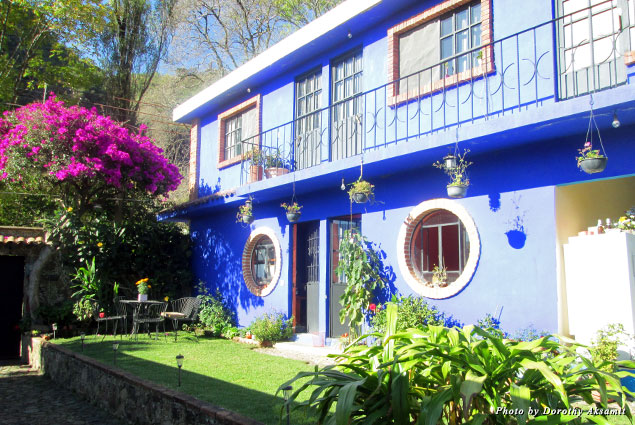 The gate to the site opens at 10, and I wondered if I could sneak in earlier and take pictures before the sun was high. But the entrance was gated and well organized with restrooms and a kiosk selling snacks and water. Luckily, I bought three bottles of water—and could have used one more. 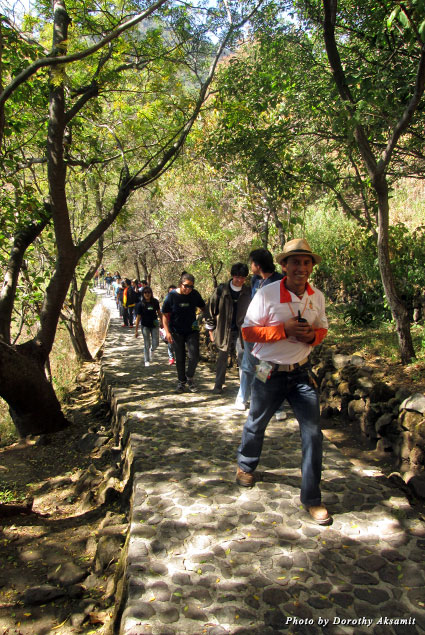 The trail turned out to be a wide, cobblestone-stepped path that slalomed up the mountain, mostly in the shade. The trek up the trail turned out to be as interesting as the ceremonial site. The Hill of the Lost Idols (Cierro de los Idolos) is the name in the guidebooks, most likely named by missionaries, but locals call it Los Piramedes, after the small pyramid at the site. 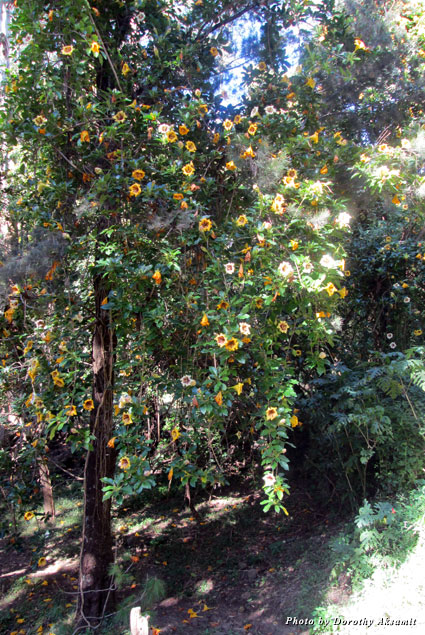 Malinalco lies at more than 5,000 feet, so the trail begins at a sub-tropical level amid lush flowering trees, shrubs, and flowers. Trailside signs in English, Spanish and Nahual (the language of the Aztecs) explain the topography and flora as you ascend, finally reaching the desert, home of the cactus. Arriving at 10 a.m., I had the trail to myself for an hour or so, poking along, reading the signs, enjoying the views, and imagining the elite Aztec warriors on the way to their initiation.

Just as I reached the Aztec site, a high school tour of at least a hundred kids arrived, one of the boys carrying his giggling girlfriend the last several steps. 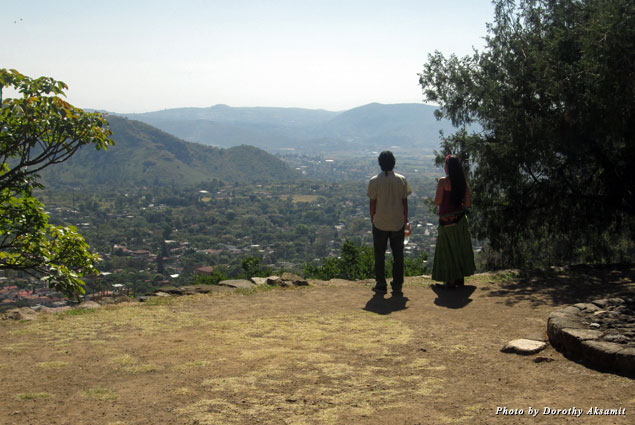 The view from the top sweeps over the valley of Malinalco with the town in the center surrounded on three sides by jagged mountains. It is not only a stunning view but also gives a good idea of why it was impregnable until the assault by Cortez.

I climbed the wooden stairs beside the rock-carved ceremonial center where Aztec warriors were initiated into the highest ranks. Tourists can only peer into the black hole as entrance is forbidden. But all is not lost; the museum below has a replica of the cave-like structure. The rock pyramid in front of the cave can be climbed, and there are a couple of other rock foundations. 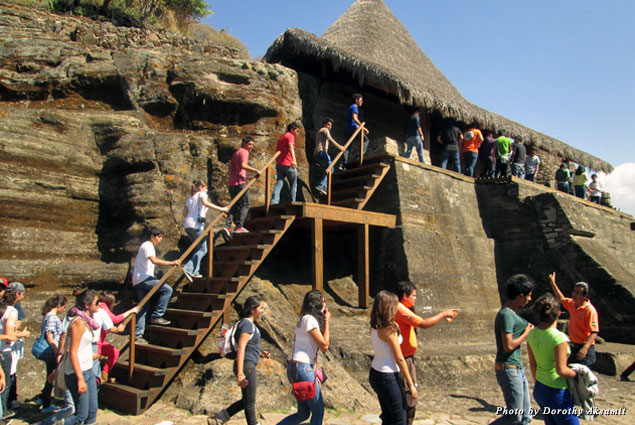 The trail is shady most of the way, and there are plenty of places to stop and rest. I spent about three hours moving at a leisurely pace, but sprinters could dash up and down in half an hour. Back at the street entrance, I stopped in a little kiosk by the road, bought another bottle of water, and watched a woman with a paddle and a tub of sugar and water nestled in a bucket of ice churn a batch of the famous Malinalco nieves, or sorbets. I couldn’t resist my favorite flavor, the salmon-colored mamey. 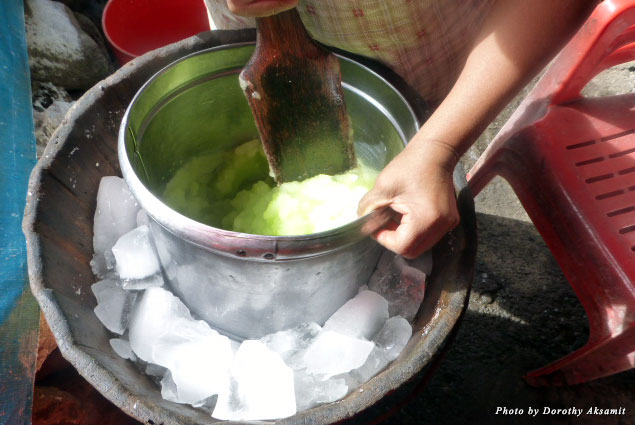 I planned to drop by the Luis Mario Schneider Museum, return my mop handle, and have a quick look around at what I expected to be a dusty collection of artifacts. I couldn’t have been more wrong. The thoughtfully designed modern museum is built around a patio and is filled with imaginatively displayed artifacts. It is a fitting memorial to the 30-year love affair Schneider had with Malinalco. At the entrance you can look beyond to the garden that houses the replica of the main building at the top of the Hill of the Idols. In a gallery to the left are temporary exhibits. On my first visit, a beautiful bronze statue of a ballet dancer was another surprise. 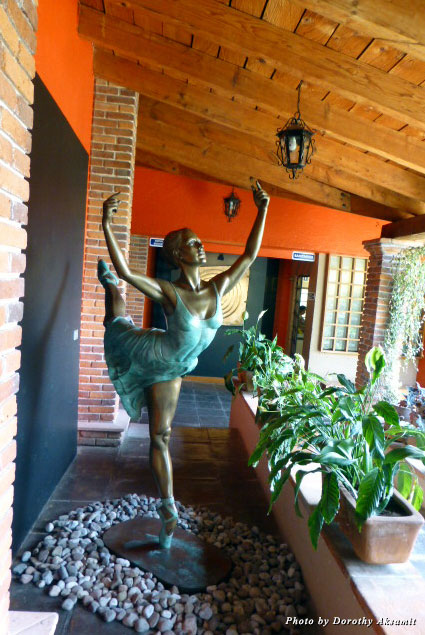 Schneider was interested in everything from pre-history to the daily life of the Aztecs to the flora and fauna. I ascended a curving ramp to the middle world where the guide pointed out a series of glyphs representing the mali grass for which Malinalco is named. Then we descended another ramp to the dimly lit underworld, my favorite part of the museum. Tree roots stretched past an exposed burial site where a skeleton rested above a replica of small faces, Las Caritas, incised on the side of a cliff. Nearby are the cliff paintings of Los Diablitos, the little devils. These represent two of the 34 archaeological sites in and near Malinalco. They also represent the first inkling that, of course, I would have to return for further explorations.

At the bottom, an impressive stone statue of the god of the underworld presides over a glass floor, where each glass square frames small clay faces and other artifacts found by residents in the barrios of Malinalco.

Back on the main floor, a few of the hundreds of stone gods and goddess represent the complex gods of the Aztec Pantheon. The gods have more than one form and function and Huitzilopochtli is, variously, the god of the earth, the source of all life; the sun, which nourishes the crops; and warriors, who supply the daily diet of sacrificial victims in order to keep the sun moving across the sky.

Gods of the agricultural cycle were honored daily, among them 400 gods of pulque, the alcoholic drink of the fermented maguey cactus. But pulque was strictly controlled; only the nobility could indulge and only on specified days. One of the most interesting artifacts is a beautifully carved replica of a ceremonial drum depicting dancing jaguars and eagles. The drum represents the highest form of Aztec carving and can be found in the nearby town of Toluca. By now my return was assured. I would stop by Toluca on the way back to Malinalco.

An uncomfortable looking metal suit of armor worn by the conquistadors and a wooden saddle were two of the colonial exhibits. All 240 species of butterflies of Malinalco are mounted in plastic cases and a display of pressed leaves and flowers overwhelm the imagination. There is also a glassed-over, floor-level aquarium where some of Malinalco’s famous trout swim round and round a pole.

I was on sensory overload by this time and still needed to cross the courtyard to see the House of the Jaguars and Eagles, the cave-like replica from the Hill of the Idols. A fanged serpent guards the entrance to a circular room where a bench holds sculptures of three eagles and a jaguar. In the center is the eagle throne, where blood rituals were performed. Behind the eagle, a circular receptacle carved in the stone floor received the blood sacrifice that would fuel the sun’s journey across the sky.

On the way out through the garden I passed by the mali plant, looking a bit like pampas grass as it waved goodbye. As an added surprise, a humming bird—one form of the god Huitzilopochtli—was visiting a cactus plant. Even if you don’t ascend to the Hill of the Idols, visit the museum. It costs less than a dollar and there are three guides to show you around. I look forward to returning.

As with most of our travel fears, mine were unfounded. Malinalco definitely is a Pueblo Magico, and I was reminded that to have a true travel experience you have to take a leap into the unknown.

Busing From Mexico City to Malinalco: The Good, the Bad, and the Beautiful Escape by Bus for a Day Trip to Cuernavaca, Mexico