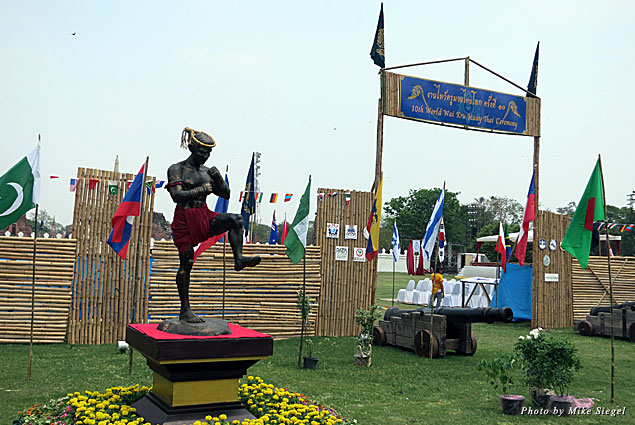 There are many reasons I find myself getting lured back to Thailand. While tropical weather, exotic beaches, luscious mountains, incredible food, and world-famous hospitality are surely enough to keep anyone coming back to “The Land of Smiles,” the opportunity to get kicked in the face is not high on my must-do vacation list. Yet, that is precisely why I’m here.

“Here” is the K. Glanboot Thai Boxing Camp in the town of Kanchanaburi, about a two-hour drive west of Bangkok. The Thailand Authority of Tourism (TAT) invited a mix of journalists and actual Muay Thai professionals and students from around the world to promote the camp and the country’s signature martial art, Muay Thai, also known as Thai kickboxing. 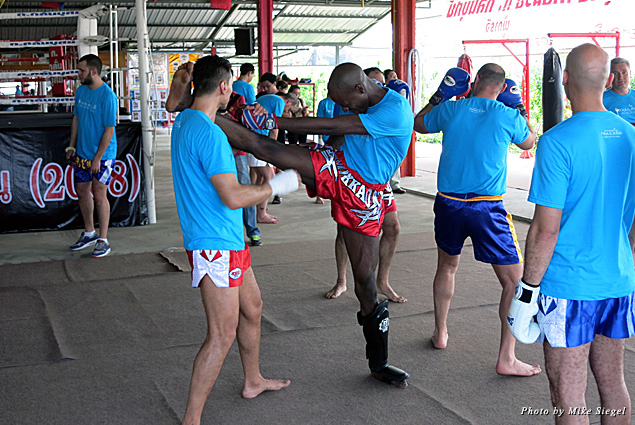 Police Major General Kamonsan Glanboot, police commander of the Kanchanaburi region, founded the camp in 2013 as a way to not only pass down Thai tradition but also serve as an avenue to keep the local youth off the streets, in shape, and away from drugs.

I am neither a Muay Thai student nor a troubled local youth. I took one karate class at my local YMCA as a child and hated it, and my martial arts experience began and ended with Bruce Lee movies. Yet, here I find myself, halfway around the world getting schooled on the best way to punch and kick a hanging bag. I feel I am winning this fight with an inanimate object, although my sore hands and feet an hour later tell me it may have been a split-decision.

Along with the camp instructors, I received helpful tips from my fellow American traveler Bradley, a cheery 25-year-old from the Los Angeles outskirts whose father is a Muay Thai instructor and former pro. Bradley has been a Muay Thai student since he could crawl, and it showed; even the locals seemed impressed by his skills. I, on the other hand, was starting from scratch. 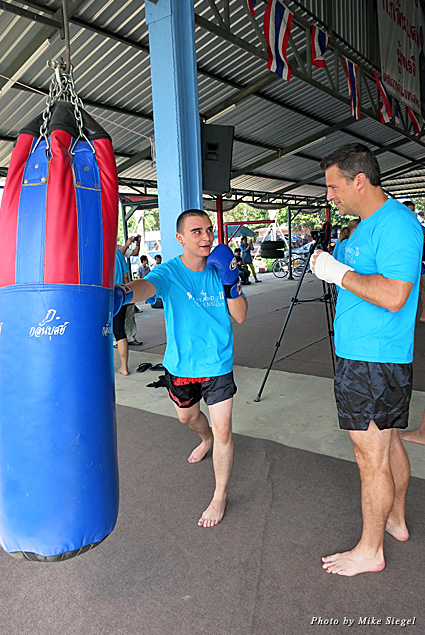 One of the most difficult elements of learning Muay Thai is, oddly enough, the music. During training and actual bouts, the sounds of droning horns and beating drums are pumped throughout the arena. Imagine a lone bagpiper wailing at various tempos non-stop and there you have the Muay Thai soundtrack.

Bradley tells me the music provides varying rhythms for the fighters to move to, but I think it’s more to get them angry enough to want to kill anything with their bare hands and feet. Hell, Rocky Balboa may have trained to cheesy ’80s tunes, but it seemed to work for him. After an hour of Muay Thai “music,” I would have welcomed a little “Eye of the Tiger.”

After watching Bradley train along with a number of our European contingent of actual professional fighters, I realized there would be no full-contact sparring for me on this trip. I’ve done enough damage to my brain cells over the years, and I’m hanging on to the ones I have left. I was content with the few tips I learned (keep your hands up around your head, stay balanced and on your toes, etc.), and my bout (we’ll call it a draw) against the heavy bag. Besides, it’s hot and it’s Thailand—isn’t there a pool nearby?

Luckily, my hotel had the pool situation covered and then some. We were housed at the beautiful Dheva Mantra Resort along the River Kwai (pronounced “kway,” our guides assured me, and not “kwhy” like we Americans say). Like many, I only knew of the region thanks to the famous 1957 Academy Award winning film “Bridge on the River Kwai” (great flick—check it out), and that World War II-era bridge still stands to this day, drawing visitors from around the world. 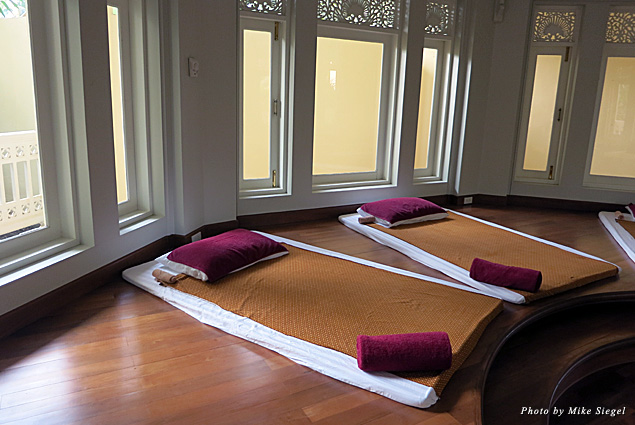 The Dheva Mantra boasts five separate buildings, a saltwater infinity pool, a full spa, meeting facilities, banquet rooms, a wine bar, and the Rice Barge, a floating restaurant on the river. The rooms were spacious and the vibe was peaceful. The pool was heaven-sent during the March heat, and the swim-up bar was also a nice feature when I wanted a poolside smoothie.

If the sprawling Dheva Mantra is out of your range, we were treated to a tour of a couple other hotels of varying price points, both situated on great locations along the riverbanks. On the more budget-friendly scale was the U Inchantree Kanchanaburi, a 24-room boutique hotel with a young, hip, minimalist vibe and views of the famous bridge. For a happy medium between the Dheva Mantra and the Inchantree, a good option is the Royal Riverkwai Resort & Spa. Its 66 rooms are set on lush Balinese-inspired grounds and seemed tailor-made for relaxation. You can’t really go wrong with any of the three hotels. 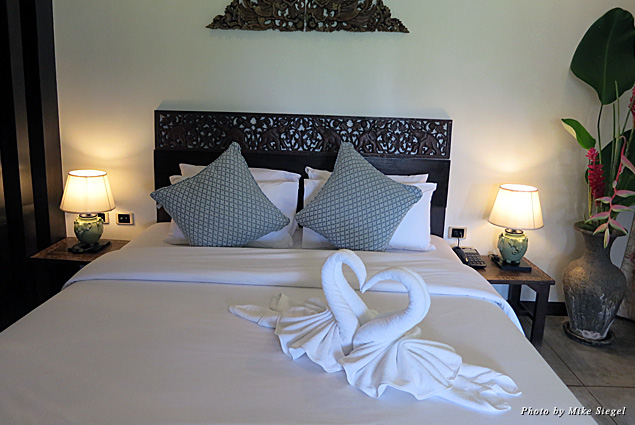 As if my ineptness at kickboxing wasn’t enough to remind me I would be useless in a fight, the next day saw us headed to a new camp and a new kind of training: sword fighting! The Buddhaisawan Conservation Center of Thai Sword Fighting is a family-run operation dedicated to preserving the Thai martial art locally known as krabi-krabong. The center’s location is no accident, as it sits near a historically important ancient battlefield site where Thai swordsmen bravely fought off Burmese invaders centuries ago.

Since most of us had little to no experience with swords, the instructors gave us bamboo sticks to use as mock weapons for our exercises. Even in a country that doesn’t file lawsuits at the drop of a hat like the good ol’ USA, I saw refusing to distribute sharp blades to neophytes as a wise move on their part. 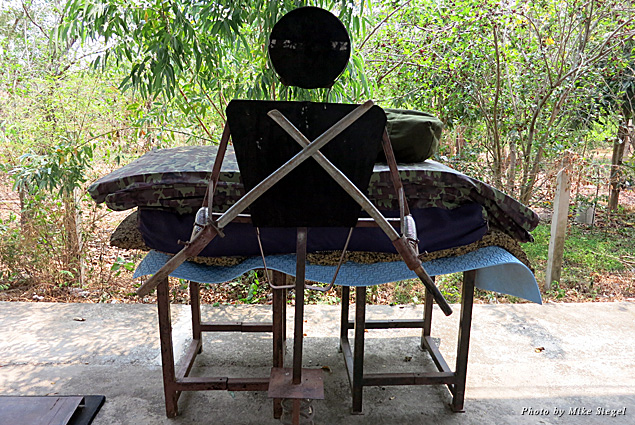 Still, we did get a workout and, better yet, no annoying music as accompaniment. We were taught the basic stances, strikes, and defense moves and finished with a bit of “sparring” against one another. The instructors gave us a demonstration with actual blades, which was akin to a finely choreographed stage fight. They were fast and athletic, and I imagined what it would have been like to see their skills in actual battle long ago. Let’s just say I didn’t envy the Burmese.

The culmination of the trip was taking part in the 10th World Wai Kru Muay Thai Ceremony on March 17 in Ayutthaya. About an hour outside of Bangkok, Ayutthaya is one of Thailand’s ancient capitals. Set amongst ruins of ancient temples in the middle of Phra Nakhon Si Ayutthaya Historical Park, the ceremony is the highlight of the annual Miracle Muay Thai Festival.

During the ceremony, Muay Thai boxers from around the world converge on Ayutthaya to perform the Wai Kru, or respect-paying ceremony, to show the boxers’ regard for their parents, the sacred objects, and their teachers and pay homage the legendary Thai folk hero, Nai Khanom Tom. 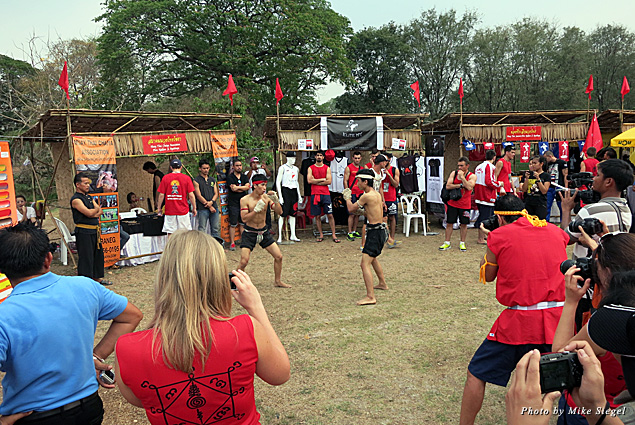 Opposite the ceremony grounds are booths representing varying schools, T-shirt stands, food vendors, and practitioners of traditional sword-making and tattooing. Under a large open-air tent was a boxing ring where Muay Thai fights continued throughout the day. Fighters of all shapes and sizes, from 115-pound teenagers to hard-hitting women, went toe-to-toe all afternoon under the steaming tent.

The main attraction, whose image appeared on nearly every sign and poster for the event, was Muay Thai legend and current champ Baukaw Banchamek, or simply, Baukaw. It was clear Baukaw was the man most of the locals were here to see. His bout was against a clearly overmatched but game Chinese fighter, and Baukaw knocked him out in the third round, to raucous applause. Only a fool would have bet against Baukaw on this day. 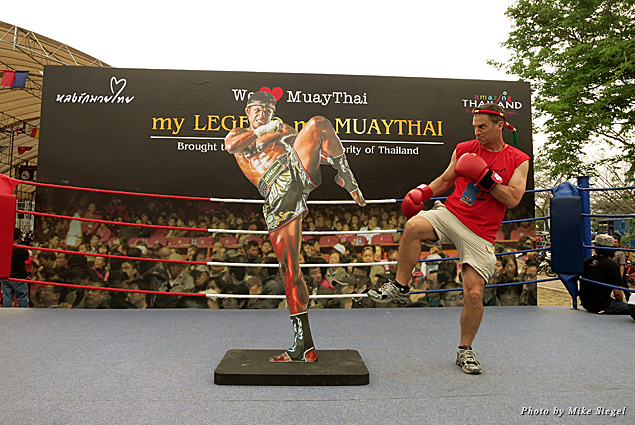 When it came time for the ceremony itself, I admit I felt like a bit of an impostor sitting amongst a thousand actual Muay Thai students and professionals, but I figured I would stick close to Bradley and follow his lead. If he bowed, I bowed, if he kneeled, I kneeled. Accidentally insulting a martial arts master is a good way to meet an untimely demise. I kept a low profile.

After the speeches, a parade featuring live elephants, and a lengthy blessing of the event, we lined up to pay our respects. We bowed, we kneeled, a master teacher struggled to place the traditional rope headband around my too large head, and then walked a gauntlet of Muay Thai masters in their traditional garb, some of whom greeted me by patting my head and asking where I was from.

We all then lined up on the massive lawn into neat rows to be led by none other than Baukaw himself in the Wai Kru. Bradley explained that fighters do this short dance before every fight to pay respect to their teachers, and everyone’s Wai Kru is different. But in a mass ceremony like this one, we would all be following Buakaw’s lead as if he were leading the world’s largest yoga/tai chi class. Fine by me, I’d been faking it since I left Bangkok.

As the rain began to sprinkle, the ceremony ended and we made our way back to Bangkok. I realized I had been given an experience most serious Muay Thai students and fans around the world could only dream of. I can’t say I’m much more of a fighter or a swordsman than when I arrived, but rest assured I did my best.

I don’t think Baukaw needs to worry about me taking his title any time soon.