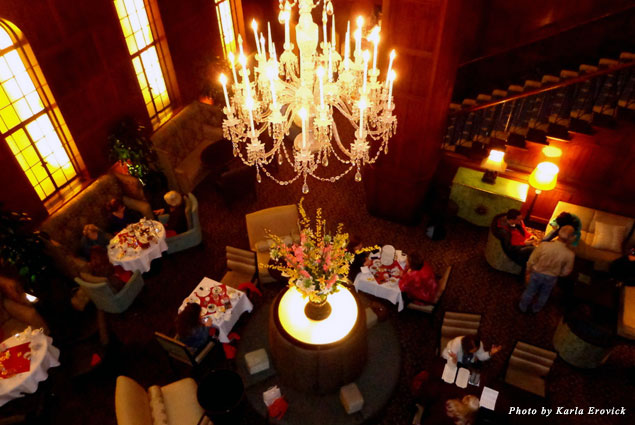 Does Portland have a sexy side? The question nagged at me as I arrived in the Rose City for a weekend of adventure. The elements were certainly present: a food culture, shopping, art, music, and wine. Regardless of what the television show “Portlandia” would have us believe about the zany character, I was on a mission to uncover its romantic nature—if one existed. 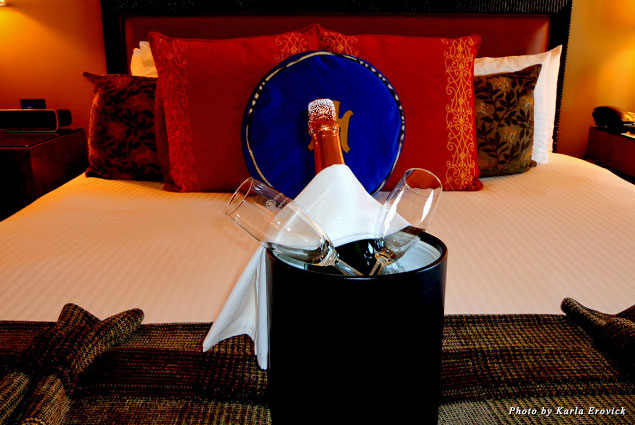 By far the best part of a trip to Portland is staying in a suite at the iconic Heathman Hotel. Curious about the hotel after a mention in the book “Fifty Shades of Grey,” I was interested in creating a sensual experience of my own. Arriving to champagne and chocolate was a good start. Luxurious king size beds with silky sheets and pillows of my choosing added to the romance. Attentive room service from a delicious menu ensured that I didn’t have to leave the room. Nightly turn down service included an eye mask and earplugs, which came in handy.

A sunny day encouraged an exploration of the downtown. Portland’s foodie culture highlights locally grown and organic ingredients. Dining can be a surreal experience ranging from Michelin-starred restaurants to neighborhood haunts and the ubiquitous food trucks. 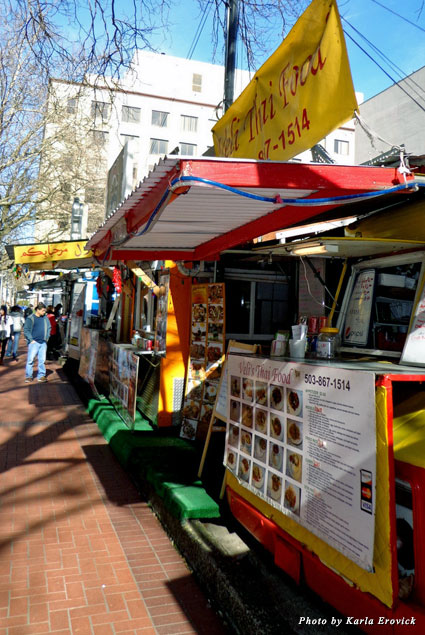 Speaking of food trucks, the phenomenon can be credited to Portland starting some 17 years ago. You can find any type of cuisine you desire: Thai, Korean, Vietnamese, Caribbean, Mexican, Japanese, and all manner of American specialties. Served in containers to go, you can create an international feast and enjoy it in a nearby park or in the comfort of your suite. 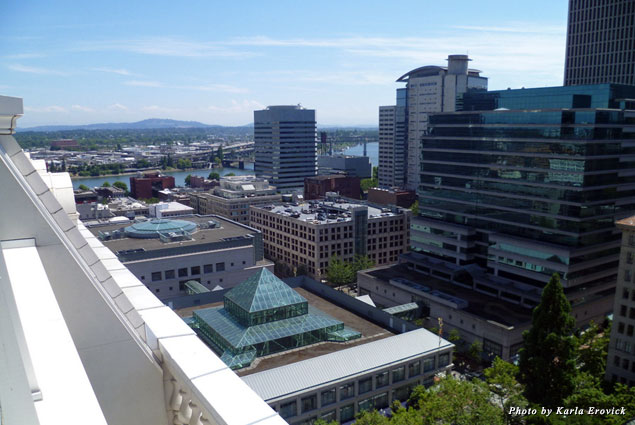 A romantic start to the evening included cocktails at Departure, with fantastic views from the rooftop bar at the Nines Hotel. The futuristic décor, light bites, and imaginative cocktails make this a perfect date venue. Sunsets are magical as the sun dips below the horizon and the city lights slowly emerge.

Our next stop was Ambonnay, a dedicated champagne bar. With an offering by the glass, flight, or bottle, this was sure to be an adventure in bubbles. For those who adore bubbly as I do, it was heaven. The menu caught me by surprise, as I did not recognize any of those offered since they all hailed from very small French producers. Ambonnay curates its selection based on serving champagne for the sake of champagne, delighting in the unusual. 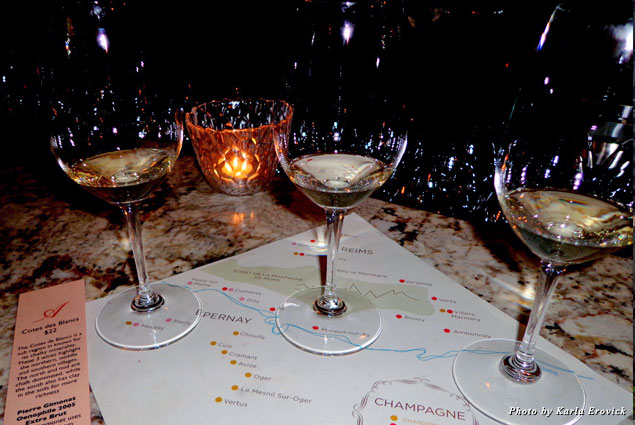 We began with a champagne flight from Côtes de Blancs, a sub-region known for its chalky minerality, served in wine glasses to better experience the aromas of each selection. I favored the Larmandier-Bernier Longitude NV Extra Brut, drier than Brut and delightful. Next I sampled a Brut Rose whose salmon color and nose enthralled me. It was tempting to spend the entire evening sipping bubbles, but there was so much more to explore.

For a bite to eat, Pix Patisserie combines tapas and wine with decadent desserts. Dining on sumptuous small bites, perfect for sharing, along with wine in a Spanish tapas bar setting created just the right ambiance. We chose from the beautiful and decadent desserts to take away for enjoyment in the privacy of the hotel later in the evening. Voodoo Donuts offered an x-rated donut featuring a male anatomy-shaped chocolate bar, which we decided to forgo in favor of our confections. 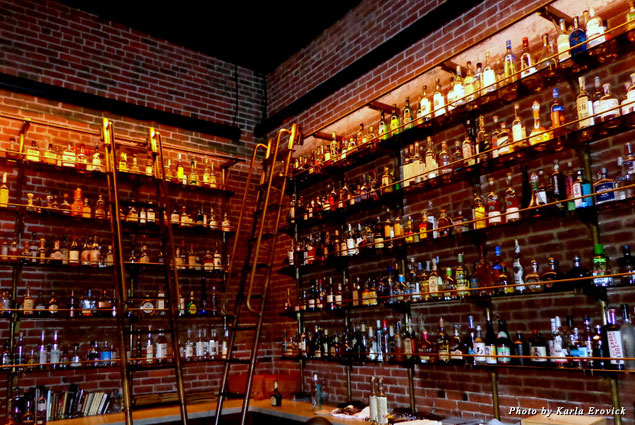 While the night was still young the new Multnomah Whiskey Library was a great stop for a drink in the sultry atmosphere of an Ivy League library. Instead of displaying floor-to-ceiling books, the bar showcased bottles of whiskey all waiting to be discovered. The dim lighting and cozy leather furniture created a sexy atmosphere. 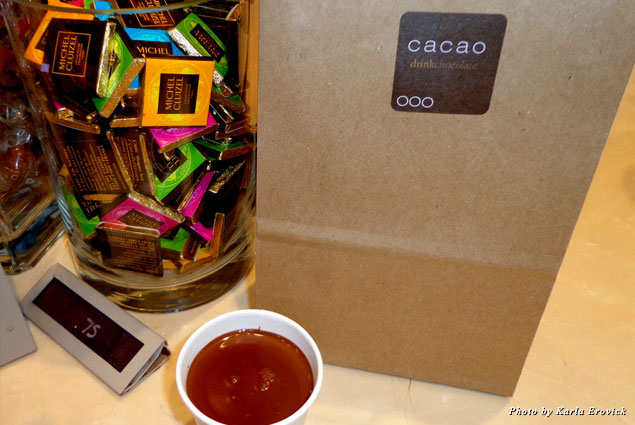 Although we missed the chocolate tasting offered in the hotel library courtesy of Cacao, we visited the store and stocked up on chocolate delights, including cups of decadent hot chocolate served in two-ounce shots and by the cup. It was the perfect aphrodisiac, especially the spicy dark chocolate selection.

After a decadent weekend in Portland of eating, drinking, and exploring I can attest to Portland possessing a sensual side—if you know where to look. 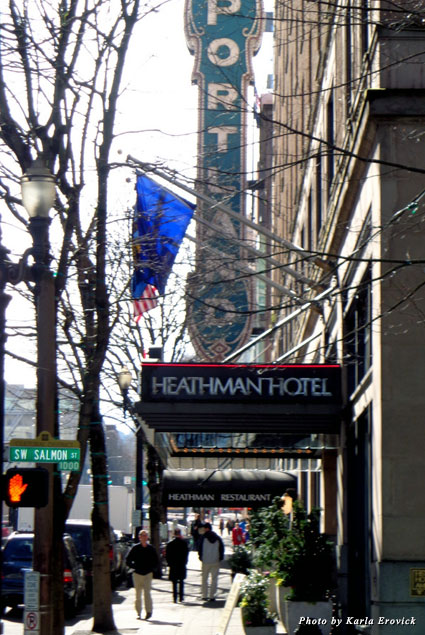 Putting on the Ritz at the Nines Hotel