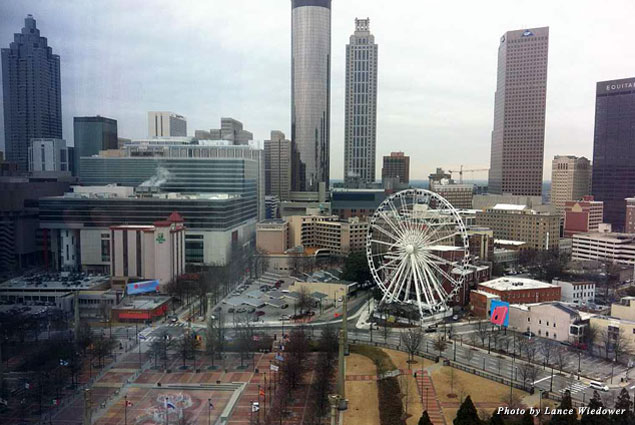 Families traveling to Atlanta will find plenty of fun in this Southern metropolis, from sports and parks to a world-class aquarium, museums, and more. In addition to family-fun attractions, Atlanta has unique local boutiques and world-class retailers, an unparalleled food scene, and great nightlife found in the city’s unique neighborhoods.

We’ve visited Atlanta several times and always end up finding our way to a couple of the neighborhoods just east of Downtown and Midtown: Little Five Points and Virginia-Highland. These spots have cool vibes centered on eclectic shopping, quality local restaurants, and unique bars to match every taste. But our most recent visit to Atlanta included our 7-year-old son, so while we did carve out some time in our weekend to do a little shopping—and we of course still hit up some of the city’s great foodie spots—this trip would have a family-fun focus.

Our visit to Atlanta was over a long three-day weekend—just enough time to really dive in deep to what the city has to offer. And despite our constant movement, we still didn’t visit all the sights we had hoped to see. For example, the Jimmy Carter Presidential Library and Museum, the Martin Luther King Jr. Center, Zoo Atlanta, and the Margaret Mitchell House ultimately didn’t make the cut. 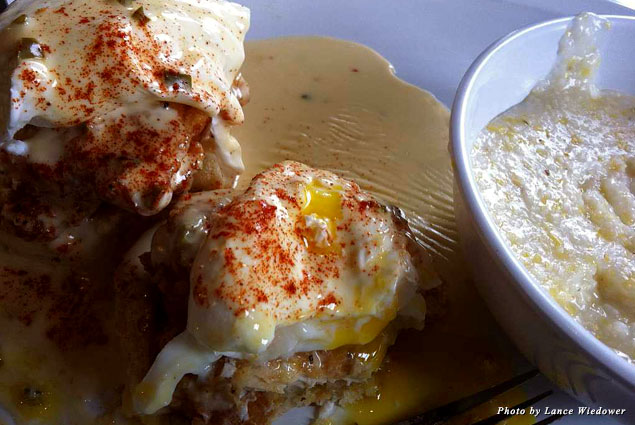 We started our weekend on Saturday morning with a visit to the Old Fourth Ward District and Highland Bakery for a taste of their fried chicken Benedict and a ridiculously awesome French toast made from the bakery’s fresh bread.

With full stomachs, we headed a couple of miles north to Midtown to start our day of exploration at the High Museum of Art. When we visited the High, we saw the “Go West! Art of the American Frontier” exhibit, which was on display through April 13. The museum’s special exhibits through the years have included world-class art, such as a long series of works from the Louvre in Paris a few years back. 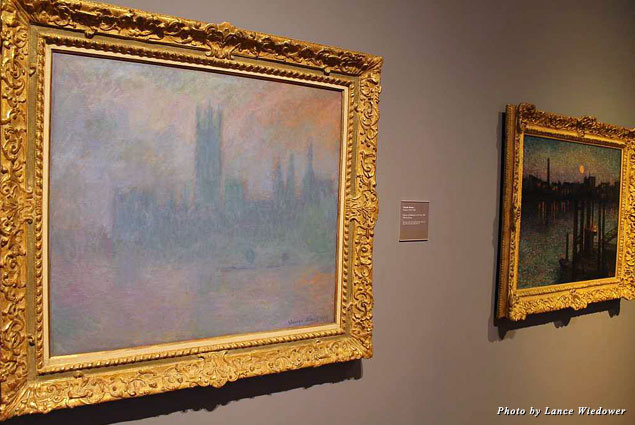 In addition to outstanding special exhibits, the museum has a range of American and European works; modern, African, and folk art; and a wonderful collection of decorative arts. 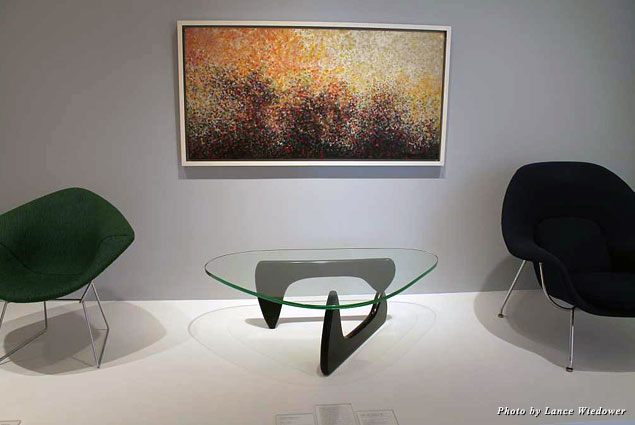 The strong collection of furniture probably makes sense, considering Atlanta is one of the capitals of interior design in the United States.

After a couple of hours at the High, we spent some time shopping the boutiques and thrifts of Little Five Points before heading back Downtown for a 4 p.m. reservation to tour the CNN Studio. 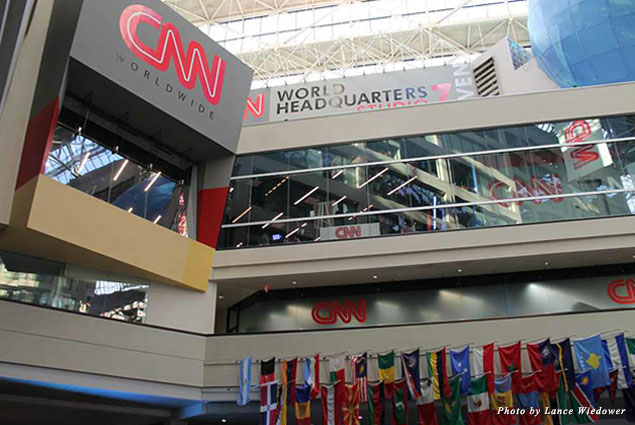 We made the Omni CNN Center our base of operations, and that was a good decision for much of our Atlanta experience. Even though many great restaurants and shopping can be found in the city’s diverse neighborhoods, a number of the family attractions are Downtown. And by staying at the Omni CNN Center, we didn’t have to walk outside for our tour of CNN Studio or later that night when we attended an Atlanta Hawks game at Phillips Arena. The hotel, CNN headquarters, and the massive Omni hotel are all part of one big complex.

But back to the CNN Studio tour. For a couple of newspaper journalists and their attention-loving son, the CNN Studio tour was a fun experience. One thing we did realize, though, is that the tour would be better during the week when the shows are being broadcast. With no breaking news while we were there, the programming being aired was taped.

But we did get to learn about the studios and the news-reporting process and see the newsroom in action. 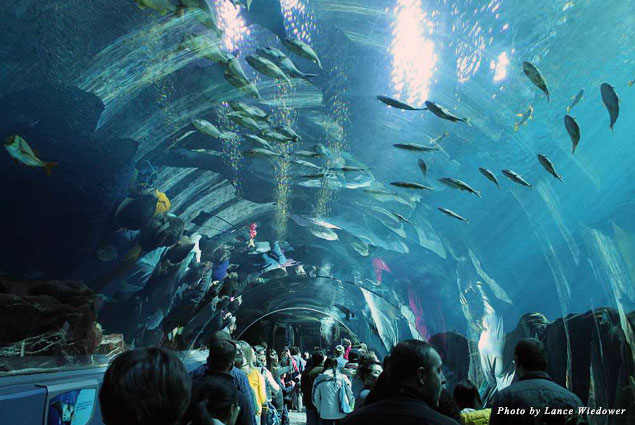 One of the highlights of our visit came Sunday morning when we toured the massive Georgia Aquarium. I’m not sure if this is the world’s largest aquarium, but just based on its impressive dolphin show and the Ocean Voyager exhibit, the place is worth a visit. The Dolphin Tales show is actually a 30-minute theatrical presentation with songs and lots of dolphins doing all the wonderful things dolphins do.

Ocean Voyager features four whale sharks, four manta rays, and thousands of other fish in a 6.3 million-gallon exhibit. It can be seen from a slow people-mover belt in a 100-foot-long underwater tunnel to a massive viewing window, which at 23 feet tall by 61 feet wide and 2 feet thick is the world’s largest. The exhibit was designed to house whale sharks, the largest fish species in the world.

The aquarium has plenty of other exhibits that can make a visit last several hours. We spent a couple of hours just hitting the highlights but could’ve spent twice as much time seeing the whole place.

After a fun lunch of hotdogs at The Varsity (“What’ll ya have!”), we came back Downtown to explore Centennial Olympic Park and the World of Coca-Cola. 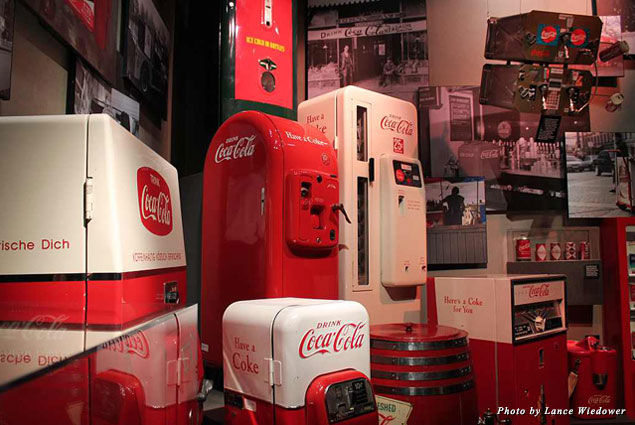 At the World of Coca-Cola, I got a little nostalgic for the brand of my childhood with the multitude of signs advertising the world of Coke. After learning about Coca-Cola’s history we were able to sample loads of products made by Coca-Cola and sold throughout the world.

Visiting Zoo Atlanta would’ve been in the cards if we had more time. We had access to the Atlanta CityPASS, which would have given us admission to the zoo as well as the CNN Studio tour, Georgia Aquarium, World of Coca-Cola, and the High Museum. When we visited, the Georgia Aquarium wasn’t very packed, but during peak times the CityPASS should prove to be very beneficial since it enables the user to skip the long lines.