Exploring Maui in All Directions 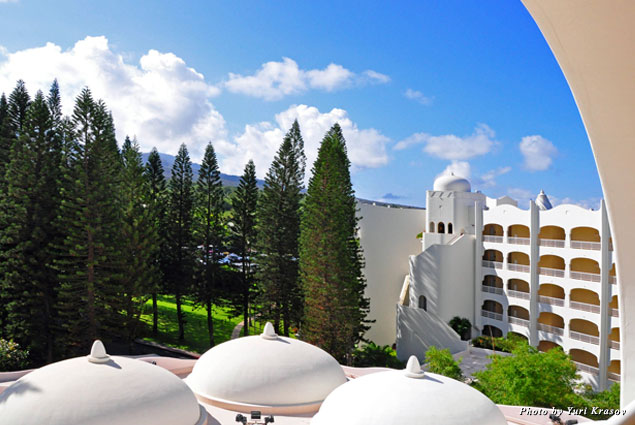 Every year before going on vacation, I dream of white sandy beaches, watery cocktails, and cheap whodunits in paperbacks. Spending all day lounging in the sun doing nothing seems so heavenly. Then, while on the beach of my dreams, I inevitably catch myself planning to drive to a couple more places “since we’re already here.”

Hawaii—the favorite vacation place for so many—surely has the best sandy beaches in the world and is extremely conducive to lounging in the sun, but it would be unwise to skip other amazing things to see and do, especially if you’re already there.

This year, my husband and I traveled to Maui with the goal to study the island more or less in depth. Instead of staying in one place and doing daily radial routes, we booked different hotels in all four directions of the map. This tactic proved successful by bringing in some interesting discoveries, and also by creating an impression of a longer vacation. 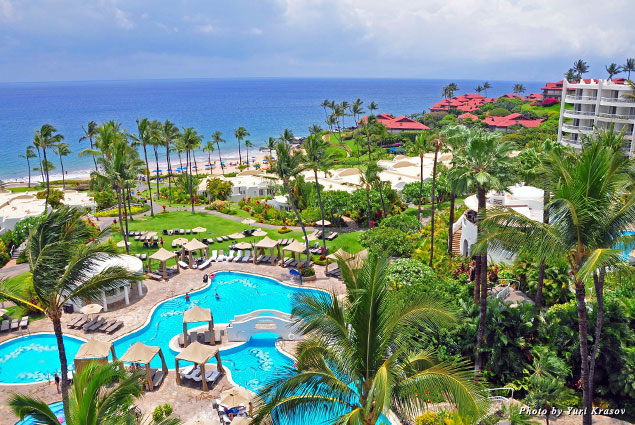 Our first room with a view was reserved at The Fairmont Kea Lani in South Maui. Designed by a Spanish architect, the white-walled hotel adorned with domes and towers resembles the iconic “Pink Palace”—the Royal Hawaiian in Waikiki. The “white palace” is surrounded by serene green lawns, palms, and blue pools. Kō Restaurant, voted the No. 1 resort restaurant on Maui, puts a lot of emphasis on “plantation-inspired cuisine” with its Spanish, Portuguese, Filipino, Japanese, Chinese, and Korean origins. Kō cocktails are made with fresh fruit juices and complement Kō specialties, such as seafood Laulau steamed in ti leaves.

Not far from the hotel is a little-known rocky beach at La Perouse Bay. Jewel-colored tropical fish obviously prosper here, undisturbed by crowds of tourists. A modest monument in the shape of a truncated pyramid is dedicated to La Perouse, a famous French explorer and the first European to land on Maui in 1735. 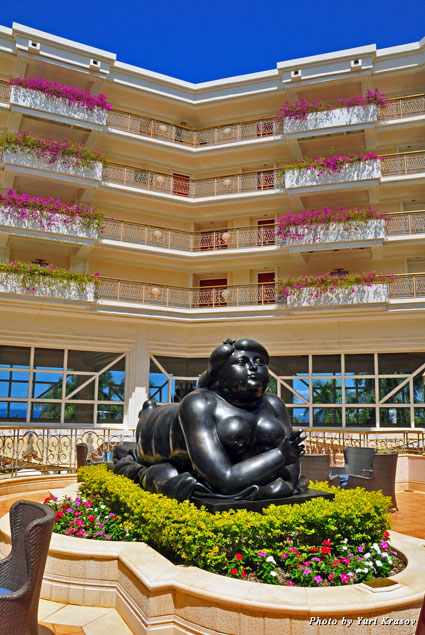 Our next point of interest was the Grand Wailea Resort, known for its 300-pieces strong Waldorf-Astoria collection of art—from wide-hipped bronze Venuses of Fernando Botero to delicate, colorful glass sculptures of Dale Chihuli and translucent wooden bowls of the Hawaiian artist Jim Meekhof.

We dined at the hotel’s restaurant, Humuhumunukunukuapua’a, named after the official state fish of Hawaii and famous for its fresh seafood preparations. 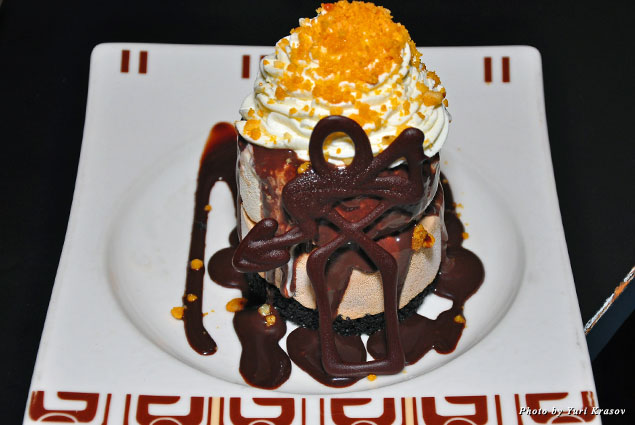 My multi-layered dessert of Kona coffee ice cream and macadamia nuts was decorated with a chocolate figurine of a fisherman with a spear, inspired by a statue outside the restaurant.

The next morning, we headed up north to Nāpili Kai Beach Resort. A front desk receptionist greeted us with “Welcome home!” Repeat visitors appreciate this family-friendly place for its gorgeous beachfront location and relaxed ambiance. The room rate includes many pleasantries, such as beach chairs and umbrellas, barbecue facilities, and daily educational and entertainment activities, among them the Nāpili Kai Foundation keiki hula show and the Slack Key Show hosted by the local celebrity George Kahumoku Jr. 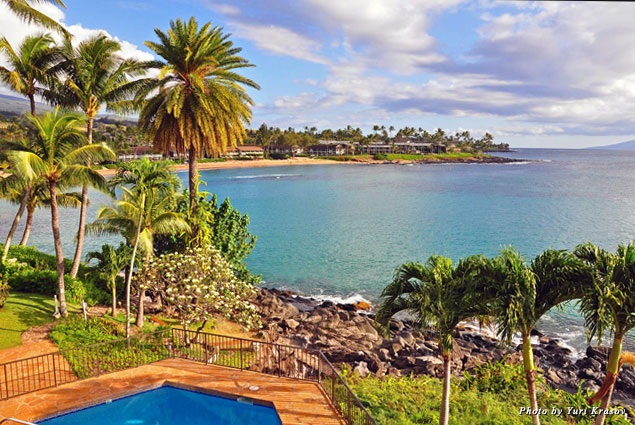 Families come here with their elders and newborn and make fast friends with each other and resident cats.

The Sea House, a resort restaurant, changes its offerings often for the sake of frequent diners. 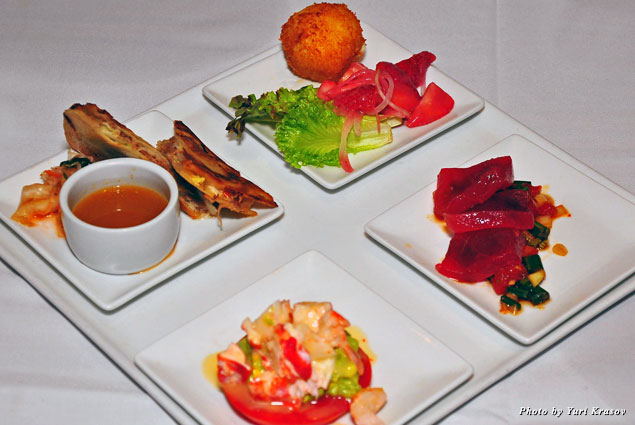 Our further exploration took us to Kā’anapali Beach in West Maui, which happens to be my favorite beach in the world. The sand seems softer and cleaner here than anywhere else, the water for some reason is warmer and calmer, and the sunsets are unobstructed and more dramatic than elsewhere. 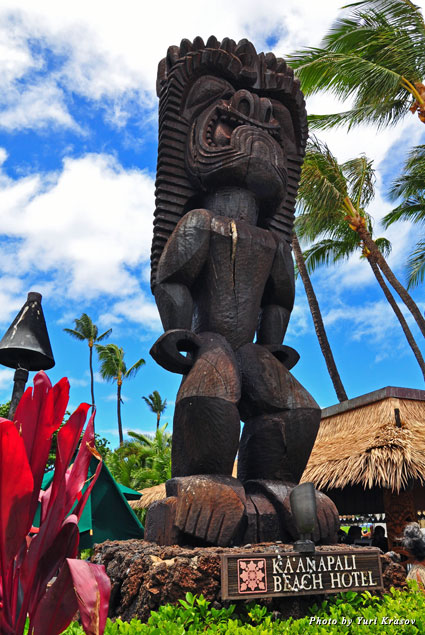 Kā’anapali Beach Hotel, which opened 50 years ago, occupies an oceanfront building behind blossoming plumeria trees and a whale-shaped swimming pool. This “Hawaii’s Most Hawaiian Hotel” takes pride in its cultural programs, which are offered free to its guests. True to my habit, I studied a long list of offered activities (lei making, hula and ukulele lessons, and Hawaiian language introduction sounded very tempting), but the moment I crossed the velvet sand and stepped into the tender waves of Kā’anapali Beach, everything else seized to exist. I spent many hours chasing fish and watching the sunset from the water, trying to outlast all other swimmers.

The only activity I agreed to take part in was the famous, award-winning champagne brunch at the hotel’s Tiki Terrace Restaurant. 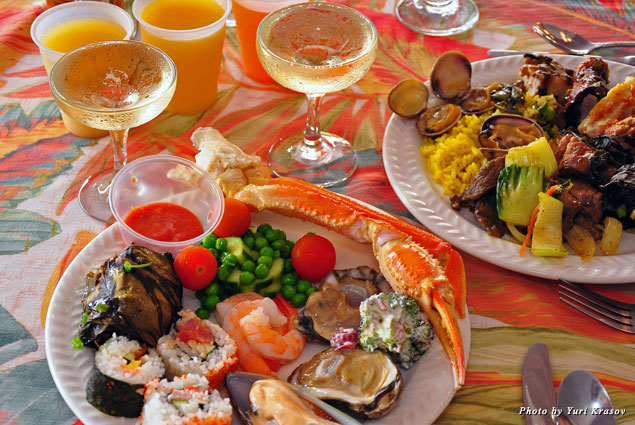 An open-air dining room was festively decorated and filled with hotel guests and local families. A Hawaiian band was playing on a small stage, and graceful hula dancers were performing their silky moves. The buffet was overflowing with island delicacies.

Soon we headed to the eastern shore of Maui via Hāna Highway, with its 600 curves and 54 one-lane bridges. I made a list of en-route sites well aware it would be easy to miss them on the winding road. The most accurate directions sounded like “between mile markers 6 and 7” or “half a mile past marker 16 on the left.”

We couldn’t have missed painted bark eucalyptus trees with their rainbow-colored trunks and stopped more often than intended to look closer at the lush greenery of the rainforest, shimmering bamboo groves, scarlet flowers, black lava rocks, and turquoise lagoons. 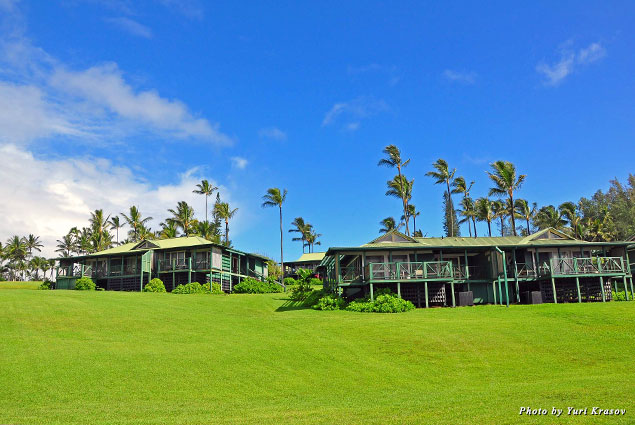 The beauty of the road was only comparable to that of our destination, whose very name sounded like music: Travaasa Hāna.

Located on a picturesque cliff over the Pacific, this secluded resort is so huge the hotel staff drives guests around in golf carts.

Tired from sitting in our car we were happy to go on foot, especially since on every step there were stunning views of the ocean, exotic blooms, mirror pools, or cozy cottages to be admired.

After a skillful massage at the Spa at Travaasa Hāna, I stepped into an open-air lava rock hot tub. Palm trees gently swayed overhead, the breeze was soft and warm, and the clouds had just started to acquire a rosy evening hue. Behind a green lawn the endless blue of the ocean merged with the sky.

Seated at the terrace of Ka’uiki Restaurant for dinner we noticed all the other patrons were in couples, and all of them without exception were holding hands, hardly noticing what they were eating. We were in the land of honeymooners!

Although our own anniversary was not imminent, we fell under the spell of this place and were also holding hands—up until our cocktails arrived.

I did notice what we were eating, because all the dishes were not only very well prepared and made with fresh local ingredients but were also listed on the menu with their calorie count, and the count was not scary! I should’ve gone without dessert anyway, but the next day we planned a rugged coastal hike, a swim in the ocean, and then a long trip to the airport and back home. Our wonderful Maui vacation with all its indulgencies was coming to its end.