Exploring a Rosy Out Island 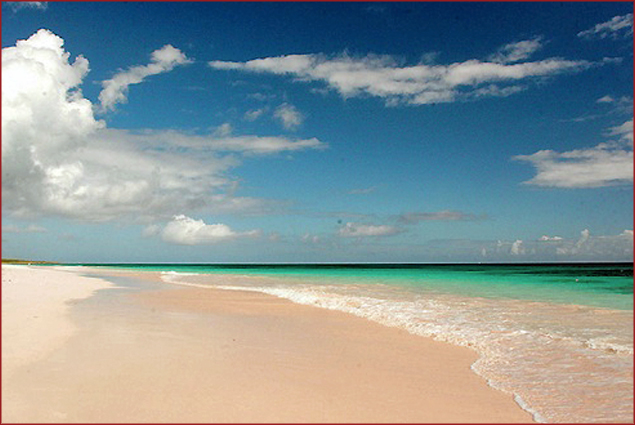 From the lush mangrove forests of Andros Island to the pink sands of Harbour Island, each of these spits of land in the out Islands of The Bahamas (just about an hour’s flight from Miami, Florida) has its own unique character and attractions.

Though many islands are private resorts or celebrity hideaways, the rest are ideal for exploration. Settle into a Friday-night fish fry, drink rum cocktails watching the sun set on a seemingly abandoned stretch of coast, or bonefish in the shallow waters. Give a doff of the cap to the area’s few lingering British customs, including left-hand driving and the odd cricket match (the Bahamas’ national sport).

In early May, I decided to head south from New York for a bit of sun, sand and sea. 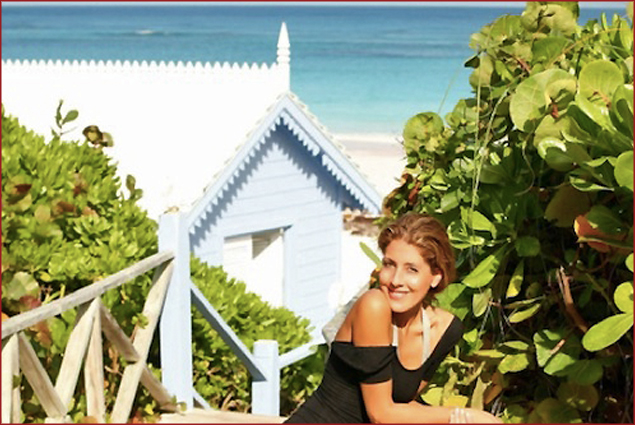 Harbour Island was a natural choice. Some call it The Hamptons of Florida. I’ve been traveling here for about eight years now, and a recent trip fueled my love for being barefoot and living well. It’s is a small, picture-perfect island on the rim of the Bahamas Island chain, 60 miles northeast of Nassau.

An independent member of the British Commonwealth, the island is known for its magnificent pink=sand beaches and casual, colonial charm.

The center of Harbour Island is Dunmore Town, the first capital of the Bahamas, founded more than 300 years ago by Loyalists fleeing the American revolution. While the architecture makes New England guests feel right at home (I grew up in Boston, hence it was very easy for me), the daily pace is characteristically Bahamian and is underscored by the friendliness and charm of Harbour Islanders. 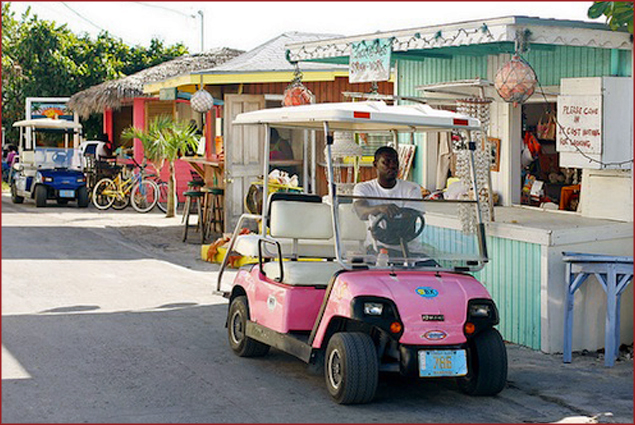 Expect understated chic at Pink Sands, where the beach blushes the delicate color of vin rosé (of which there is plenty on hand), and, depending who you are with, so will you (read: I did).

The 25 pastel Indo-chic bungalows may have a hot designer – and even hotter celebrity guest list – but this resort is all about being cool. Biba founder – and 60s style maven – Barbara Hulanicki mixed Indian, Moroccan and Balinese elements into a giddy new cocktail when she did the interior design for the resort. A modern ethnic décor meets hippie luxe, which was perfect for my weekend wardrobe comprised of caftans and bikinis.

A-listers have all been spotted among the mirrored throw cushions and teak lounging sofas. Yet this retreat maintains its relaxed air, far from the paparazzi, feverish fans, and nouveau snobbery. 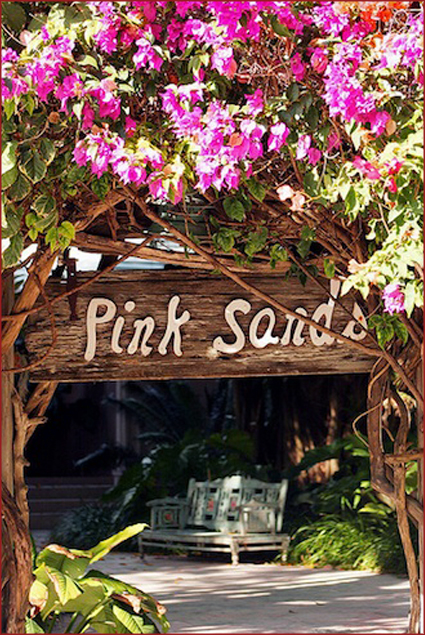 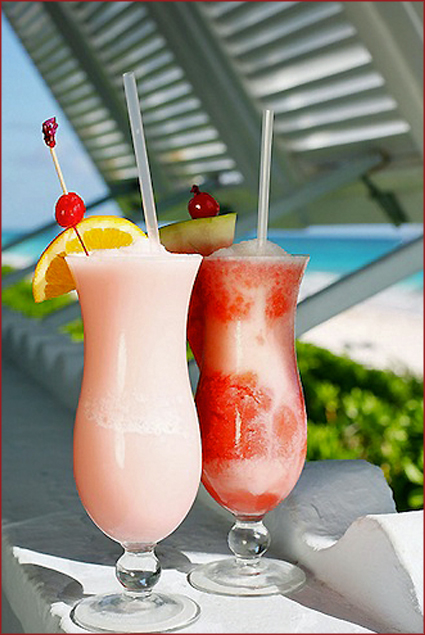 The pastel paradise stands beside its namesake, the glamorous and legendary three-mile strip of pink sand, and it’s a place to lay in the sand (or build a sand castle), dine on gorgeous conch salad, and contemplate, well, just about everything… all sans chaussures.

We landed seamlessly on North Eleuthera from Miami and were met by Salomon, who greets all of the guests. A fun and quirky bit about Harbour Island (affectionately called Briland by those in the know) is that whether you arrive via scheduled charter, commercial flight, or private jet, everyone takes a taxi to the boat landing and then a ferry to Briland. Everyone is equal once they exit the airport, regardless of their bank statements. 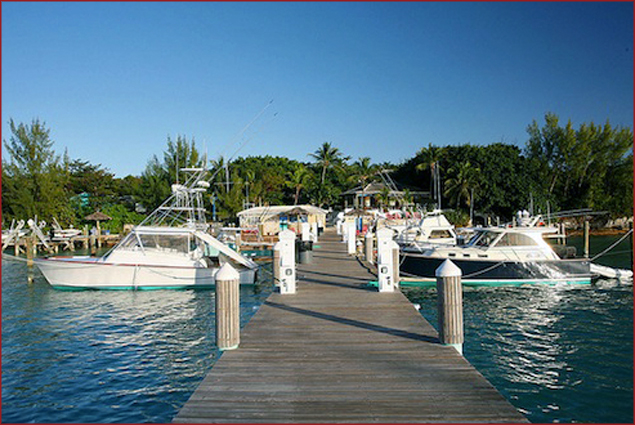 My favorite story involves a top American CEO. The CEO’s assistant called Pink Sands to arrange a Mercedes transfer from North Eleuthera to the ferry. The sales director said, “There aren’t any Mercedes on North Eleuthera. With all due respect, madam, he can take a taxi like everyone else does.”

Tucked into our cottages, one of my friends noted he felt like he was at the summer home of his parents’ best friends. That is what Pink Sands does to you. You do have this incredible sense of joie de vivre. You feel ageless. You naturally walk around barefoot. You have a bloody mary with breakfast. It lets you channel your inner Jane Birkin and all her Bohemian rhapsody, but you still know that sand castle making is obligatory. 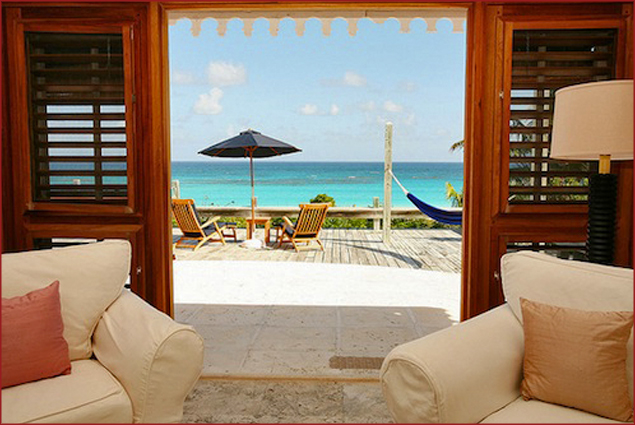 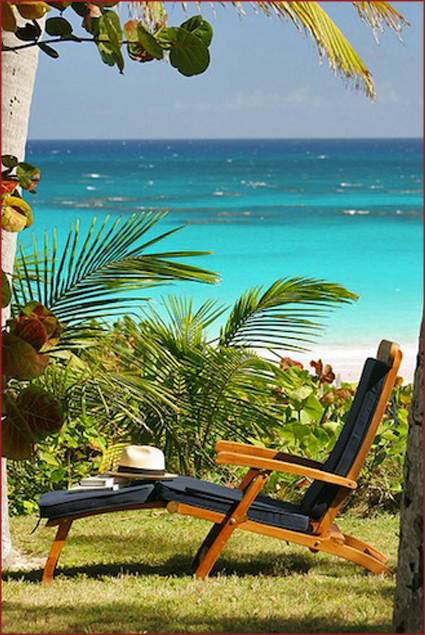 Daily activities? Tooling around in my golf cart like I was choreographing ‘Mr. Todd’s Wild Ride,’ and digging a hole in the sand and creating a mermaid tail around my lower half. Not so good for the Missoni bikini, but a perfectly- matched activity for my soul.

Pink Sands isn’t the place to star-gaze. Rather, it’s a chance to enter the constellation and shine.