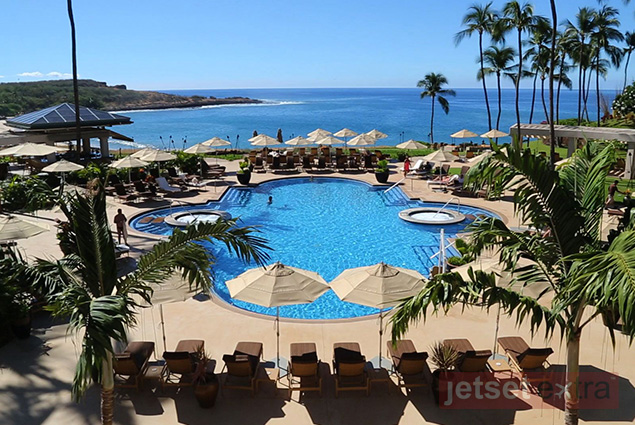 Lana’i is one of the Hawaiian Islands I had never been to. It’s not a large island, but if you are looking to get away from it all, this is the place to do it. There is a lot to do on this little island, though what you won’t find on Lana’i are traffic lights, fast-moving highways, or masses of people.

Lana’i is a very a quick hop from Honolulu via the ‘Ohana by Hawaiian flights from Hawaiian Airlines. We landed at the airport, got our bags, and were whisked away to the Four Seasons Resort Lana’i, Manele Bay. I know what you are thinking, because I thought it, too. Why in the heck is there a Four Seasons Resort on the smallest inhabited island in Hawaii? Well, when you see the video and the images, you won’t wonder any longer.

Our check-in at the Four Seasons Resort Lana’i, Manele Bay was exactly what you would expect: a lei greeting, a conch shell sounding, and a personal escort to our room with in-room check-in. The property is incredible, and because it is placed almost directly on the beach there isn’t a bad view to be found. Our room had an ocean view and a small patio where we could sit and relax and just watch the waves.

The Four Seasons Resort Lana’i, Manele Bay is one of two Four Seasons properties on the island. (I know!) These two properties are completely opposite in esthetic. One is oceanfront with golfing, a spa, and fabulous restaurants, and the other is all about being in the country and relaxing in a lodge-type atmosphere. The Lodge at Koele still meets all expectations of a Four Seasons, but it has the added touch of horses and a bit more of a sporty feel. Clay shooting, horseback riding, and archery are all things you can find at the Lodge at Koele—and don’t worry, they have a spa at this property, too.

The culture and history in Lana’i is very interesting, and visitors can go to the Culture and Heritage Center in Lana’i city to see how the island’s history has transformed over the years. Once a massive pineapple-producing island, Lana’i now only grows plants as ornamental reminders of its past. Dole Park is in the center of town and is a wide-open area where locals and visitors can come to picnic and socialize. Surrounding the park are art galleries, restaurants, and boutique shops. The streets tend to roll up early in Lana’i, so if you are looking for a more action-packed town you may want to seek out another island.

As for what to do during the day, we took a four-wheel drive excursion out to see the Garden of the Gods or Keahiakawelo (“otherworldly rock garden”), as the Hawaiians call it. The gardens are thought to have been created by two Hawaiian kahuna (“priests”), one from Lana’i and the other from Moloka’i in a fight over a reward of great abundance to the winner’s island. It’s quite a change in scenery when coming from the beach; it almost feels like being on the moon. It makes for a fun half-day expedition.

We also took a little horseback ride and some shooting lessons with Lana’i Western Adventures while we were in town. At the Lodge at Kohele, visitors can take a fantastic ride through Lana’i’s countryside as well head up to the shooting range for some fun target practice. I have been shooting many times, but I had never shot with clays. I have to brag for a minute—I shot that clay dead center and shattered it into tiny bits on my first shot! It’s a ton of fun, and a knowledgeable shooting instructor will work with you to make sure you are safe and having a great time.

Between its untouched beauty and relaxed atmosphere, Lana’i has become one of my favorite Hawaiian Islands. It might have something to do with the Four Season’s properties that are there, but hey, you can’t blame me for loving some luxury. I will be going back very soon.