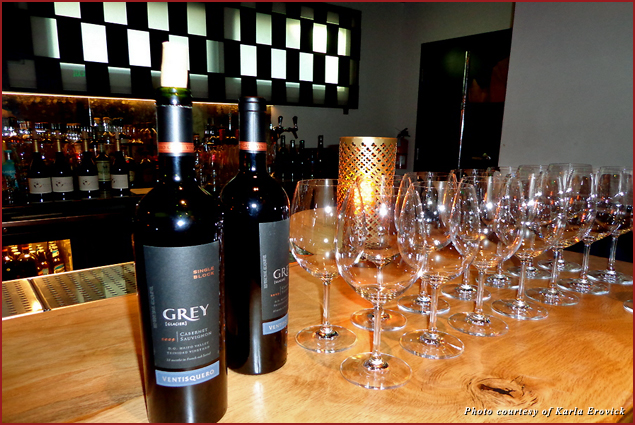 Lolinda Restaurant was the setting for an international evening featuring Chilean wines, a famed Australian winemaker, and delicious South American cuisine. The evening featured a global collaboration with Viña Ventisquero winery of Chile, legendary Australian winemaker John Duval, and cuisine to match the bold flavors. Selecting a menu to pair perfectly with the bold wine was achieved through communication from the winery in Chile with the restaurant in San Francisco. 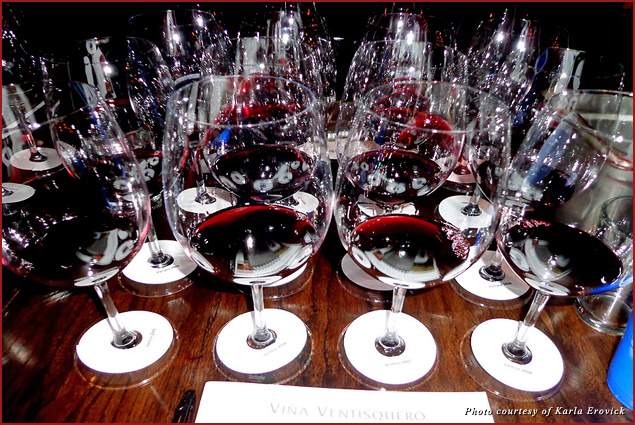 Upon arrival in the spacious upstairs of Lolinda, overlooking the main dining room below, guests were greeted with a glass of red wine from the Grey label. Soon afterwards, we were summoned to a long table with an abundance of filled wine glasses lined up at each place setting.

Before tasting through the two flights, we were given a brief history of the winery and the wine. Then the hard work began, as we tasted through eight wines. 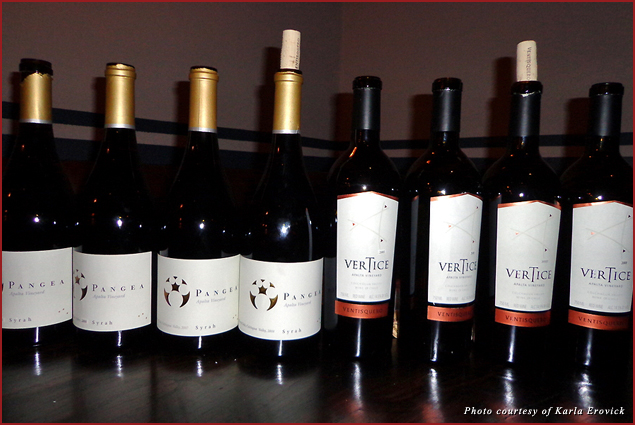 The first vertical flight was a blend of Carménère and Syrah from their Vertice label of vintages 2005-2008. Each vintage contained a slightly different mix of the two varietals, aged in new French oak. The 2005 and 2007 were cooler years, reflected in higher tanins with dark fruit characteristics. The 2006 and 2008 had red fruit  and pepper flavors. These wines are designed to age for 10-15 years.

The second flight was Pangea Syrah from 2005 through 2008. The grapes came from vineyards grown in granite soil. The wine was velvety with aromas of cherry, blackberry, and pepper. It is aged in French oak for 18 months and then 12 months in the bottle, contributing to its smoothness, which was very much to my liking. 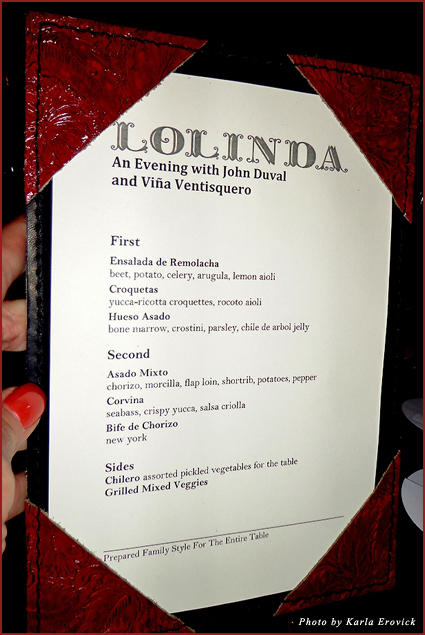 After the exhausting work of tasting and discussing each of the flights in great detail, it was time to enjoy our meal. The first course was ensalada de remolocha, containing beets, potato, celery, arugula and lemon aioli; croquetasof yucca – ricotta with rocoto aioli; and hueso asado: bone marrow, crotini, parsley, and chile de arbol jelly. 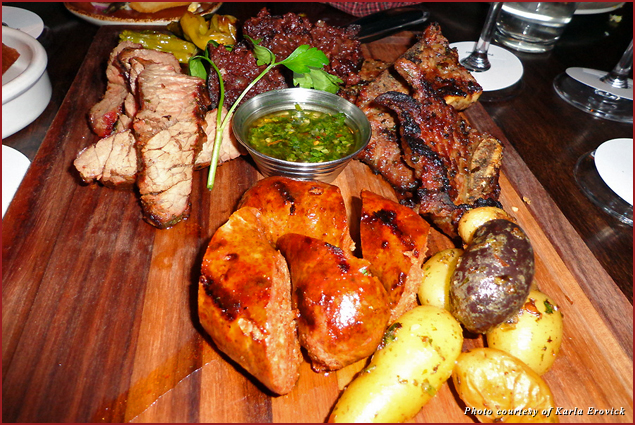 Our second course was asado mixto containing chorizo, morcilla, flap loin, shortrib, potatoes and pepper; corvina, a seabass served with crispy yucca, and salsa criolla; bife de chorizo, a New York steak; and sides of chilero, assorted pickles and grilled mixed vegetables. We were given a choice of pairing the meal with Pangea Syrah, Vertice, or both. 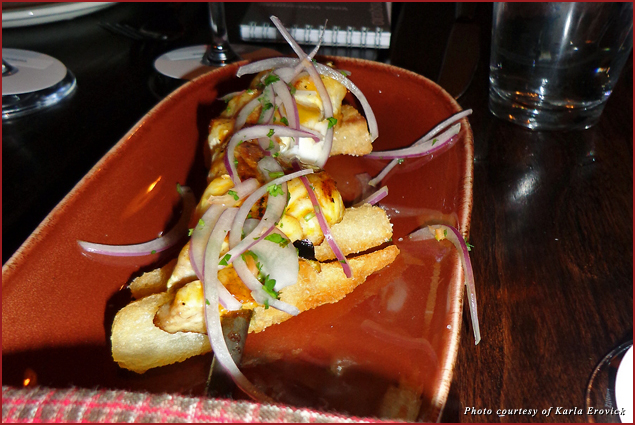 Viña Ventisquero was founded in 1998. They spend considerable time evaluating soils and the best growing regions in which to grow their estate wine. Operating in a environmentally friendly manner is also of paramount importance and they strive to be carbon neutral.

Each of their wine brands is named for Chile’s unique geography, the company name, Ventisquero, was named after the glaciers in Patagonia, Grey is named for a glacier, Queulat, a hanging glacier, Yali for wetlands, and Pangea for the single continent that once made up earth. 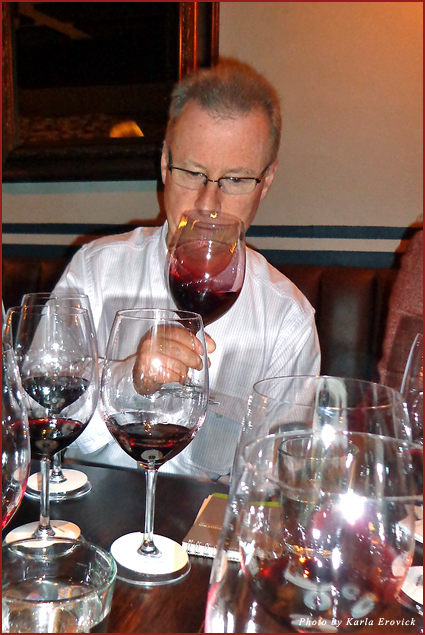 This international collaboration of Felipe Tosso of Viña Ventisquero with John Duval began with a few conversations about whether Duval might be interested in consulting to their winery.  Duval was the winemaker with Penfolds in Australia for 29 years. He left in 2003 to make wine under his own label.  The partnership between Viña Ventisquero turned out to be a good one, judging by the quality of the wine they produce. 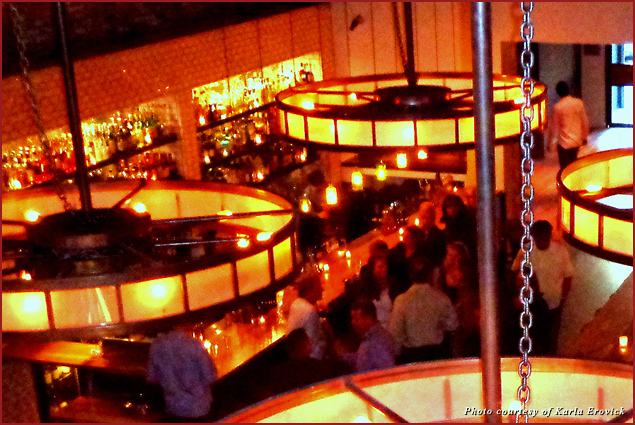