Europe in a Dollhouse: Carmel-by-the-Sea 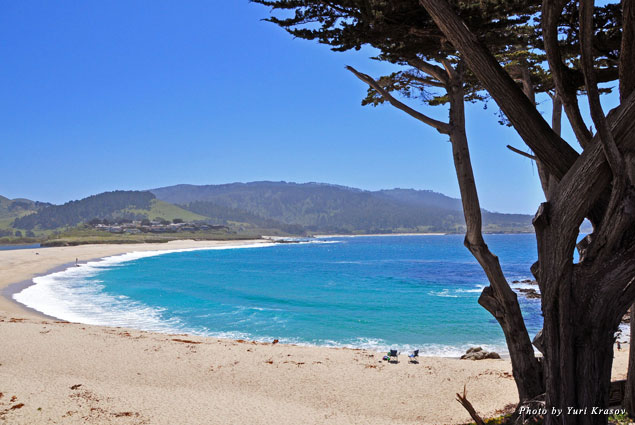 I have many nice things to say about Carmel-by-the-Sea, a coastal California town like no other. Just one square mile of the incorporated town includes a white-sand Carmel Beach and a grid of tree-lined streets with toy houses drowning in cascades of jasmine and bougainvillea. Cozy restaurants, trendy art galleries, new wine tasting rooms, and little boutique shops abound, surrounded by intricate stairways, tinkling fountains and hidden gardens.

There are no numeric addresses here. Every house has a name, and a street name and nearest corner define its whereabouts. So, what about a mailman? Oh, he is not working here delivering mail, since you can’t see any mailboxes in front of gingerbread houses. The town dwellers prefer to walk to the post office for their daily mail, as well as to the bank, to the store, or to al fresco dinner with friends. They are trying to keep their town charming, unspoiled by the conveniences of the automobile-centered lifestyle. 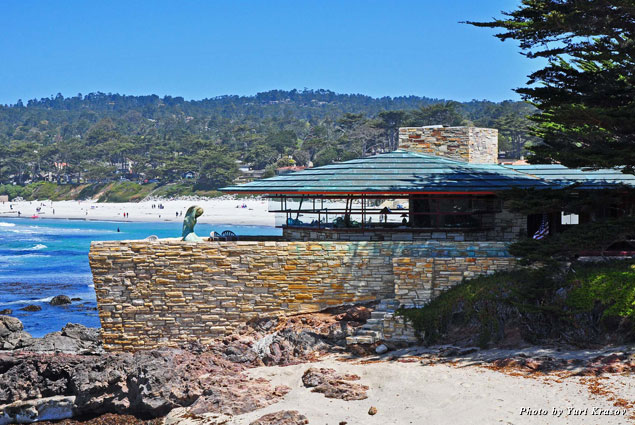 Carmel-by-the-Sea is populated and beautifully developed and maintained mostly by the descendants of European families who established here a kind of a fairy tale village in a forest, where you see more trees than buildings. There are no streetlights, no neon signs, and walking on high heels is outlawed by a city ordinance. I am not sure how it is enforced, but you won’t want to stumble around on stilts along the picturesque sidewalks burst by tree roots and wild calla lilies. It’s an ultimate romantic destination, and the most pet-friendly place, which makes people- and dog-watching here a special treat. 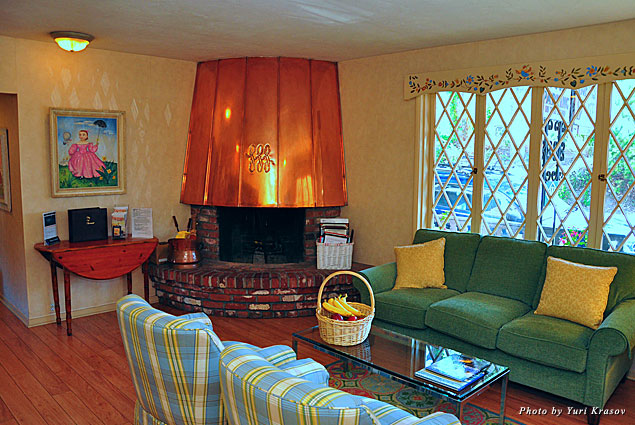 Hofsas House, where my husband and I stayed on our weekend getaway, was founded 60 years ago by Donna Hofsas, an adventurous woman of Bavarian descent. She moved to Carmel from Los Angeles with her husband in the 1940s and began a boutique inn here that grew to become a 38-room hotel, now managed by Donna’s granddaughter, Carrie Theis.

The hotel is located on a hilly street on the edge of downtown, with outside terraces overlooking a swimming pool and surrounding greenery by the ocean. Hotel guests usually take their continental breakfast included with the room stay on the terrace, basking in the sun and enjoying freshly brewed French Roast coffee, seasonal fruit, and hot-from-the-oven pastries from a local bakery. 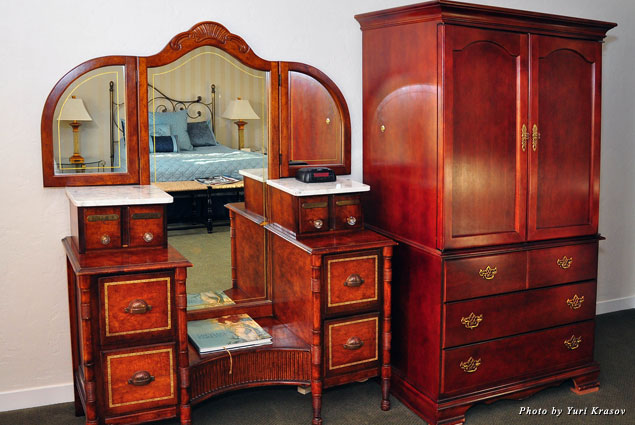 In our room, there was a kitchenette with a wet bar in a corner under a slated roof, an iron stove/fireplace, a set of antique furniture, and a luxurious bed covered with a pale-blue silk comforter, very royal and Bavarian. Multi-paned windows and a Dutch door let in plenty of sunshine. 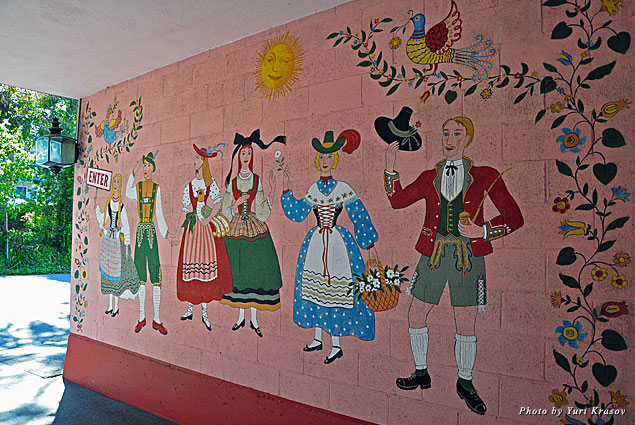 Upon the completion of the hotel building, Donna Hofsas commissioned her friend, artist Maxine Albro, to paint a Bavarian-themed welcome mural by the entrance. The artist, of Spanish descent, traveled to Mexico in her day, admired the works of Diego Rivera, and even worked side-by-side with him painting murals in San Francisco. Her most important commission was a 10-feet-by-42-feet mural at Coit Tower, depicting California agricultural life. Today, a group of smiling Bavarian shepherds and shepherdesses in white stockings greets visitors from the Hofsas House mural even before they set foot inside the lobby, decorated with framed paintings by the same artist and a unique, shiny, polished copper chimney. 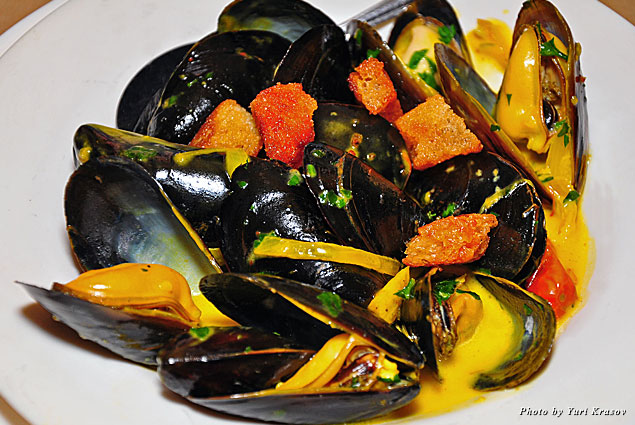 After a lazy afternoon by the pool, we walked to Mundaka restaurant for a scrumptious dinner. Mundaka serves Spanish tapas of exceptional quality and creativity. To me, they tasted even better than anything I’ve ever tried in Spain. Owner Gabe Georis says his restaurant is all about “reliving the nostalgia of being 18 and living in Spain,” but there is more to the restaurant’s success than the sweet memories of the traditional little plates originally designed to cover beer glasses from flies. Mundaka’s motto is “We believe in ‘real’ food only. YES: fresh, local, organic, biodynamic, free-range, line-caught, sustainable, fair-trade, homemade, from scratch. NO: antibiotics, hormones, pesticides, high-fructose corn syrup, artificial anything.”

Chef Brandon Miller follows this commendable commitment with an array of more or less traditional and brand-new tapas coming from the kitchen on any given evening in small batches—some not on the menu but just created from the day’s market produce.

On the night we dined, bacon-wrapped dates stuffed with goat cheese and almonds and enticingly charred were served in a baking dish with a side of fresh arugula. Duck pâté came in a tiny porcelain tureen, accompanied by pickled carrots and onions and oiled baguette toast with parsley. Plump mussels were bathed in saffron cream and topped with croutons. Chicken truffle sausage was garnished with saffron-parsnip purée. Perfectly grilled King salmon was served on a bed of black lentils with piquillo pepper sauce. Traditional croquetas contained naturally smoked pork loin, horseradish, and beet greens. 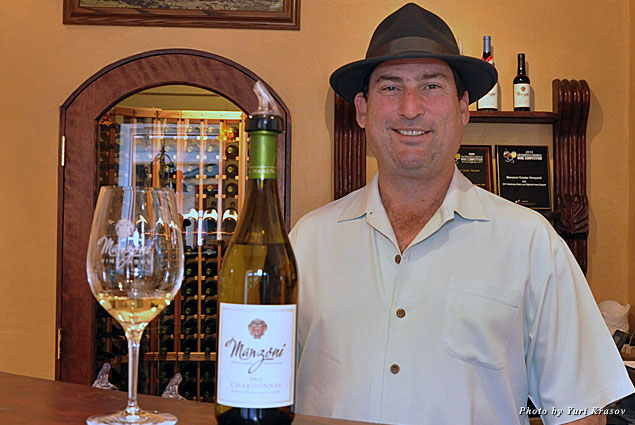 The next day, bright and early, we checked out other “European destinations”—still on foot, in a walking distance from Hofsas House, but with a passport. A Wine Walk Passport that is, issued and stamped by the Carmel Chamber of Commerce Visitor Center.

Carmel-by-the-Sea Wine Walk is a new attraction in town offering a self-guided tour of a dozen of sophisticated tasting rooms clustered around the main drag, Ocean Avenue. Since there is no need for a designated driver, I am sure some visitors manage to explore all of the participating wine spots, but we decided to randomly pick just three of them.

At Pepe Winery we indulged in a featured Atlas Peak Vineyards trio that combines Italian heritage with Napa-style winemaking: 2011 Chardonnay with slightly creamy texture and aromas of Asian pear, lemon custard, and vanilla; 2010 Erupzione (54 percent Sangiovese, 46 percent Malbec), rich and smooth with cherry and spice; and 2009 Vezuvio with blackberry and cherry flavors, a lucky blend of Cabernet Sauvignon, Syrah, Merlot, and Petit Verdot.

At Manzoni Cellars, owner Mark Manzoni treated us to 2011 Chardonnay, North Highlands’ Cuvée from the Santa Lucia Highlands, a gold medal winner at the 2013 San Francisco Chronicle Wine Competition; 2011 Pinot Noir, a great summer wine with Burgundy nuances; and other creations from the company’s Santa Lucia vineyards. A 2009 Bella Vino Port, produced only in the amount of 90 cases, swiftly transported us to Italy with its garnet-colored sweetness.

At Blair Estate, owner David Blair was pouring 2010 Blair Estate Pinot Noir, containing four clones from five-acre Delfina’s Vineyard, named after the family matriarch. We also sampled all-100 percent 2010 Cabernet Franc, 2009 Cabernet Sauvignon, and 2010 Merlot of amazing purity and quality, as well as other artisan estate-grown wines from a micro lot of the Arroyo Seco AVA.

After the most indulgent Wine Walk, we did some window shopping and gallery-gazing in downtown and ventured onto the beach, framed with wind-swept cypresses and teeming with weekend surfers, divers, sunbathers, and their free-running canine companions. 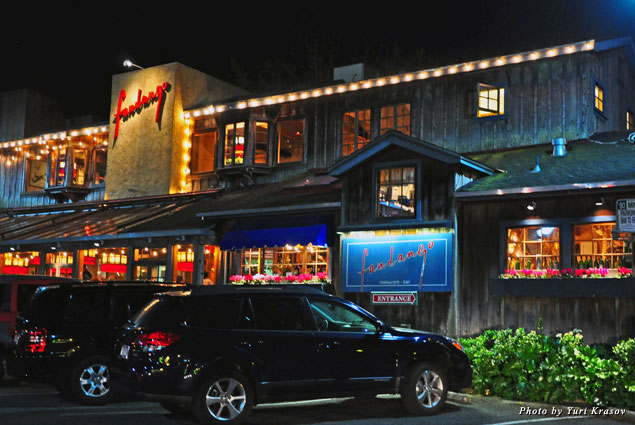 For dinner we drove to a nearby Pacific Grove, home to landmark restaurant Fandango, which has a distinct European flair. The restaurant owners, Pierre and Marietta Bain, are well known to the local public and to the tourists who make Fandango a regular stop when passing through the area. Both of them are often found on the premises, in a two-story historical building with several busy, beautifully decorated dining rooms. Chef Pedro de la Cruz has been working here for 26 years now, continuously charming the patrons with an array of French, Italian, and Spanish culinary staples.

Caprese salad is made with plump heirloom tomatoes, fresh mozzarella, and chopped basil, sprinkled with olive oil vinaigrette. The restaurant special rack of lamb is grilled to medium-rare with rosemary and spices and served with fresh mint and seasonal vegetables in Cabernet Sauvignon reduction. A glass of Hess Cabernet Sauvignon makes a great match. Osso bucco Fandango is a tender veal shank braised with veal stock and Madeira and garnished with mushrooms and tomatoes over saffron risotto. It pairs nicely with Napa Pinot noir. The restaurant is also famous for its desserts, both classic and creatively modern. 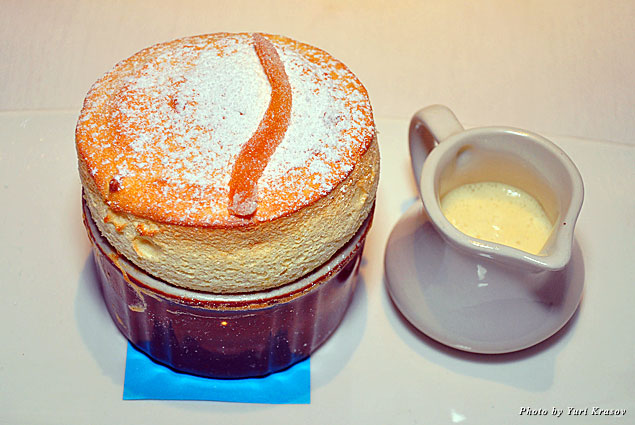 A creative sundae is served in a crystal glass on a brightly colored glass plate. It is sprinkled with caramel and chocolate nibs and surrounded by little jars with hot chocolate sauce, melted marshmallow, raspberry jam, sliced almonds, and crushed peanuts. You can add as much or as little as you wish to make you happy. Actually, just being in and around Carmel-by-the-Sea is already a happy occasion.