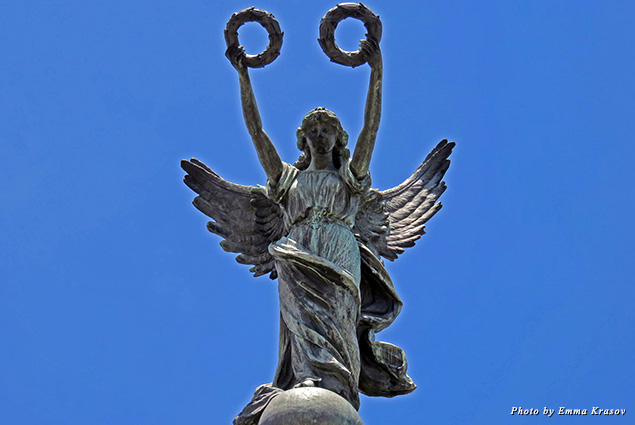 I didn’t know much about El Salvador before visiting this small yet incredibly culturally and naturally rich country. Arriving on Avianca at the Aeropuerto Internacional El Salvador after a non-crowded flight, I joined a small group of US journalists greeted by our tour guide, Moisés Flores, who spoke perfect English and was eager to share his wealth of knowledge and his love for the country we were about to explore.

In the capital city of San Salvador, we settled in at the Hotel Mirador Plaza to prepare for an informative meeting with José Napoleón Duarte Durán, the minister of tourism of El Salvador. He opened with, “Many people visit El Salvador not knowing much about it,” then quipped, “We know that Americans plan vacations at least once a year. We want them to come here at least once.” 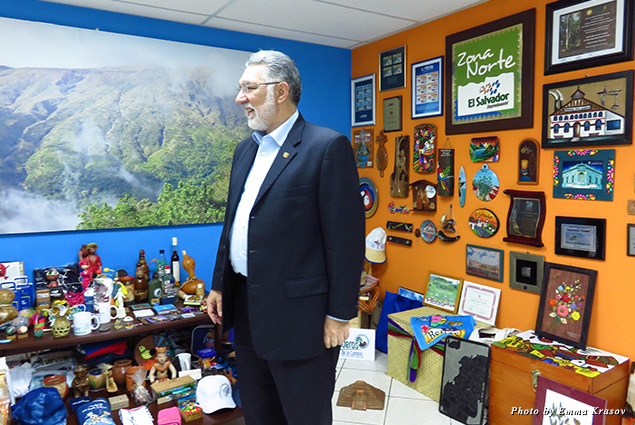 The smallest yet most densely populated country in Central America, El Salvador is positioned between Guatemala and Honduras and bordered on the southwest by the Pacific Ocean. Its natural environment is lush and beautiful, with hilly terrain, mangrove forests, active and dormant volcanoes, rivers and lakes, coconut groves, and vast plantations of bananas, coffee, cocoa, indigo, and exotic flowers.

Its population of more than six million people descends from the ancient civilizations of Olmec and Maya, and the land of the country is studded with archeological finds from around 1500 BCE. We embarked on a journey of discovery of El Salvador, a country with tragic and turbulent history and undying faith in the better future.

The Spanish rule, established in the 1520s after a bloody war, came to an end on November 5, 1811, with the first revolt against the Spanish colonizers of Central America that started in San Salvador. A monument with a winged angel holding two wreathes commemorates Primer grito de indepencia in the middle of the downtown Plaza Libertad, surrounded by El Palacio Nacional, Iglesia El Rosario, and La Catedral Metropolitana with the tomb of Monseñor Oscar Arnulfo Romero. The archbishop of San Salvador since 1977 and a renowned defender of human rights in opposition to the paramilitary government, Bishop Romero was assassinated in 1980; his death became one of the triggers of the 1980-1992 civil war that claimed 75,000 civilian lives. 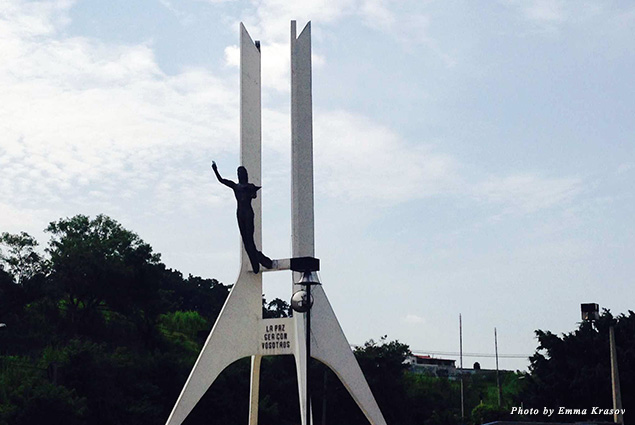 A metal figure on the La Paz monument is composed from the bullets used by the military and guerilla forces in that devastating war. Another monument along the highway leading to the capital city from the airport, Monumento al Hermano Lejano, welcomes home more than two million Salvadorans displaced by the civil war and now living in the USA, Canada, and Europe.

Breaking for lunch after our tour of the city, we sat on a terrace of Tipicos Margoth, a cafeteria-style restaurant serving typical Salvadorian dishes: pupusas (stuffed tortillas) with a side of curtido (cabbage slaw), empanadas, tamales, mashed red beans, and nearly addictive platanos (fried plantains). Pupusas are a widely recognized authentic food of El Salvador. Composed of thick handmade flour, cornmeal, or rice tortillas and stuffed with queso fresco, refried beans, chicharrón (ground pork meat) or queso con loroco (cheese and green vine flower buds), pupusas even have their own National Pupusa Day on the second Sunday in November. 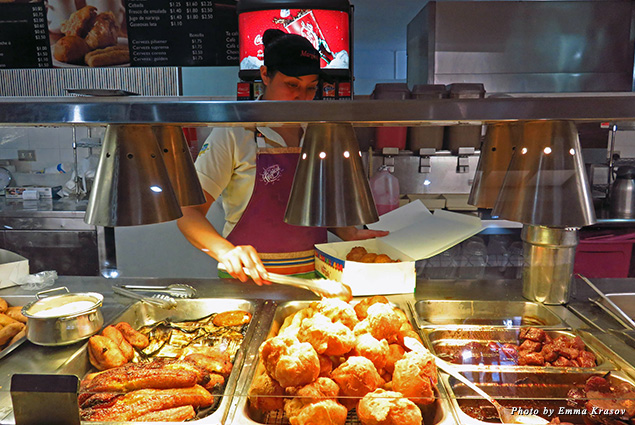 We had to consume some of these delicious carbohydrates before heading to El Boquerón Park on a slope of the San Salvador Volcano. “People sometimes ask why we build houses so close to volcanos, but there’s no other way—volcanos are everywhere,” said our guide, explaining the absence of colonial architecture in the capital city, destroyed by multiple eruptions and earthquakes since the Spanish rule.

Volcán de San Salvador (pre-Hispanic Quezaltepec) looked rather peaceful. Its entire hillside was covered with green forest. A brisk hike to a viewpoint revealed the crater: 500 meters deep, one kilometer wide, and almost perfectly round. Back in the day, the crater was filled to the brim with rainwater, and people were fishing and boating in it until the 1917 eruption evaporated the lagoon and damaged almost the entire city of San Salvador. 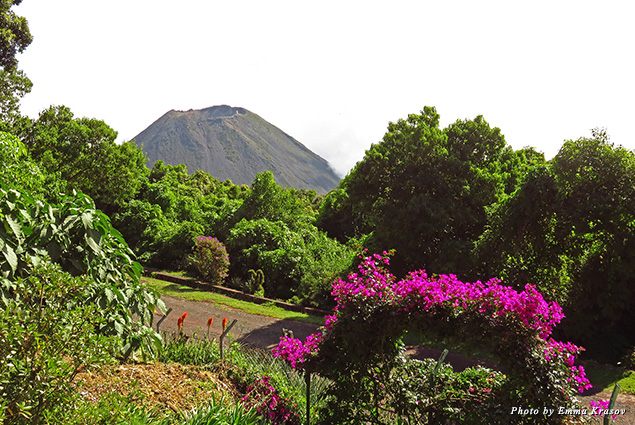 Another prominent volcano, Izalco, is the youngest (formed in 1770 on a side of the Santa Ana Volcano in the western part of the country) and is constantly erupting since its birth (its last eruption was in 1966). It was nicknamed El Faro del Pacifico (The Lighthouse of the Pacific) for its remarkable activity. Located in Parque Nacional Cerro Verde, the three volcanoes—Santa Ana, Izalco, and Cerro Verde—served as inspiration for the famous 20th century French novelist, Antoine de Saint-Exupéry, who was married to the beautiful Salvadoran female artist Consuelo Suncin and depicted her as the Rose in his popular novella, “The Little Prince.” The three volcanoes are featured on the Little Prince’s and Rose’s planet, Asteroid B-612.

Back in the 1960s, Cerro Verde Mountain Hotel was built on a hillside so the guests could watch the Izalco eruptions from their windows, but after 200 years of vigorous activity the eruptions stopped dead right then.

Rich volcanic soils are perfect for coffee crops, and we had a chance to learn all about coffee—from growing to sorting and roasting—on an engaging tour of the El Carmen Estate coffee plantation. In the nearby town of Ataco (“hot springs” in Nahuatl language), renamed by the Spaniards Concepción de Ataco, we bought the best coffee, defined by its main qualities—acidity, body, aroma, and taste—found on this fertile land. 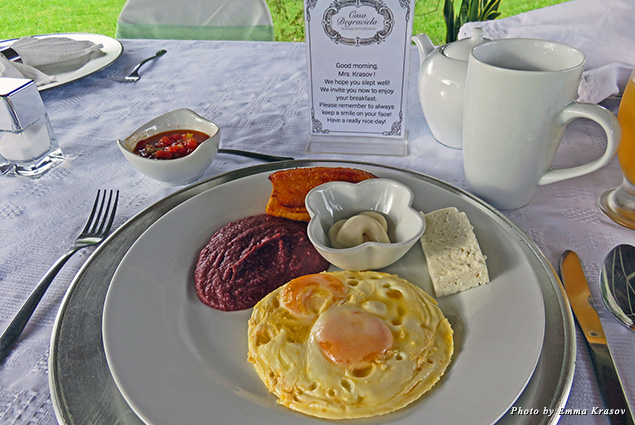 Our boutique hotel for the night, Casa Degraciela, featured neat guest rooms in an 1890 hacienda and an elegantly served breakfast of delightfully simple and nutritious Salvadoran cuisine.

In the vicinity of Santa Ana—one of the three largest cities in the country (the other two being San Salvador and San Miguel)—we visited two important archeological parks.

Tazumal in Chalchuapa, a ceremonial site with the tallest Mayan pyramid found in El Salvador (75 feet high), reveals layers of ancient architecture in a succession of pyramids built one over the other of volcanic rocks and mud. These were discovered after the outer pyramid collapsed in 2005 following a nine-day downpour in the rainy season. A huge volcanic rock engraved with depictions of an Olmec chief is also found at the complex by the entrance to Doctor Stanley H. Boggs archeological museum, which showcases artifacts from the Pipil culture and paintings depicting everyday life in pre-Hispanic era.

Parque Arqueológico Joya de Cerén in La Libertad, located halfway between San Salvador and Santa Ana, is a UNESCO World Heritage Site and is nicknamed “the Pompeii of the Americas” for the layers of volcanic ash that gradually covered an ancient village, preserving it to this day. The Loma Caldera Volcano erupted around the year 590, presumably at dinner time, mercifully sending out the warning of tremors and rumbles and letting the villages escape with their lives. The village was buried under 14 layers of ash. No human bodies were found in the 1976 discovery of the site, but plenty of people’s belongings were; utensils, furniture, and even half-eaten food in ceramic bowls are now displayed at the on-site museum. 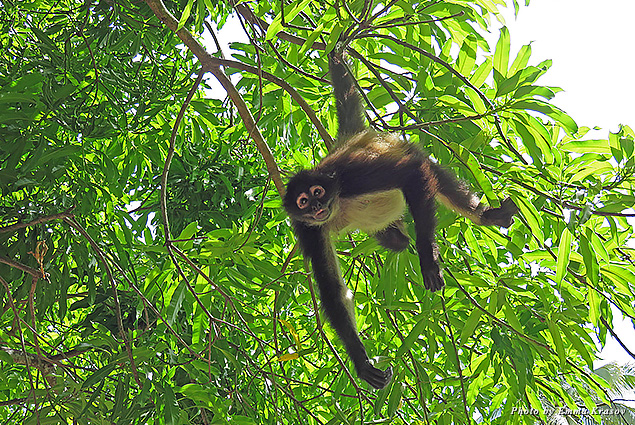 From the mountains to the sea, we made our way through the sugarcane and banana plantations to the Bahia de Jiquilisco in the southeastern part of El Salvador. Here, a large biosphere reserve contains the largest mangrove forest in the country, the biggest costal estuary, and a network of islands and canals accessible for fishing and other water activities. Puerto Barillas Marina & Lodge, where we settled for the night, organizes a series of enticing educational tours for its guests on a regular basis.

Tour a Finca de Cacao offers a visit to the largest cocoa plantation in Central America, San Jose Real de La Carrera, where guests can see how the cocoa pods grow on trees, how they are peeled to reveal white fruity insides surrounding the precious beans, and how the beans are dried in the open air before being peeled and processed into luscious dark chocolate tablets used for hot drinks and confections.

Tour al Santuario de Monos takes guests to the spider monkey sanctuary, where the endangered little animals, who like to eat bananas while hanging from a tree by their tails, live in their natural habitat.

Capturar y Liberar Tortugas Marinas is a rodeo capture tour on a boat. Black turtles and hawksbills are captured, studied in the boat, and then released. On this tour, international volunteers from Iniciativa Carey del Pacifico Oriental (ICAPO), an organization that works on recovery of severely endangered hawksbill turtles in the Eastern Pacific, accompanied us. Two turtles delivered to our boat were measured with a flexible tape and tagged for further tracing. 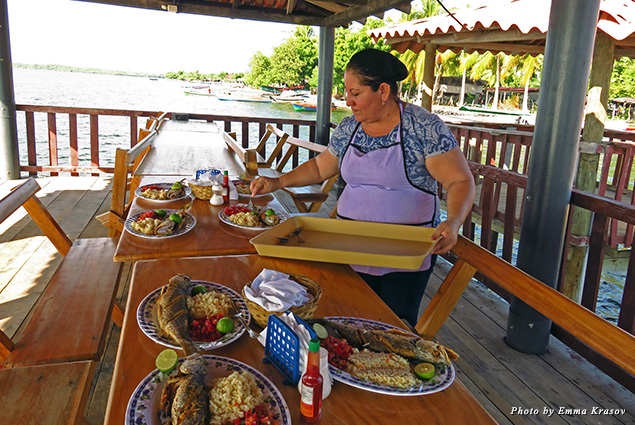 Our boat stopped by one of the picturesque islands, La Pirraya, which has a thriving fishermen community living off the sea and welcoming tourists for a catch-of-the-day lunch on the water—and maybe a swim in the temperate bay.

For a hands-on activity in the country of many crafts, we had an indigo workshop on a Los Nacimientos plantation owned and operated by Rhina Rehman, a strikingly young-looking woman of 70 who said she had to live to be 100 years old to fulfill all her business plans.

Indigo is a native plant known to the Maya, who used the beautiful blue dye for their clay pottery and early fabrics. Before the Spanish invasion, Amerindians wore indigo-dyed clothes. With the invention of artificial dyes in the mid-19th century, the indigo production subsided, but the world-famous Levy Strauss jeans were still dyed with Salvadoran indigo. 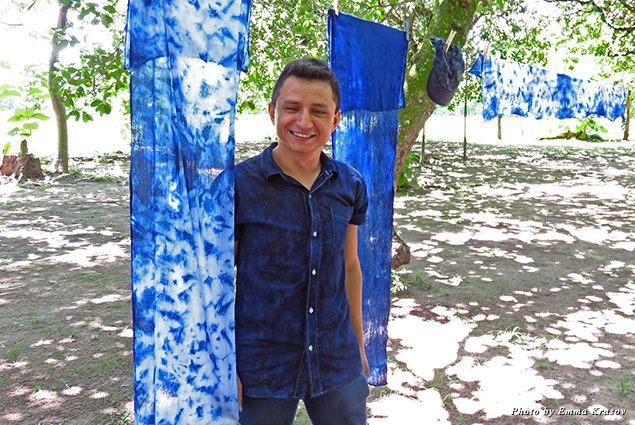 The blue dye comes from the leaves of an indigo plant fermented in water. At Los Nacimientos, 1600 pounds of leaves ferment for 16 hours in a 600-gallon cement tank. The liquid is transported to the next tank for 21-hour sedimentation, followed by a thorough filtration process. Then the sediment is heat up to a certain degree and dried in the sun in metal trays for up to 10 days. The resulting powder amounts to up to about two kilograms and is ready to use.

More pupusas were consumed on our way to the coastal city of La Libertad, which has a renovated shoreline, open-air restaurants, and a spectacular fish market on a long pier.

Then there was Suchitoto, a quaint and clean little historic town in the very heart of El Salvador. Meaning a “flower bird” in the Nahuatl language, Suchitoto is located in the northern part of the country on the banks of the dreamy Lago Suchitlán. This beautiful colonial town, declared the cultural capital of El Salvador for its bustling arts and crafts scene, welcomed us with the kindness of its inhabitants. We tried some cheese and loroco pupusas prepared on a stove outside Portal el Buen Sabor restaurant, did some souvenir shopping at the many craft boutiques around the main square, and walked in a park with a fountain where the locals were sitting on benches talking, reading books, or rocking baby strollers.

We spent the night at the artfully decorated Hotel Los Almendros de San Lorenzo, owned and operated by a couple of distinguished gentlemen, Pascal Lebailly and Joaquin Rodezno. (The latter was formerly the Ambassador of El Salvador in Belgium.)

Did we feel safe traveling El Salvador? Oh yes, we did. Two brave officers of the government tourist police Politur accompanied our van throughout the entire trip (not that we ever were in any danger). The 400 members of Policia de Turismo are educated in English, first aid, and 19 tourist routes implemented by the Ministry of Tourism to promote the history and culture of El Salvador. Among the Rutas Turisticas that crisscross the entire country are Ruta Arqueológica, Ruta Artesanal, Ruta Sol y Playa, Ruta de La Paz, Ruta Boquerón, Ruta Nahuat Pipil, and Ruta de las Flores.