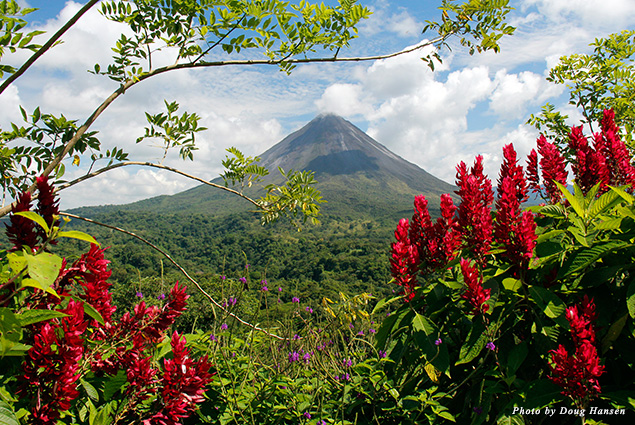 “Pura vida!” we all shouted in unison as we lifted our paddles victoriously into the air after smashing through another rapid on Costa Rica’s renowned Pacuare River. The shout meant “pure life” and that’s exactly what a weeklong visit to Costa Rica provided in abundance. 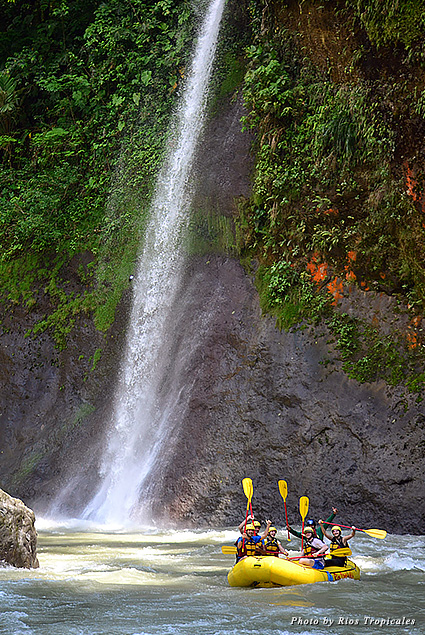 Over the years I had heard such consistently rave reviews about Costa Rica that I had to see for myself how such a small country could produce such big accolades. After joining Rios Tropicales for a six-day eco-adventure tour, here’s what I found out: Costa Rica rocks! It was one of the most enjoyable trips I’ve done in years.

The four members of our tour met at the Hotel Grano de Oro, a beautiful boutique hotel in the middle of the capital, San Jose. We embarked early the next morning with great anticipation for the adventures to come. 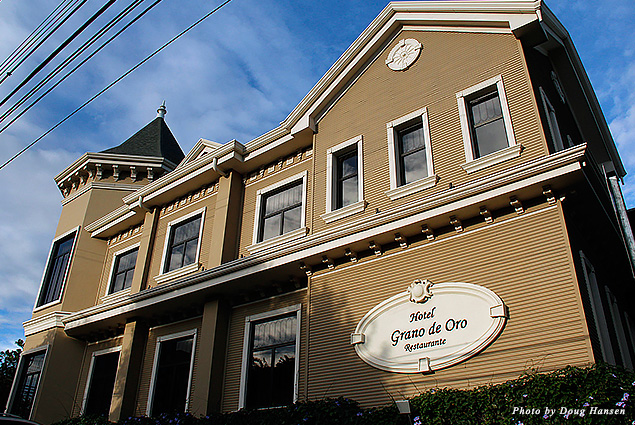 Costa Rica didn’t wait long to show off its first attraction. Not far from the capital the newly active volcano, Turrialba, loomed above the low-hanging clouds and belched a gray-white plume of smoke high into the sky. As we passed large banana plantations, ranches, and small towns, I appreciated the lack of litter, the decent roads, and the bumper stickers that reflected Costa Rica’s remarkable commitment to sustainability: “Protect our trees and wildlife.” 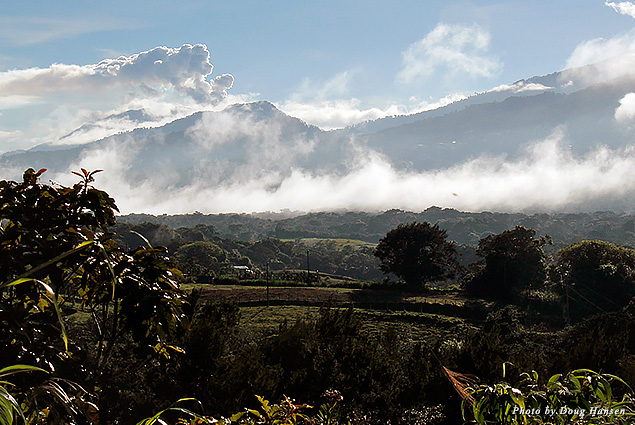 We stopped at a pleasant restaurant, where we devoured what proved to be a typical Costa Rican breakfast: rice, black beans, eggs, fried bananas, succulent fresh fruit (watermelon, cantaloupe, and the sweetest pineapple), coffee, and juice. A couple of hours later, we reached our destination, a riverside dock lined with elongated motorboats that ferried tourists to and from Tortuguero National Park, a necessity since it can only be reached by boat or plane. We eagerly donned our lifejackets, grabbed our paddles, and set forth in our bright yellow kayaks.

Kayaking through a tropical forest for three hours proved to be a remarkably enjoyable experience. As the motorboats careened past us, we languidly paddled along our jungle-rimmed river, pausing to observe the occasional toucans, parrots, monkeys, lizards, and various water birds. 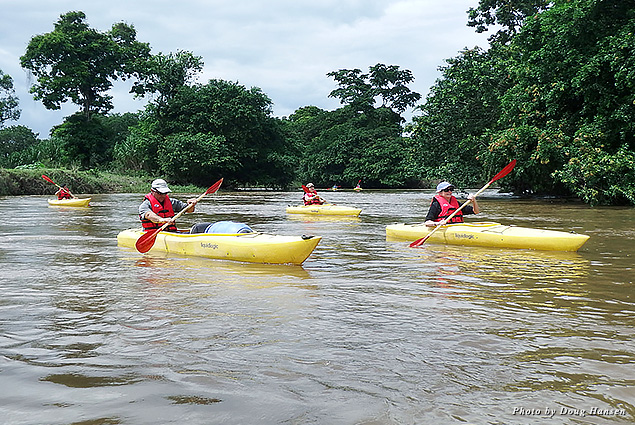 Shortly after our cozy tributary river merged with a much larger river, we boarded a motorized boat to complete our journey to Mawamba Lodge, tucked between the river and the Caribbean Sea. There were no other habitations nearby except for the small town of Tortuguero about a mile away. Our rooms were modest but tidy, with handcrafted rocking chairs and hammocks beckoning us to relax on the porch. 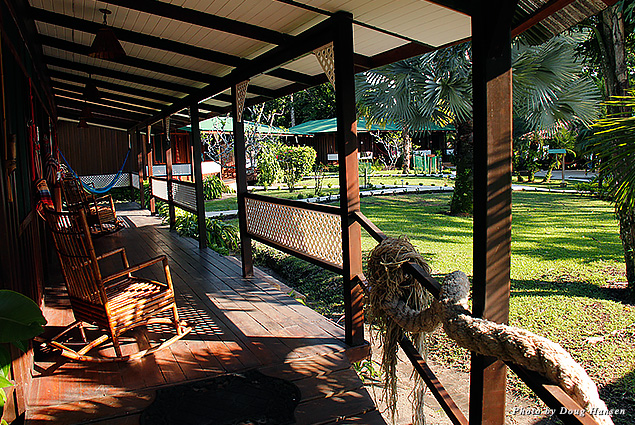 Early the next morning a small motorboat took us on a unique nature tour through a network of canals that crisscrossed Tortuguero National Park. Thankfully, our sharp-eyed guides helped us spot exotic aquatic birds, spider monkeys, and a modest-sized crocodile lounging among the floating plants. 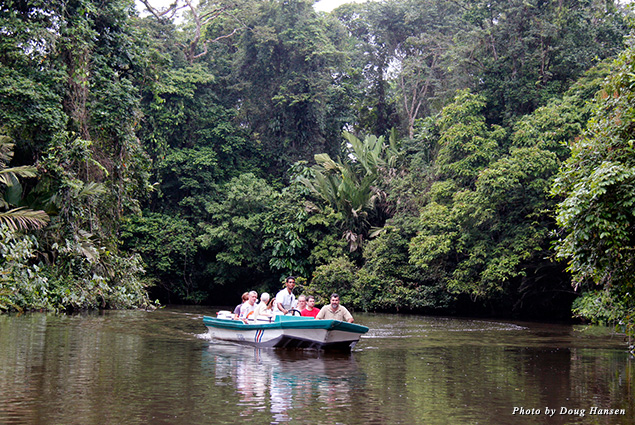 We were sorry to leave Mawamba Lodge so soon, but we looked forward to our next adventure: two days of whitewater rafting. Our van dropped us off at the top of a rutted dirt road, where a waiting tractor and trailer bumped us down to the river.

“The Pacuare River is one of the top five rafting rivers in the world,” explained our affable guide, Andres. “Today, we go seven miles with class two and three rapids, but the day after tomorrow we’ll have fourteen miles of class three and four rapids.”

Ignoring the light rainfall, we put on our helmets and life jackets and climbed into the large, yellow inflatable rafts. At first I gripped the side of the raft tenaciously as we entered the fast-flowing, muddy river and crashed through surging waves, bounced off boulders, and spun around in boiling eddies. Soon I relaxed and started whooping in delight along with the others as bucket-loads of water sprayed across our faces. Each time we passed through a nasty-looking rapid, we triumphantly raised our paddles high in the air and shouted the mantra for our whole trip, “Pura vida!” 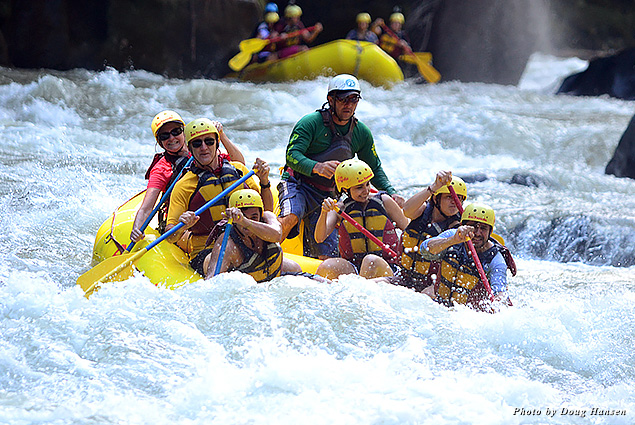 The fast-flowing river propelled us to our next stop, Rios Tropicales Lodge. It was a magical place located in the middle of the jungle, perched on a jungle-clad mountainside overlooking the rushing river below. In addition, the lodge demonstrated its green commitment by producing electricity from a small, hydro-powered generator and by recycling everything. My modest room had a comfy king-sized bed, a private bathroom and shower (with occasional warm water), and an inviting hammock on the balcony. In the evening, we sat on the covered veranda enjoying our happy hour piña coladas and a delicious meal before heading off to bed, falling asleep to the soothing sounds of the rushing water below and an occasional chirping noise from the forest above. 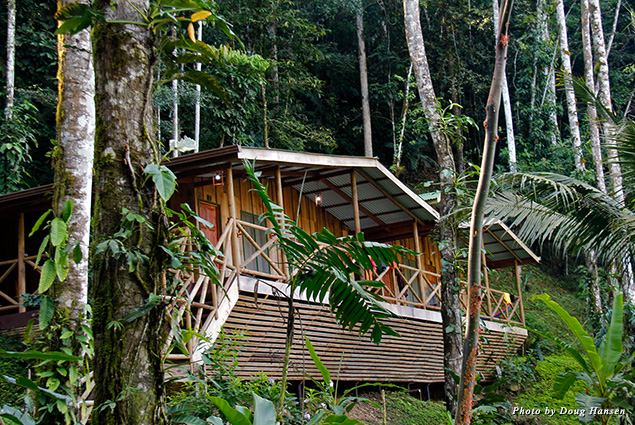 The next morning dawned clear and sunny, so I hurriedly dressed and bounded across the river for a pre-breakfast exploration of the rainforest. I felt awed by my surroundings, sensing that I was in a sacred place, my Cathedral of Nature. What struck me most was the incredible variety of plants whose shapes, sizes, colors, and textures defied imagination. The silence was only occasionally broken by a bird’s melodious song, a cicada’s harsh buzzing, or the distinctive whooping of a howler monkey. 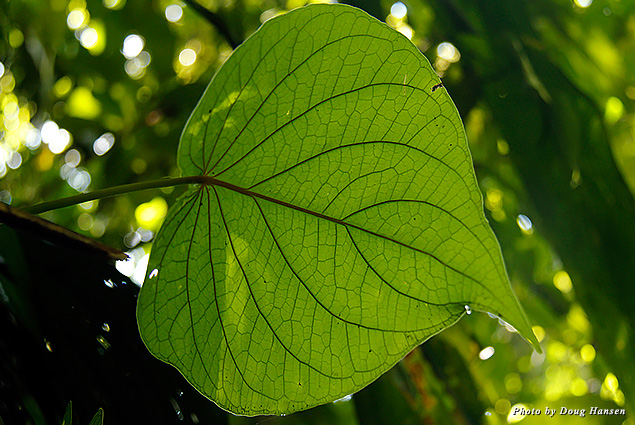 I returned to the lodge for breakfast, after which we set out on a day filled with adventures. We first crossed the river “native-style”—in a metal basket that rolled along a steel cable. Once across, we walked up a dirt road to find a team of saddled horses waiting to carry us up into the mountains.

The sunny weather and well-mannered horses combined to make this a special experience, but when we arrived at the summit I received my greatest Costa Rican gift: Our lunch destination was a tropical butterfly farm! The friendly owner, Mario, greeted us and led us around his mountaintop farm, proudly showing off his dazzling brood of tropical butterflies. While eating lunch on his large patio, we relished the breathtaking expanse of mountains, forests, and the river far below. 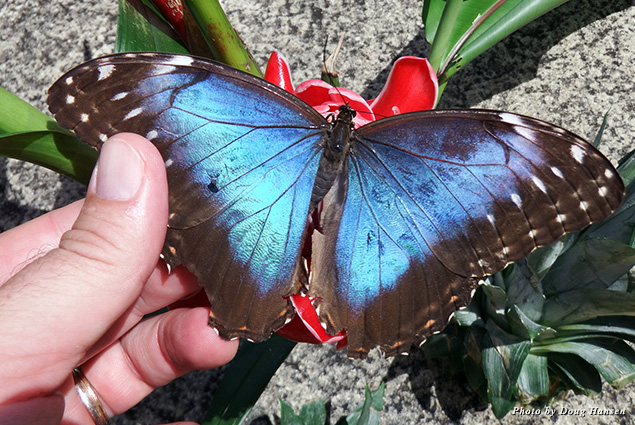 The day culminated with a long hike down the mountain on a rainforest trail that led back to our lodge, followed by a lesson in rappelling down a 30-foot waterfall. After happy hour and a pleasant dinner, we headed to bed early, feeling tired but elated.

The next morning we glided through the rainforest on zip lines stretched across the hillside before embarking on our final day of river rafting. With names like “Upper and Lower Graves,” the class four rapids sounded rather intimidating, but fear turned into fun as we careened through the wild waters. In the rare smooth stretches we jumped into the river and floated until the next rapids appeared. When our magical journey at last came to an end, we took solace in knowing we had one more adventure awaiting us. 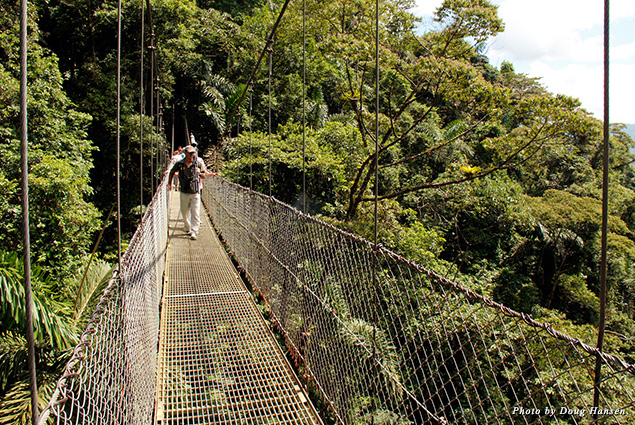 We drove through the evening to a pleasant town, La Fortuna, where we indulged in the theme-park-like Baldi Hot Springs before heading in the darkness to the cottages of Lomas del Volcán hotel. The next morning, I literally gasped as I looked out my window and beheld the most stunning mountain (volcano) I’d ever seen—Arenal—whose perfectly shaped cone rose nearly 5,500 feet from the otherwise flat ground. Endless photographs later, we ate breakfast in the hotel’s delightful open-air restaurant (great buffet!) and headed for our final outing, a tour of the Arenal Hanging Bridges nature preserve. A local Arenal expert, Freddie, led us across a series of trails and treetop-level suspension bridges while he brilliantly explained the area’s natural history and helped us observe creatures and plants we would have never found on our own.

This outstanding tour capped off an unforgettable week of eco-adventures in Costa Rica. Add me to the long list of Costa Rica fans. My advice: Go there soon and savor your own “Pura Vida.”