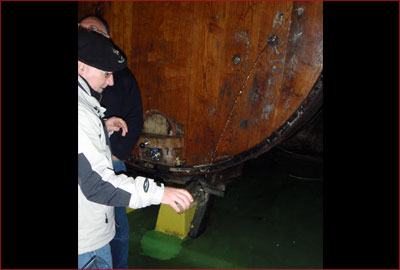 Nestled in the northwest coastal area of Spain sits the Basque Country, and within it, rolling hills dotted with farmhouses, sheep roaming grassy fields and waves crashing against rocky mountains.

With a diverse landscape, it is no surprise that the Basques also have a wide array of delectable food. There are world-renowned restaurants and famous pintxos from the bar, but a more local and country-like food that not everyone knows about in this little food heaven is the Basque cider house. Called sargardotegia in Basque, the word comes from sagar (apple), ardo (wine) and tegi (place where something takes place). So, all together sargardotegia can be roughly translated to -place where apple wine happens.

Each sargardotegia houses delicious Basque cider which has been part of this culture for years and years. In fact, the Basques’ fondness for apples shows up in documents all the way from the 11th century. The King of Navarre in that century mentions sending an envoy to the Basque region and mentions apples and cider-making.

A pilgrim’s 1134 diary also mentions the Basques’ talent for apple growing and cider-making. An inquisitor in the 17th century coined the ‘land of the apple’ for the Basque Country, and various books mention the Basque fishermen’s preference of cider to water while on long whale-hunting trips.

History books tell us that the vast apple orchards used to be picked by the entire community. This way, even if you didn’t have an apple press, you were guaranteed some of the delicious drink. Nowadays, apples are picked with a long tool that has a nail-like point. Traditionally, the apples were brought to a two-story farm house and pressed on the top floor with a quite-advanced contraption at the time, which pressed all the juice out of the apples and caught the liquid. On the bottom floor, it was bottled in large barrels to ferment.

Now though, machines do the heavy work. But the process after the smashing is still the same – the liquid goes into a huge barrels (think about 250 gallons) of oak or chestnut for a fermenting process to

1) turn the natural sugar to alcohol and|
2) to get rid of the sour taste of the apples.

Apple-picking goes on during the months of September, October, and November and finally, on the 19th of January, the sargardotegias open their doors and let all the cider fans in for the officially opening day of cider season.

Most sargardotegias have a large dining room where you normally eat standing up, and a ‘kupela,’ or barrel room. Originally sargardotegias were just for testing the cider – when you left, you would buy bottles of the cider from the barrels you liked most. Nowadays, it is a dinner and social event, but still with the old-time drinking right from the cider barrel.

The meal always starts off with little pieces of txorizo – a sausage – along with some bread. Next comes a juicy cod omelet. Out of the kitchen next is more cod, but this time served with tasty green peppers. If you can handle more eating, the next course is always a txuleta – a huge steak that is practically still bleeding but oh-so-good. Last but definitely not least is the dessert – Idiazabal cheese (a Basque sheep cheese that is very strong) with membrillo (a quince jelly that you cut in pieces and put on top of your cheese slices) and some nuts (that you have to crack yourself – either with your hand or the table).

This very-filling meal is punctuated with many trips to the kupela to fill up your glass of cider. The trick is that you never actually fill up the glass – instead you catch about two or three drinks worth of cider in your cup, drink them in the kupela room, and then go back for more eating and talking. This is where the ‘standing up eating’ comes in handy because you are always free to go to drink!

The cider-drinking tradition lost a bit of speed when Navarre upped their production of wine. And cider was practically dead during the Spanish Civil War, when most people abandoned their orchards, but since the invention of Sargardo Egun (Cider Day) in 1981, cider has made a huge comeback.

This still cider (not sparkling) is mostly made in Gipuzkoa, and more than 9.5 million liters are produced annually (about 2.5 million gallons). Only 10 percent of that is drunk in sargardotegias. The rest is bottled and bought in stores to enjoy at home.

The two most important words of any Basque cider night are: txotx (pronounced choch) which is the cider-maker’s call that he is opening a barrel and to come and fill up your glass; and topa (pronounced toe-pa) which is the Basque way of saying cheers! A personal favorite is azkena which means ‘last one,’ and comes into play late in the evening. It is so delicious you just have to say ‘one more, one more!’