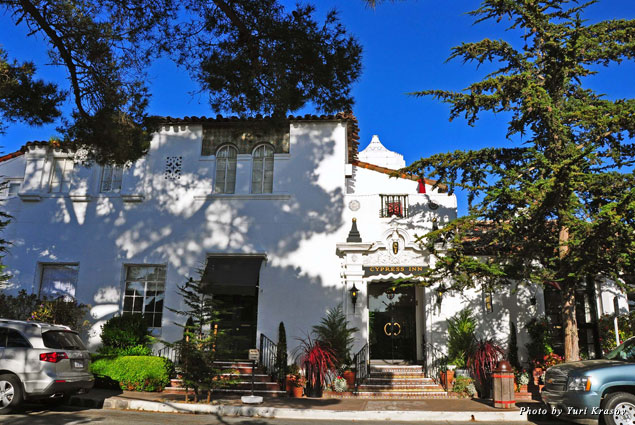 Small, serene, and sophisticated Cypress Inn in gorgeous California toy town Carmel-by-the-Sea welcomes visitors with dogs. All kinds of dogs—big and little, Airedale terriers and Boston terriers, hounds and pinschers, those carried in doll blankets and those dragging human companions by a leash. Well-dressed dogs can be seen eating and drinking from their plates under peoples’ tables in a tree-lined courtyard or in a lounge area, and they seem to be on their best behavior most of the time. The dog’s life idiom has lost its original meaning here a while ago…. 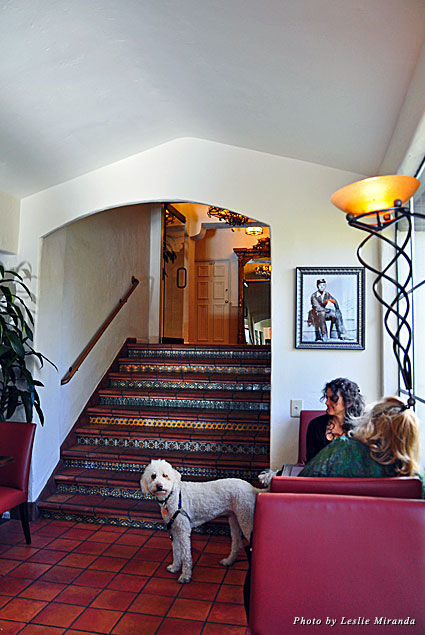 The hotel administration believes in the importance of family pets and their right to accompany people on vacation so, if you follow some common courtesy rules, your dog, cat, cockatoo, or iguana can luxuriate next to you in this blessed and very comfortable place.

Opened in 1929, and maintaining the glamour epoch appeal, Cypress Inn has been jointly owned by Doris Day and Dennis LeVett for the last couple decades. Doris Day, a Hollywood movie star of the “Mad Men” era, a hit singer, and a prominent animal rights advocate, celebrated her 91st birthday this spring. 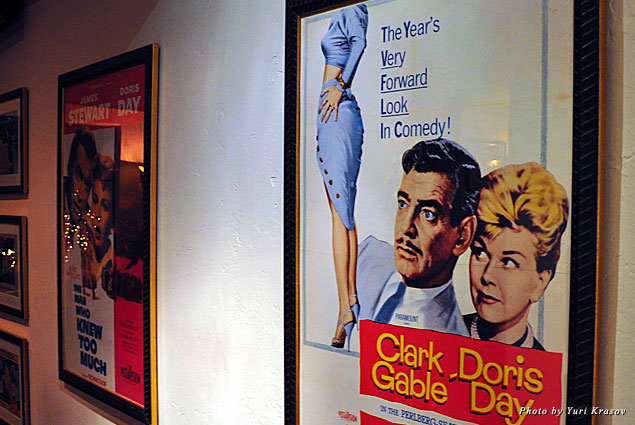 A blonde and blue-eyed beauty with an enviable figure, a pearly smile, and a sparkling personality, Doris Day became known as a radio singer even before she turned 18. Later on, she made 39 movies in 20 years of her 60-year-long career. This fact alone makes her the most popular female movie actress of all time. Understandably, the hallways of the inn are decorated with Doris Day paraphernalia: movie posters, personal mementos, and sheet music from her famous albums recorded between 1956 and 1968.

The hotel restaurant, Terry’s Restaurant & Lounge is named after Doris Day’s only son, the late Terry Melcher, a musician and record producer who also co-wrote a script of his mother’s hilarious masterpiece of a film, “Move Over, Darling!”

All in all, Cypress Inn has a feel of an old family home, warm and hospitable, built to last, and decorated in a Spanish-Moroccan style with its white walls, tile roof, intricate tower, dark wood beams, and colorful glazed tiles lining the stair risers. 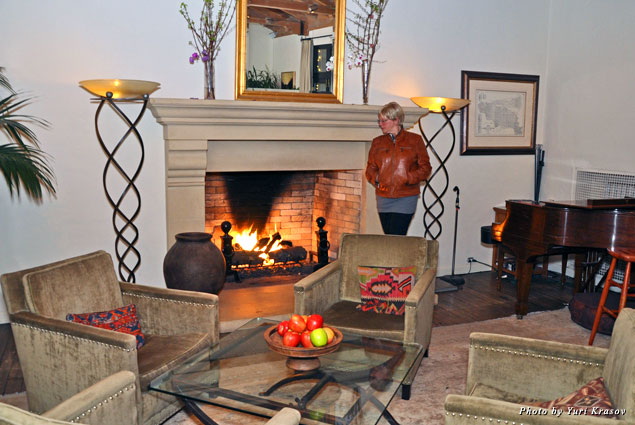 In the living room/library, the floor is covered with a well-worn Persian rug. Plush armchairs by the fireplace, wooden magazine stands, low coffee tables, banquettes, and a royal piano in a corner seem to have been around since the inn’s opening, providing a perfect backdrop for the signature afternoon tea. Or you can take your tea outside to the cozy patio with its own fireplace—thankfully, weather permitting, most of the time. 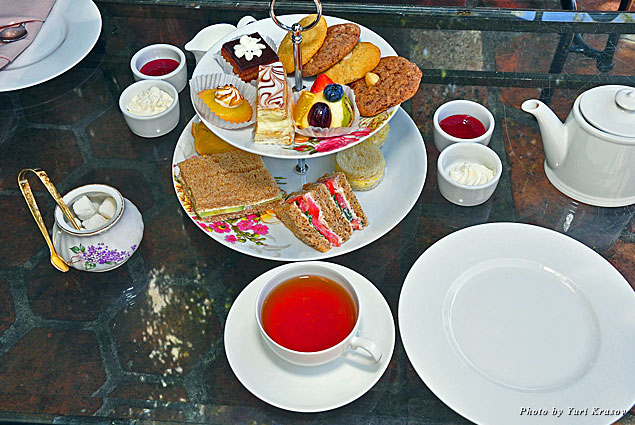 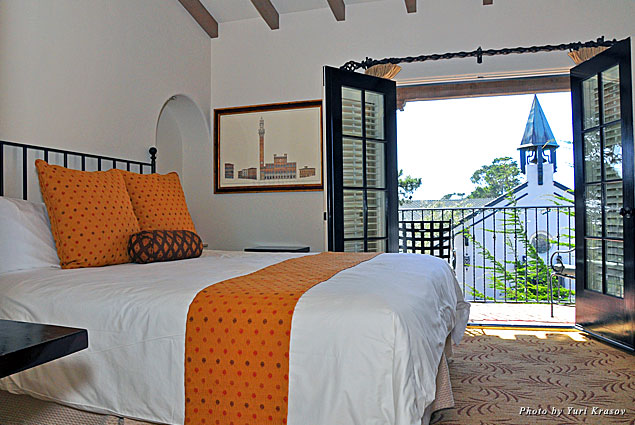 Cypress Inn guest rooms combine a period atmosphere (antique furniture, art, décor) with excellent modern conveniences. A plate of fruit and nuts and a crystal decanter of cream sherry in every room delight a tired traveler, as does a view from a balcony overlooking the shady street.

In the restaurant, with its heavy carved door, Moroccan glass lanterns over the bar, and a television screen looping Doris Day’s movies, the inn guests mingle with the locals who come for dinner and creative cocktails, named after the star’s colleagues and friends. 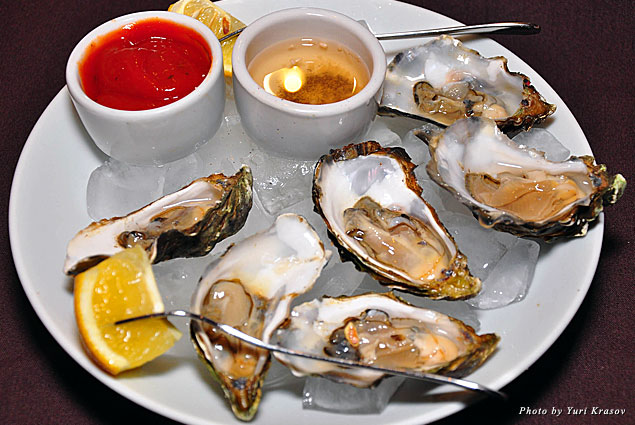 On the menu, there are many seafood choices, which are sustainably caught in accordance with the Monterey Bay Aquarium Seafood Watch Program. Fresh oysters are served with lemon shallot mignonette and horseradish sauce, and local Dungeness crab salad is bursting with flavors of mango, red bell pepper, basil, mint, and saffron aioli. Traditional tried-and-true main courses include shrimp scampi with fresh linguini and fork-tender braised short ribs with red wine reduction. Desserts are also traditional, such as chocolate lava cake with vanilla bean gelato and Cabernet reduction sauce or coconut crème-brûlée with fresh berries and biscotti, and you can’t go wrong with any of them. The wine list includes some great local finds, including Carmel Valley Pinot Noir.

Open windows, friendly dog sounds from the patio, human laughter, and vivid conversations at the bar make dining at Terry’s a rather festive affair. 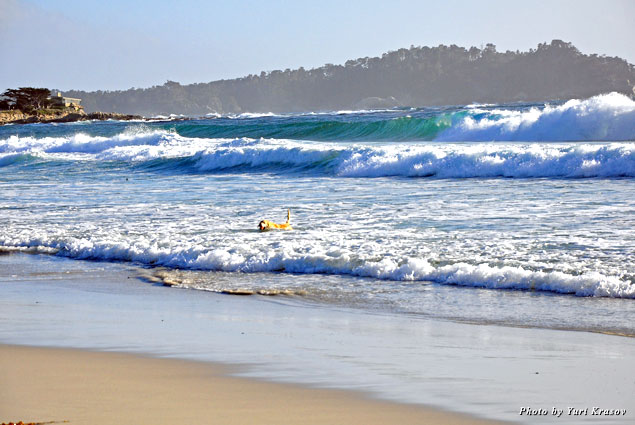 A short walk from the inn is beautiful, white-sand Carmel Beach—wide and long, and the only one in the nation where man’s best friends can run and play off-leash. And so they do; dogs of all breeds run into the water or after each other, play, fetch, entertain children, and make a spectacle that never gets old. 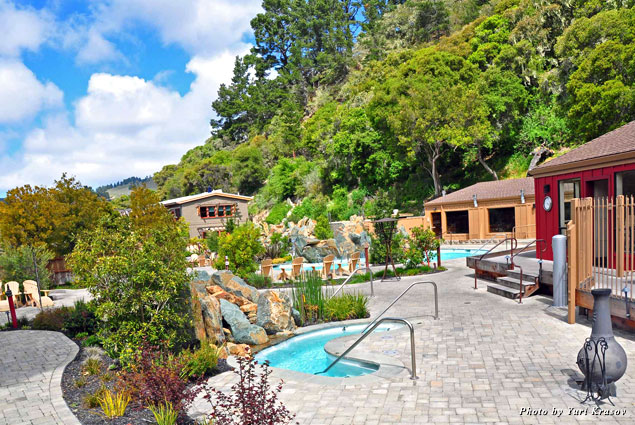 If you are seeking a quieter environment, a few minutes’ drive from the inn will take you to Refuge spa, which brands itself as an alfresco hydrotherapy sanctuary. And it’s a true sanctuary; while sitting in a hot or icy pool under a waterfall or lounging in an Adirondack chair by a fire pit and staring at the green redwood tops piercing white clouds in the blue sky you feel like performing a cleansing ritual in a temple of Mother Nature. It is easy to spend all day here, repeating the recommended cycle of hot tubs, icy pools, warm-ups, and cool-downs, but if you have only a weekend to spare, there are several other sites you wouldn’t want to miss.

Mission San Carlos Borromeo de Carmelo, founded in 1771, has a Basilica church designated as a National Historic Landmark; a lush garden with a fountain, the shrine of Father Junipero Serra; and a well-appointed museum.

The largest local attraction is the wild and endlessly fascinating Point Lobos State Reserve, a crown jewel of the California State Parks. On its vast territory overlooking the Pacific, 250 kinds of sea and land animals and 300 species of plants find their safe haven. Sea lions, California gray whales, and sea otters can be seen from the many trails of the park. A live cypress grove stands like a wind-formed sculpture garden from the ancient times. It’s no wonder painters and photographers frequent Point Lobos. You can see more of them and join their ranks on a California poppy-lined trail overlooking a magically colored China Cove. It’s an unforgettable experience.

Twenty-Four Hours in Carmel A Different Side of Monterey County