Discover the Secrets of Beautiful Belize 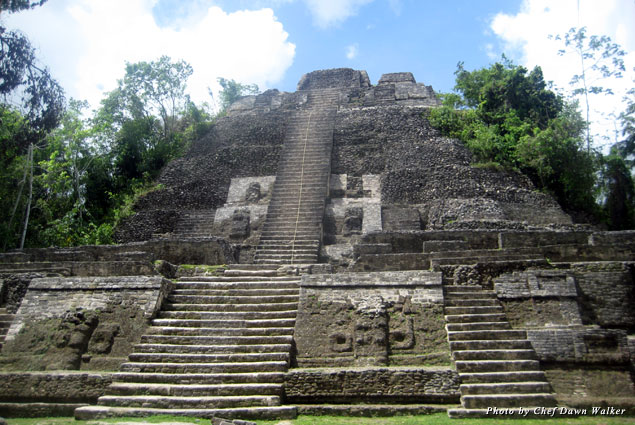 Belize, a country of approximately 311,000 people, rests on the eastern coast of Central America. Northeast of Guatemala and south of Mexico, only 185 miles long and 75 miles wide, and formerly known as British Honduras, Belize gained its independence from Britain in 1981, making it the only English-speaking country in all of Central America. Offering a subtropical climate with brisk, prevailing trade winds from the Caribbean and an average temperature of 80 degrees Fahrenheit, Belize has two seasons: the dry season from December to May and the green or rainy season from June to November. The capital, Belmopan, is in the Cayo District, just one of seven districts in the country. 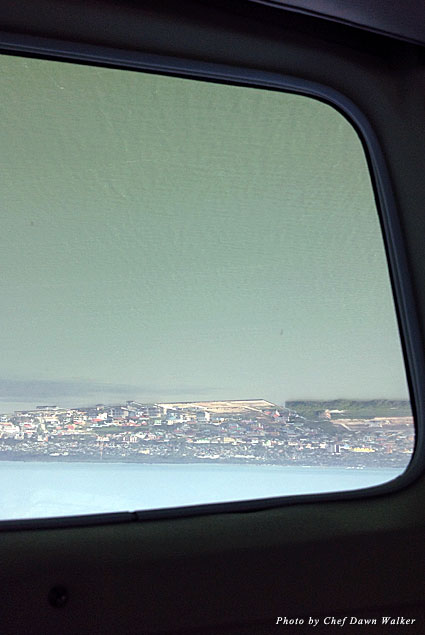 I landed in Belize City, the former capital, and took a taxi to the water taxi port and a boat to San Pedro, a town on Ambergris Caye, pronounced “key.” This 25-square-mile island is the largest island in Belize and features dining, shopping, nightlife, and accommodations including budget-friendly and luxury resorts. I had the pleasure of staying at Xanadu Island Resort, which offers eco-friendly accommodations containing monolithic domes (made of fireproof, soundproof, hurricane proof, and steel-reinforced concrete) combined with thatched roofs. The grounds are gorgeous, overlooking a private pool and beachfront. The nature reserve on the property features an elevated walking path that affords visitors up-close views of native birds and wildlife. 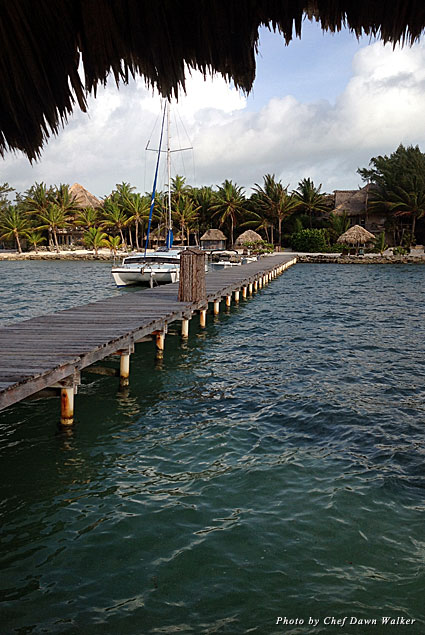 Xanadu offers a range of sleeping options, from studios to three-room suites, all of which are air conditioned and equipped with a full kitchen, a living/dining area, ceiling fans, cable television, phones, Wi-Fi, an iPod docking station, a private safe, and a hair dryer. What impressed me most was the service. Most of the employees were native Belizeans, many of who have been with the resort for years or since it was built in 1998. There are two grocery stores directly outside the property, and the downtown area is within walking distance.

As far as playing goes, the best bet is to either head to Ramon’s Village Resort or hook up with Gerson from Amigos Jungle Tours. On my first full day in Belize, I took the Lamanai Jungle River Adventure, which included taking a boat ride up the Northern and New Rivers, seeing a wild monkey, and learning about the flora and fauna of the jungle and waterways. Once at Lamanai, we walked through ancient ruins of the Mayas. It is estimated there might have been as many as 1,000,000 Mayas alive and living around 200 or so temples at the height of the civilization; most of the structures are undiscovered and still buried under jungle. On a separate day I visited Xunantunich, another location of majestic ruins. 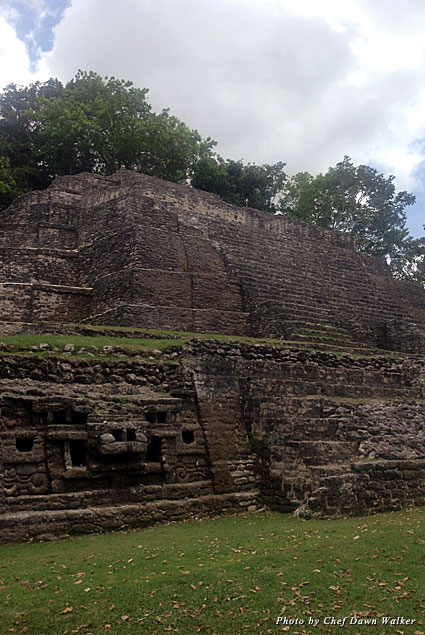 So much of what was left by the Mayas has yet to be excavated and discovered. Driving throughout the country, you could see countless hills covered by grass and trees just waiting to be unearthed and explored. Native and foreign explorers have been discovering new ruins regularly, but the government does not have enough resources to fully uncover the areas and prepare them for tourism. It is amazing how close you can get to the remnants of this ancient society—how pure the sites are, compared to similar ruins elsewhere.

While in Belize I also took a short boat trip to Hol Chan Marine Reserve and Shark Ray Alley where I snorkeled in one of Belize’s oldest marine reserves and swam with rays and sharks in an area where fisherman used to feed the marine life and the fish and sea mammals swim among the visitors without fear. A natural barrier reef containing colorful plant and sea life is just minutes off the coast of Ambergris Caye. The water around Belize is clear and shallow. White sand covers much of the sea bottom, with patches of a short kelp “grass.” The water is clear and the temperature is perfect. 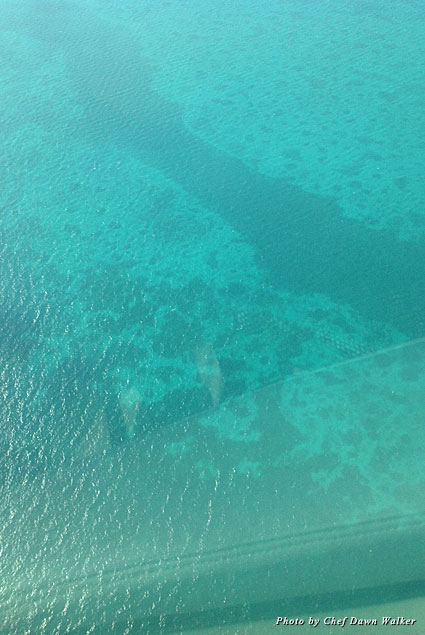 On another day, Gerson sent me on the Ultimate Adventure tour with Chukka. At this natural playground at the Jaguar Paw Outpost, I zip lined from five different platforms, some as high as 500-feet above the ground and among the jungle wild; rappelled a sheer, 150-foot wall; jumped off a boulder into a natural lake; and floated with my headlamp and inner tube through the Caves Branch River, learning about the Maya underworld from Mac, a 100-percent Maya tour guide and medicine man. Despite my fears, I zipped, rappelled, jumped, and floated through the Belizean jungle, stopping only to enjoy the wildlife, history, and plants that make up this ancient land. 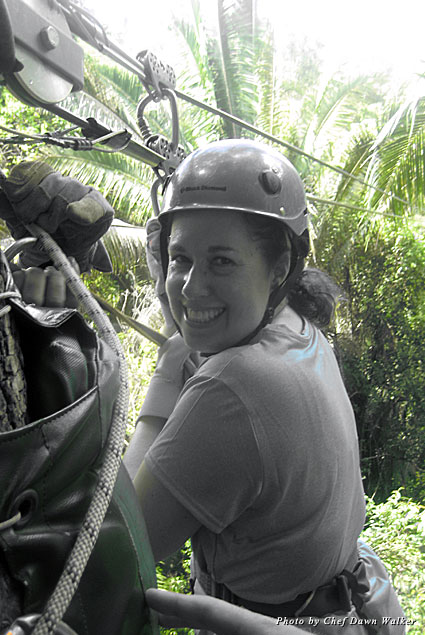 There are many little stores in the downtown area of the island. They have a few larger markets, but stopping by the local farm stands affords visitors the chance to enjoy the fruit that grows from most of the trees—coconuts, bananas, cashews, mangos, and avocados. Off the main road, I happened into one of only two cheese shops in Belize, Wine de Vine, where Fior, the manager, set up a cheese and wine tasting and Sergio and Robin kept me well hydrated and fed. 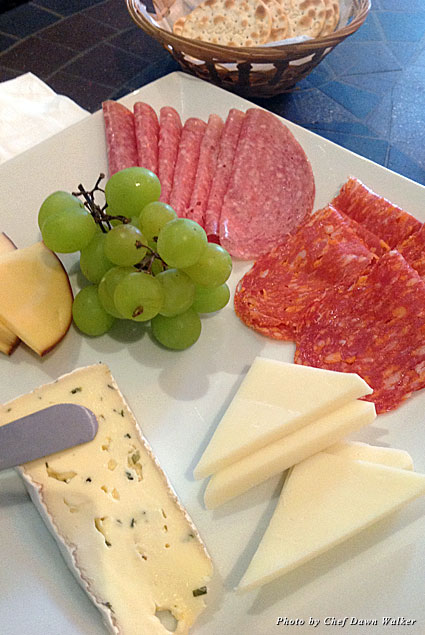 Most of the restaurants in Belize are outdoors, and the staff is exceedingly friendly. At every place I dined, the server asked my name and referred to me personally when serving the table. Blue Water Grill and Hidden Treasure, two San Pedro restaurants, provided me the opportunity to enjoy fresh, local cuisine in a casual atmosphere. The coconut shrimp tower, ribs with a hoisin glaze, and fresh sushi, as well as the fresh focaccia bread and fruity cocktails, were divine at Blue Water Grill. Hidden Treasure, my favorite restaurant in San Pedro, was in a residential area off a dirt road. Rueben and his wife remodeled the first floor of their home and turned it into an extremely successful restaurant. It was so hot out they brought me a cold, wet towel to use to freshen up before my meal. The wine was cold and the food fresh. I loved the tempura-battered shrimp, the fish fritters, and the stuffed grouper. 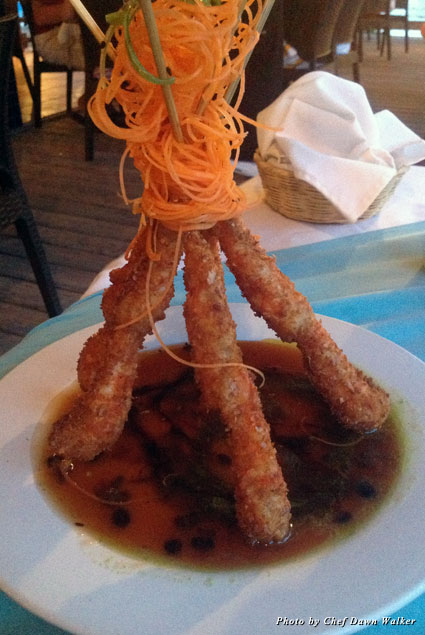 I spent a lot of time talking to Rueben about his purchasing habits. He buys fish from the mainland (which is more expensive) because he believes it is better to the oceans to purchase from fisherman who care about marine life and sustainability. Rueben offers free shuttle service to and from all hotels on the island—and actually does the driving himself to get to know his guests. I truly felt as though I was eating in his dining room.

One of the highlights of my trip was my visit to the Belize Zoo. The zoo houses more than 150 animals, including howler monkeys, tapirs, a puma, a crocodile, a jaguar, eagles, toucans, owls, parrots, and a macaw. Unlike other zoos, you can get very close to the caged animals, much closer than if you were to spot these animals in the wild. 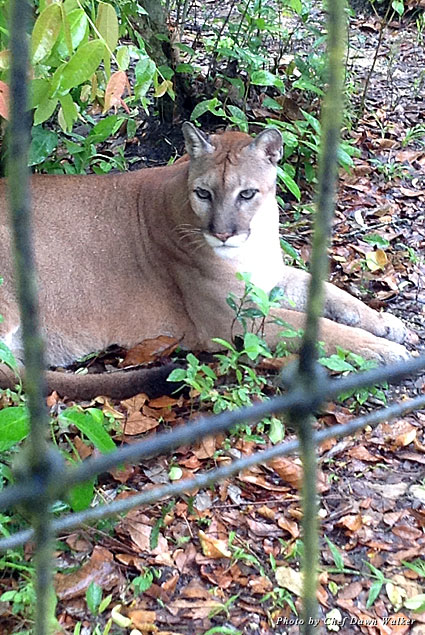 When planning a trip to Belize, try scheduling a visit during the dry season, generally December to May. June to November is wet and subject to hurricanes—not to mention mosquitos. Belize City was just a five-hour plane flight from Los Angeles. The Belizean dollar is double the American dollar, and all commerce is commenced using either or both so there is no need to exchange money when traveling to Belize.

There is a very old and rich culture in Belize. The Belizean people are proud of their heritage and love to share it with visitors. This country is on the cusp of being discovered by travelers; if you travel there now, it feels as though you are discovering something new. I am sure in years to come commercialism and tourism will grow and it won’t feel as though you know something others don’t. I really enjoyed my time on the island and hope to go back with my family. I can’t wait to share the beautiful seas, ancient land, and exotic animal life this country has to offer.