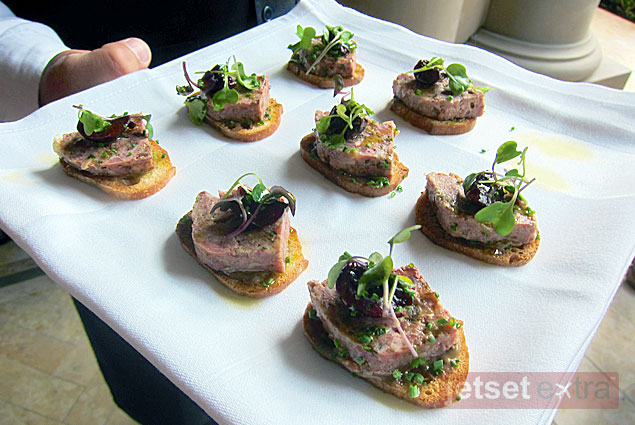 With delicious dining options ranging from street food to five-star restaurants, it’s hard not to find a good meal in Los Angeles. Happening July 15 to 26, dineLA Restaurant Week celebrates all that is amazing about LA cuisine with specially priced, prix fixe menus at more than 330 restaurants. From Long Beach to Burbank, Santa Monica to Arcadia, chefs at some of the hottest restaurants and neighborhood haunts have cooked up culinary creations to show off the diversity of LA’s culinary experience.

A few days before Restaurant Week’s summer session officially kicks off I joined members of the local media at the Montage Beverly Hills to sample dineLA menus from three top participants: Scarpetta Los Angeles, Bouchon Beverly Hills, and Patina Restaurant. We began the evening at Scarpetta, tasting tray-passed chicken liver terrine crostinis and purée of Brentwood corn soup and sipping on chocolate negronis mixed by Simon Ford of The 86 Company. 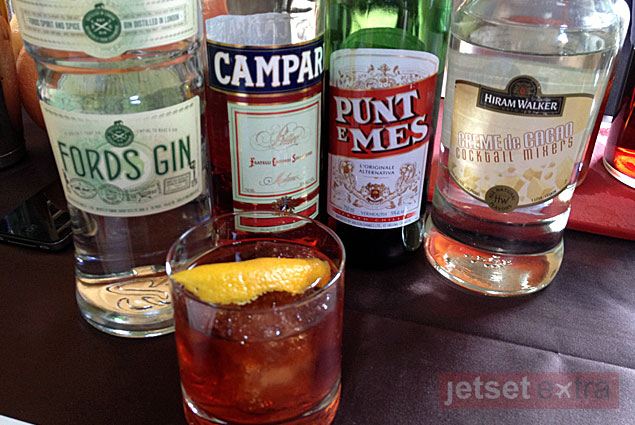 Our hosts, the LA Tourism & Convention Board and the Beverly Hills Conference and Visitors Bureau, invited us to take our seats at a table on the Scarpetta patio as general manager Sandro Coppola and executive chef Freddy Vargas welcomed us to their restaurant and described the tasty treats we had the pleasure of dining on that evening. We then dove straight into the bread baskets, which were marked with white and black napkins to designate a vegetarian option. Non-vegetarian bread? That’s right; in addition to whole wheat focaccia and baby ciabattini rolls Scarpetta also offers Stromboli stuffed with smoked mozzarella, salami, and roasted cherry tomatoes. No wonder it was voted best bread basket by LA Weekly.

Our final dish at Scarpetta for the evening was braised veal and bone marrow agnolotti, one of the piatti (Italian for “plate”) selections on the Restaurant Week menu. For $45, diners can choose a primi piatti of Brentwood corn soup, pork terrine, salad of grilled peaches and ricotta salata, and roasted sea scallops. In addition to the agnolotti—which was delicious, by the way—other piatti options include Mary’s organic roasted chicken, imported octopus, and sirloin of beef. Scarpetta’s famed spaghetti, about which two of my fellow diners had glowing reviews, is available as an additional course for $12. For dessert, Restaurant Week diners can choose between plum crostada with frangipane and toasted almond gelato and burnt honey vanilla panna cotta with marinated berries and sour cherry sorbet. 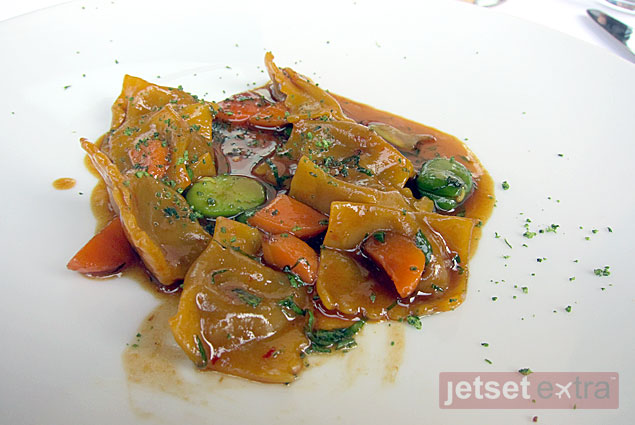 The evening already off to a fantastic start, we moved across the way to Bouchon, where we were greeted with a Daiquiri #4, also known as the Hemingway Daiquiri, from Simon and an introduction from Bouchon general manger Stephen Cook. We were then led into the kitchen and greeted by chef de cuisine David Hands, who invited us to taste small samplings of some of the restaurant’s dineLA offerings: radis au beurre, rillettes au poulet, and tartare de saumon (all amuse bouche options), as well as soupe froide du jour and salade de blé berry from the menu’s entrée section. 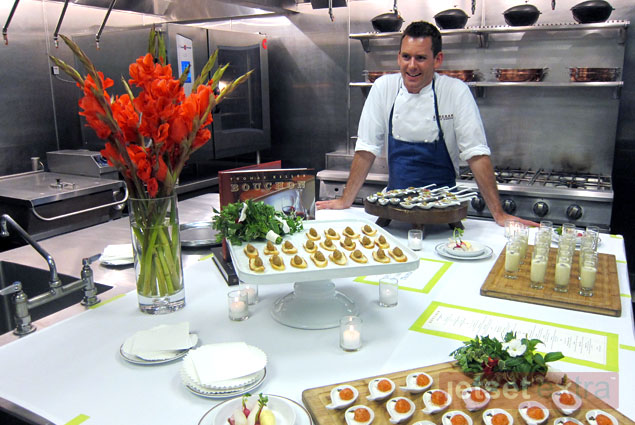 Moving through the kitchen, we stopped to watch Bouchon chefs in action before returning to the restaurant’s bar area where fresh oysters awaited. Chef David explained these oysters came from a woman named Ingrid in Maine; she is one of owner and chef Thomas Keller’s top seafood purveyors (Bouchon is part of the Thomas Keller Restaurant Group). The oysters were carefully scrubbed before opening to ensure each was offered as clean as could be. 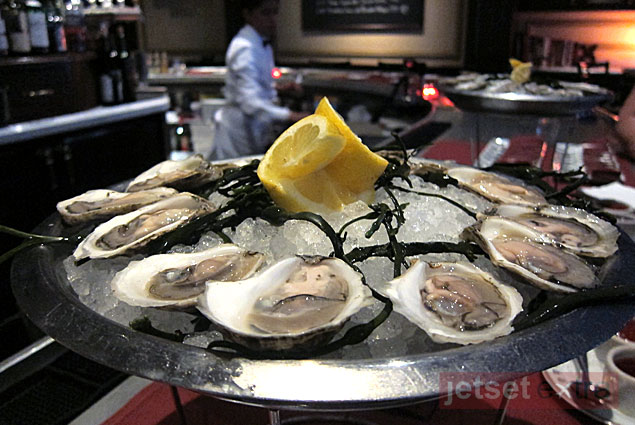 Although Bouchon is part of the same restaurant group that brings us the French Laundry, the restaurant presents itself as an approachable, casual dining bistro that just happens to be located in Beverly Hills. At Bouchon the emphasis is on community and sharing, which we experienced firsthand when we sat down to dinner and the Restaurant Week plats principaux (main dishes) were delivered to the table family-style. Conversation flowed as we dug into fruits de la mer á la Provençale with new crop potatoes, roasted peppers, braised fennel, and shellfish sauce; poulet rôti with fork-crushed red-skinned potatoes, cherry belle, radish, capers, charred romaine, and sauce bagna càuda; cavatelli, rolled pasta with yellow corn, Half Moon Bay mushrooms, spinach, and corn pudding; and steak frites, prime flat iron steak with caramelized shallots and maître d’hotel butter. Bouchon’s Restaurant Week menu is priced at $25 for lunch and $45 for dinner.

Filled with Scarpetta and Bouchon goodness, it was time to wrap up the event with a little dessert. We headed outside to the Montage gardens where chefs from downtown LA’s Patina Restaurant had prepared melon composition, one of the dessert selections on the restaurant’s dineLA menu. Served with crème fraîche, cilantro, and chamomile meringue, the dessert was light and summery and the perfect to ending to an amazing night. 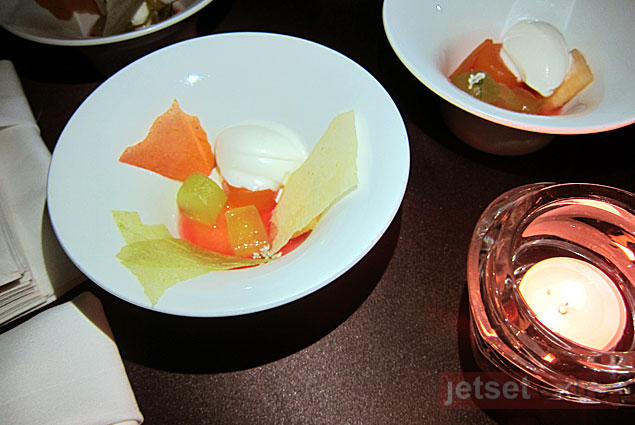